TheLFCFan
1 year
A great month that, especially the Dortmund result! A big month next month in your survival bid, but so far this season, it's going well.
1
Login to Quote

Justice
1 year
I think you have every right to be happy with the season to-date. In a reasonable position to fend off relegation, and constant progression is being observed.
Login to Quote

Jack
1 year
Every point is golden at this stage and that result against Dortmund could prove vital towards the end of the campaign. Fantastic win vs Frankfurt, too!
Login to Quote

In the first of two fixtures, 1860 Munich put in a dominant performance against Hannover 96 led by a brace from Robin Hack in their most impressive performance so far this season. In the second match, 1860 Munich looked the most likely to break the deadlock throughout the match but a goal from Erkan Eyibil in the 93rd minute saw the three points go to Mainz 05. 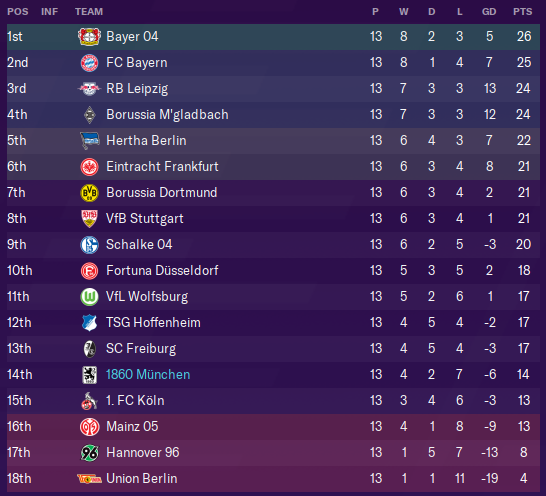 The Bundesliga competition remains competitive with a new leader taking their place at the top each month with only five points separating the top eight sides. At the bottom of the table, two relegation candidates have emerged in Hannover 96 and Union Berlin while several sides remain close to the relegation playoff position. 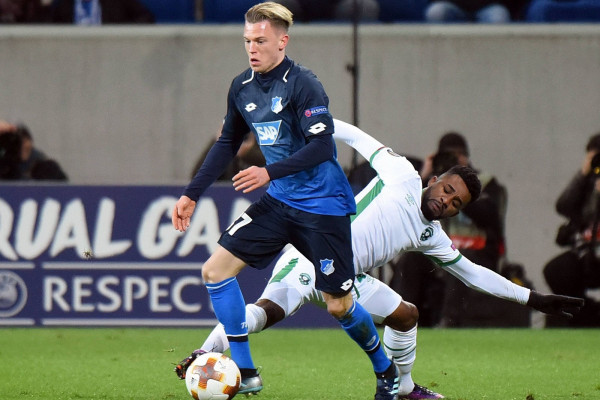 Currently the equal leading scorer for 1860 Munich, the 23-year-old inside forward led his side to victory against Hannover 96 by scoring a brace. He has continually build on his skills throughout the season to prove to be one of the first names on the team sheet for manager Daniel Bierofka.

Continuing with his injury problems, Hoever has sprained the ligaments in his ankle and is set to be out of action for one to two weeks.

1860 Munich will continue to fight against relegation facing two mid-table sides in TSG Hoffenheim and Schalke 04 with a home fixture against Bayer Leverkusen in the middle of the month.

ScottT, TheLFCFan, Justice & Jack: After a poor start, I am thrilled we have been able to slowly improve.
Login to Quote

TheLFCFan
1 year
Gutting to lose out to Mainz, as those extra points will most likely have come in handy next month, which looks like it is going to be incredibly tough. Either way, still outside the relegation zone, and that is certainly the seasons aim.
1
Login to Quote

Jack
1 year
Three points is always important for a team in your position, but allowing Mainz to come back and be one point behind you rather than you getting all the points could cost you later.
1
Login to Quote

ScottT
1 year
Echoing the words of Jack. A huge step forward with a victory against Hannover isn't capitalised on with a further point against Maiz. Hopefully this consistent can be yours soon.
1
Login to Quote

Aaron
1 year
Very tight at the top, bayern have their work cut out!
1
Login to Quote

December got off to a tough start for 1860 Munich, losing heavily against both TSG Hoffenheim and league leaders Bayer Leverkusen. Die Löwen would then upset Schalke 04 to finish the month with goals from Lisandru Tramoni and Musa Barrow sealing a 2-1 victory. 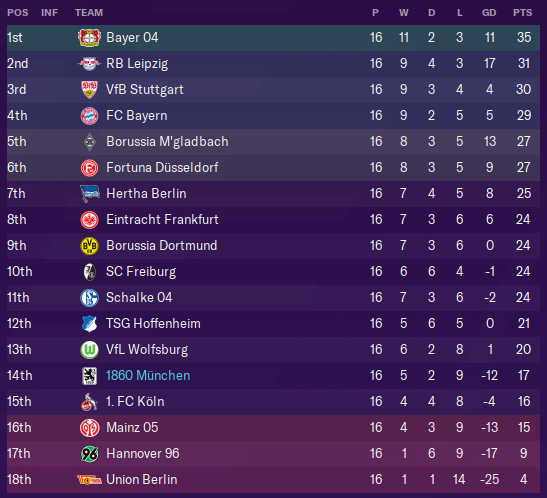 Bayer Leverkusen hold a four-point lead at the top of the Bundesliga table after sixteen matches with a number of strong sides trailing close behind. 1860 Munich find themselves just outside the relegation zone, battling against FC Koln and Mainz 05. 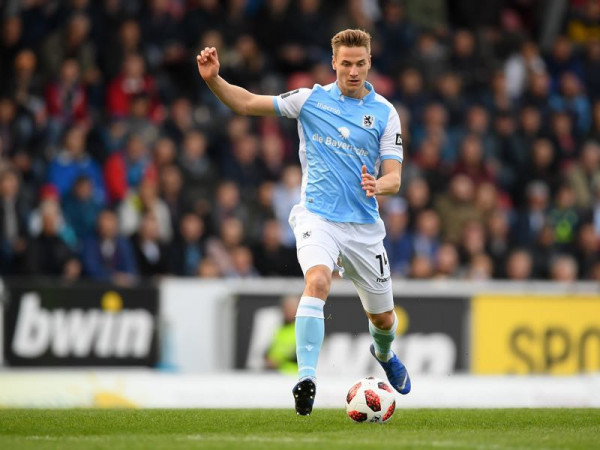 Proving to be the heartbeat of the midfield for 1860 Munich, the deep lying playmaker created chances and made vital interceptions throughout December. The 23-year-old has improved remarkably throughout the season to become a better all-round player.

A very tough run of fixtures awaits with 1860 Munich set to face four teams who are battling for European qualification. Die Löwen will be hoping to take advantage of playing at home with three of the four matches to be played at Grunwalder Stadion.

TheLFCFan, Jack & ScottT: The loss to Mainz was heartbreaking, hopefully we can make up for it

Aaron: The competition is certainly competitive at the top of the table
Login to Quote

ScottT
1 year
A massive win against Schalke. If you can obtain results against Dusseldorf and Stuttgart, you will leave yourself in a good position in your bid to survive. Every point really matters.
1
Login to Quote

TheLFCFan
1 year
A tough month but a huge win to see out the month, keeping you outside the relegation zone. Hopefully some good performances next month can see you break clear of that group.
2
Login to Quote

Jack
1 year
Really need to be getting more clean sheets, leaking goals like that is giving you no chance against the bigger sides. I hope January is used to tighten up the defence!
Login to Quote

It was a mixed bag of results for 1860 Munich in January, starting with a 3-2 victory including a brace from Lisandru Tramoni in his most impressive performance for 1860 Munich so far in his career. An early lead against RB Leipzig was run down quickly in a heavy loss at home against the league leaders.

Musa Barrow led his side to victory, scoring a hattrick in the big 4-2 win against Fortuna Dusseldorf before finishing the month against VfB Stuttgart, going down by a two goal margin. 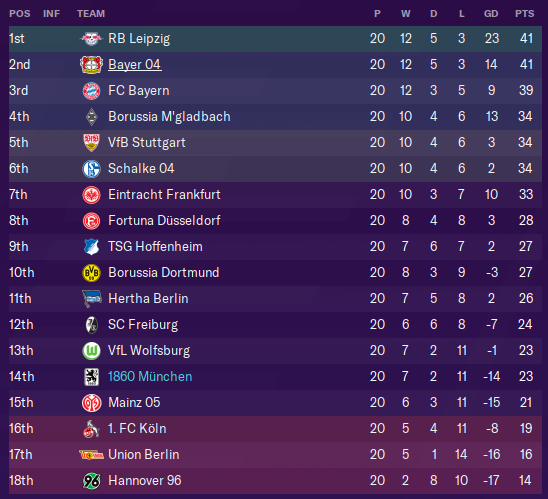 RB Leipzig currently share the top of the table with Bayer Leverkusen while Bayern Munich find themselves only two points behind the leaders. At the bottom of the table, Union Berlin and Hannover 96 both put together a good sequence of results to close the distance on the teams above them. 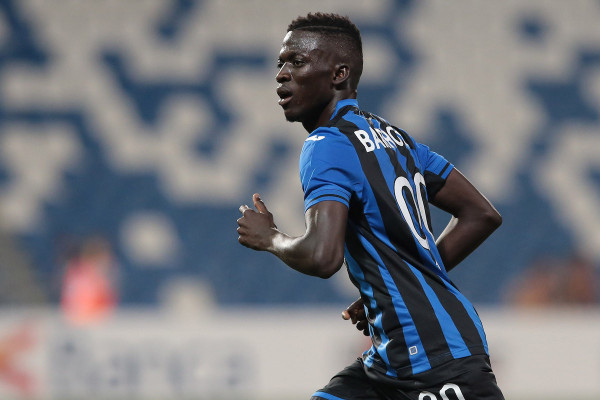 Scoring five goals in four games including a hattrick against Fortuna Dusseldorf, Musa Barrow has found his feet at his new club and is reaping the benefits.

After his form in January, the Gambian international has moved into the top five goal scorers in the Bundesliga and is expected to be on the radar of many European clubs in the off-season.

Recovering from a knee ligament issue, Robin Hack will miss the DFB-Pokal fixture against Hertha Berlin but may return for the match against VfL Wolfsburg.

Starting with the DFB-Pokal third round fixture against Hertha Berlin, 1860 Munich face three opponents currently in the bottom half of the table in VfL Wolfsburg, SC Freiburg and FC Koln with a tough fixture away from home against fourth placed Borussia Monchengladbach.

ScottT: Really happy with the victory over Schalke but just lacking consistency in performances currently

TheLFCFan: I certainly hope we can string a few results together

Jack: Unfortunately we have no funds available to help improve the defence in January
Login to Quote

ScottT
1 year
Inconsistency is bound to be the case this season, but you're getting the odd win that should see you through and ensure you survive which is a terrific achievement. A big month ahead though!
Login to Quote

TheLFCFan
1 year
Barrow has been great this year to be in the top five scorers for a team in a relegation scrap. The upcoming month is massive for 1860. A few wins against some teams around you could see you really move away from that relegation zone. Good luck.
1
Login to Quote