ScottT
1 year
All that matters is that you're there to compete in the top-flight again next season. That budget will be a massive aid when looking to improve a rather lacklustre defence.
1
Login to Quote

TheLFCFan
1 year
Good job on staying up mate! That money needs to be spent on some big improvements to avoid a last day fight next season. Look forward to seeing what you can do with it.
1
Login to Quote

Continuing their poor run of form to finish the season, 1860 Munich were defeated twice in May. Osei Owusu missed a late chance which would have seen his club earn a drawn against Schalke 05 while 1860 Munich were dominated from start to finish against Hertha Berlin. 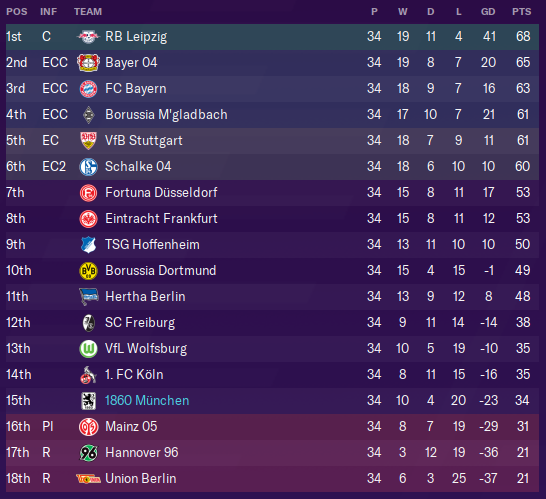 RB Leipzig claimed the Bundesliga title, sealing the title with a dominant 5-0 victory over the relegated Hannover 96 who will join Union Berlin in Bundesliga 2 next season. 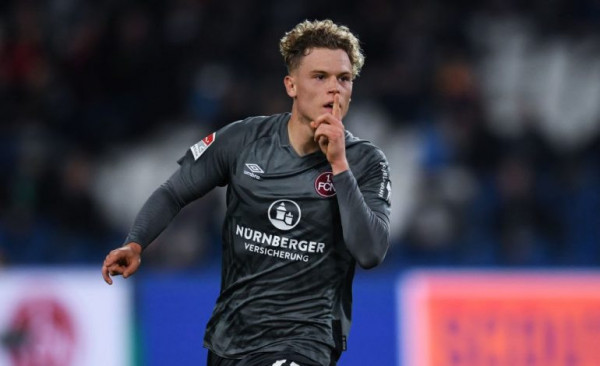 Enjoying a solid month, the 23-year-old was instrumental in both goals against Schalke 04 while also performing well against Hertha Berlin. 1860 Munich manager Daniel Bierofka faces an interesting scenario with rumours that Robin Hack is looking for a new challenge as well as greater opportunities to win trophies.

Injuring himself against Schalke 04 after producing two assists, Steinhart will require one to two weeks of recovery from a fractured toe.

Continuing to complete rehabilitation from his achilles injury, Moll is still three to four months away from returning to training.

Justice: That is a wheelie bad nickname...

tedbro20, Eion97, ScottT & TheLFCFan: There is no doubt that defence is where the money will be spent in the off-season
Login to Quote

ScottT
1 year
Leipzig as champions, disgusting. Hopefully you can tempt Hack to stay. If not, extracting the most amount of cash possible would be the perfect scenario.
1
Login to Quote

Justice
1 year
It is something to build on next season.
1
Login to Quote

Eoin97
1 year
Alot of work to do to stay up for another season, but with an ever improving youthful 1860 Munich side, it might be a bit more of an easier ride next time out. And I know RB Leipzig are a club hated by many because of their creation and philosophy at the very top, but it's a team that are doing things right on the pitch and it's still more refreshing than seeing Bayern win again and again.
1
Login to Quote

TheLFCFan
1 year
A good season all in all. An interesting table there with Dortmund so low down!
1
Login to Quote 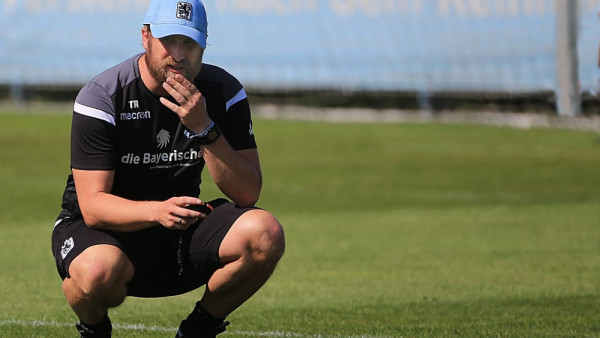 In a season where his club defied all expectations by avoiding relegation, 1860 Munich manager Daniel Bierofka has been named the 2021/22 Bundesliga Manager of the Year. The 43-year-old claimed the award with SC Freiburg’s Christian Streich and Fortuna Dusseldorf’s Steffen Baumgart coming in second and third respectively.

Playing an entertaining brand of football with his high-tempo pressing style, scoring more goals than any of the bottom seven sides during the course of the season. Bierofka has built a squad of young players and developing them at the club while in charge of 1860 Munich for the past five years, currently holding a 50% win percentage.

“It is a great honour to win this award in one of the leading competitions in Europe, I am truly humbled.” said Bierofka. “The players and coaching staff deserve all the credit, they have not only bought into the systems in place but also helped in the development of them.” he added.

Hertha Berlin and TSG Hoffenheim have already approached Bierofka about taking over as manager of their clubs, but it is expected clubs across Europe will now show interest in the German manager ahead of the 2022/23 season after receiving this award.

ScottT: Hack is capable of producing big moments but is not consistent, I don't feel he will get much interest from other clubs

Justice: That is certainly what I intend on doing

Eion97: The squad Bayern Munich have is incredible, they just don't seem to perform like they should

TheLFCFan: I was doing some reading on Reddit and it seems everyone doing Bundesliga on FM20 is finding the same inconsistencies in expected team performance in the division, it’s certainly interesting
Login to Quote

Eoin97
1 year
Bierofka, a legend in the making!
1
Login to Quote

ScottT
1 year
I certainly didn't expect this but it is somewhat deserved in fairness! I'm not surprised that there is interest in his services.
1
Login to Quote Musa Barrow has made an immediate impact for 1860 Munich with his physical play in making opportunities for himself through his pace, acceleration and strength. After moving to 1860 Munich at the start of the season, the Gambian international has settled at the club after learning the language and establishing himself as one of the highly influential players at the club. 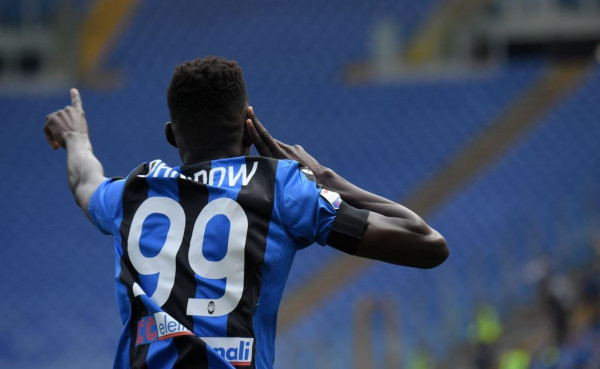 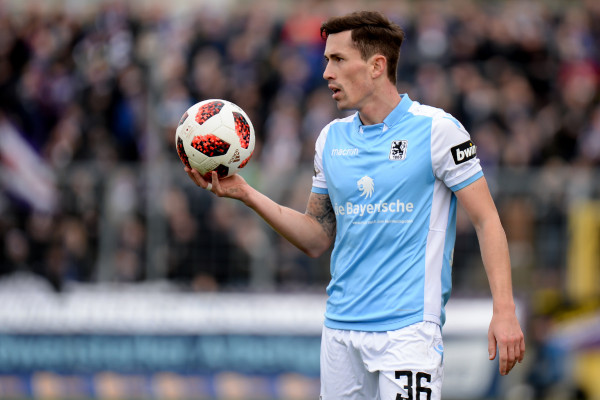 Producing thirteen assist, Phillipp Steinhart has beaten his assist tally from each of his two previous seasons. The 29-year-old had played 310 matches in the Bundesliga 2 and below in his career before making his Bundesliga debut and has continually defied the expectations of the fans and media.

Despite his solid performances going forward, the left back has looked vulnerable at times defensively, leaving 1860 Munich manager Daniel Bierofka with an interesting decision as he re-evaluates his squad for the 2022/23 season. 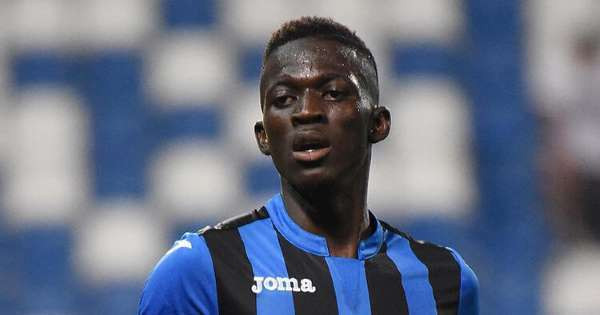 After an impressive season where he claimed many of the honours at the 1860 Munich Awards Night, the 23-year-old still has room to grow as a footballer. Musa Barrow has not only established himself as one of the most promising players in the Bundesliga but has also established himself as one of the leading players for his country Gambia throughout the season.

Eion97: Working on it

ScottT: I honestly did not expect to be able to cross it off on my goals for another three seasons

TheLFCFan: I certainly hope so
Login to Quote

Eoin97
1 year
Musa Barrow, the Gambian Gunner, has just embarrassed everyone else at the awards night with the amount he has won. What a player! Also nice to see a dedicated 1860 Munich player chipping in, after over a quarter of a century of performances in the lower leagues. (Also in Musa Barrows first pic theres a black dot, I kept trying to rub it off my screen)

Justice
1 year
Musa needed a wheelBarrow to bring all his awards home.
Login to Quote