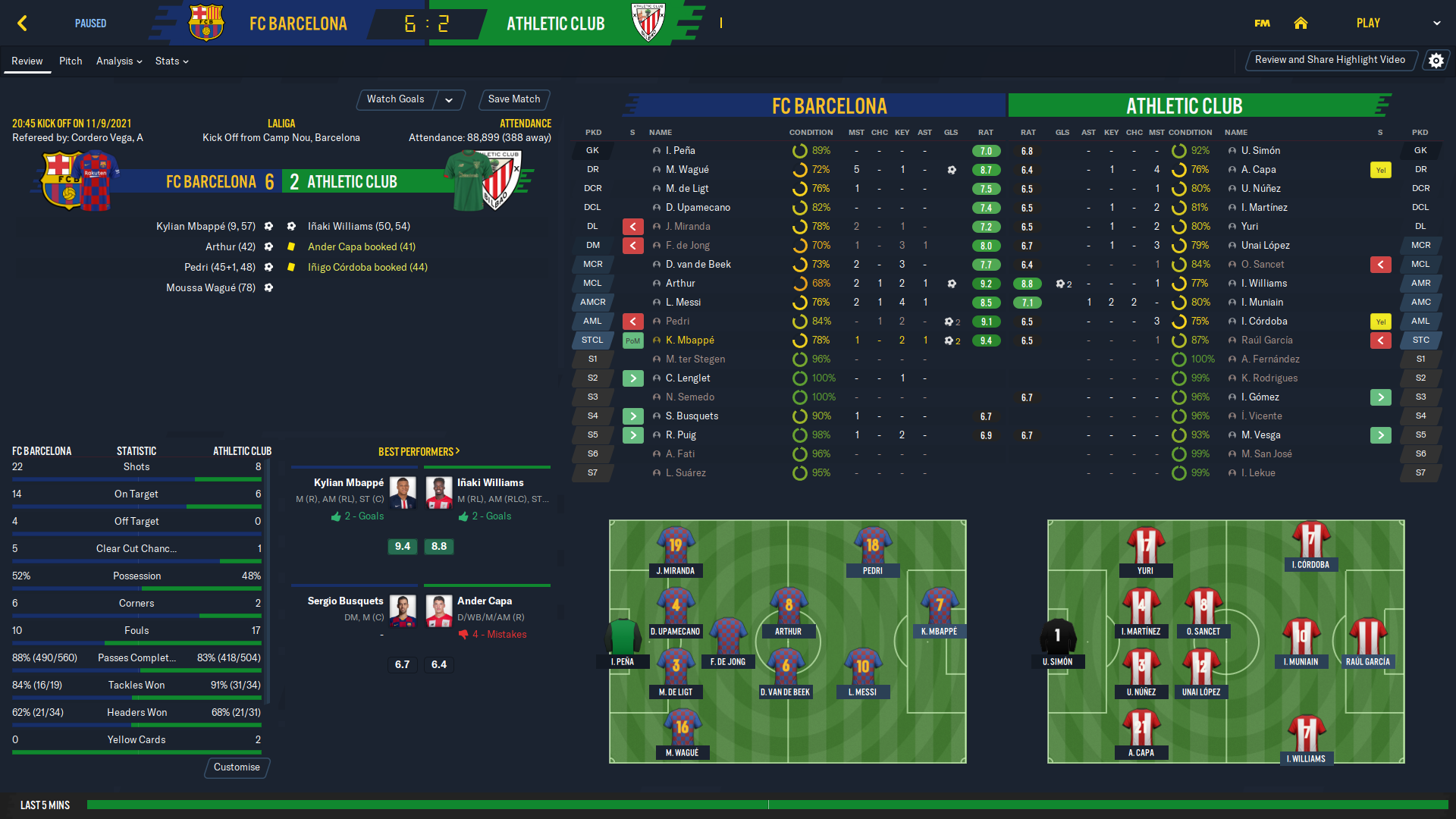 The month started with one of our best every performances! With the front 3 playing at that level we started the month 3 points clear of Real M after their late defeat.

It would prove to be the highest moment of September with a respectable draw at Porto, closely followed by dropped points at Girona, due to heavy rotation for the El Clásico! 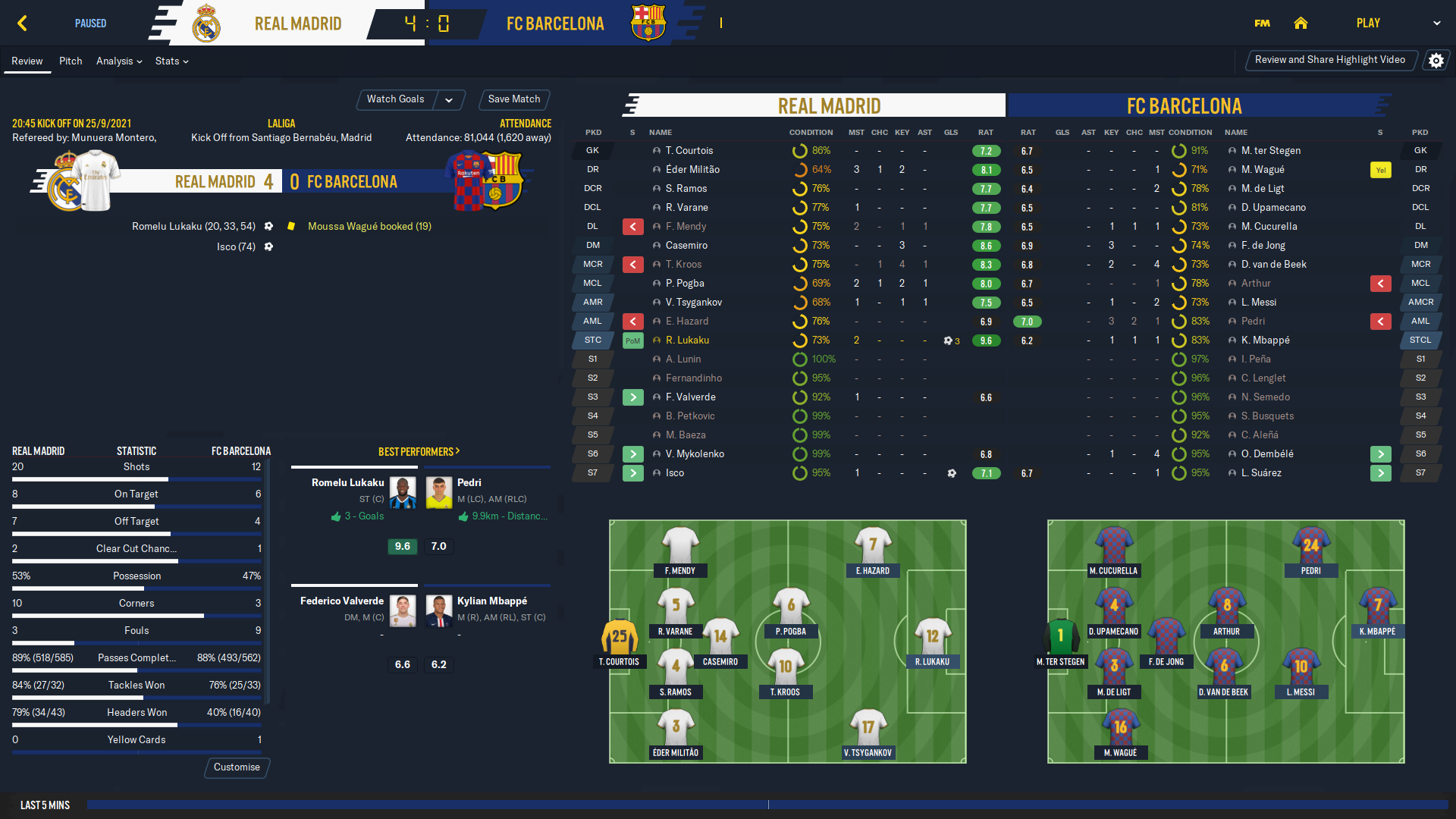 But this one was more than that. Barcelona were completely humiliated with their heaviest defeat since 1995!
1 win in 4 meetings against Real M for Fornas.

Borja Fornas – I'm speechless. I take full responsibility for defeats like this and for now I can't explain what went wrong for us, though I will say this results makes us work harder for the next game. Today is the worse moment of my career and I must use this to push the players back to what we did previously. For the time being we will feel the emotion of what has happened, but then we will be back out training and putting things right. 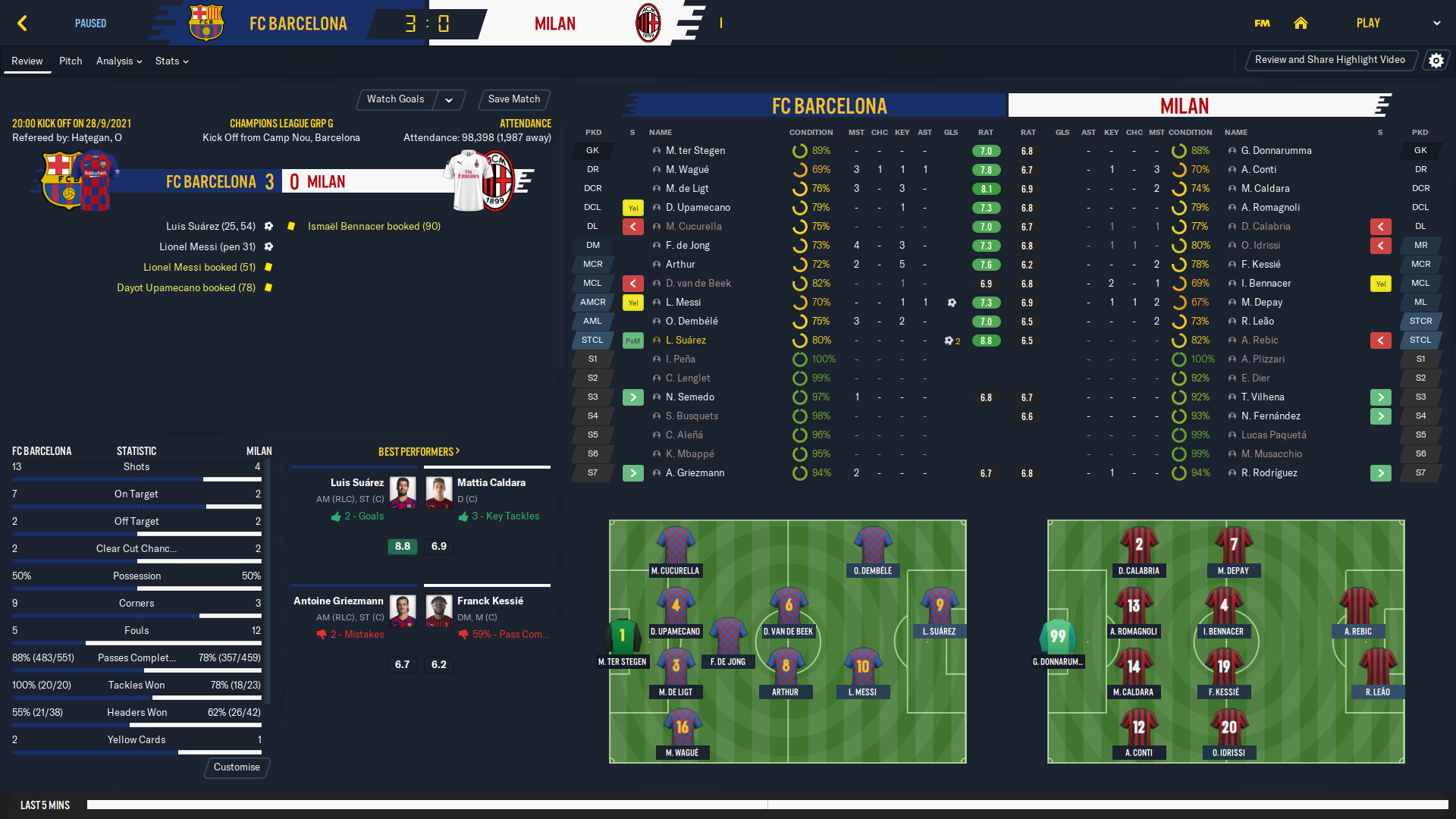 The month ended on a comfortable win against the giants Milan, but that Madrid defeat will leave a sour taste in the mouth for a very long time.

Jack - Even this early on he is performing at a level that justifies the price paid.
Login to Quote

Justice
2 years
That El Clasico result will have hurt but it's good to see you bounced back against Milan! The players will be hungry to succeed against RM next time!
Login to Quote

Zidane knows how to beat us and it's really annoying 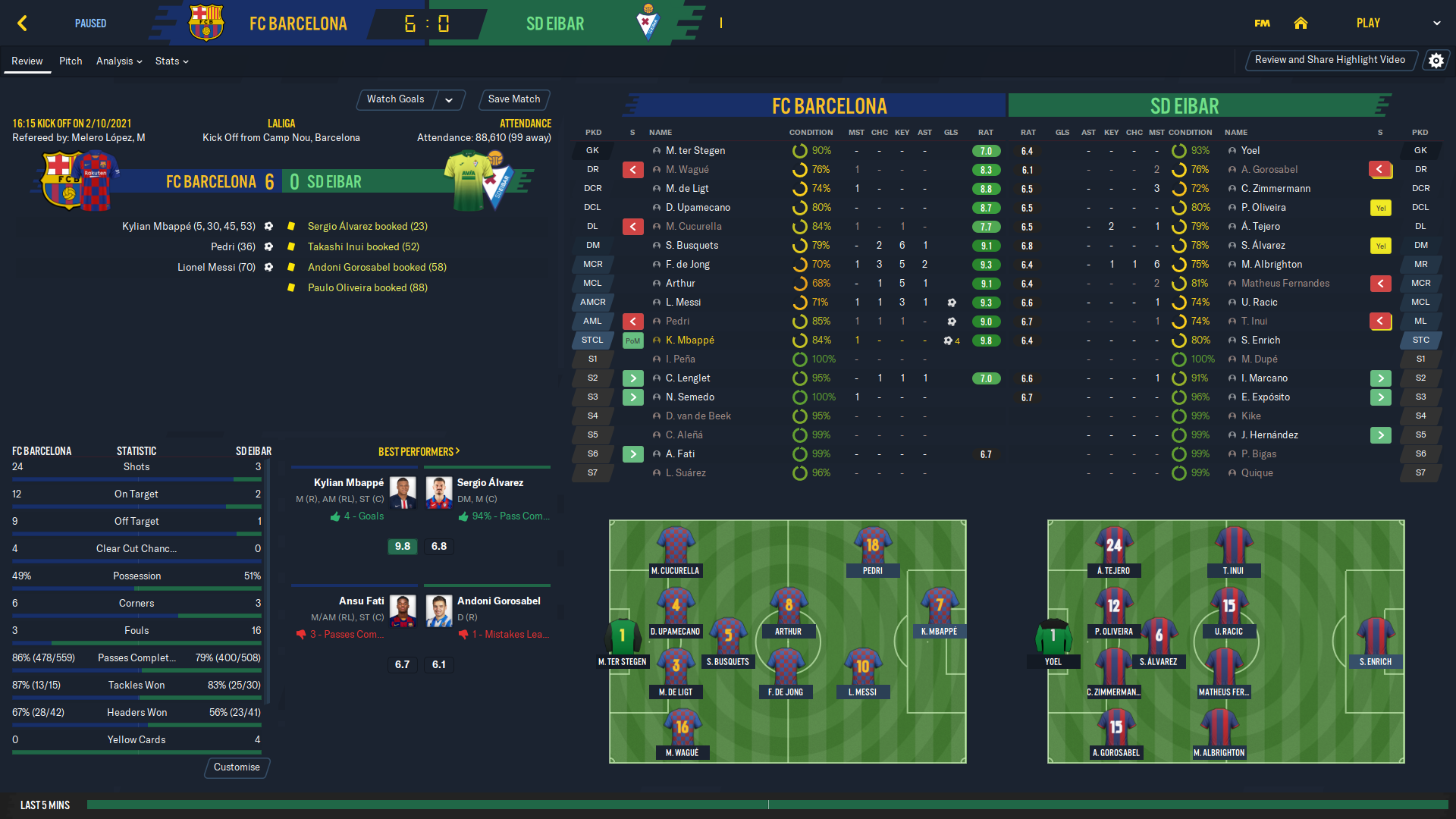 We start the month just like the last with a stellar performance by the front men, especially Mbappe! He is incredible.
And at least this time we carried it on throughout the month. 5/6 clean sheets is exactly what we needed at that horrible game last month and 7 points from 9 with the Copenhagen return at the beginning of next month, we look clear in CL progression too! 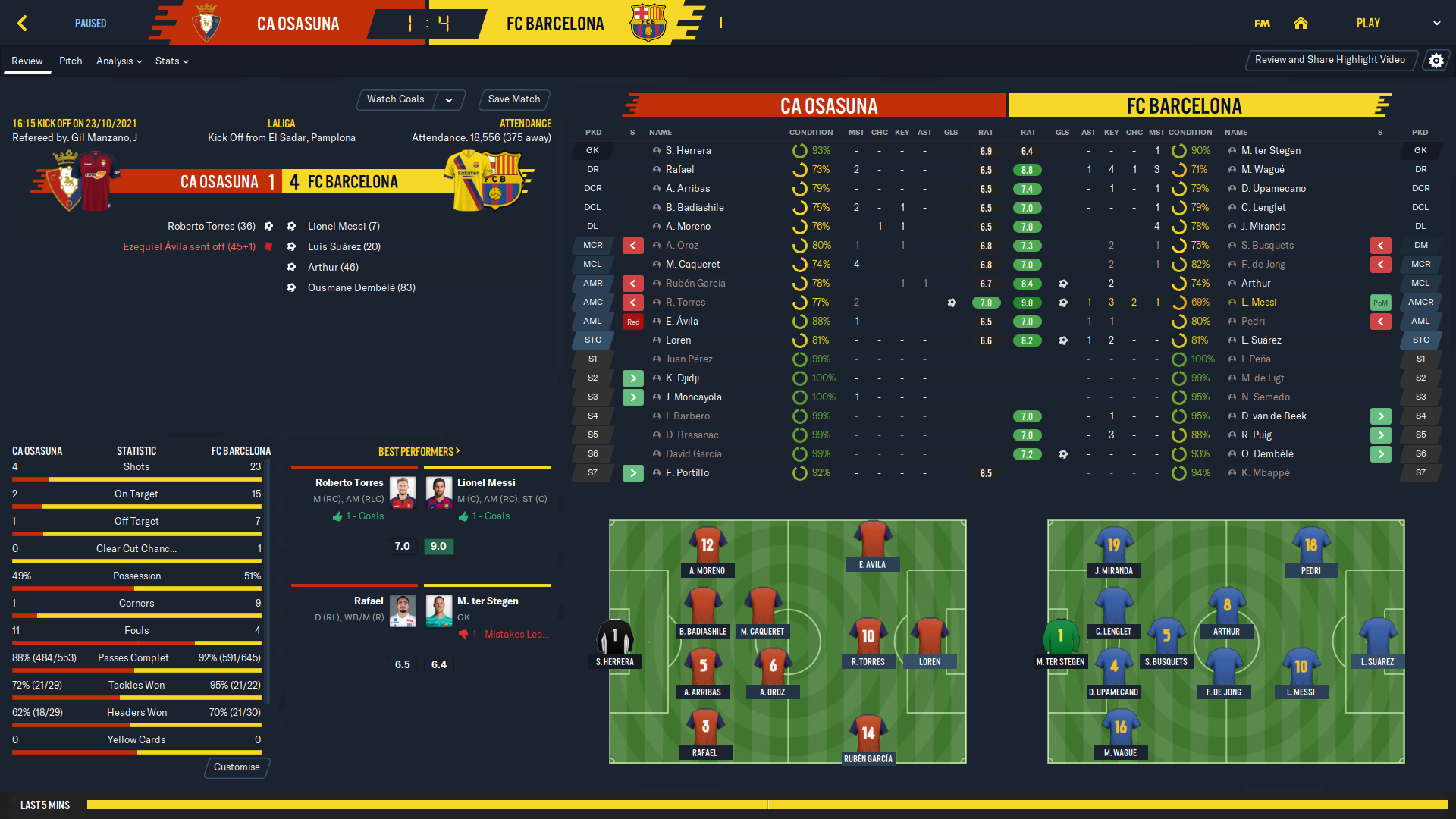 Borja Fornas – Our performances recently has helped us to heal from what happened in Madrid. We still dwell that results but now have the evidence that we have moved past it and are in a better place than a few weeks ago.
This is the standard we have set and there is no reason to drop our form as we have another 2 away games coming up. We want this to be the turning point of our season and it can only be up to us to continue doing things right.
Login to Quote

ScottT
2 years
That's how you recover from a truly shambolic result in all honesty. Much, much better!
Login to Quote

JmG88
2 years
Unfortunate in El Classico but performances coming back from that have been outstanding!
Login to Quote

Barcelona make it 11 wins from the last 11 matches!
For the 3rd successive time Barcelona start the month with 6 goals! 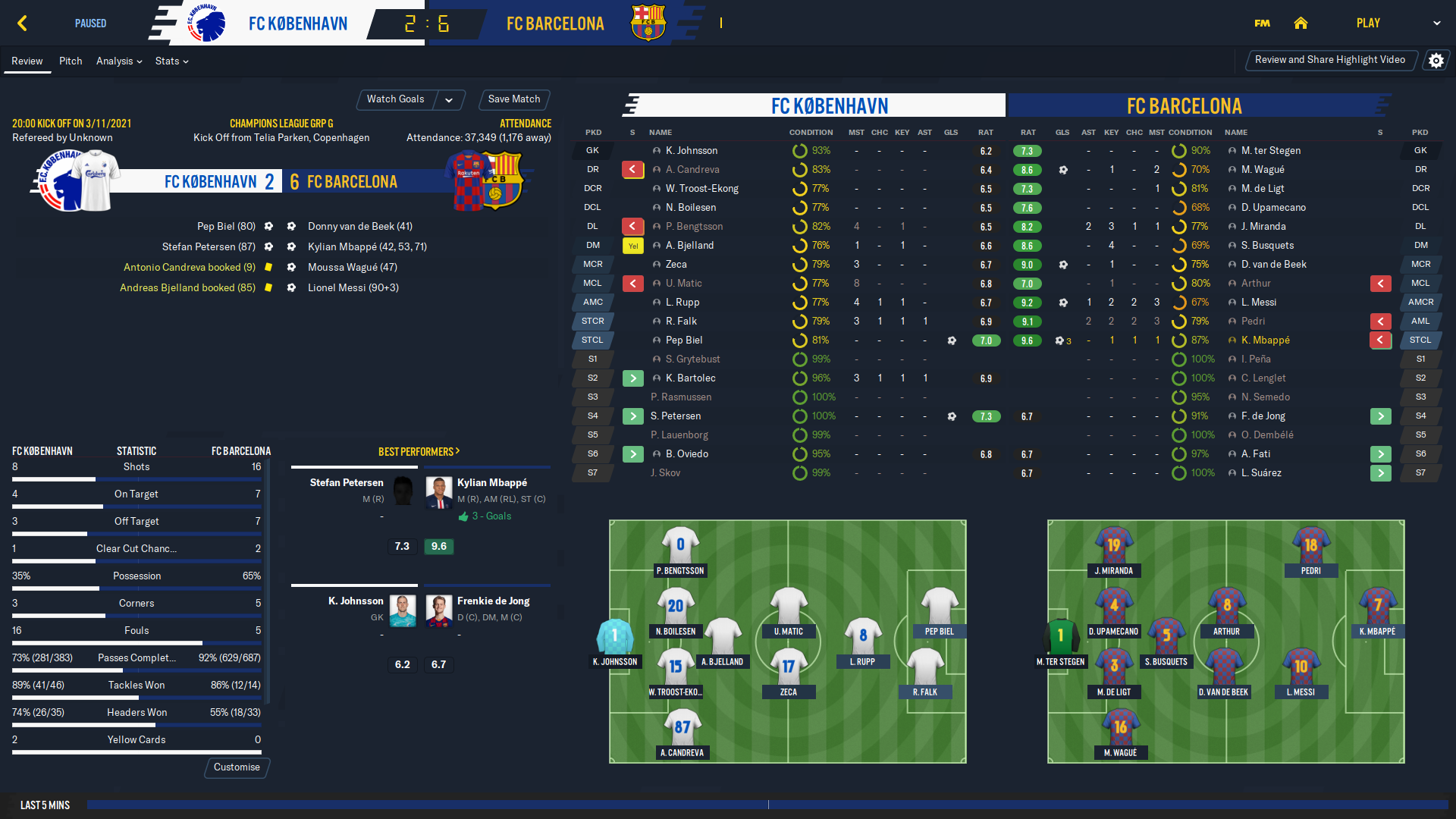 Results in the CL mean Barcelona have progressed to the last 16 with a game to spare vs Milan.
1.Barcelona 13pts 2. Porto 7pts 3. Milan 7pts and Cobenhagen 1pt
Milan lost 3-0 away to Porto but won 4-2 at home, which still puts Porto ahead on H2H meaning the Italians need Cobenhagen to get something out of that tie. 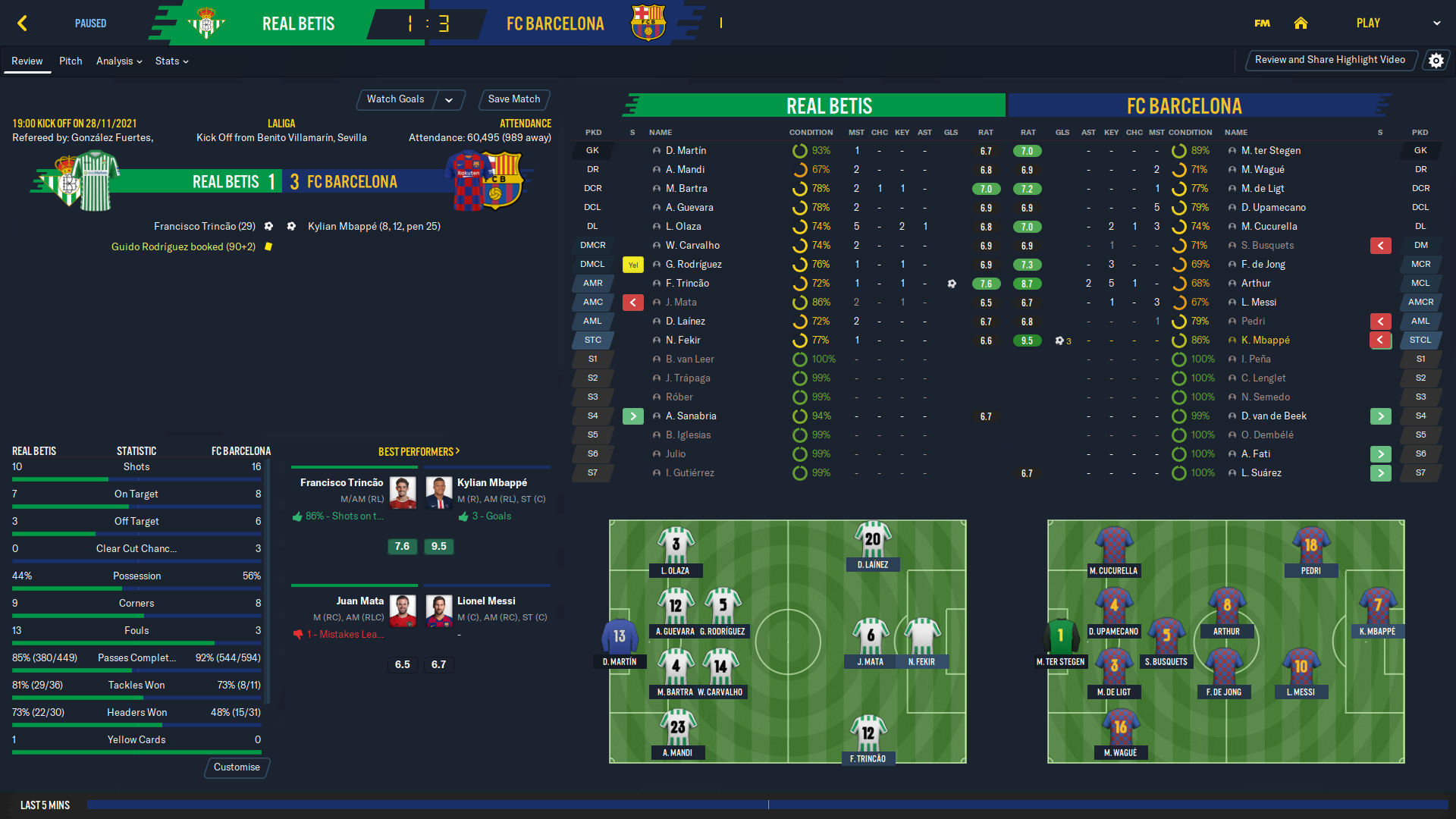 In La Liga despite the 2-2 vs Valladolid, Sevilla are Barcelona’s (38pts) closest challengers with 35pts after 15 games, Valencia come in 3rd with 32 and Real Madrid with 4 wins, 3 draws and 1 defeat since beating Barcelona 4-0 make up the top 4 on 31!

Unbelievably bad form from Madrid with that eye watering 5-1 home defeat vs City putting them on the verge of a CL exit at the group stages!

Borja Fornas – Successive months we have been nearly perfect in all areas of the pitch. What we have shown over these weeks is that we have improved from last season, as good as that was. We have better goal scoring potential this time around, with goals coming from all areas for the pitch. Next month we have a lot less games so we can put even more in to each one to continue this run. Nobody here will accept anything less than what we have done in the last match we always want to improve.

November - will see Barcelona face off against Villarreal, Valencia, Milan (CL) and Alavés.

JMG88 - That result has helped push us to another level!!!
Login to Quote

ScottT
2 years
A bit of a collapse from Madrid and some formidable form from Barcelona has the table reading nicely for the latter and not so much for the former!
Login to Quote

Justice
2 years
Mbappé proving his worth. Could he go on to eclipse Messi's scoring records? He's at the right place to do it.
Login to Quote 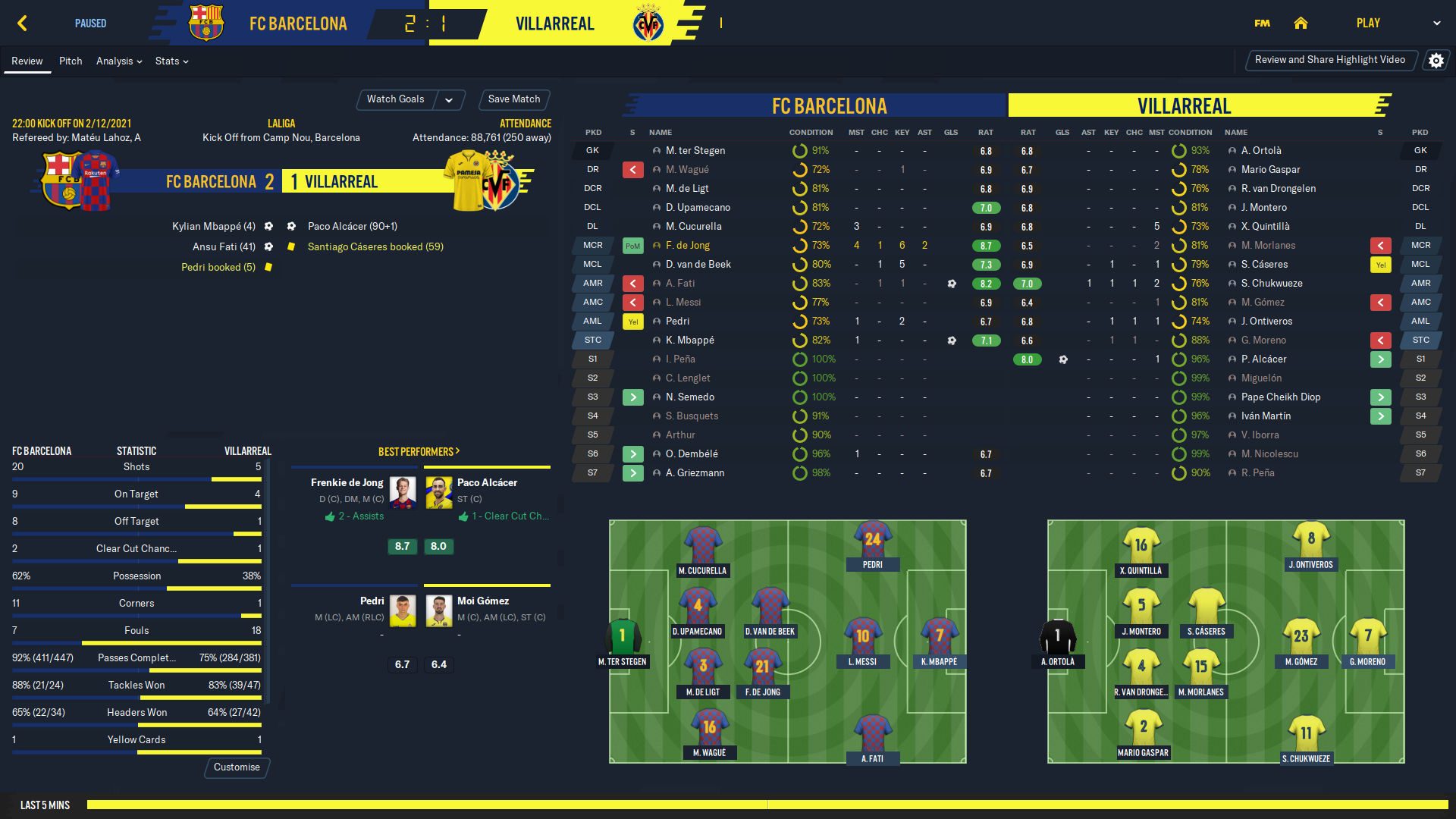 A dominant display by the home side who continue their mesmeric run through the season. It should be said Villareal find themselves low down in La Liga this season and the next game would set a real marker against Valencia, who go into that game on the back of a loss against Sevilla!

5/12
Just 4 hours prior to Barcelona’s crucial home game vs Valencia the club announce Borja Fornas has signed a contract extension until 2026!

Borja Fornas – “It means everything to me that the club has made this decision at this stage of the season. I think this shows everyone the trust we have in each other, what we have built and continue to build with the new board will set the club up for years after I have left.
I’m proud to call myself a Barcelona fan and although I am truly delighted, we must fully focus on Valencia.” 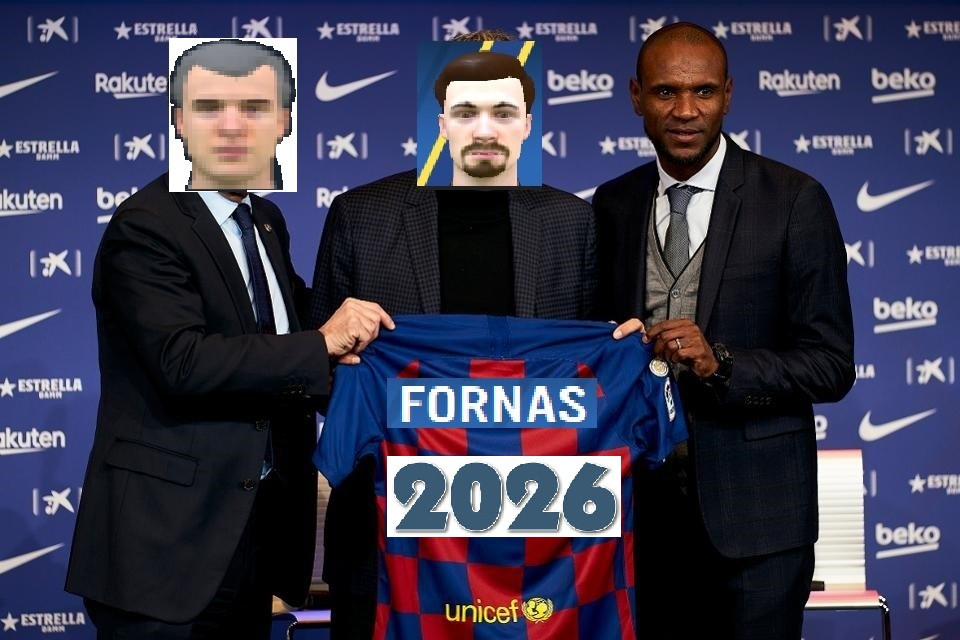 Iván Álvarez (President) – “What we have seen from Borja and his staff over the past year and ½ has left us with no option but to reward his effort and allow him to commit to this club for the next few years.
We felt the time was right to show everyone involved with the club that we are committed to this project and fully support his decisions. The team is playing at the best level in Europe and we want to continue to improve this club wherever possible.” 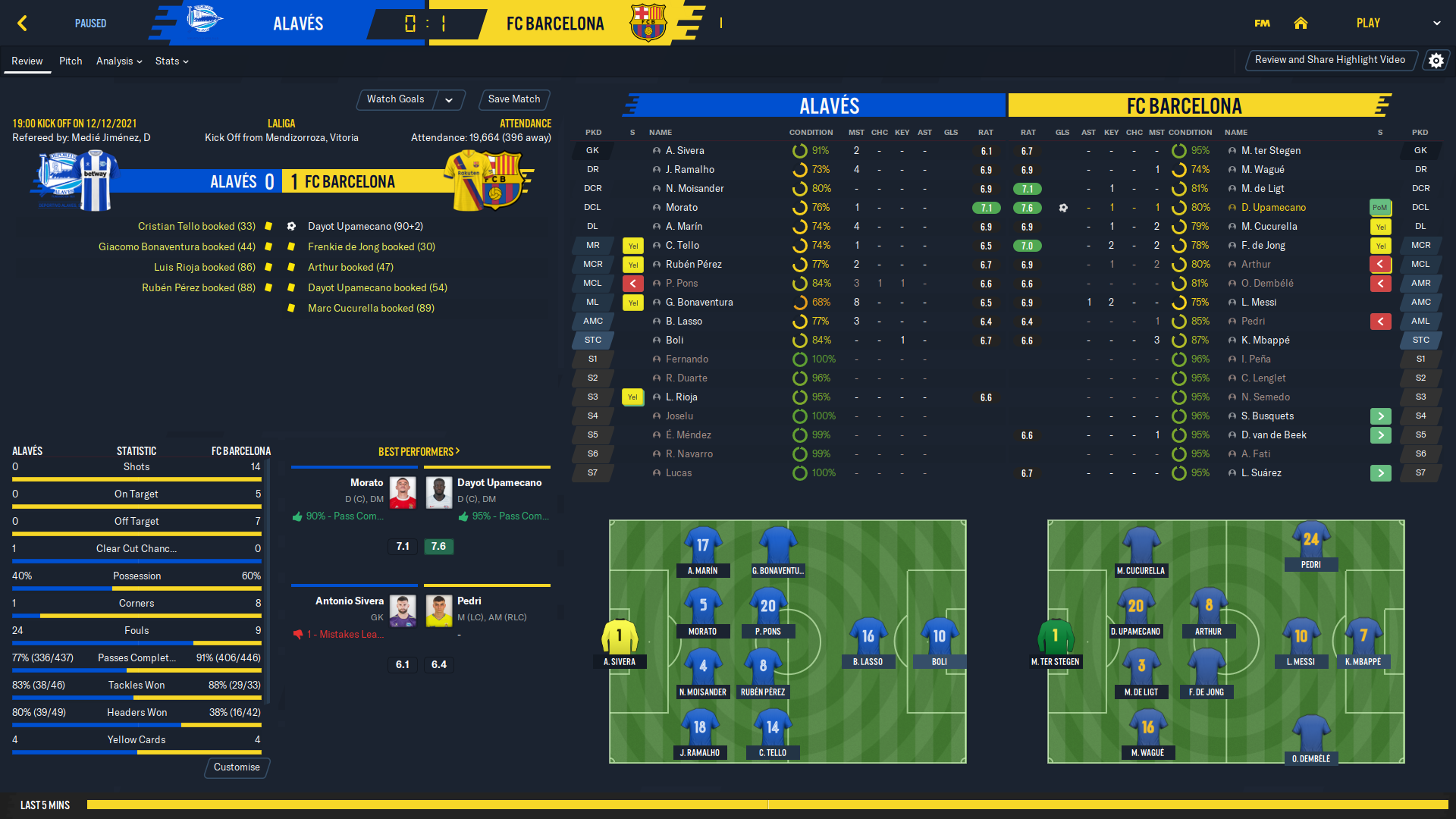 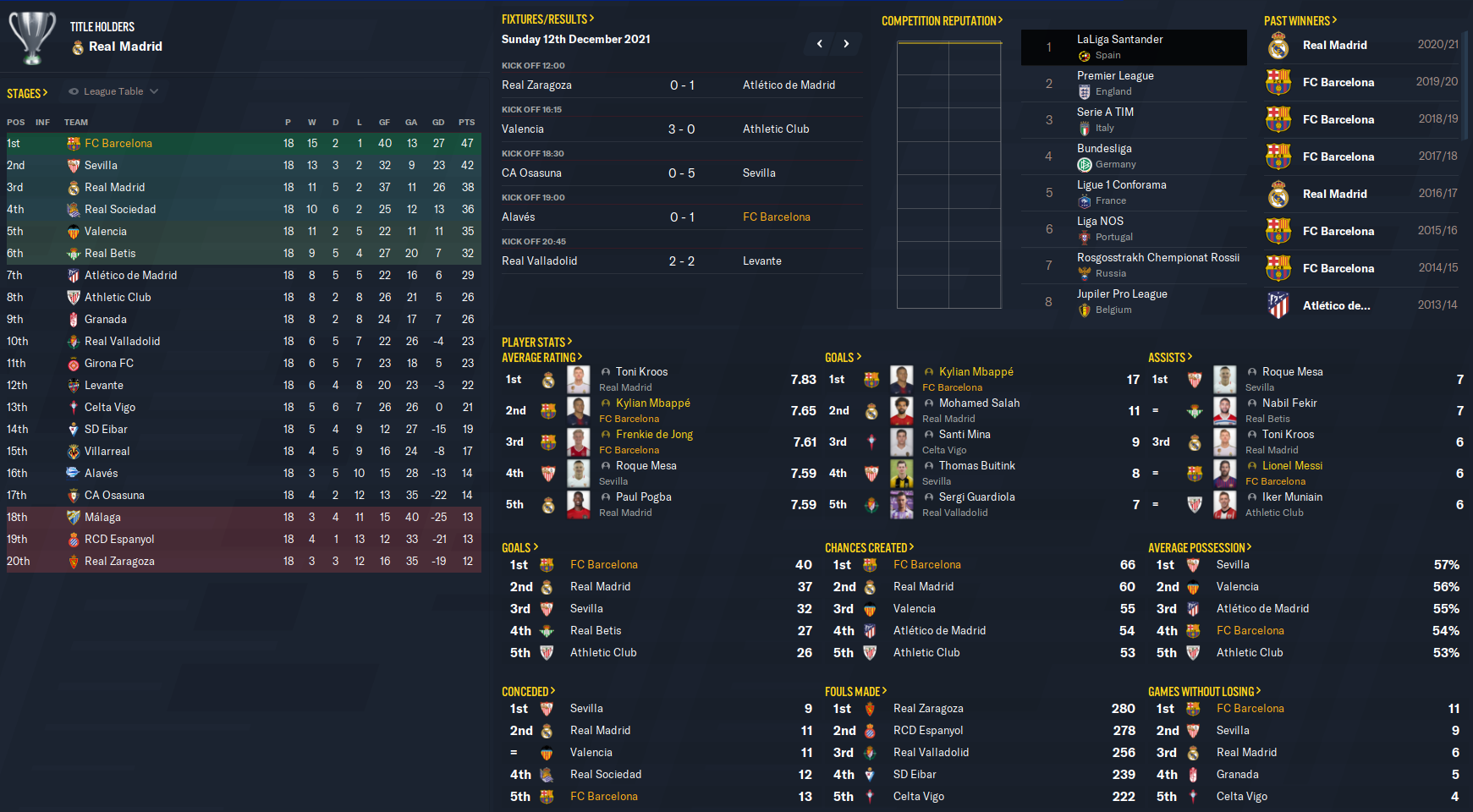 That late goal in a dominant display proved to be huge, with Barcelona moving 5 points clear of Sevilla at the Christmas break!

1st in the group stage has given us the glamour tie of Borussia Dortmund in the Last 16, which is surely the tie of that round.

For the Christmas present that many fans around the world dreamed of...

Real Madrid fail to make it out of their group for the first time!
It is now a waiting game to see if Zidane will be sacked. It's pretty likely considering managers of this club have been sacked just days after winning this competition.

ScottT - We love to see it!

Justice - Good luck to the lad is all I can say.
Login to Quote

ScottT
2 years
A well-deserved contract extension for Borja. Madrid have really flattered to deceive this season but not making it out of the group entirely is a huge low. Dortmund should present Fornas's side with a more comfortable route into the next round.
Login to Quote

Kylian Mbappé wins his first Ballon d'Or aged 23!
The form he has shown since joining Barcelona seems to be what swayed it for the voters.
At only 23, this could well be the beginning of a domination of world football for the Frenchman. 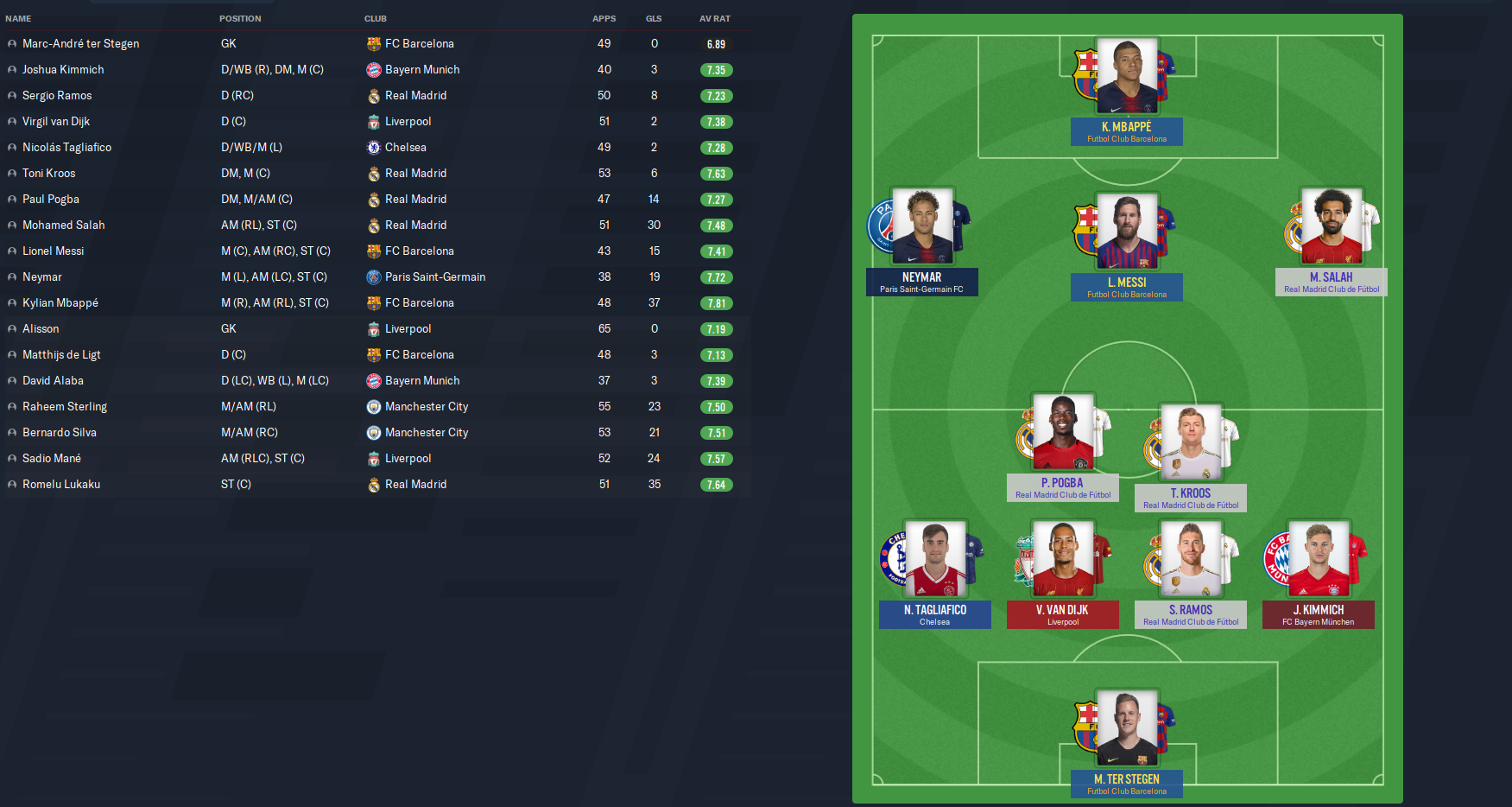 ScottT - Expecting it to be slightly more difficult than last year, but whatever happens It's going to be one hell of an atmosphere!