Eoin97
2 years
When there is Mbappé, there is goals! What a year he has had, a Ballon Dor at 23 is something very special! Loving seeing Big Rom in 2nd place

ML Scouter
2 years
ScottT, Justice and Eoin97 - None of the top 3 won the CL, though they are all league winners. Immense goal scoring from all 3 but this seasons title prospects had to count for something.
Login to Quote


3/1
The month started with a comfortable win at home vs Levante to set the team up for the Supercopa matches in Saudi Arabia.

4/1
A return for Grimaldo who was a standout performer for Benfica since arriving. Now at the age of 26 he is entering his peak years as a footballer and hopefully they will be at the Catalan side. 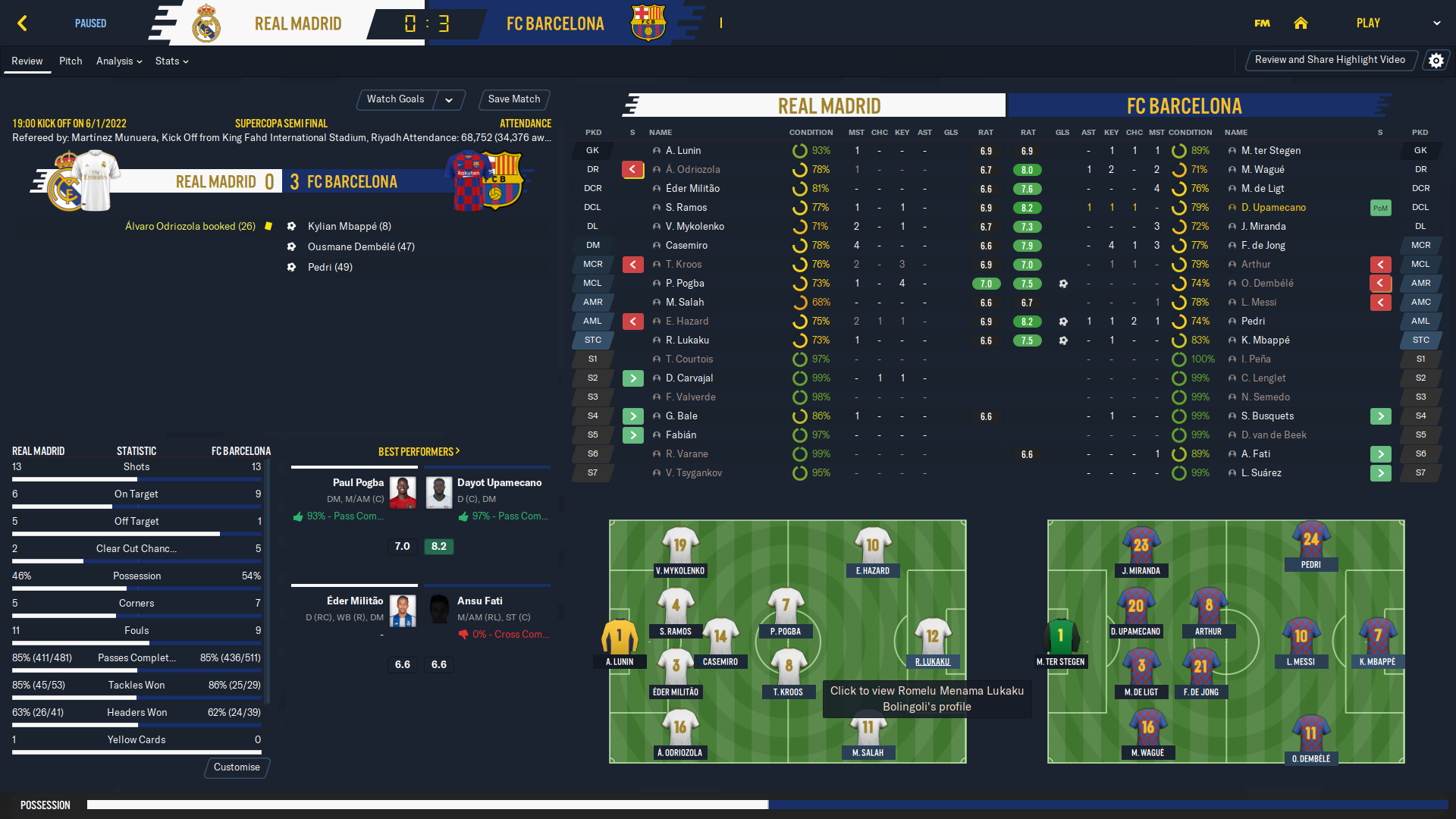 Finally, a big performance for Barcelona against their bogey side. Sending them into the final against Sevilla in a few days. 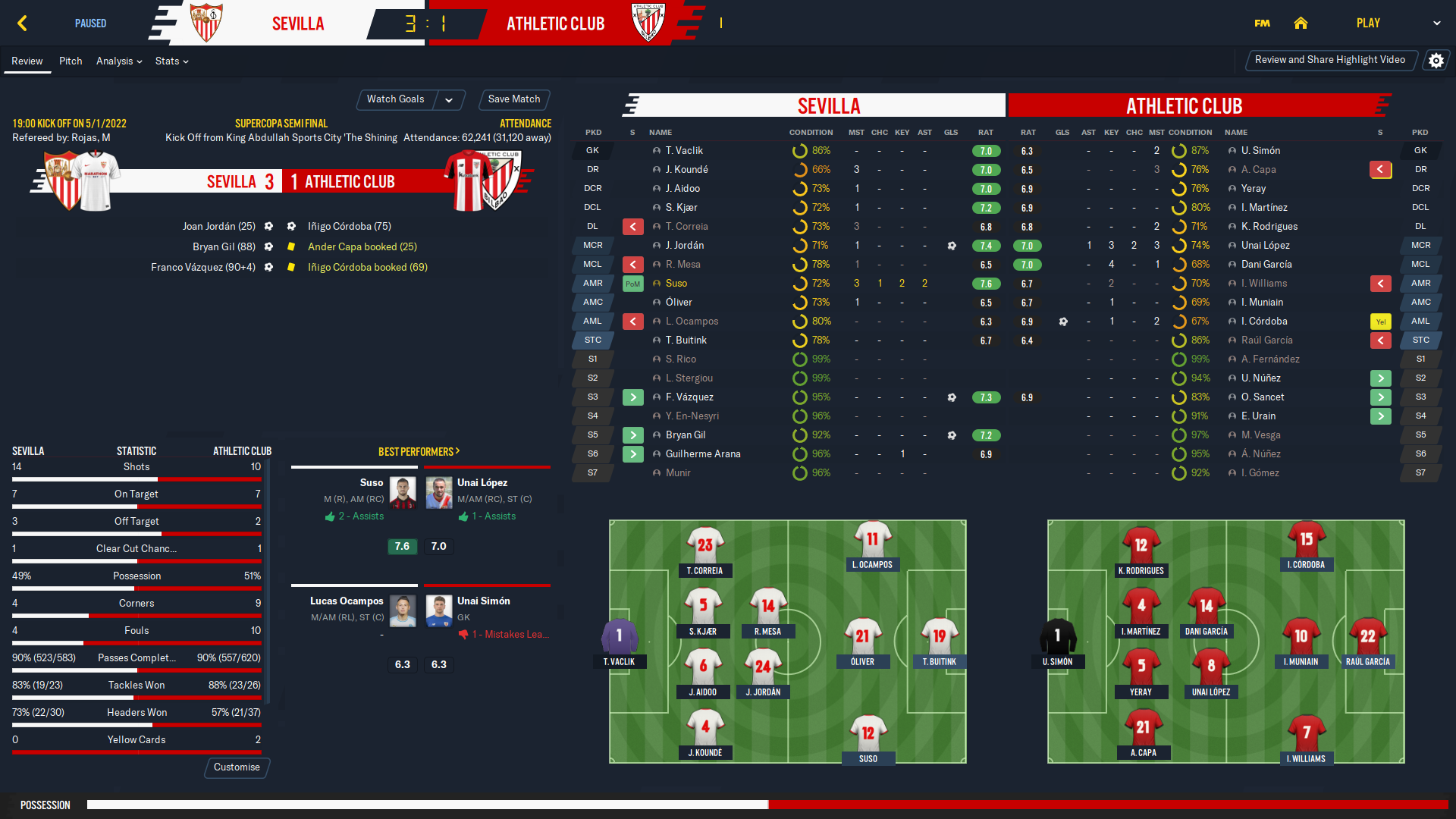 8/1
Some exciting news for many fans as Ousmane Dembélé extends his contract! He has been subject of many transfer rumours ever since joining but a new deal is deserved for this standout season and it will be exciting to watch his development. 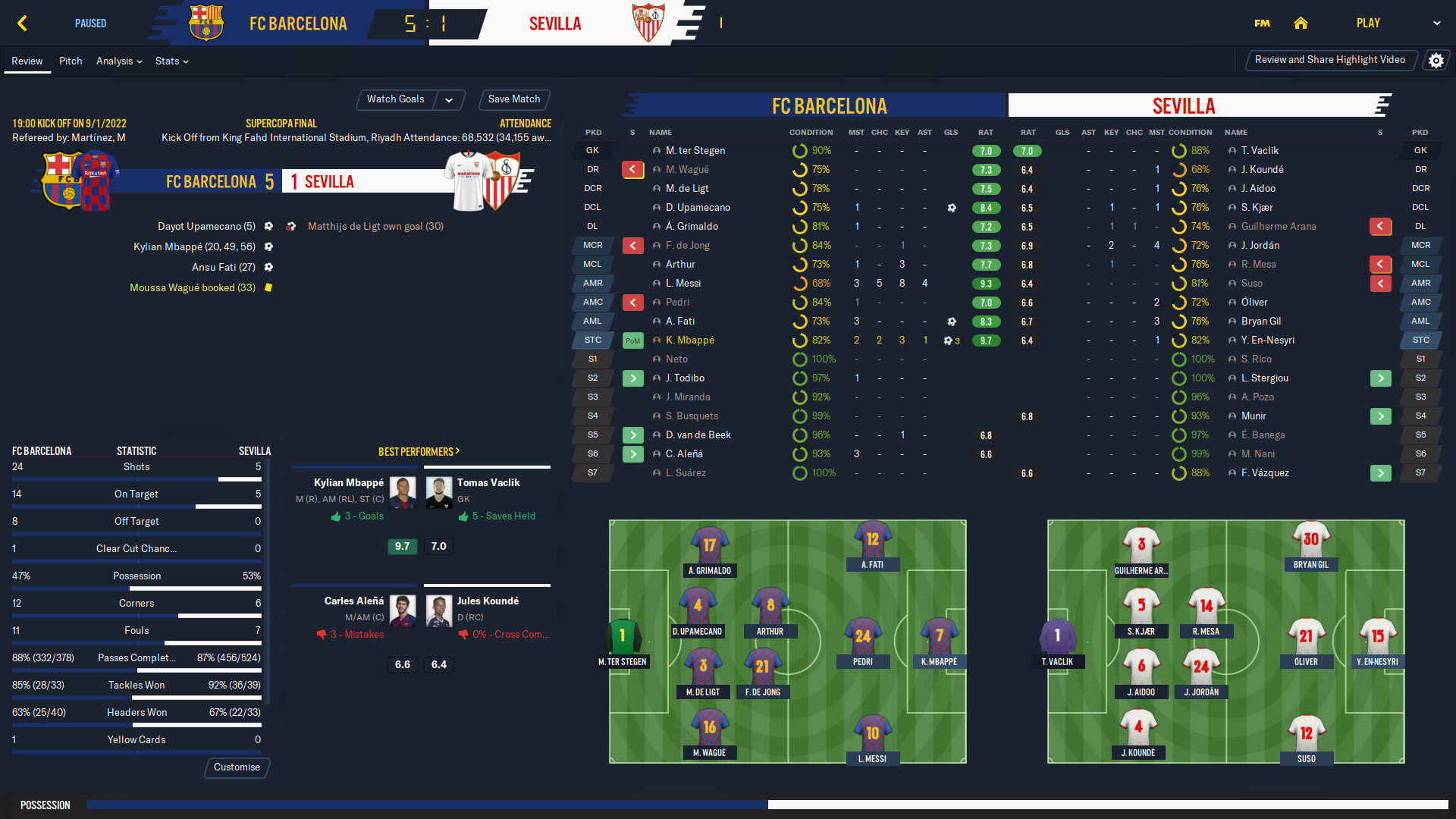 It’s a demolition job in the Final against closest challengers for the league title. Barcelona cruise to lifting the Supercopa 8-1 over the two games, increasing the worlds notice of a potential treble!

13/1
Rotation paid off in a 4-1 win against Eibar, with 4 different goalscorers and important match sharpness for the upcoming CDR fixture.

16/1
MD 21 Saw Barcelona beat Sevilla for the 3rd time this season and 2nd in a week putting the gap between themselves and Real Madrid to 9 points with the Clásico coming up. 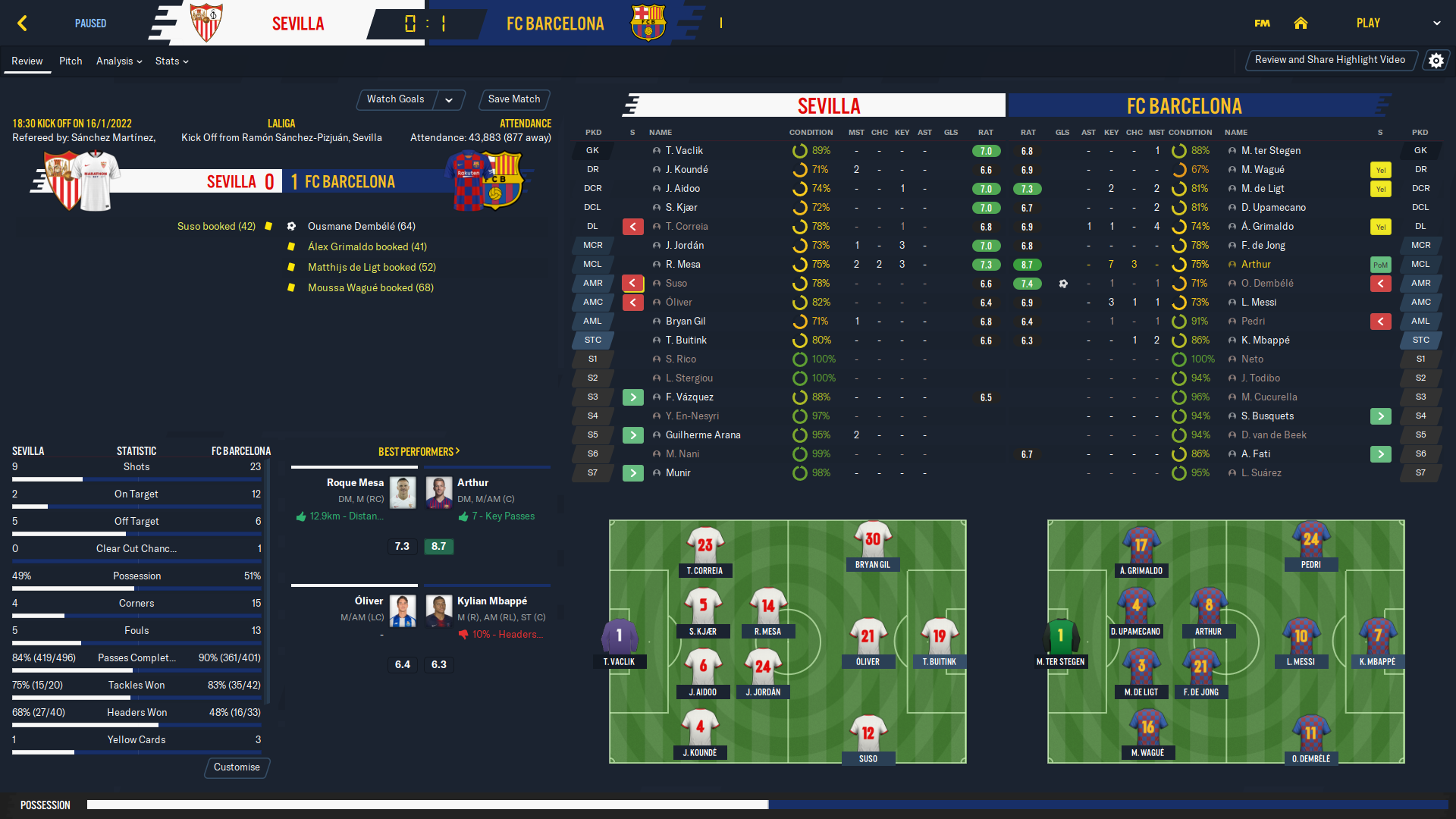 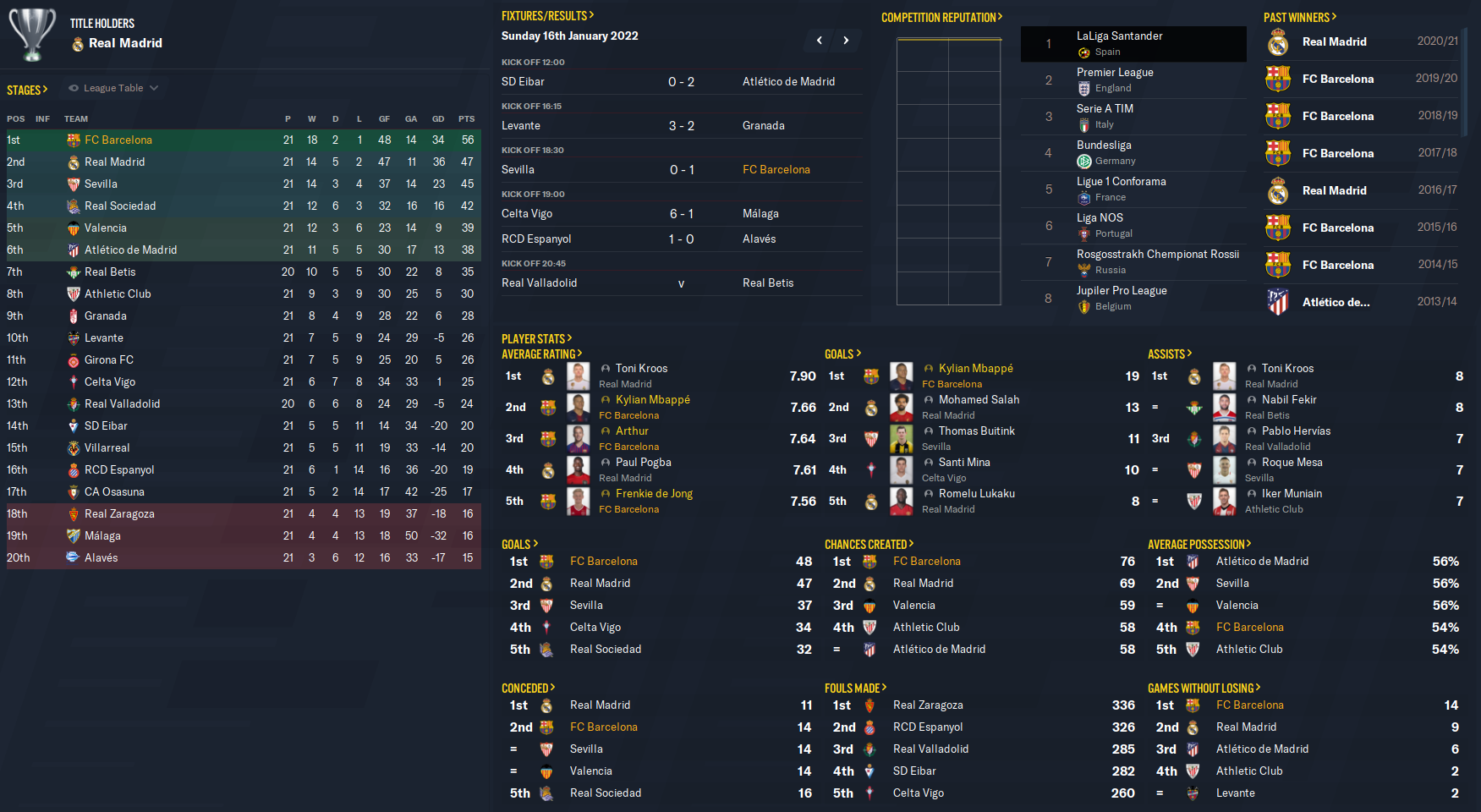 19/1
Numancia A
A comfortable 2-0 victory in the 3rd round with Fati scoring along with a first goal for Barcelona B star Jaume Jardí. It continues the trend of Fornas giving inform players from the B team a chance at showing what they can do, bringing the Barcelona of old back to the fans.

22/1
The 150th EL Clásico is Barcelona’s chance of taking what would likely be an unassailable 12 point lead at the top of La Liga. 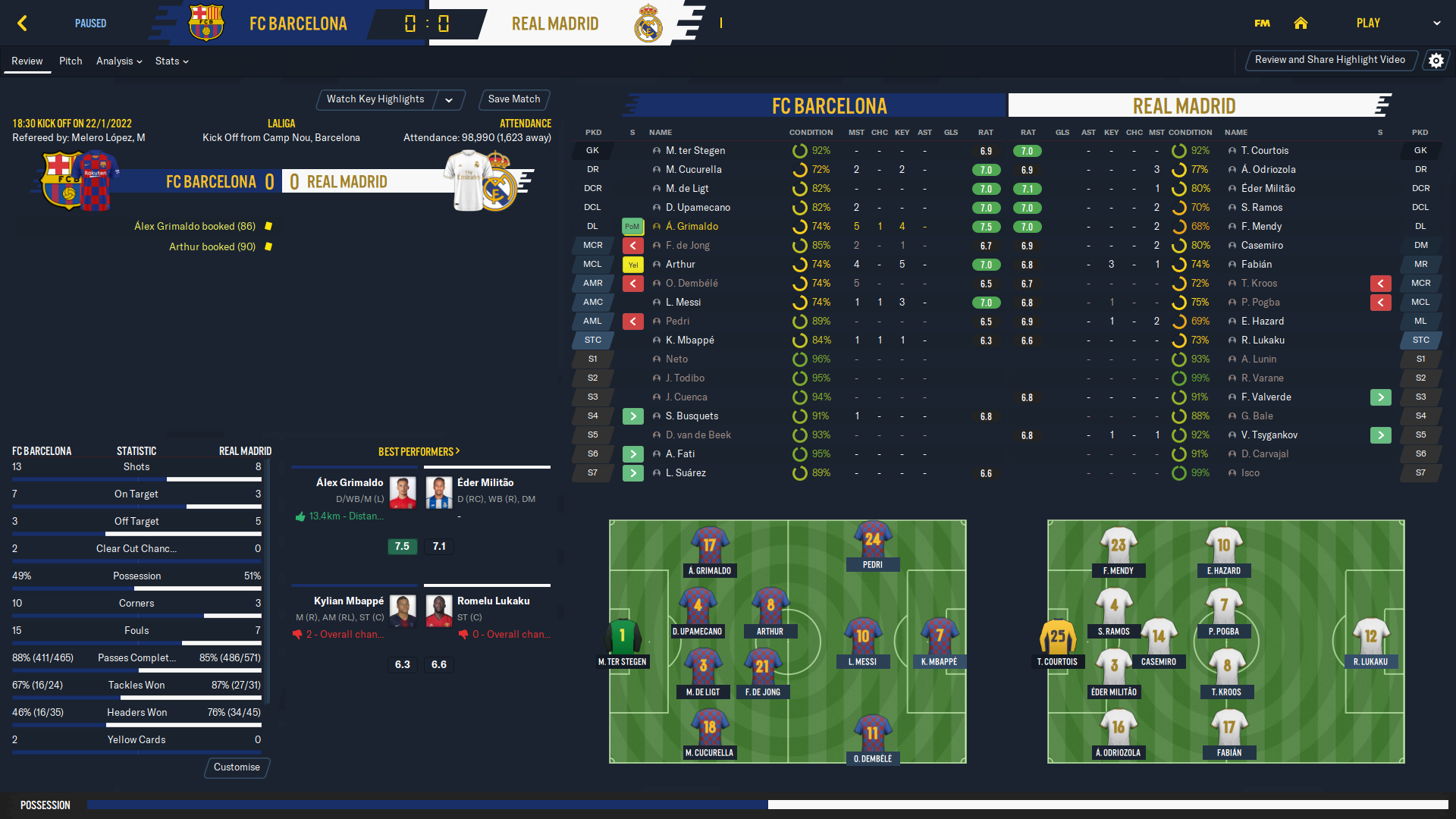 It’s a good result for Barcelona because the keep their advantage. Madrid needed the win more than anything, but they didn’t get many opportunities throughout the 90 and their grasp on the title looks like it’s slipping away. 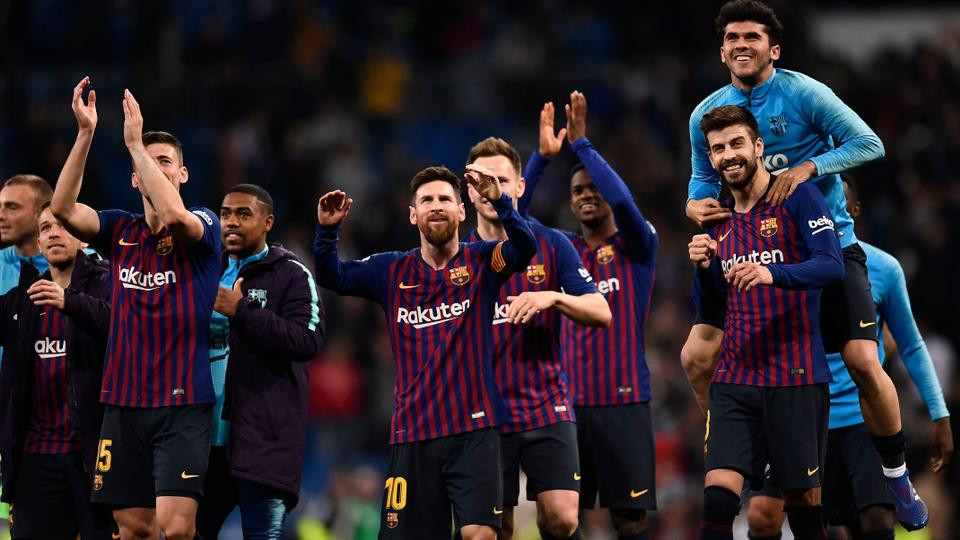 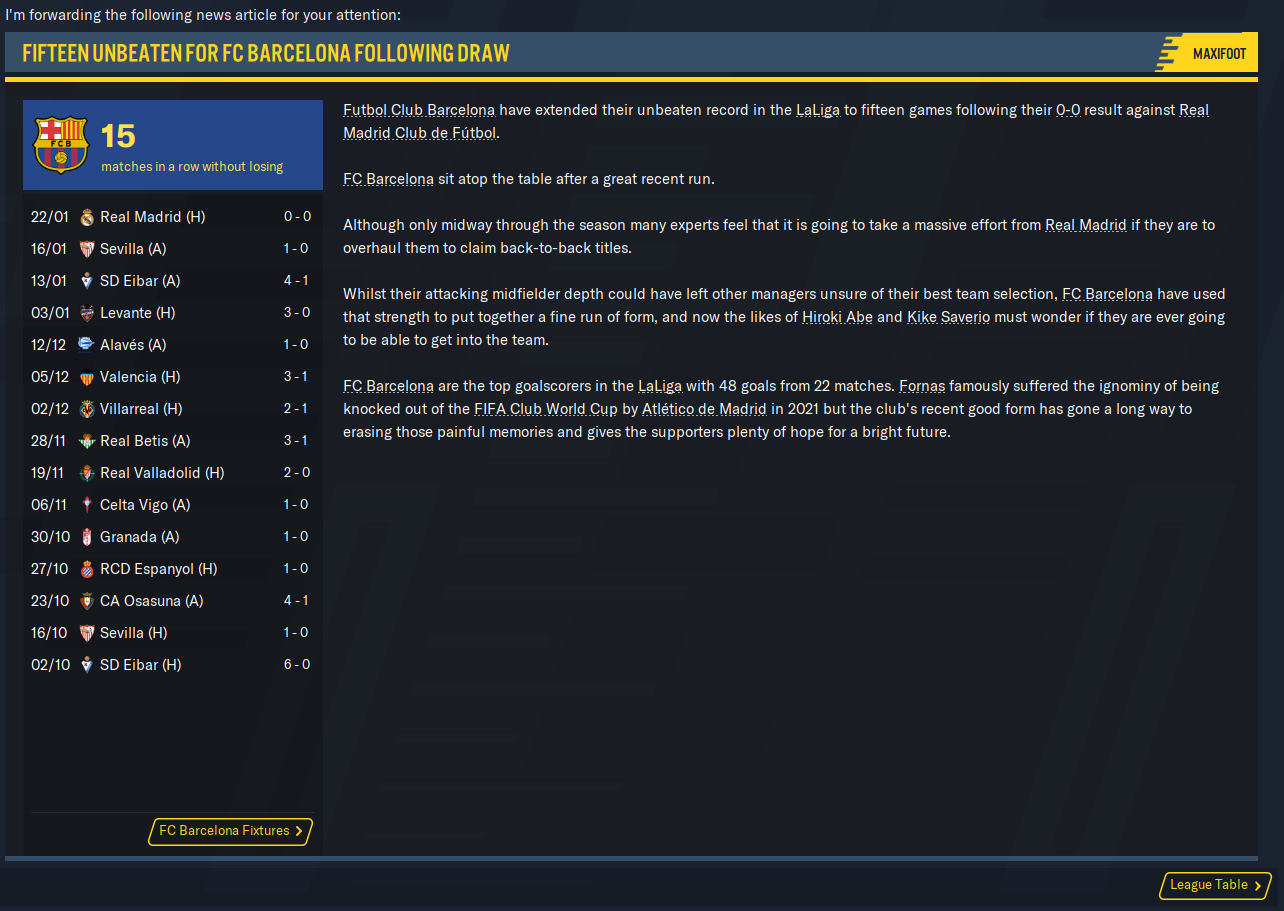 It goes from bad to worse for Real Madrid as they are knocked out of the CDR Last 16 vs Vallecano, whilst Barcelona and Atlético make it through comfortably despite the tight scorelines.

30/1
The 9th and final game of January ends with another win against lowly Osasuna.

The final incoming is central defender Pau Torres from Villarreal who will spend the rest of the season back there on loan.
There has been 6 first team departures, with Lenglet and Semedo heading to the Premier League. Griezmann joins Juventus with an option to buy and Camavinga, Alena and Miranda all heading out on loans until the end of the season.

Borja Fornas – It has been a busy month and one that has required us to use the whole squad and it has worked. I have to give credit to those who have come in to the team and made a difference for us, it’s nice to be able to really on all my players to add quality in these games.
Login to Quote

Griffo
2 years
Just threw a few coins at PSG for Mbappe and he came across... not bad..
Login to Quote

ScottT
2 years
Usually there would be plenty of focus on Griezmann departing but so much now given the number of superstars at the club!
Login to Quote 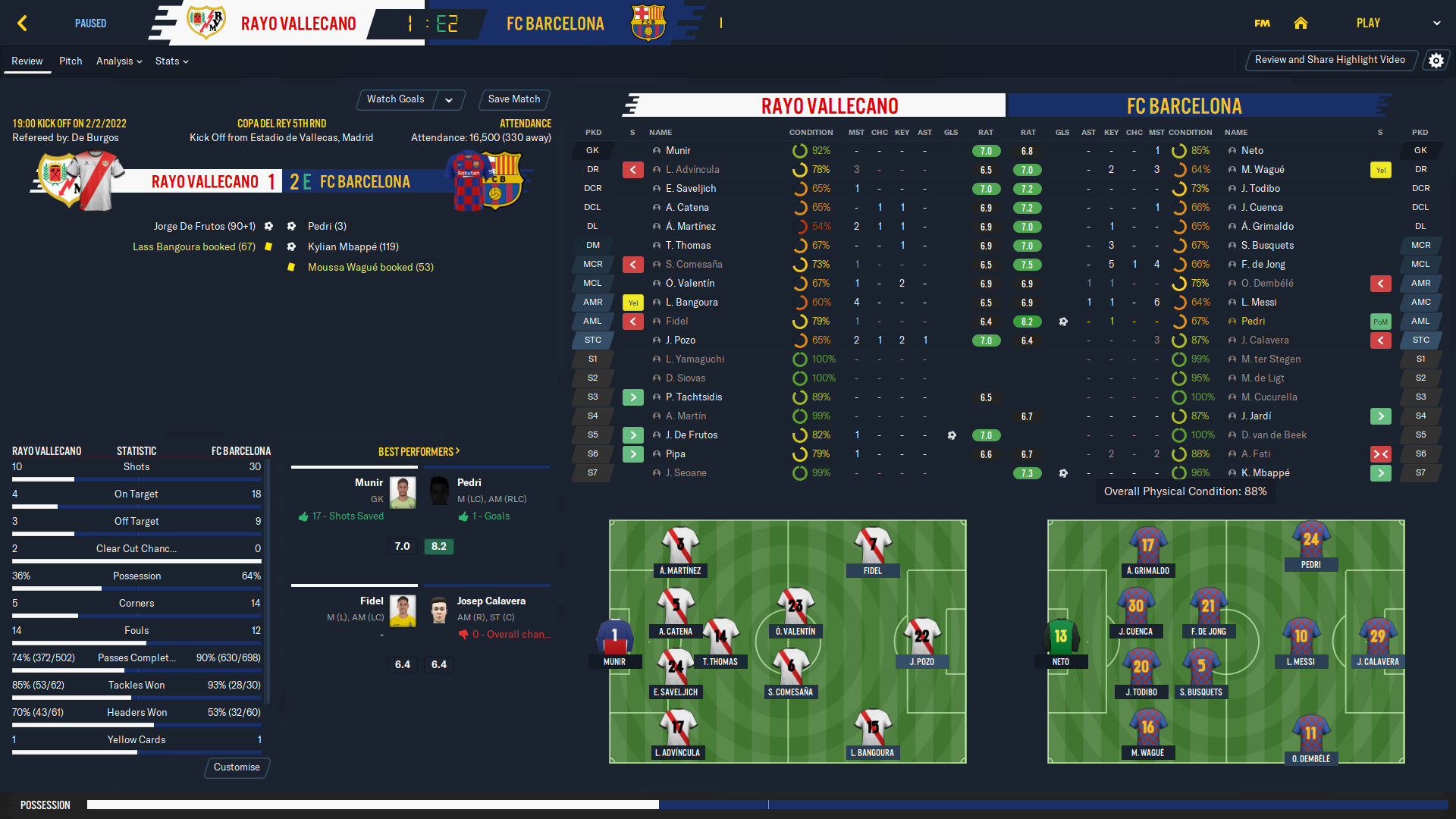 Despite us making it through to the SF it isn't the start we hoped for in another important month that sees us start off our CL knockout adventure.
The late goal stung us for the majority of extra time but the Frenchman did it again for us late on, and caused heartbreak for the home side!
SF Draw

The team everyone wanted to face over 2 legs and we should have no problems reaching the final.

The extra time didn't stop us in our La Liga run, with another comfortable win. 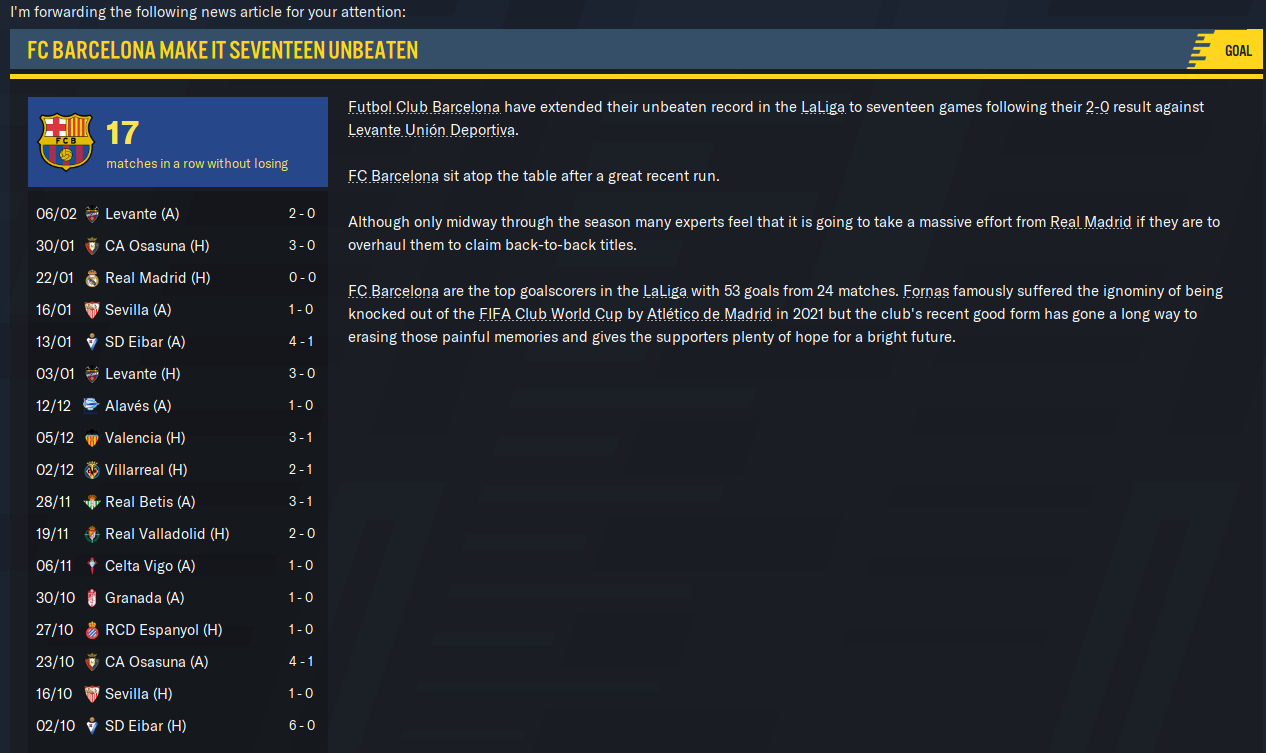 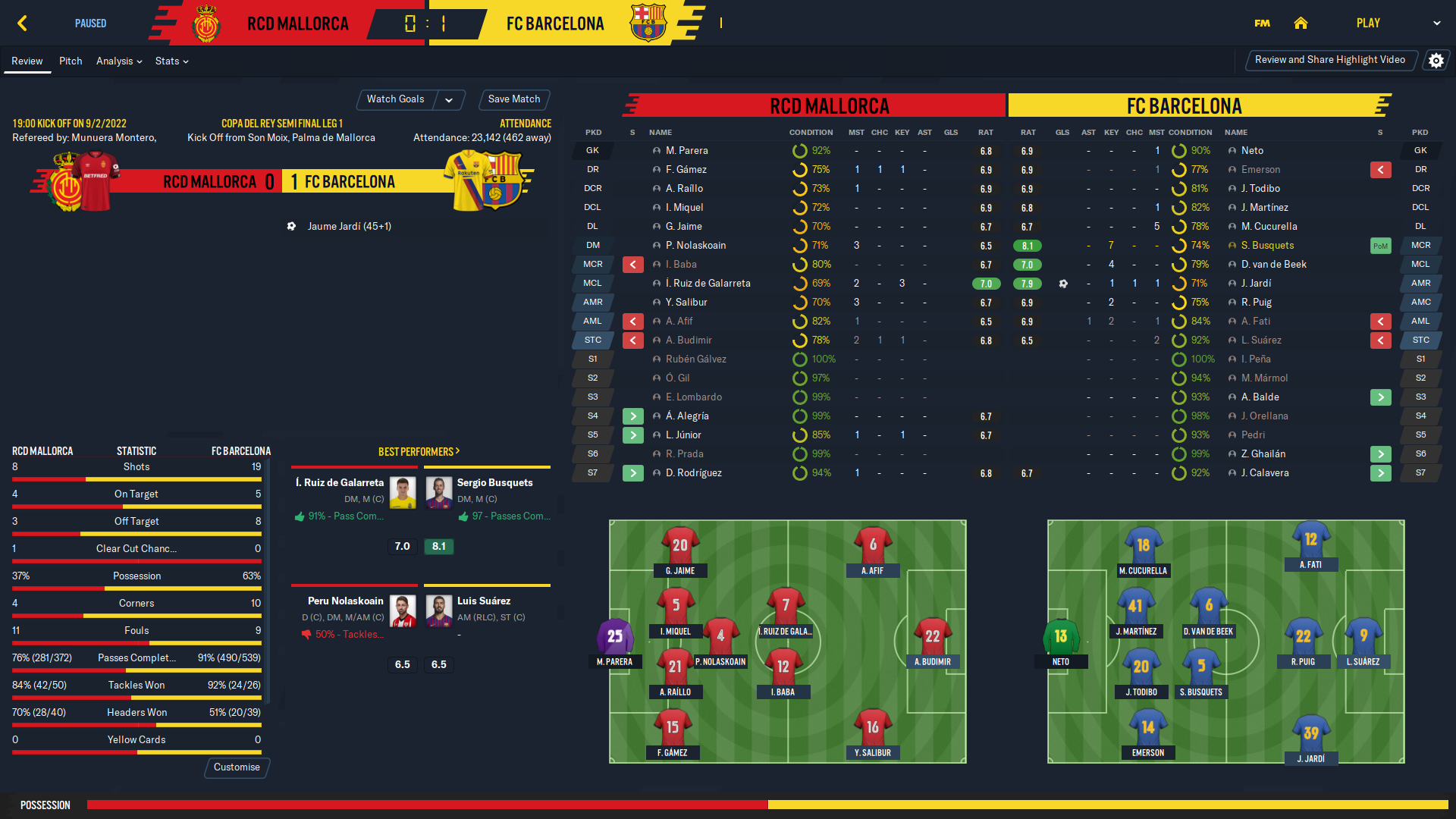 Although it is the semi's it proved to be the right decision to rotate the side again. 1 away goal should be enough against Mallorca barring a sensational comeback.

12/2
Real Sociedad was the final game before the CL returns and Mbappe and Messi wrapped up the game within 20 minutes, allowing early substitutions and a good warm up to the big one. 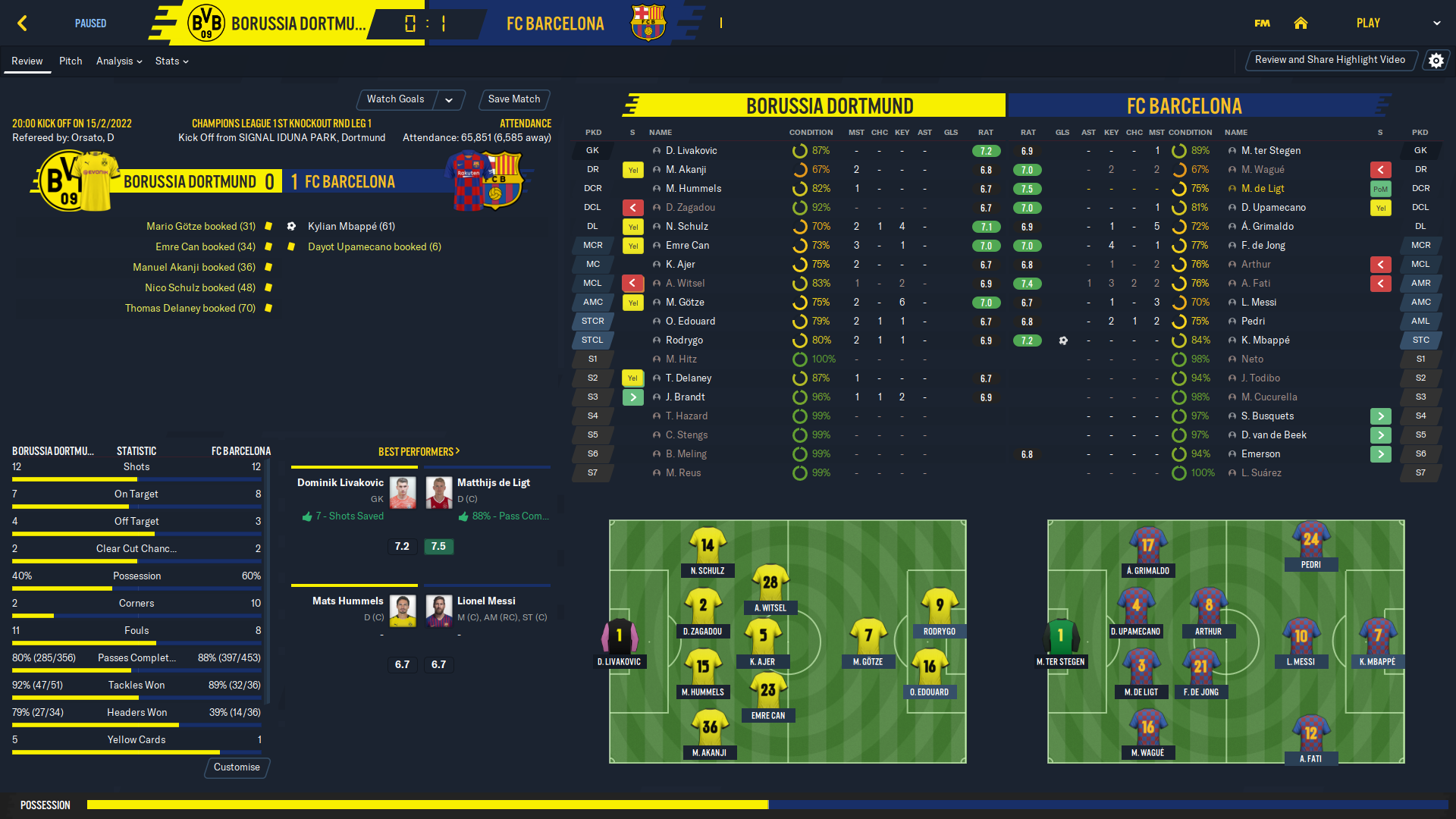 Dortmund are a good side and they proved they have the ability to compete at the highest level. A tight game such as this can be decided by a moment of brilliance and Mbappe once again proves that he is currently the best player in the world!
Any team going to the Camp Nou with a deficit is going to have limited chances to get it right. Another QF appearance looks likely. 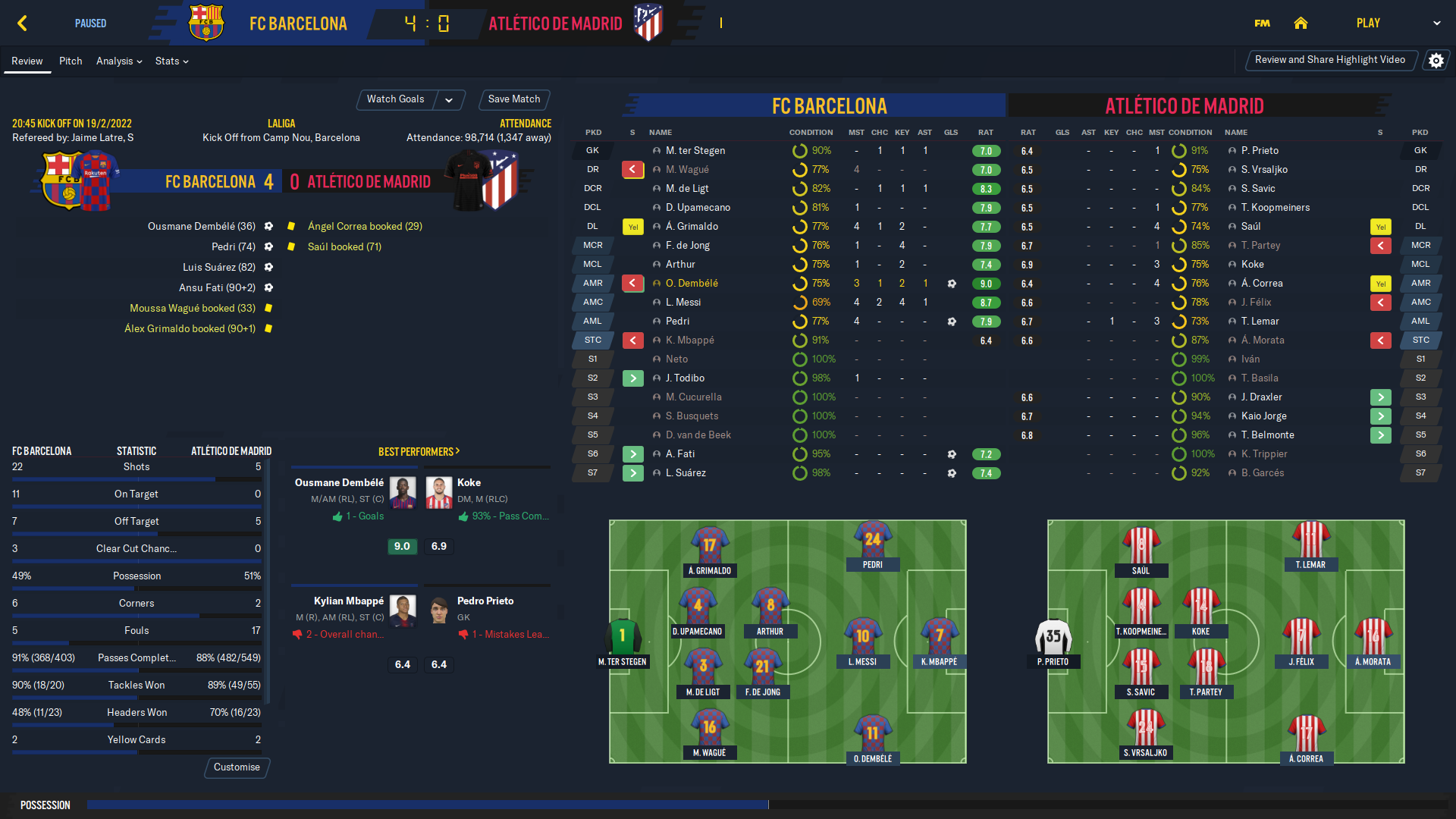 Humbling Atletico just days after the big CL game put pressure on Madrid to get a result and stay within sight of Barcelona... 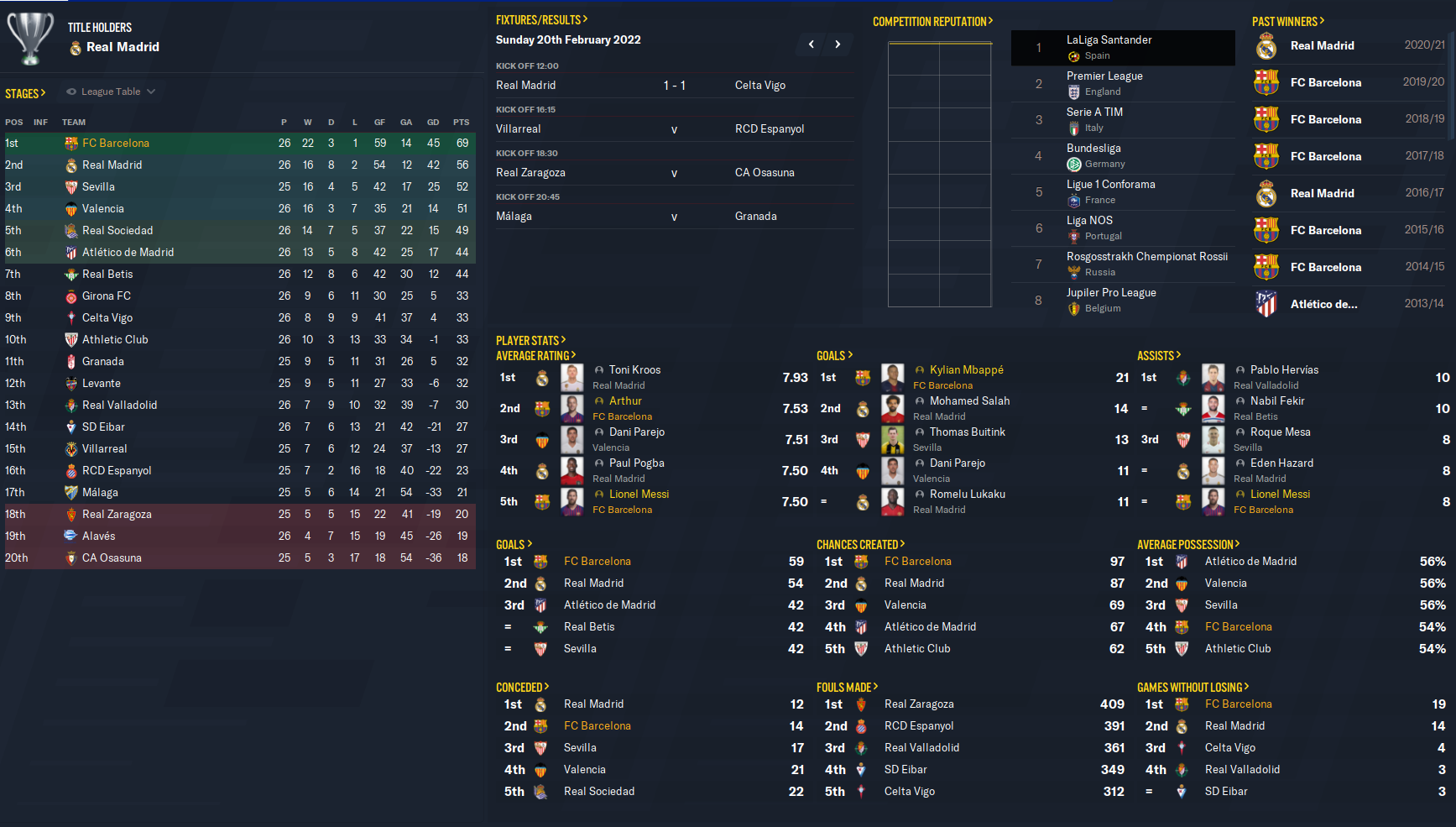 With 12 games remaining Barcelona go 13 points clear and have the title within touching distance!

The 3-0 lead came at the hour mark before a late comeback from Valencia which just wasn't enough!

Fornas leads the previous 3 managers with the least goals against. Despite the 6 titles won by Guardiola in his first 100 games he lost 1 more than the other 3.

Luis Enrique comes out on top for wins, draws, GF and GD.
Login to Quote

ScottT
2 years
Fornas could very easily add to his collection with more than just a league title.
Login to Quote

Zed
2 years
Very good month in terms of results, especially that away win against Dortmund is impressive! Love the fact that you've managed to bring down the average age of the starting eleven so much without sacrificing on-pitch results.
Login to Quote

Justice
2 years
In esteemed company with that record. While the Barcelona job has some of the world's best resources in football, it also has some of the highest expectations. You've done well so far, now it is time to make another great century of games count!
Login to Quote

Griffo
2 years
Really interesting comparison to previous managers, I love little things like that in stories
Login to Quote 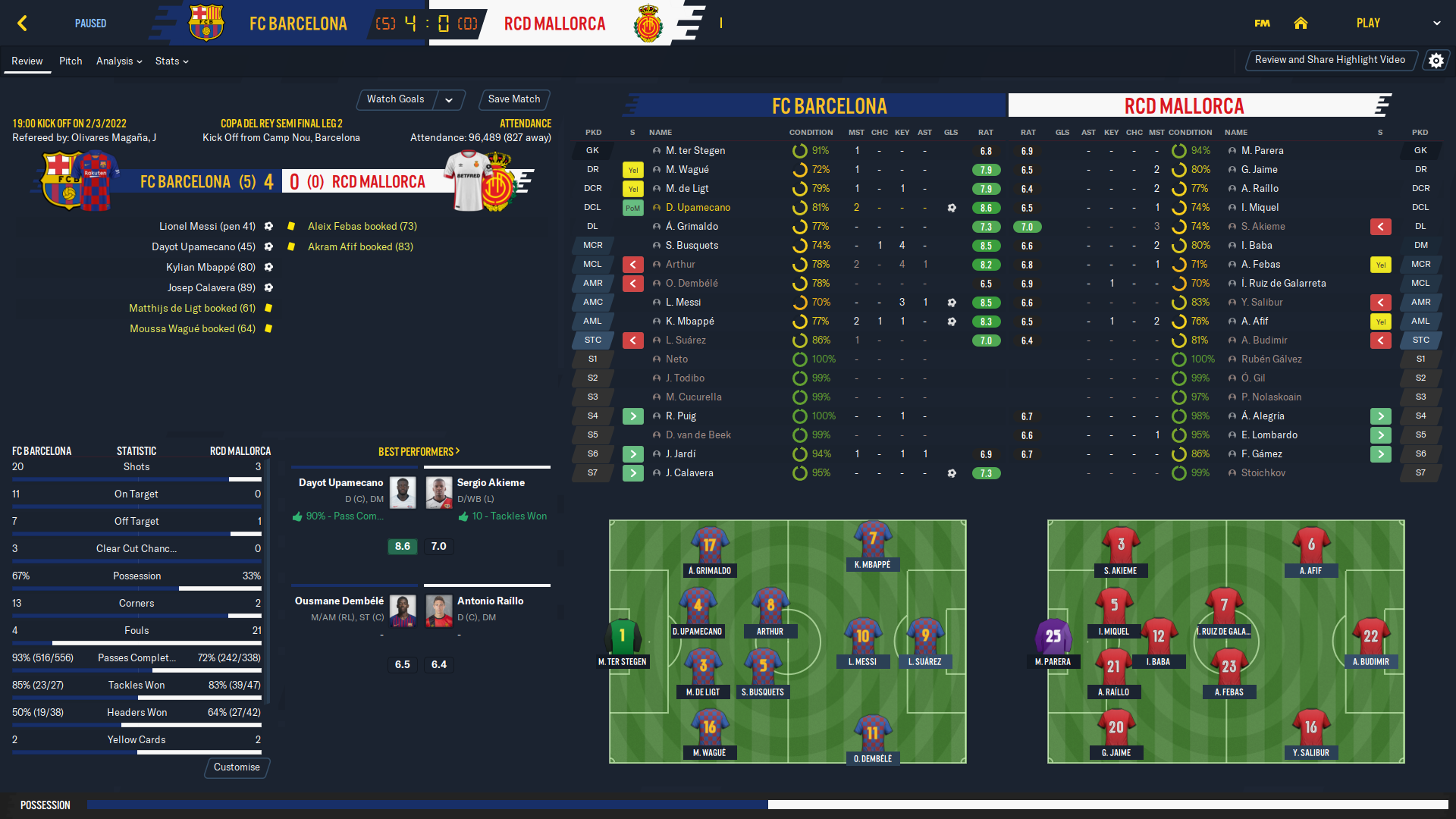 An outstanding display in the semis, along with a goal for our new wonderkid striker!

A 0-0 was enough to see Barcelona through to the QF's. A relatively comfortable game, but as they progress in the competition they will not be able to rely on scoring just 1 goal. 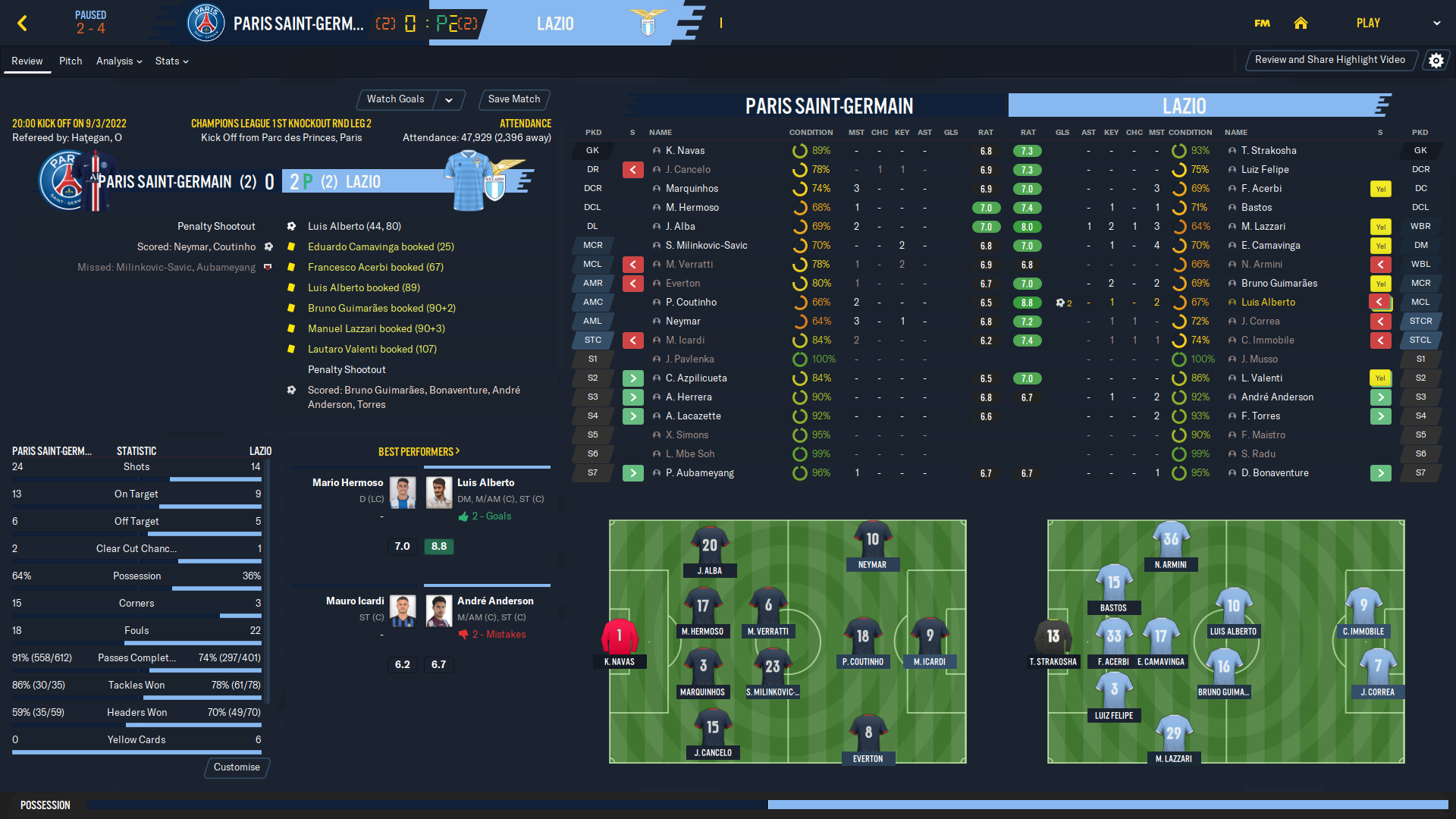 Some really big ties in the L16 ended CL campaigns earlier than expected for Bayern and Atleti, though sending through 2 contenders for the competition!

Villarreal proved to be an easy game again for Barcelona despite coming from a big midweek fixture. 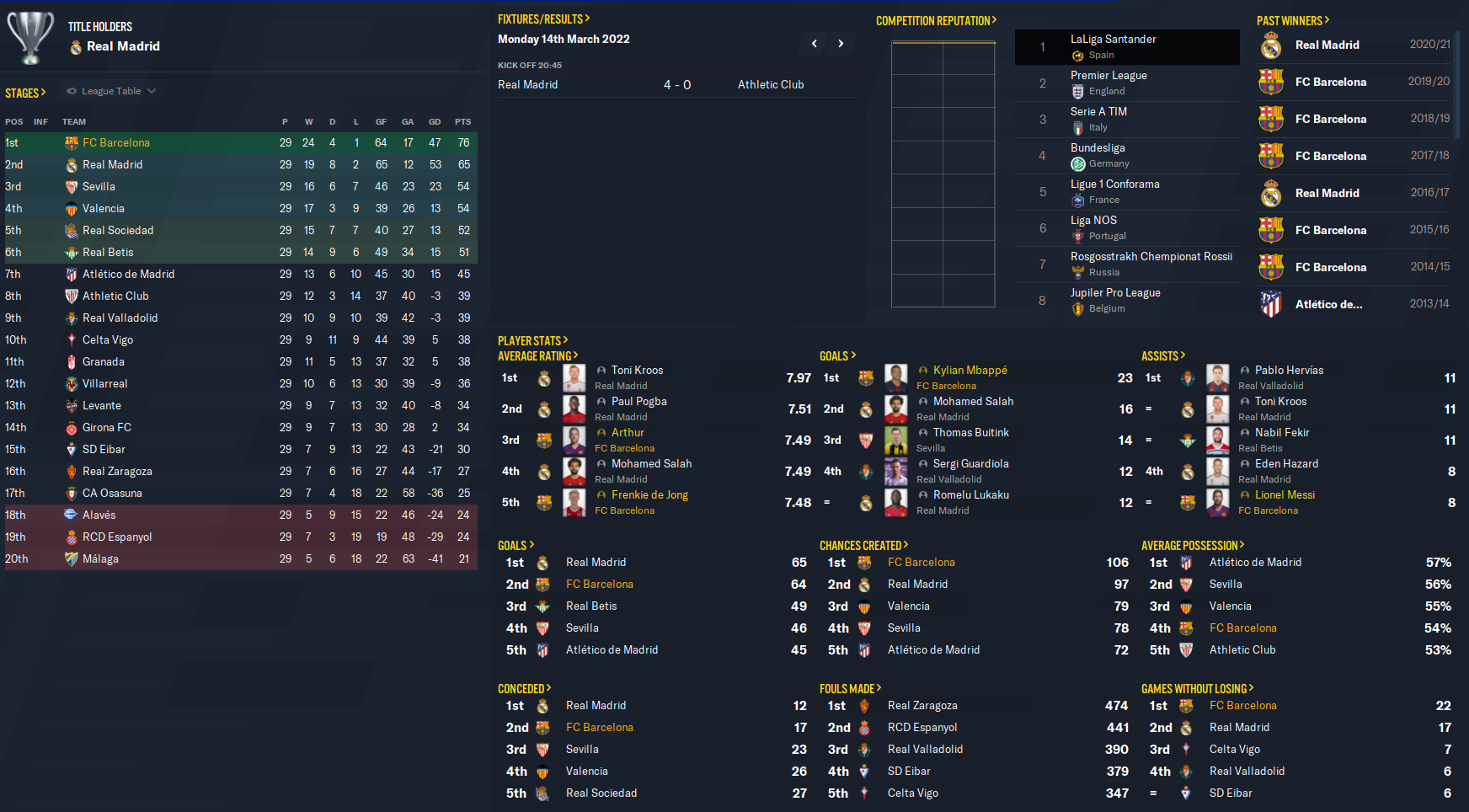 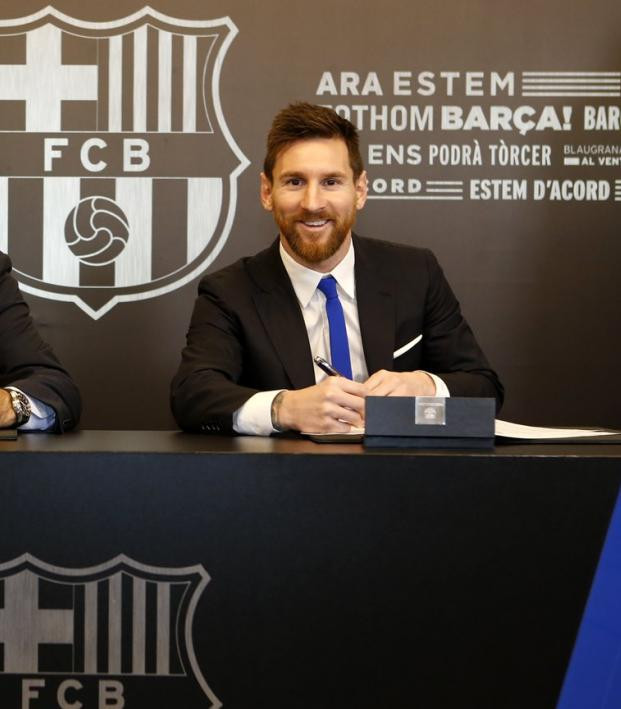 Iván Álvarez – We are delighted to announce Lionel Messi has signed a contract extension until 2023 with an option of a further year. Messi decided to make the decision now, we left the door open for him to open talks whenever he felt the time was right. We sincerely hope this won’t be the last we sign.

Messi - I have said many times as long as the club and the fans want me to stay, I am happy to do so. They have shown me the desire to win the biggest titles and that will always be my goal.

It is a significant wage reduction for the Barcelona legend to a minimum of €31.2m annually, down from €62.4m.

A huge tie in the QF for Barcelona. Thye face off against Ronaldo and co for a place in the SF...

Both teams will be happy with the side of the draw they are on, missing out Liverpool, Man C, Man U or Inter! 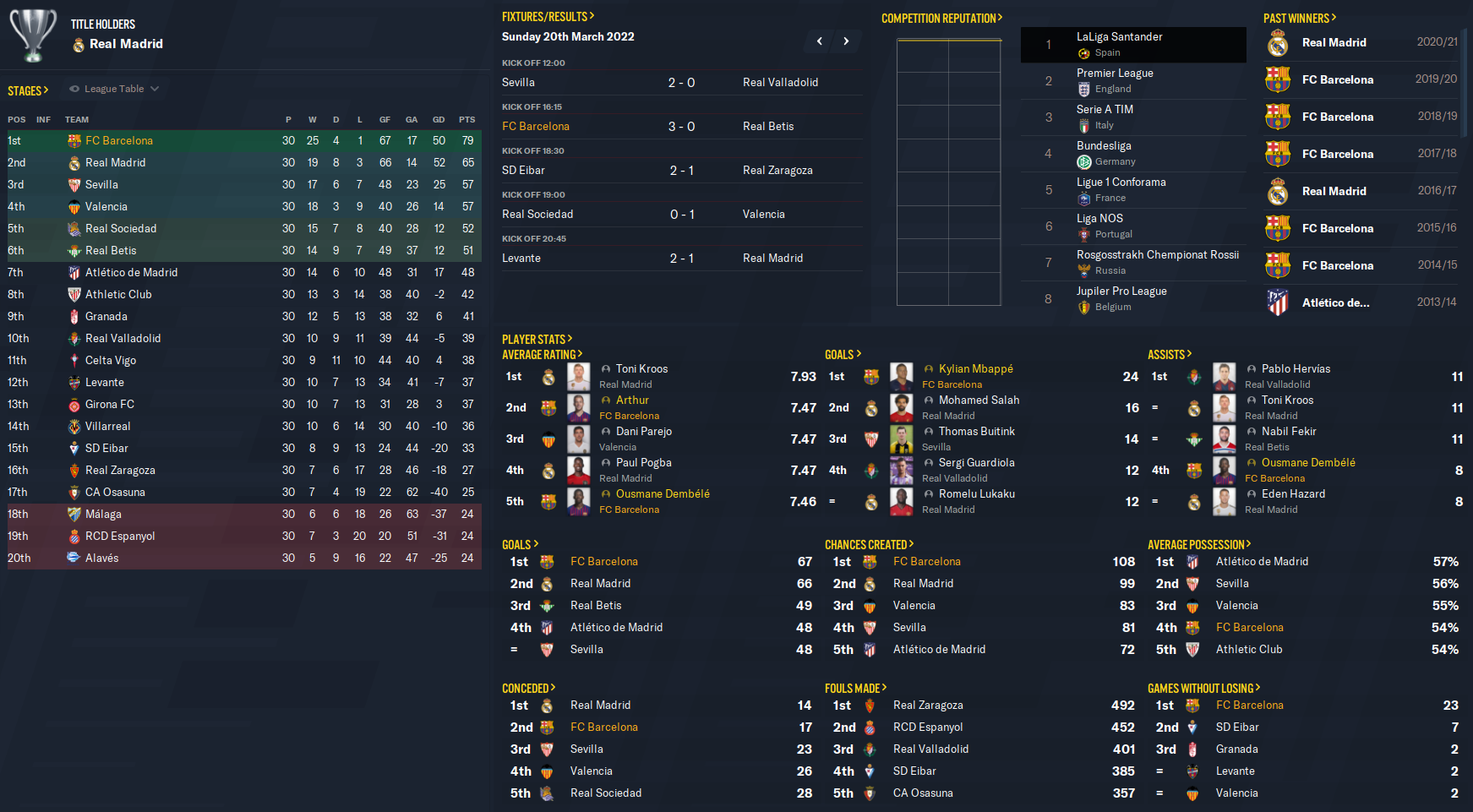 The final game of the month MD30 saw Barcelona move 14 points clear with just 8 games remaining!
This season the Catalan side are breezing through their opposition with a hunger to win win win

ScottT
2 years
A much easier semi-final opponent than quarter-final I would argue! Glad to see Messi has committed his future - no surprises there though!
Login to Quote

Griffo
2 years
Messi still proving he can't do it a cold rainy night in Stoke..
Login to Quote