Coutinho – Bayern offered £80m to keep him but that was well below asking price.

Cucurella - Getafe had the option to buy him for £5m, but they didn’t do it. Thank you FM!

Todibo – Option to buy of £21m, thanks Schalke, thanks FM

Wague - £13m option to buy and once again they don’t take it.

As is evident from the options to buy for these players, this Barcelona board is incompetent. They buy players to loan out and sell. The FM gods saved us here!
Login to Quote 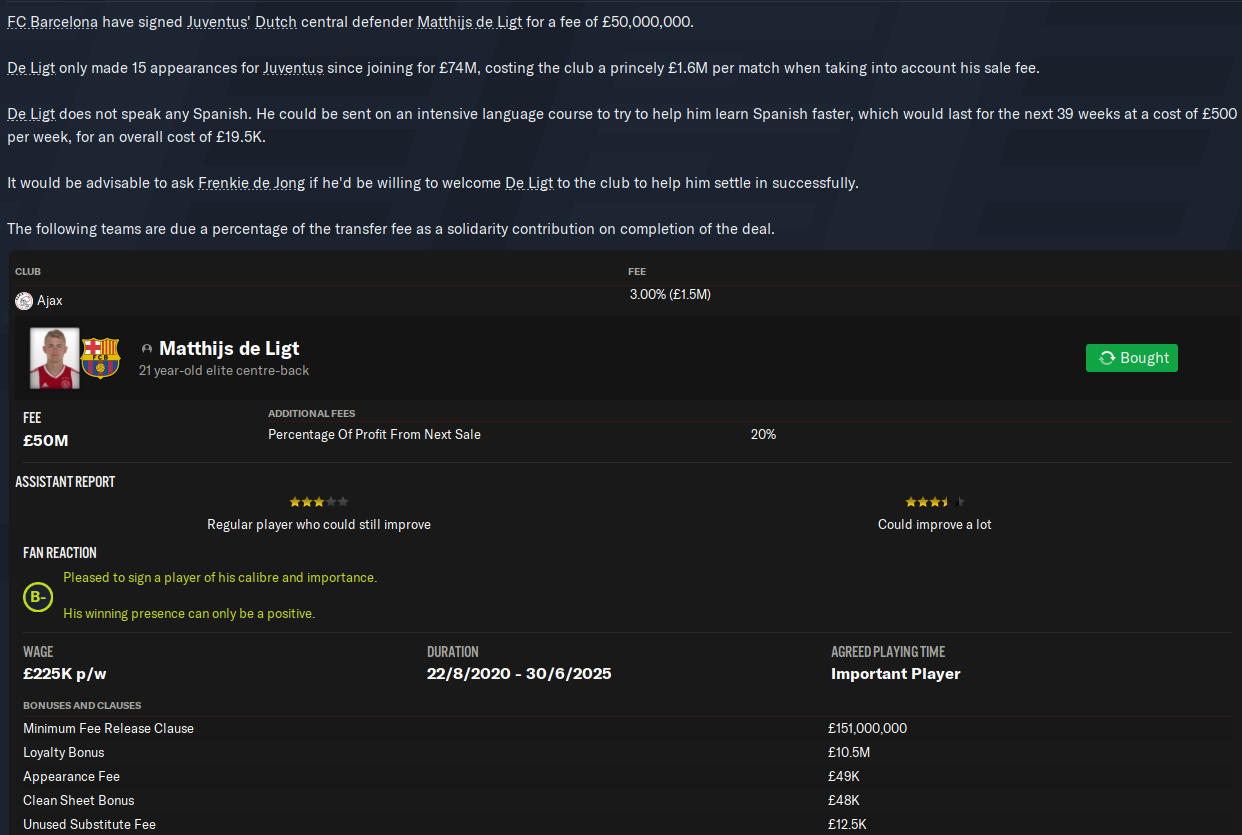 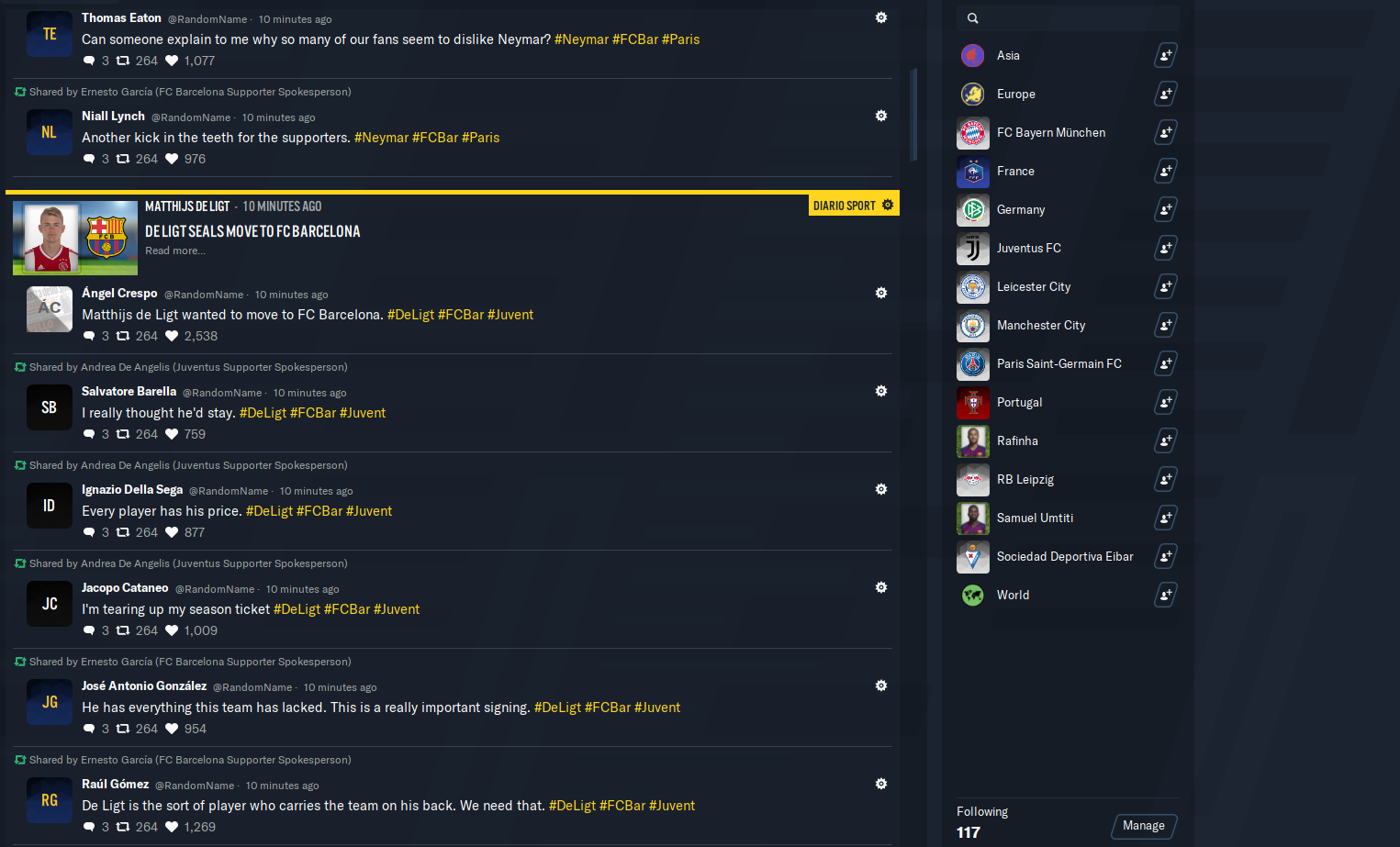 The 21 year-old Dutch centre back that many label as the best young defender in the world makes the move to Barcelona just a year after signing for Juventus. Many are aware of his already extraordinary career, being named captain of Ajax in 2017 at just 17 becoming youngest in their history! Also youngest in CL KO at 19 years!

Juventus paid over £65 million plus £9m in add-ons for his services, despite interest from every other super club including FCB, he said. “I knew the style here would make me a more complete player.”
No trophies for Juventus in 2019/20, included a SF exit in the CL and finally surrendering their 8 year dominance of Serie A. This paved the way for de Ligt to get the move many thought would happen last year around. 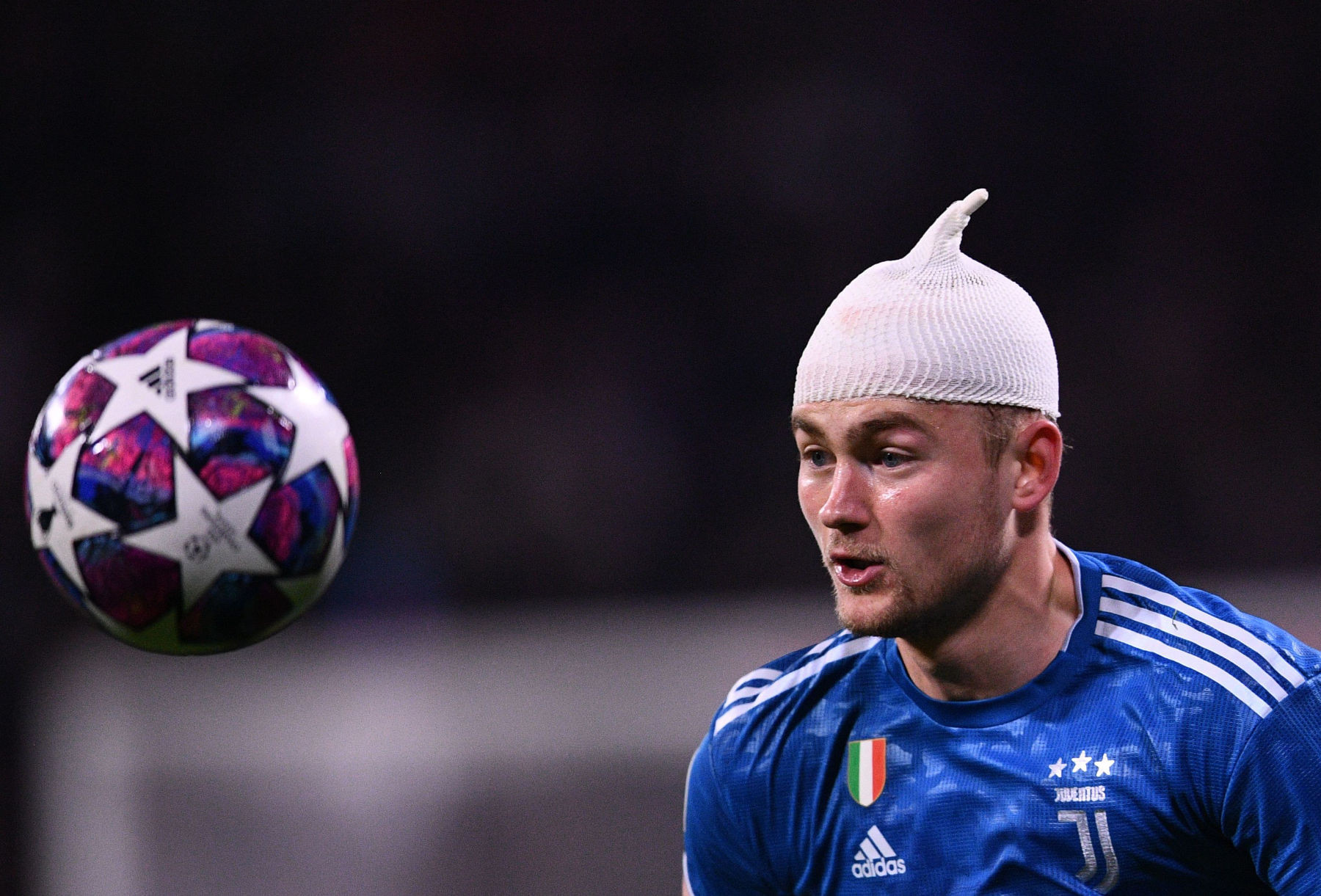 Matthijs de Ligt – It’s a dream to be a Barcelona player! I’m not going to say last year was a failure because learnt a lot and I’m proud to have worn the Juventus colours, but Barca showed their desire to have me and so I spoke to my agent about the possibilities and I have to thank him.

I haven’t seen Frenkie (de jong) yet but we continued to speak all last season, it’s so nice to have a close friend here so I can settle quickly.
I’m 21 and I have play with Ronaldo and now have the chance to play with Lionel Messi, I am lost for words!

Borja Fornas -
I’m delighted. I think it’s clear to everyone we wanted to refresh the squad with a young talent player and that’s what we have here. Of course we would have like the deal to happen earlier so he could be part of pre-season, but it doesn’t always work like that and I’m sure he’ll be fine.

Rakitic – 6 seasons he spent here and was a very important player under Valverde, but 32 now and it’s the right time to move on.

Vidal – Joined in 2018, not quite got the Barca DNA but a workhorse and gave his all for the cause. Plus a profit made on the Chilean.

Alba – Part of the youth setup before moving to Valencia in 2007 where he improved every year and returned to Barca in 2012 for £12m. The move paid off with 6 league titles, 4 Copa del Rey’s, 3 Supercopa’s, Club World cup and the Champions League. One of the hardest sales to finalise but the decline is clear, and the squad needs a shake to push the club back to the top. A good deal all round.

Roberto – For £62m he joins the club that he scored ‘that goal’ against back in 2017! The La Masia product made his way into the Barca line-up in 201, but it wasn’t until 15/16 under Luis Enrique where he found his place. After the departure of Dani Alves Roberto was deemed suitable to take that position, does a lot of running and that 95th minute goal vs PSG will never be forgotten!

Umtiti – An integral part of the Barcelona defence for the first 2 seasons of his career. 2016/17 and 2017/18 he played 25 league games; this was cut to 14 in 2018/19 due to several major injuries to his left knee. He has never quite been the same since then, but at 26 the French World Cup winner still has chance to live up to his huge potential, but he will be doing that in Manchester.

Rafinha – Spent the last couple of years on loan after a torn cruciate ligament in his right knee vs Roma in 2015 left him out for the season. After a successful loan at Inter 17/18 he looked to break back into the packed Barca midfield but in November 2018, he broke his left cruciate ligament, which signalled the end of his Barca career.
Login to Quote

There needed to be something different in the squad, a fresh hunger. Especially after the humiliations in the CL over the past 3 years, something has to change!
Login to Quote

It's a nice start for the new Barcelona manager facing a promoted club who spent just £4.5m on 6 players this season. Their wage bill is £11.86m a year compared to Barca's £200m+! It takes about 2 months and a half for Messi to earn that much. 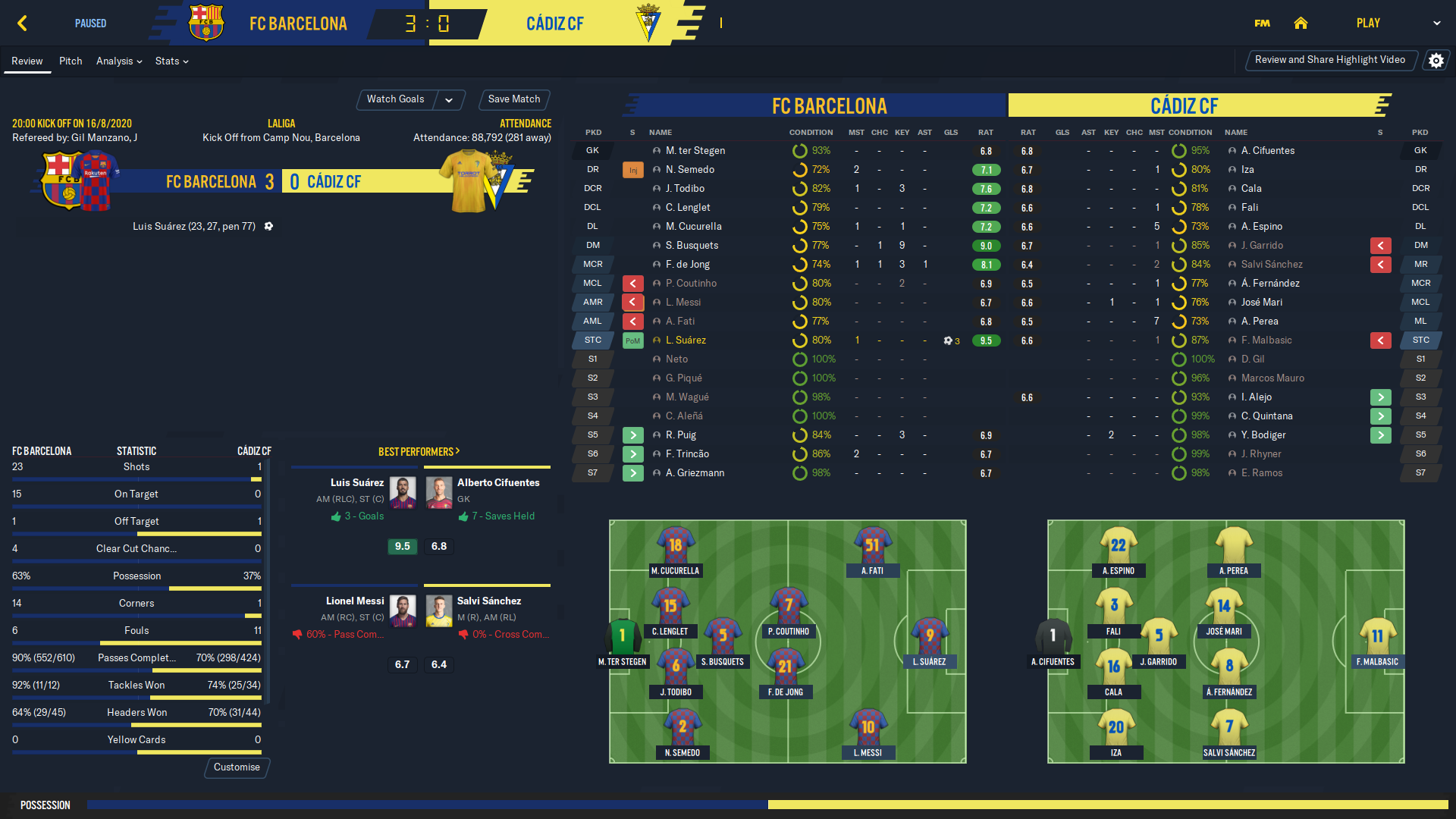 A winning start to his managerial career. Suarez stole the show, though Messi and Semedo picked up knocks. Just 1 shot on target for the away side, but the Camp Nou visit is a bonus to their season and time to move on

Borja Fornas - A brilliant atmosphere. The feeling to get to manage this club with that support is magical! I'm very happy with how it went, of course 1st game lets not read much into it but it's a good start and we move to our next game.
Login to Quote

Only three games in August. The seconds ends with a big win at the Anoeta, holders of the CDR (3-0 vs Athletic Club). They have struggled here in recent history. Messi and Semedo were absent after injuries suffered in M1, so Suarez once again stole the show! 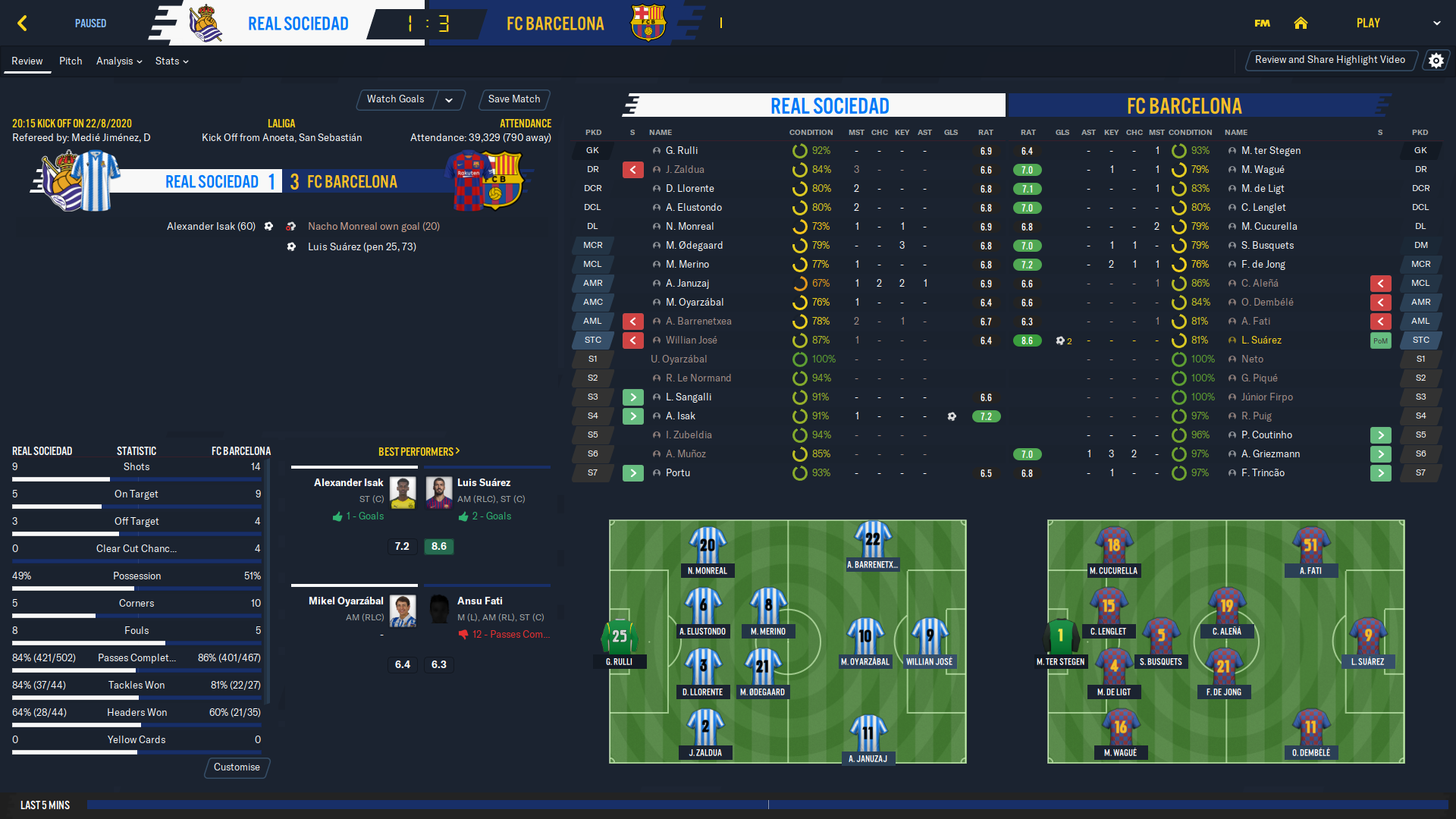 The final game of the month saw Messi return and get his first goals of the new season. Morales put Levante ahead inside 15 minutes, but Alena quickly replied 20’, followed by Messi 33’ and a second half penalty on 51’ The win moves Barca top of La Liga!

The next game will be on the 12th September, Alavés will travel to the Camp Nou.
Login to Quote

ML Scouter
1 year
The transfer window shut with just two incomings for Barcelona for a total of £77m (£50m new manager) and sales amassed £232m. NET spend = + £155m. A welcome change for the team 2nd on the list for most money spent over the past decade (£1.3 Billion!)

Here is the list of the top 10 transfers of the Summer 2020! One of the worlds most wanted young players moves back to England for a big fee but in today's market he is well worth it.
Lukaku moves after just one season at Inter!
Liverpool on there with two signings that look like very good business.

Other notable moves that don’t make this list include; Aubameyang to PSG £19(£24.5m), Hakimi to Schalke for £15.75m after a few season with Dortmund. That’s sure to go down well. Callum Wilson to Leicester for £38(£48m)! Another Ajax star Rb Mazraoui moves to Bayern for £26.5m.

Big manager movements too with Simeone leaving Atlético after 8 1/2 years, he was quickly snapped up by Bayern who of course sacked Flick after the CL Final defeat.
Frank de Boer replaced Lopetegui at Sevilla and Pellegrini returns to Spain for Athletic Club.
Peter Bosz was sacked after a 6th place finish at Leverkusen and Manuel Baum took over there.
Gian Piero Gasperini moved on to manage the national side after successful retaining 3rd place in Serie A, Didier Deschamps took the reigns after a 2nd Round exit in the Euro’s. Napoli only managed 7th place so Gattuso was moved on and Marco Giampaolo was given another go at the top of Italian football.
Robert Moreno got the sack at Monaco so Dinamo Zagreb manager Nenad Bjelica was given the chance.
Login to Quote

The transfer window has only been shut 5 minutes but Barcelona make a signing that will go through on the 4th January 2021. Eduardo Camavinga!

Interest has been high for this man for a long time with PSG and Real Madrid both looking to sign the 17 year-old but Barca got their man for just £28m.

Camavinga - I'm glad the deal has been done but I can't relax. I have to work even harder now to show the manager what I can do, so I'm not going to talk about it anymore. I'm focused on the start of the new season with Rennes.

Fornas - It's brilliant news. You can see the talent in this boy and the person he is with the comments he made when signing. We are delighted he chose us, but there's stuff to do in the meantime.
Login to Quote

ScottT
1 year
One for the future.
Login to Quote

A vey good month for Barcelona including 3 clean sheets. First CL game of the season at the impressive Stade Vélodrome wasn’t an amazing game but a draw away in the group stage isn’t bad. September also resulted in the first defeat of this Fornas era. 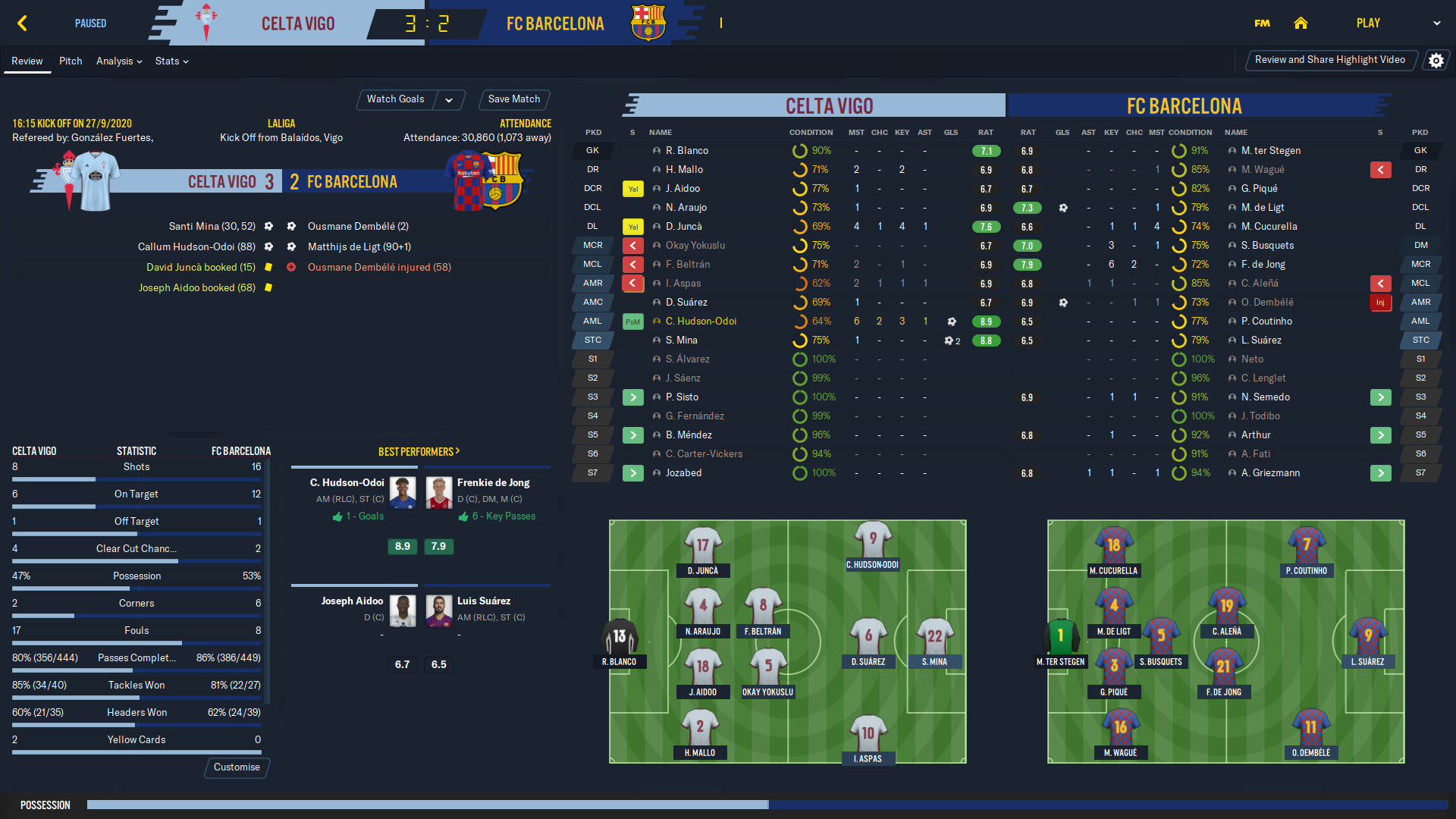 Messi was injured again for this one and Barca struggled to find a hold of the game, they haven’t won in Balaidos since 2015 which includes a 4-1 humbling in that same year and a 4-3 in 2016. They have gone 5 games without winning here. The month ended on a high with a first win in the CL against the Russian side.

Borja Fornas – It’s tough to take especially after going ahead but they showed us what quality they have, and we have to be able to react better than that. We can see they got the 3rd because we where pushing up looking for the equaliser but we didn’t focus on simple defending here. We missed Messi and it’s a shame he’s picking up these knock, as of now we aren’t clear how long he will be out for. The whole team is looking forward now we have a big game in the CL and then October is a tough month against top teams.

14/9 Transfer news agreed by clubs, announced to be made in January

Only FCB Officials are allowed to look

Kylian Mbappé will join FCB in summer 2021. After a further summer of trying to get Neymar to return Bartomeu needed a big signing to sign off his presidency. It’s a large outlay that was made available due to the limited spending in the summer and huge sales. Mbappé is the most exciting player since Lionel Messi arrived on the scene, a man who won a world cup at 18 years old 4 league titles in a row with two clubs. The title that he has yet to grasp is the CL and he has one last chance to win it at his hometown club.

This needs to change 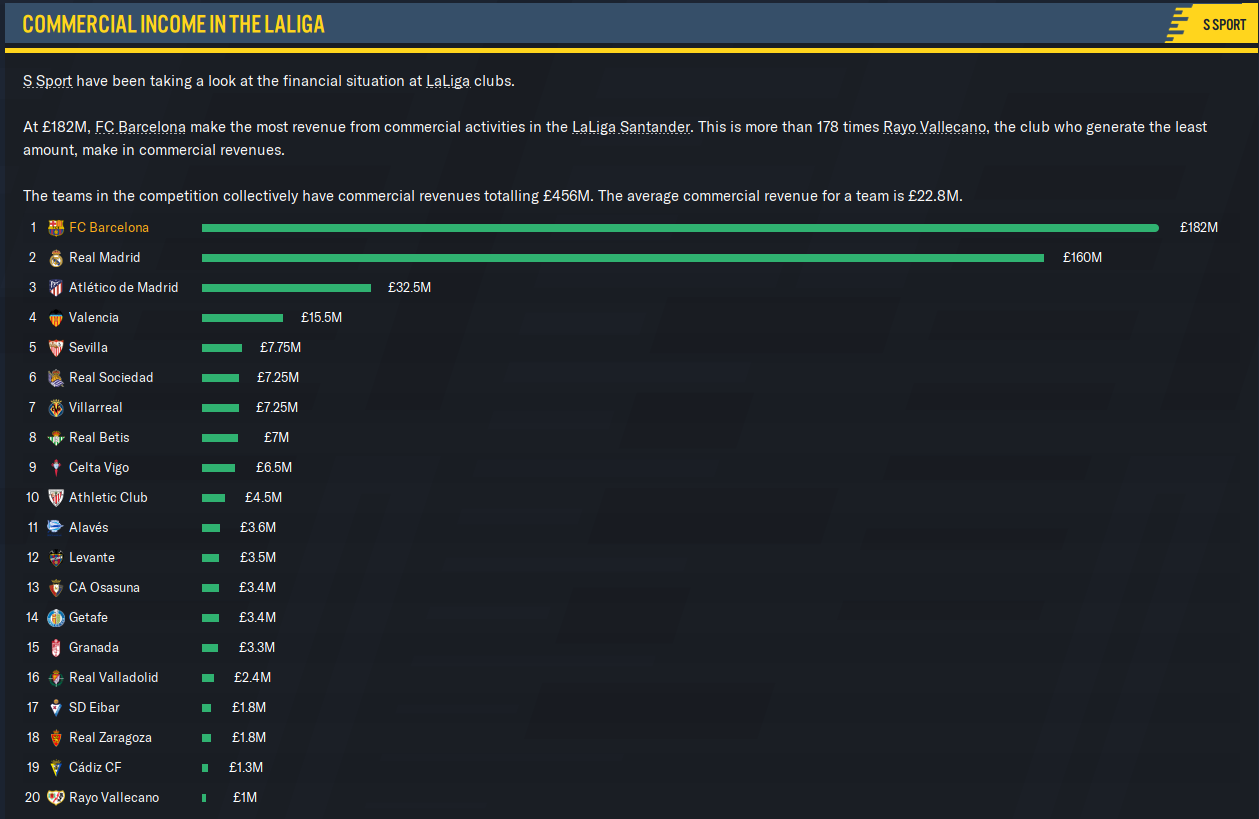 This doesn't for us but the transparency of the top 2 compared to everyone else is baffling!
Login to Quote

What a job José Bordalás has done in his 4 and a bit seasons at Getafe, winning promotion to the top flight in his first season and into CL last year. But, they sit bottom of La Liga and the club made the change.
Login to Quote

ScottT
1 year
A decent start. Barcelona do need to win a way of winning without Messi though. Their record without him is quite questionable. Though that is understandable given his immense quality!
Login to Quote

2020-04-08 19:04#268386 ScottT : A decent start. Barcelona do need to win a way of winning without Messi though. Their record without him is quite questionable. Though that is understandable given his immense quality!


Certainly! The injuries are a worry