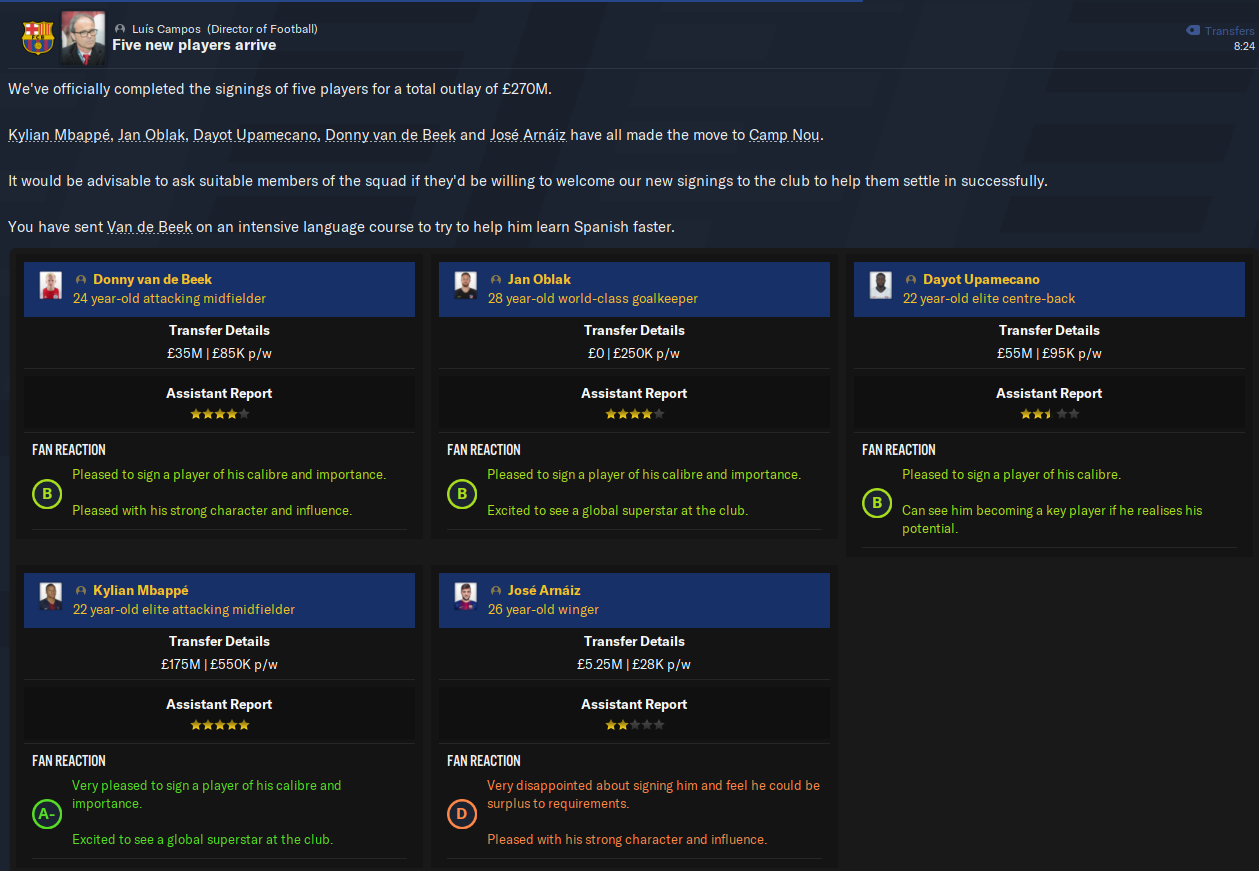 2019 CL semi-finalist Donny van de Beek joins the likes of Frenkie de Jong and Matthijs de Ligt in the Barcelona team.
Bundesliga winner and young French defender Upamecano is a rising star in the centre of defence. He will have to work hard to replace the club legend before him.
Arnaiz had a good season with Leganes scoring 13 and assisting 6, so the buy back option was taken up.

Oblak was signed as soon as I saw he had 6 months remaining. It's in the hope of being able to sell him on. It might go wrong with what I promised him but he is one of the best keepers in the world and I I have no idea why he didn't sign a new contract at Atlético.

Kylian Mbappé breaks his own record becoming the 2nd most expensive player in history, dropping his 2018 PSG total move of £159m to 3rd. The 22 year old had a breakout season for Monaco in 2016/17, before moving to PSG on an initial loan. He has won 5 Ligue 1 titles (in a row), Coupe de France 3x, Coupe de la Ligue 2x, Trophée des Champions 2x and the World Cup, but the Champions League still eludes him. (I say still, he is 22 for goodness sake!) 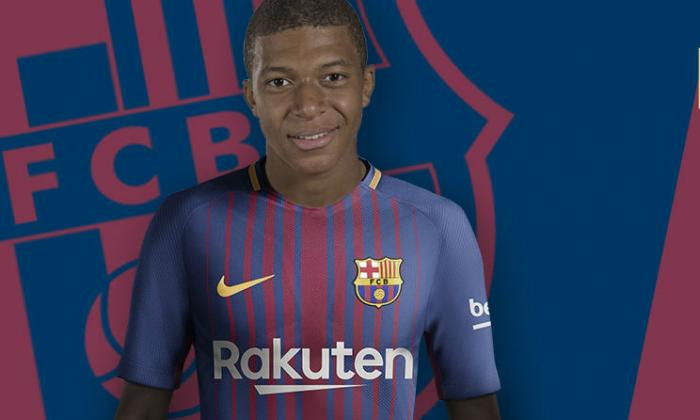 Kylian Mbappé – I have had 4 wonderful and successful years in Paris, which was always a dream of mine to play in the red and blue jersey. But I felt after 5 years in France I needed a new challenge. I made some lifelong friendships in my time there and shared many joyful moments.

It is an honour to arrive at such a prestigious club with European pedigree that has been shown in full this season.
I want to help my teammates and be part of a team with the highest objectives and I have found that here in this beautiful city.
I will give my all for the shirt and Culés and hope to be here for a very long time.
Visca El Barca

Borja Fornas – These signings show the ambition of this club continues and its want to be better. Me and my staff are excited to have the opportunity to work with the players again very soon and we aim to please this season in every way.

Josep Maria Bartomeu – “It is an honour to present these signings together. We believe as a club they show the ambition we have to continue to bring in the most exciting young players in the world and to watch them grow into the world’s best players.

There will be a new president incoming this summer to decide the next direction of the club, the current board has been open with others close with the club to help make these decisions now.
It has been an honour to be in this position since 2014 and I hope that the FCB family continue to work hard and enjoy success on and off the field.

Trophies won by club during presidency

TOTAL: 15; Second Most behind Josep Lluís Núñez 30
Login to Quote

ScottT
2 years
This team is about to reach new heights.
Login to Quote

JmG88
2 years
Some great writing in this story, keep it up!

Well done with the success you've had so far, and great work with the new signings. Some statements made with those. Who has been sold, if anyone?
Login to Quote

Exactly what we want from the B team, pushing at the top of division 2. It means we can keep young players happy whilst developing them at the club.

Moriba is one of the standouts with 9 goals from midfield. Maybe next season on loan at a higher level and he will be pushing for starting XI.

Oriol Busquets is another player who should really be at a higher level but i'm not sure what to do with him.

Cuenca in the centre of defense has been useful throughout the season but might need a change of scenery.

ScottT - We want to win everything!

Sales will be shown at the end of the window, as I feel we have all the additions needed arriving early.
Login to Quote

ScottT
2 years
Encouraging signs for the future!
Login to Quote

Oh no! Another president is buying players the club doesn't need and hasn't got room for!

We signed Van de Beek and Upamecano this summer already, where will these play?

Iván Álvarez (President) - It is a great privilege to be leading this club into a new era. We have enjoyed a historic 15-20 years with this club and my aim along with the members of the new board is to see that continue.

We have spoken to Fornas and his staff who are preparing for the new season and we are excited for what they can do in year 2 of their journey. As always at FC Barcelona are objectives are said plainly. Win!

Thank you for giving us this opportunity, we are truly honoured to be in such a position.

ScottT - Not much hope with this board at the moment

Again pre-season was taken by Fornas' assistant Van Basten. A tour of America was interuppted early August by Piqué's testimonial, which proved to be the only defeat of our friendly list.

We then followed in the footsteps of FCB's dreadful planning and carbon footprint with a return to America! Only to return to Europe (Belfast) for 11/8 fixture for the UEFA Super Cup match. Barcelona face EL winners and the team that knocked us out of the CWC. Atlético Madrid. 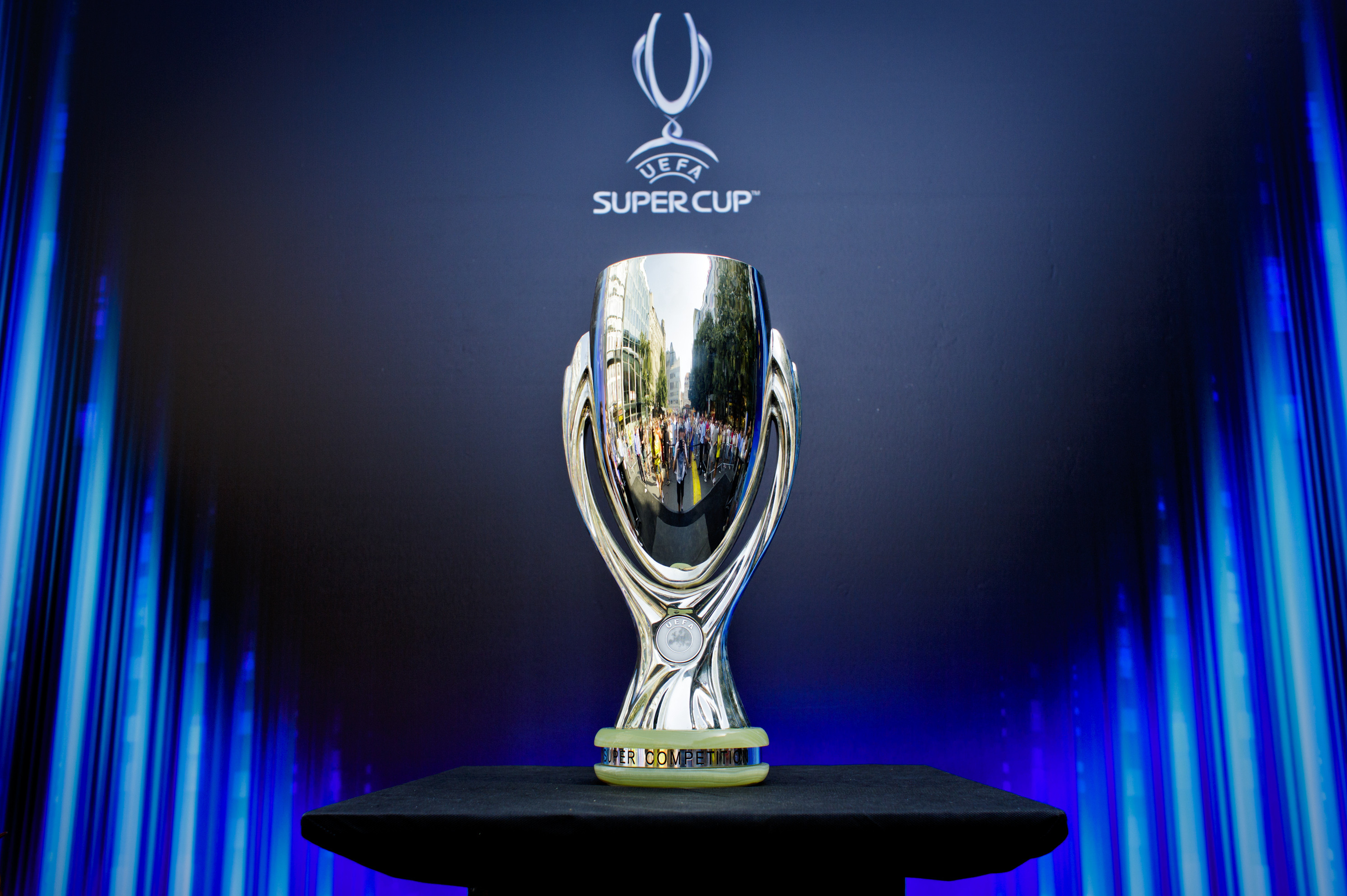 ScottT
2 years
There are worse problems to have than your board signing two world-class players!
Login to Quote 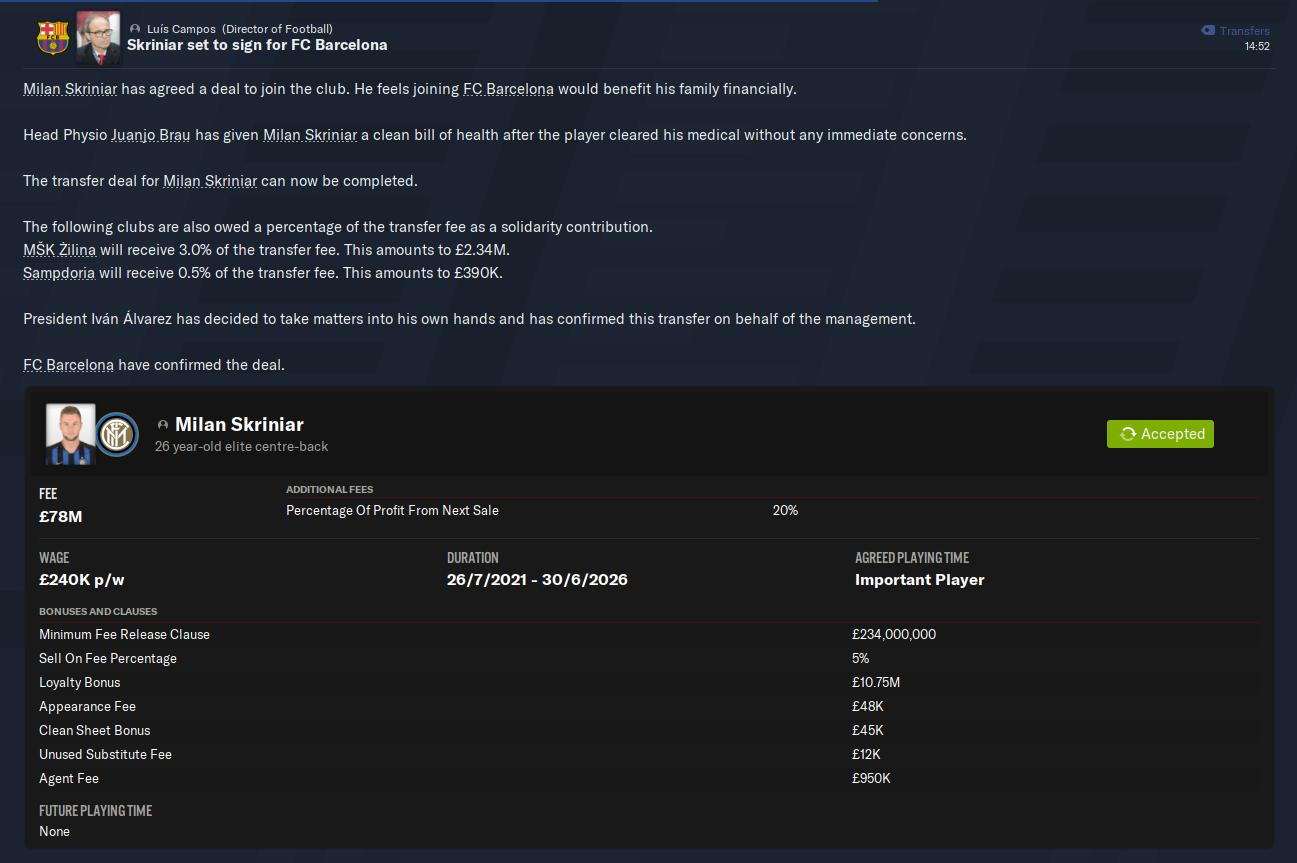 The board have made the signing and now we are stuck for choice in defence. de Ligt has his place secured at RCB, so Skriniar, Upamecano and Lenglet battle it out for LCB!
Upamecano and Lenglet are on less than Skriniar combined! The concern is our wage bill, some other high profile players will be out the door by the start of the season.

JmG88 - I think it's Bartomeu's cousin

ScottT
2 years
There don't see to be many frailties within the squad at all with all these world-class players coming through the door. I'll be surprised if the title doesn't return to Catalonia and there isn't a strong bid for the Champions League.
Login to Quote

JmG88
2 years
Wouldn't surprise me... got them thinking what's going to happen in my save haha!
Login to Quote 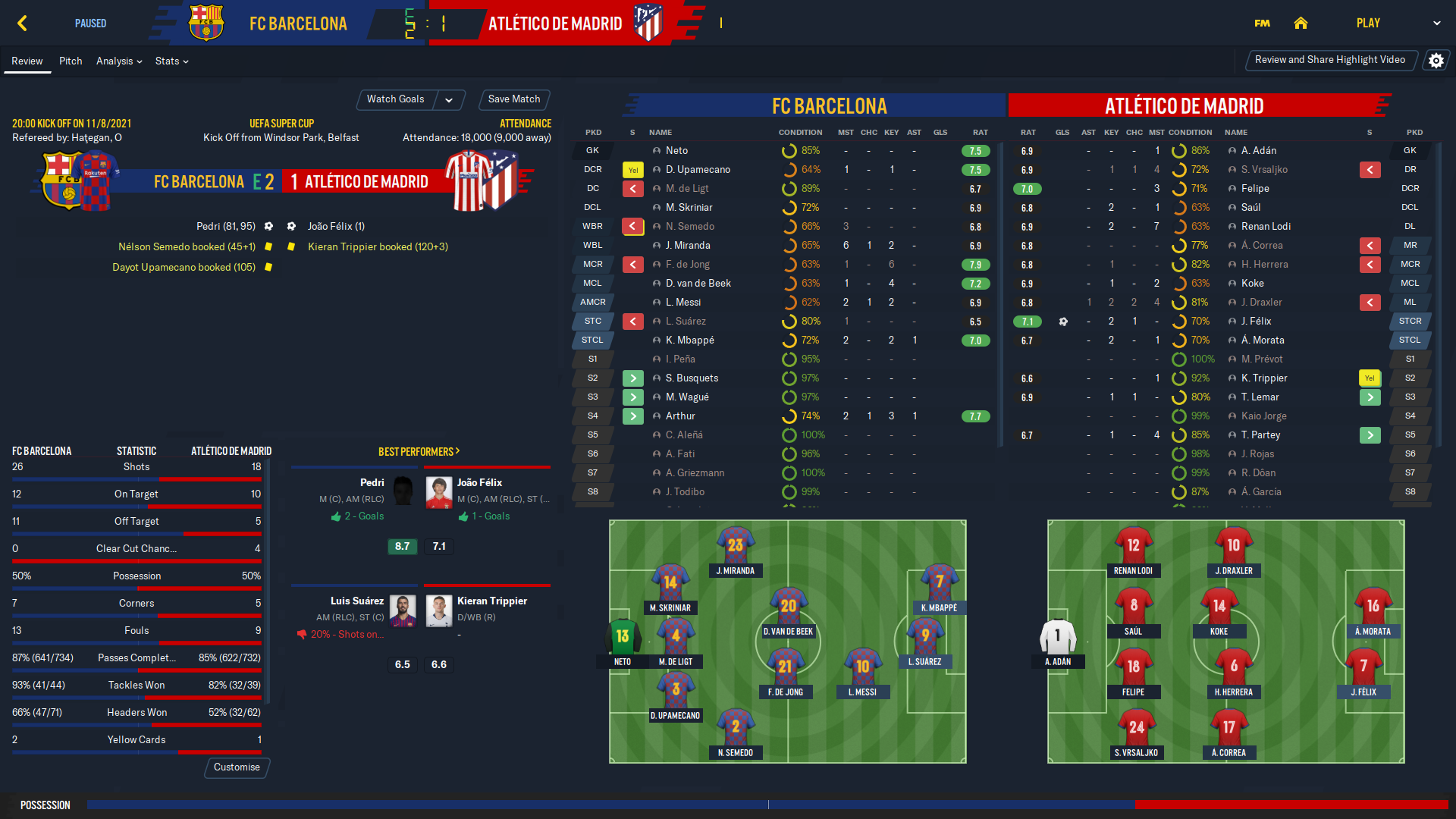 Barcelona win a record 6th UEFA Super Cup with two goals from substitute Pedri, who looks like he will be having a big future with the Catalan club.

Big games to start the season off. We needed an injury time equaliser from our new defender (and what a goal it was), to prevent our first home league defeat as manager!

We can get excited about the new arrivals and their hefty price tag with the French wonderkid scoring 4 in 4! 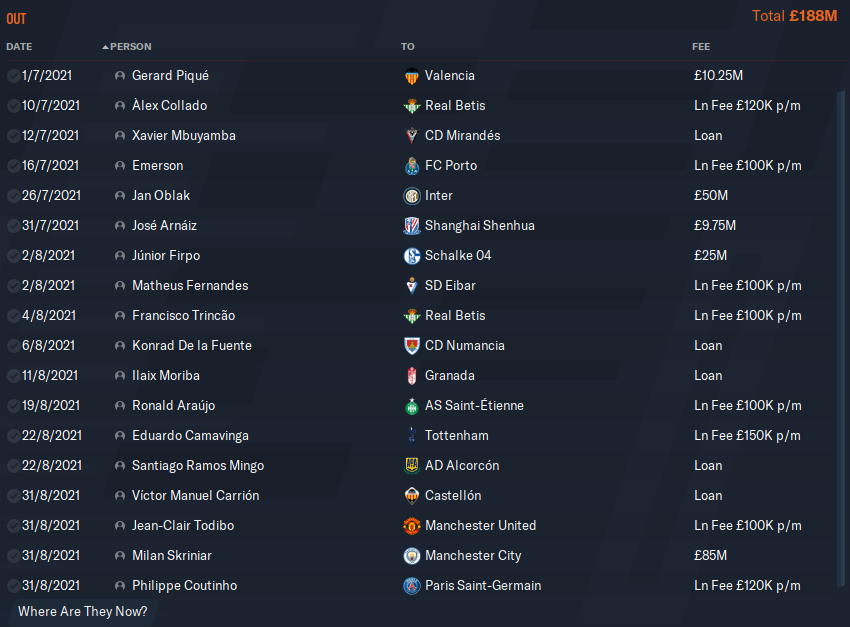 A lot has gone on this summer with the arrival of Skriniar to see him depart a month later.

(I couldn't help myself)

Camavinga joins the Premier League to test him at the highest level in a team pushing to finally win a trophy again.

Coutinho was very disappointing last season and nobody was paying what I wanted, so another season loan with PSG paying all his wages was the last attempt.

Borja Fornas – We have seen many players come and go this summer, but now it's time to stop speculation and talk about players future and concentrate on our season. I am very happy with the squad we have here and have complete faith that they will all work to their maximum to achieve what we want.

Scott T - We have built a team capable of challenging for everything!

ScottT
2 years
Shrewd moves in the transfer window. Congratulations on claiming silverware in the Super Cup.
Login to Quote

Jack
2 years
Mbappe, although he did take up a huge amount of money, is an essential in any world-class team. Some good results in there too, with another trophy to add to the cabinet!
Login to Quote