Trimindus
9 months • Edited
Started a game with Kilmarnock FC - ultimately my goal is to try and break the Old Firm domination, win a cup and to try and become a regular team in Europe.

Kilmarnock have a very limited budget, around 2 or 3 players who are worth £1million plus and other than that an ageing squad with a severe lack of depth in key positions. The plan will be to try and become a selling club and constantly looking out for young Scottish talent to then sell on to be able to reinvest for the good of the squad. Also keeping an eye on bringing in top quality loans from English Premiership youth teams.

Here is how Season 1 went -

Key signings in August and a major coup was Curtis Jones of Liverpool - a real talent who will play as our AML. He is taking up a huge percentage of our wage budget so a lot of pressure on the young man. We added Cian Flanagan on loan from Crystal Palace, a talented central midfielder who will add legs to an ageing midfield.

In January we became more active in the window as the season was going very averagely, we added Neco Williams from Liverpool as our right back after selling Stephen O'Donnell to Burnley for £1.2million. Stephen was out of contract in the summer and we just could not risk letting him go for free, we banked over a million which was almost 50% of the total clubs bank balance.

We then added Craig Sibbald, transfer listed by Livingston as a new centre midfielder and we signed Felix Nmchecha from Man City and Dylan Levitt from Man United - both on loan and both energetic attacking midfielders. Again we were forced into taking money from the board when we had to sell Greg Kiltie for £1.4million to Southampton, a shame to see him go but he was not wanting a new deal with the club , however we did manage to take him straight back on loan. Also leaving the club was club captain Gary Dicker, Mohammed El Makrini and Harry Bunn - influential player sat the club, but on £1k+ per week on the wage bill and time for them to move on.

Looking at the squad after this season we really need to try and invest some of the money that we made on Kiltie and O'Donnell - we have a huge number of first team starters who are on loan with us which does not bode well for our future growth plans. Onwards and upwards - a pretty average season and agony as we missed out on Europa League qualification on the last day of the season after a draw with Aberdeen. Trimindus
9 months
Season 2 rolled around quickly and we had a small amount of money to invest in the squad - it was evident we lacked any real depth at the club and to try and compete with the big boys we had to act in the summer.

We signed Harry Cochrane & Aaron Hickey from Hearts, Ryan Hedges from Aberdeen, David Turnbull from Motherwell and Kyle Magennis from St Mirren. All fantastic talents who I believe we will make a large amount of money on in the coming years.

We also added more loans with Curtis Jones coming back for a 2nd season from Liverpool after an impressive first season, Neco WIlliams also returned from Liverpool. We added Klimala on loan from Celtic to give Brophy some competition up front and added more loan signings with Coulson joining from Boro, Gordon joining from Everton, Branescu & Del Fabro coming back for a 2nd season on loan from Juventus and a major coup in adding experienced centre back Charlie Mulgrew for a megre £20k. Adam Matthews the former Sunderland right back also joined us to provide some experience at the back.

Notable players leaving the club were Alan Power and Nicke Kabamba - good squad players but taking up crucial wage spend. Going into this second season it is clear we are a very young side who have now implemented a more fast flowing style of football.

We finished 2nd place and qualified for the Champions League!

We won the Betfred Cup - adding a trophy to the cabinet for the first time in years.

Go the manager of the year award and Eamonn Brophy scored 40 goals in what was an outstanding season at the club.

A lot of this squad is now valued at a lot more than we signed them for and a lot of English clubs and the Old Firm are swooping around - it's going to be hard to do anything close to this season again but what a season it was. Sadly there is only around £400k available to invest in this squad for next year so we may need to shift on some of our talent and re-invest. I don't expect us to do anything in Europe but we will happily collect the cash - 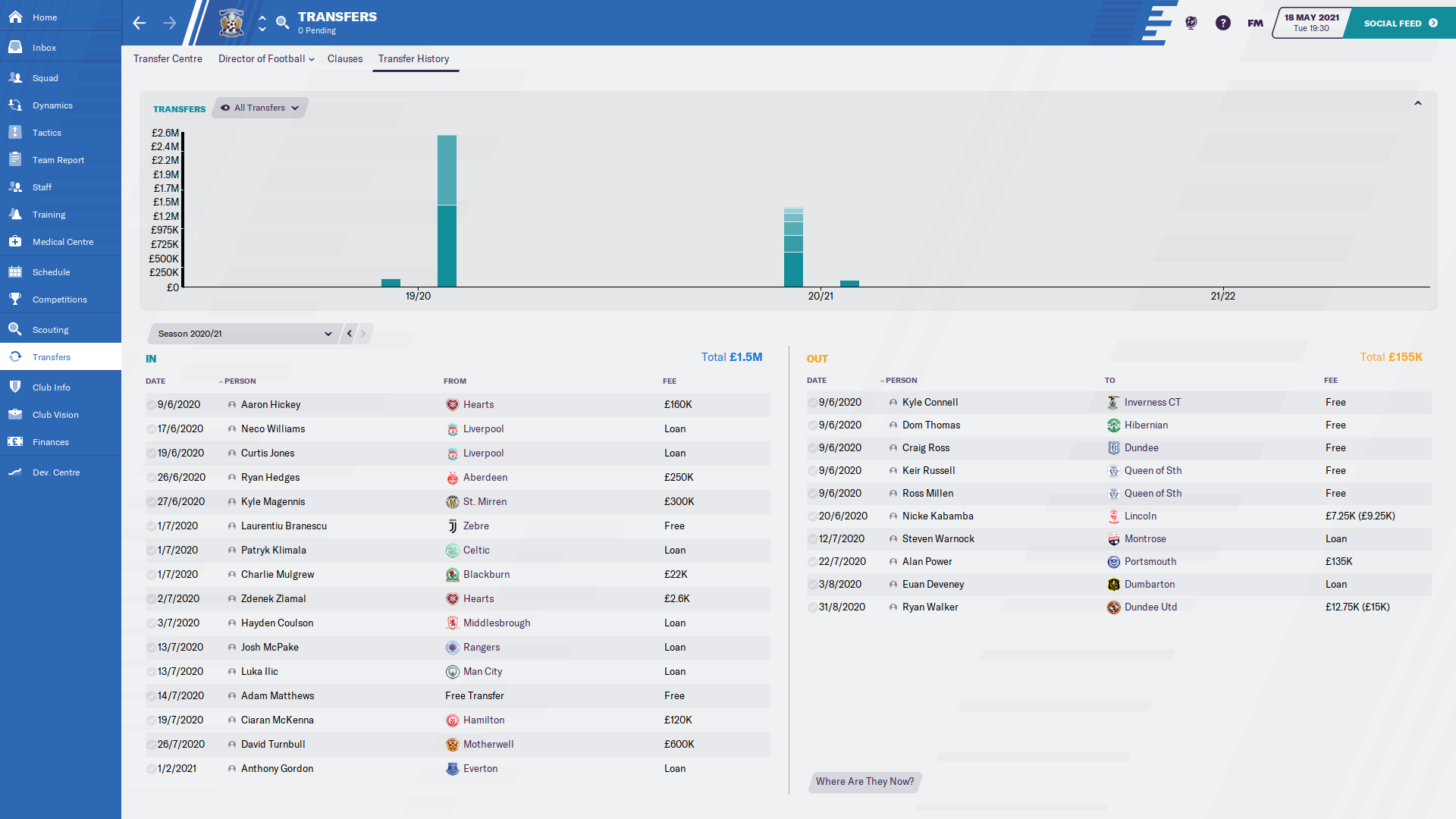 How about this from Brophy on the road to the final of the Betfred Cup where we beat Aberdeen 5-1 to lift the trophy. He scored 5 goals inside the first 30 minutes of the game - unbelievable and possibly some sort of record!? 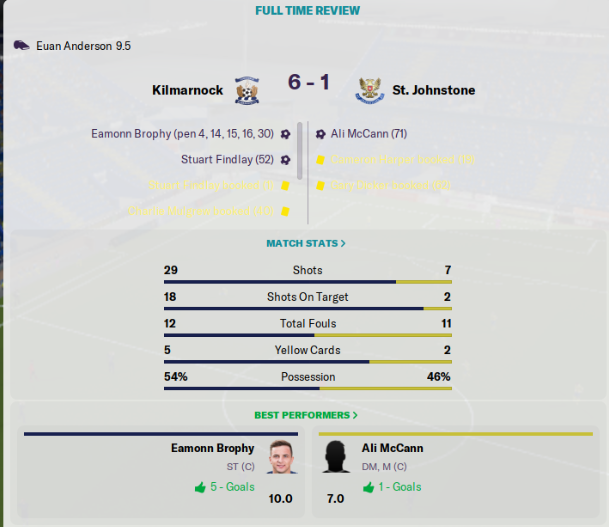 Big_Wully_Boly
9 months
Love the Scottish stories on here, Looks like you're doing a cracking job with Killie (best Pies in football BTW)
Any chance of seeing your tactic chief?
Login to Quote

CL0762
9 months
Good luck with that one, took me 4 seasons just to win the title with Hibs - Celtic are just so difficult to try and catch on this years game.
Login to Quote

No problem mate, attached below for you. When I took over this was a very defensive minded squad, with a lack of flair/energy and just seemed a bit slow and lethargic. The additions of David Turnbull, Harry Cochrane and Kyle Magennis in the middle of the park - flanked by Curtis Jones and Ryan Hedges has really transformed us and has got me playing good attacking football. We have got found out a few times at Ibrox, Celtic Park and Pittodrie but I am prepared for that so early in this journey. I think i forgot to mention young Illic who is our main shadow striker, he has been brilliant and joined on loan from Man City.

Mulgrew and Stuart FIndlay were great at the back, Mulgrews set pieces won us countless 3 points and sadly he has decided to retire at the end of this season. Young Hickey has made the left back spot his and Neco Williams from Liverpool at right back has been a solid replacement for O'Donnell. Brophy chipping in with 40 goals this season has some top sides after him at around £8million - probably be forced into selling him and may try and get Shankland but will see. 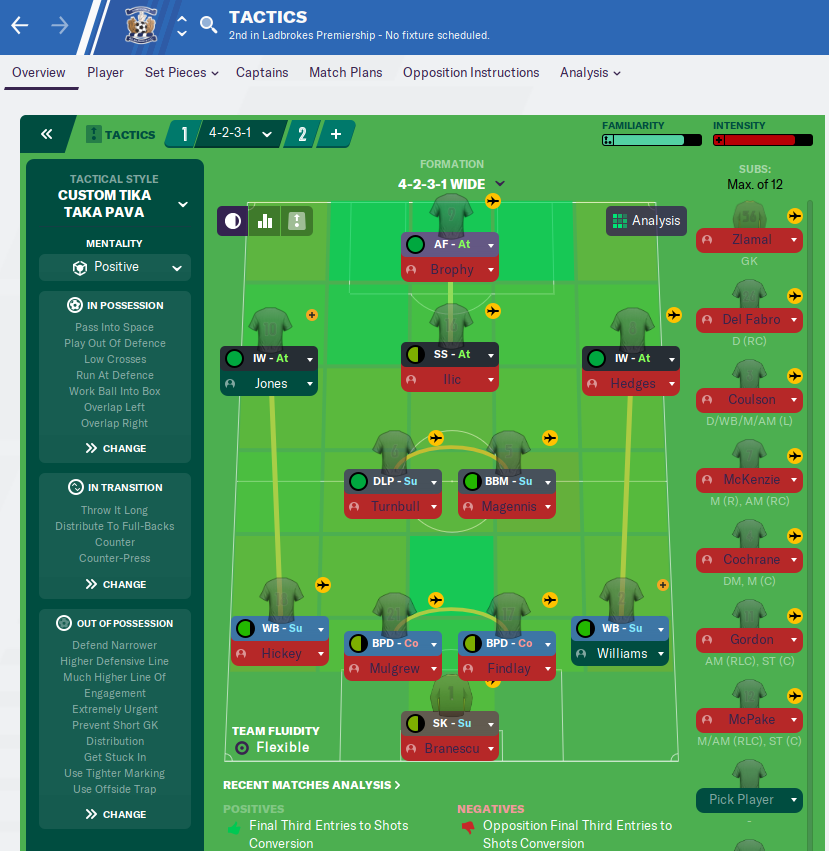 Thanks mate, after season 2 the only current Killie players that remain are Findlay, Brophy, Innes Cameron and McKenzie. I signed Branescu permanently as well.

The board have agreed to upgrade the stadium and training facilities as well. Will be hard to replicate this season as finishing 2nd and winning a trophy was what I expected to be doing in 3-4 seasons.
Login to Quote

Totally agree mate - I have beaten them once in around 8 games. They have signed Scott McTominay and Kieran Trippier as well which makes it even more impossible. They pay McTominay more in wages that my whole squad combined which shows you the gulf and the challenge.
Login to Quote

Totally agree mate - I have beaten them once in around 8 games. They have signed Scott McTominay and Kieran Trippier as well which makes it even more impossible. They pay McTominay more in wages that my whole squad combined which shows you the gulf and the challenge.

In my second season they spent £110m including £26m on Saint-Maximin from Newcastle & £17.5m on Trossard. In comparison my best signings in my second season were Gilmour & Clarke-Salter on loan from Chelsea. It was doing my head in that I just couldn't get near them.
Login to Quote

CL0762
9 months
PS Whatever you do get Liam Smith involved ASAP, I've got him in my Hibs save and he is absolutely tremendous.
Login to Quote

Trimindus
9 months
Season 3 has started with a bang already, day 1 of the transfer windows sees Celtic Skipper Scott Borwn joining us on a free. I think his experience will be fantastic, especially in Europe next season and ultimately I want him to join my coaching team.

This has also happened, Derby County have come calling. last season they finished 20th in the Championship. Looks like a real rebuilding job needed. Thoughts guys? 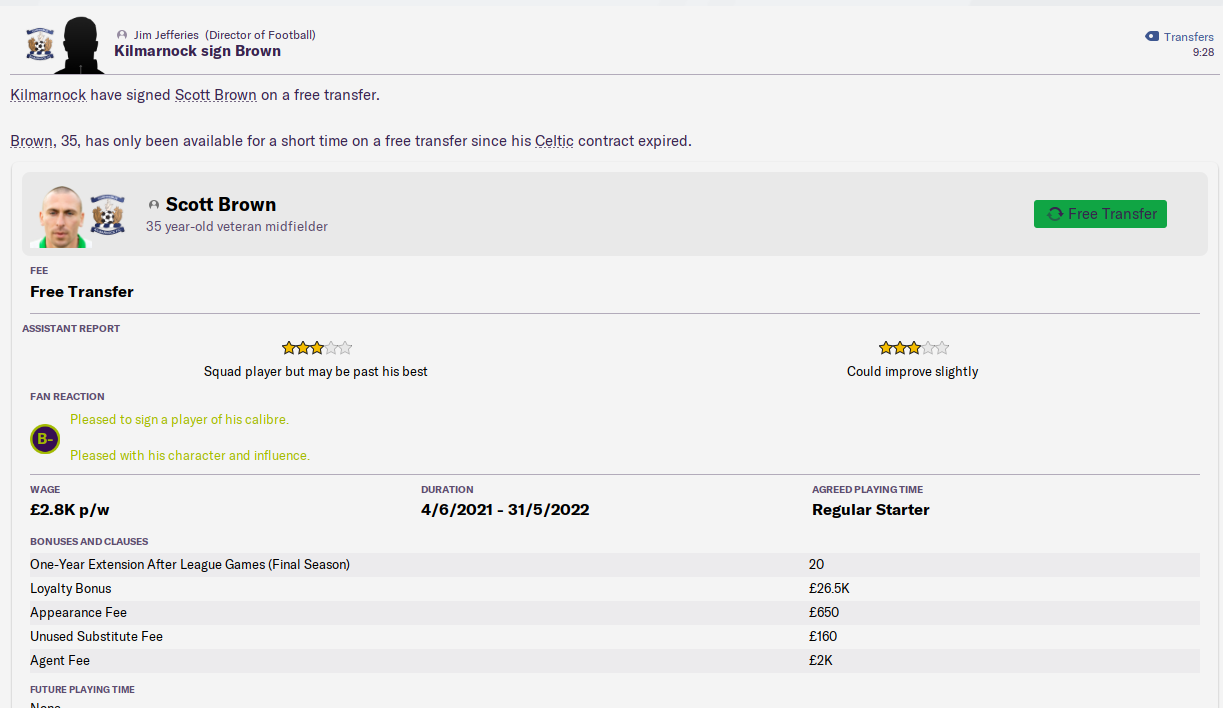 ScottT
9 months
A good start so far. I would like to see you stick it out with Killie for the time being.
Login to Quote

Trimindus
9 months
Season 3 has already started with a bang, after turning down Leeds, Brighton (playing in the Premiership) approached me with a transfer budget of nearly £55million. Seriously debated it but how could I leave Kilmarnock after last season. May live to regret it but the goal will be to take this team as far as possible and it is early days in the journey.

Our first game in Europe was a very difficult qualification draw against Victoria Plzen - we were massive underdogs in this game. They battered us at home but we still managed to sneak a 2-1 victory and then done the business away from home 2-0. We are now through to the next qualification game - sadly against Lyon.. don't hold out much hope but great experience for the team.

Transfer wise I have went for more older wise heads this window - it goes against everything I said I wanted to do but I feel playing in Europe and with limited spending cash it was the only real option.

Joining Scott Brown (who is now club captain), is 35 year old Wayne Rooney from Derby and 38 year old Jermain Defoe from Rangers, and 30 year old Kyle Bartley from West Brom. All joined on frees and will join as squad players providing experienced backup and hopefully can still show some class.

Loan deals we moved for 3 x Liverpool players in Harvey Elliot, Liam Millar and Neco Williams. We took the talented Billy Gilmour on loan from Chelsea and Jeremie Frimpong joins from Celtic. 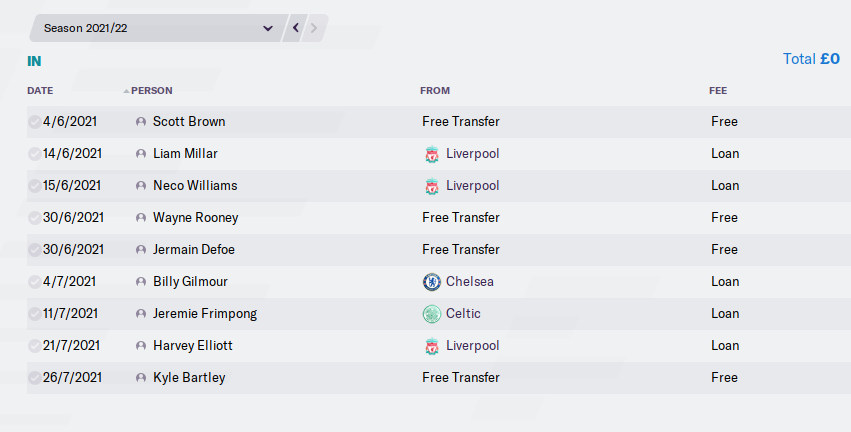 jahendricksi
9 months
Bartley is a good signing and should help your center of defense with Mulgrew retiring. Dunno how to replace his set pieces as his corners and particularly free kicks were outstanding and worth having his slow self in your lineup.

Lawrence Shankland is pretty streaky as a lead striker and would not replicate the form Brophy was showing. There is a Dundee Utd save on here that had troubles with him, I had trouble with his performances on my FM Scout Scotland save, so I would recommend against him. If you are looking for local, young, cheap talent at the Striker position Jack Aitchison can (surprisingly) do OK but there is usually a newgen that comes along at that position and goes bananas. Scout for young strikers and you'll find the guy: it happens every Scotland game I do in every version of FM for the past 4 or so years (so we are talking 20+ games).
Login to Quote

You are reading "Ayrshire Killie - Taking on the Old Firm".