JmG88
1 week
Foreward I don't intend on this being an in depth story with great narrative like the rest of the people on here have done. Too much effort for me, but I'd like to use this at least to just share my save. I've been playing FM since it's incarnation until FM17.... took quite a break but started up a new save just after lockdown and kept that going, but FM20 sale came on and I snapped it up.

I decided to start a save with Barca, this is my go-to team as a lifetime fan (Yes.. I live in Scotland and support Barca, no I'm not a glory hunter lol).

A bit generous in the qualifications to start, I know. 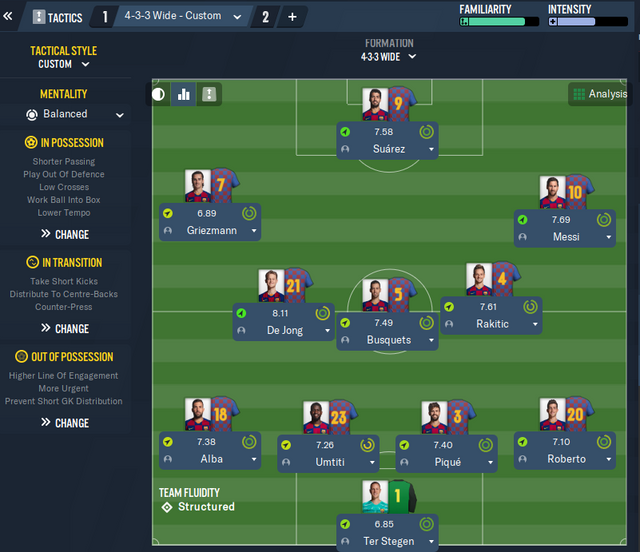 Haven't purchased any players, started with the default budget of £8m... so wasn't doing anything fast with that, did sell Arda Turan though for a record breaking 750k (yaay!) 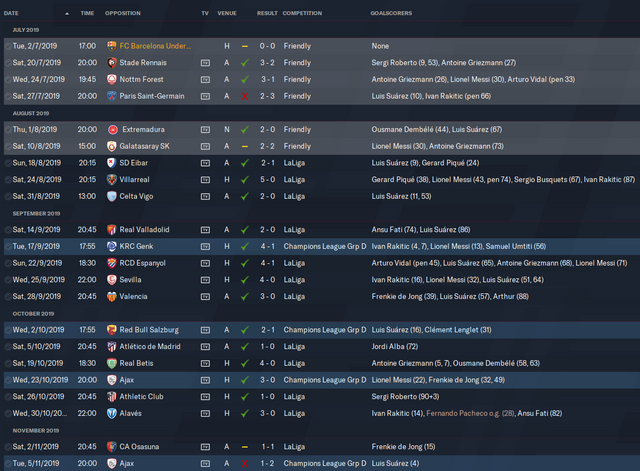 Friendlies were Ok, all things considered. I had set out my tactics and roles, familiarity at that point was pretty low. The game against PSG I lost 3 goals in that last 10 minutes of the game, disappointing of course, but again, not too bad a result. After that it was good going, last 2 games have been my worst run of form though, a draw against Osasuna (20th) and first competitive loss against Ajax, that game was a little frustrating to watch, a number of players just weren't up to scratch, but we'll move on from that.

For those interested. The game isn't really relevant, there's times I'll just save the game and leave it running. No editor.

So far so good, I don't have any specific thing I want to do, I may only stay a single season and move on, if I'm not sacked of course, and there may even be a job I see and want to go for, have never had a problem going to much lower teams, In a previous save I was at Arsenal (was 10+ years into the save) and applied for a vacancy at Sampdoria who at the time were struggling to avoid relegation.

ScottT
1 week
Fairly comfortable, as to be expected.
Login to Quote

TheLFCFan
1 week
A disappointing result against Ajax, hopefully that can be turned back around soon enough. Apart from that result, a good start for sure!
Login to Quote

Another draw came around from taking a risk and resting a number of players, and playing quite a few youth in their place.

Board dished out £64m to spend, need to bolster FB positions so will see who I go after in the next few weeks of the game.

I do have a transfer that was already set in the game when I joined the club. Not sure what I'll do with him though, he's of similar ability as some of the young players I have coming through.

ScottT Yes mate, they've taken quite well to the tactics.

TheLFCFan Agreed! We were outplayed in that game. Apart from the draw it's been good results, though curious how tough it will be against Madrid. Granted we have the 8pt gap but definitely expecting a really tough game, especially away from home.
Login to Quote

ScottT
1 week
The back-line doesn't appear to like conceding all too often.
Login to Quote

Justice
1 week
Doing quite comfortably - trophies on the horizon!
Login to Quote

TheLFCFan
1 week
A strong lead to get started, hope it continues.
Login to Quote 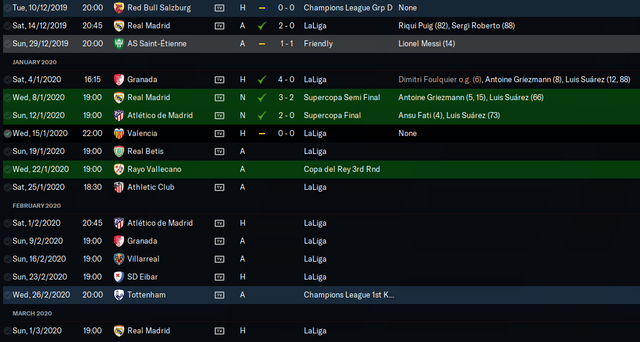 Some great results there, especially taking 3 points away from Madrid. Then winning the Supercopa by defeating the top contenders. I think Real were a bit upset with Griezmann and decided that after his second goal in the Supercopa game he wasn't to have a chance at a hat-trick and took him out of the game. He's still got another 2/3 weeks left and Umtiti is also out for another week or two also. 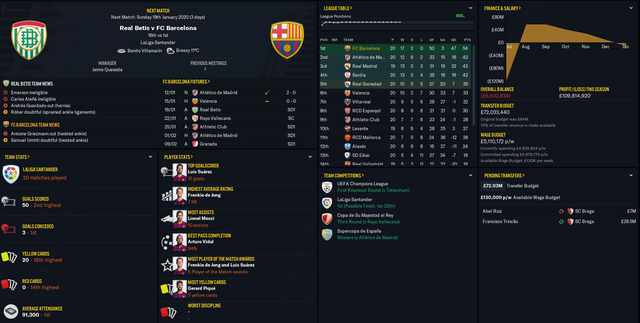 Sold Braithwaite for £12.5m thankfully, he's off to Brighton.

Stuck on what's happening in the transfer world though, I've got enough to do for the rest of the season, barring any serious injuries of course. With loan players coming back, Coutinho, Wague, Pedri and others, pretty much solves the depth problems I have. The irony of this kind of club is the board isn't happy that I haven't signed any high-profile players, only position I can think of for that is Striker, or maybe midfield if a good offer comes in for Rakitic, but unlikely.

Thanks for the replies.
Login to Quote

Wolf
1 week
Although I love Real since is was a little kid, I wish you luck with the second place!

Well Dembele is coming back from injury, hopefully stay that way for a bit longer. He's been out for 6 months combined with all injuries this season so far.

Didn't deserve the result against Betis, despite getting the draw it was a poor game for us. Getting very complacent against the lower sitting teams. Dropped points against Osasuna, Betis and Leganes.
Picked up form afterwards, culminating in the hammering of Atletico Madrid where Pique put the nail in the coffin with a screamer from the edge of the box.

Then it was back to the El Classico

I know I'm playing with a high quality club and yeah for most it's not as exciting but I still get tense in these situations, especially El Classico! Even though I was without Pique and Lenglet due to suspension it was a very even game and a lot of back and forth. Cuenca was brought on in extra time as a bit of fresh legs and when he scored the header I thought that was it, because we were still pushing, but Casemiro was left was bit of space and scored a daisy cutter from 20yards, quite gutting at the time but then came the penalties, and from the amount, I'm sure you can have some sympathy LOL

Athletic put in a performance in defensive quality as we got enough shots on goal, just couldn't put them away, hoping to overturn that in the return leg.

Looking forward to the Spurs game and of course another El Classico this time for 3pts in the league at steak.


ScottT Agreed mate, they came in with £9m offer involving addons, I removed them and put it to £12.5m and they accepted.

Wolf Sorry man, they're now 9pts behind, not too difficult to catch up though but it would need to be a serious dip in form in the league for me. I'm fighting against the complacency when against weaker teams so hopefully no more dropping points that we should be taking easily.

thanks for the replies
Login to Quote

ScottT
1 week
A very dramatic victory in the El Classico!
Login to Quote

Justice
1 week
Aside from the cup game against Athletic, it’s been plain sailing!
Login to Quote

Wolf
1 week
This looks like the title is yours, those both wins against Real are putting you on golden chair
Login to Quote