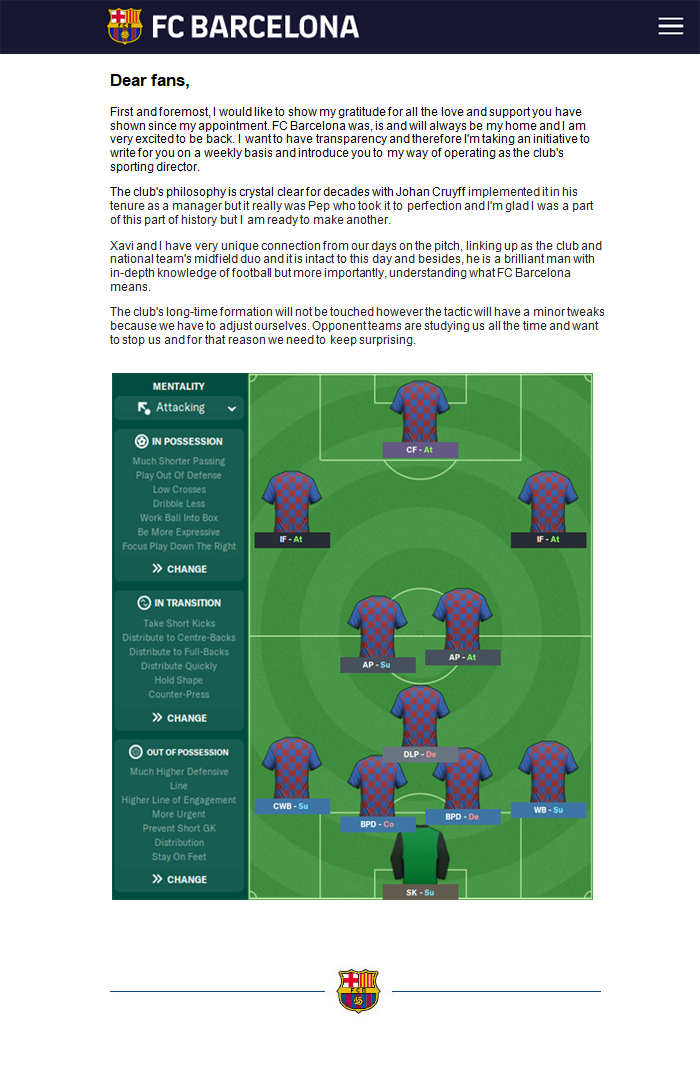 @TheLFCFan; I agree, he has brilliant stats and his style matches the club's philosophy.

@ScottT; Yes, I trust them to handle the training and matches while I dictate where the ship goes.

@P19END; Thank you, I appreciate the comment.
Login to Quote

ScottT
1 year
A return to a style of play that certainly represents Barcelona.
Login to Quote

TheLFCFan
1 year
Iniesta doing something that not many do, being transparent at the top. It's good to see him ensuring the fans know what is happening at the club at all times!
Login to Quote

ML Scouter
1 year
I'll be following this story with interest, especially after last nights result that has probably relinquished the title

It's something the club obviously lacked lately. Now I'm not sure such a transparency is suited fot real life top-club hey, I call what happens here.

2020-06-28 14:20#275096 ML Scouter : I'll be following this story with interest, especially after last nights result that has probably relinquished the title

Yours has been an inspiration. Glad you like mine too. I hope this goes better than last night.
Login to Quote

ScottT
1 year
Still getting my head round Braithwaite being at Barcelona.

Nothing I can undo, unfortunately. Plus I started with first transfer window disabled so that's why he's still here.
Login to Quote 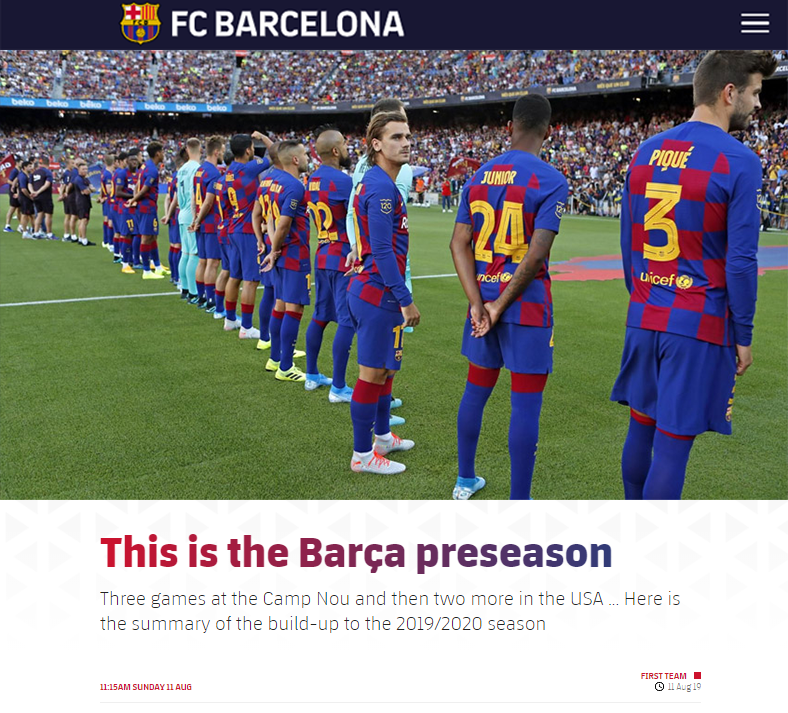 The first game saw our club hosting FC Utrecht in a relatively packed stadium for a friendly game, with just a little over 60,000 attendees watching the obvious, a pretty easy victory for the team. La Masia graduate, Riqui Puig, scored the opener with a placed shot into the bottom corner from within the penalty area in the 22nd minute.
It took five more minutes before Jordi Alba rised to head in a cross coming from the right wing and the scoreboard showed 2-0. Luis Suárez was the last to appear the scoresheet after an accurate penalty kick in the 49th minute. 3-0

The second game was an inner one, between the first team to Barcelona B and it was closed for the crowd. Luckily for them because the only worth mentioning highlight was an own goal by Ronald Araújo in the 87th giving the senior team a win late in the game. 1-0

The next game happened in Philadelphia, United States when the local team, Philadelphia Union, hosted us in a game which was nothing unlike the previous one.It had everything, goals and own goals, penalties, cards of all kind and unfortunate injury too.
17,030 spectators couldn't believe when the scoreboard showed 3-0 for the hosts after goals by Sergio Santos (7), Ryan Maloney (19) and penalty scored by Alejandro Bedoya (25). Barcelona responded with an inside-the-box volley by Ousmane Dembélé in the 30th minute but 4 minutes later, Elliott Carrillo, scored for the opponents.
Sergio Santos twisted his ankle in a sprint and was subsituted by Yomi Scintu in the 38th minute. Messi narrowed Philadelphia's lead to two goals late in the first half with a sensational solo run from the half-way line all the way to an outside the box shot making it into the top left side of the net.
The second half had some action too, starting with a penalty missed by Lionel Messi in the 58th minute. Then Philadelphia Union's sub, Yomi Scintu, fired a ball into the post and it cannoned off ter Stegen and into the net. 5-2. The last goal came in the 74th minute after their keeper failed to save a 25 yard free-kick by Lionel Messi but it was not the last highlight with Mark Lubahn sent off for a apalling challenge in the 88th minute, only three minutes after he came on. 5-3

Then we had faced Orlando City in front of 25,211 viewers at Exploria Stadium and it definitely was a better game for the team. Arthur scored the first with a powerful shot into the net 41 minutes into the game and the second goal happened 47 minutes later, in the 88th minute, after Orlando City's keeper, Pedro Gallese, got a hand to but couldn't keep out a shot by the club's new signing, Antoine Griezmann. 2-0

The last fixture in our pre-season was A.C Milan, travelling to play Camp Nou in front of 77,875 people which saw only one team on the pitch. Zlatan Ibrahimovic killed his team's chances with an early red card in the 15th minute after he hacked down Busquets near the centre circle. Barcelona registered over 30 shots in the game but only two came in, Messi's header to a cross by Jordi Alba after 31 minutes and an absoloute screamer by Arturo Vidal in the 87th minute. 2-0

Our manager, Xavi, commented: "We had a fine preparation for the season, the team jelled through this time and overall I'm very satisfied. Yes, we had a surprising defeat but we learned from that and the next game is an evidence to those who will face us in the future that we do not break so easy. I can say for myself that I am very confident, yet excited to see how this season goes for us."
Login to Quote

ScottT
1 year
The supporters in Phili must have been beside themselves in spite of it only being a friendly! Lessons are learnt though in time for the competitive fixtures.
Login to Quote

FC Barcelona's defence of their league title began in Mestalla with a visit to Copa del Rey winner, Valencia. Overall it was a pretty even contest with Barcelona edging out eventually, however it was Valencia's right-back, Alessandro Florenzi (4), who fired first with a well-executed free kick from just outside the penalty area. The Camp Nou went silent until Lionel Messi (29) scored his own free-kick from some way out, Cillessen could only touch the ball on its way in. After almost twenty minutes into the second half, Messi (64) has done it again and completed a brace with another fabulous free-kick. Three free-kicks turn into goals on a lovely opening game at Mestalla.


Barcelona returned to Camp Nou to host Celta de Vigo for the 2nd game of the season but failed to collect the points after a great defensive display by the opponents. Barcelona pushed Celta de Vigo back from the first minute but the shots failed to meet the net, Celta Vigo did not register one shot in all 90 minutes. Former player, Denis Suárez, had suffered a twisted ankle and got subbed off in the 47th minute.


The last game of the month took Barcelona over to Villarreal's home, Estadio de la Cerámica. The attacking trio of Messi, Griezmann and Suárez showed their value and gave Barcelona the win but it was the Blaugrana who conceded first thanks to inside-the-box left footed volley by the ex, Paco Alcácer (28). 11 minutes later and it was 1-1 after a successful penalty by the captain, Lionel Messi (39). The other two goals of Barcelona happened thanks to the combination of Griezmann assisting and Suárez scoring, first in the 76th minute when Griezmann centered a ball and El Pistolero reached first and tucked it in from close range. Then it happened again seven minutes later when Griezmann headed a cleared ball back into the box and Luis Suárez finished with a lovely volley into the helpless Asenjo's net.

FC Barcelona's manager, Xavi, had talked about FC Barcelona's first month of the season was: "I'm pleased with the results. Of course I wanted to pick all the nine points but I'd agree on 7 out of 9 if you asked me before the games. It is annoying we lost the points especially in home and when we were in absolute control of the game but that's football. I can safely say it is only the beginning and we're in for a great season."
Login to Quote 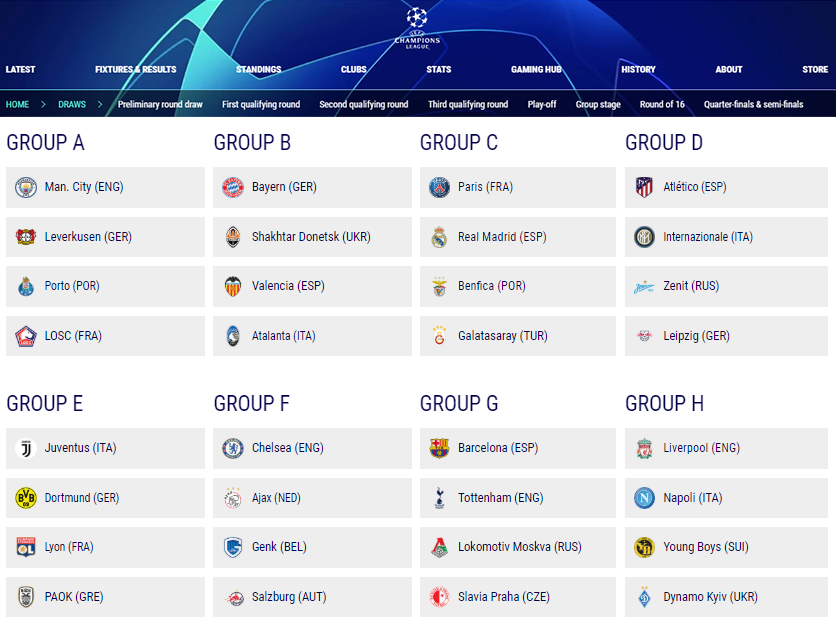 Liverpool will begin the defence of their Champions League crown with group stage matches against Napoli, Young Boys and Dynamo Kyiv.

The money-spinning contest gets underway on Tuesday, September 17, and the draw for this year's competition was held this evening.

European heavyweights PSG and Real Madrid meet in Group C, which is likely to see a return to French soil for World Cup winner Zinedine Zidane. 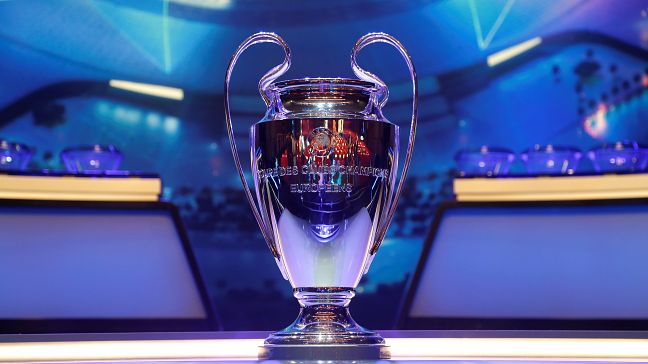 The final of this year's tournament will take place in Istanbul on May 30, 2020.
Login to Quote

TheLFCFan
1 year
That is a very favourable group with only Spurs being possible contenders to touch you. The league has got off to an alright start with the dropped points against Celta a slight disappointment. Enough positives though so far!
Login to Quote

ScottT
1 year
I think Barcelona will be pleased with that group.
Login to Quote