2020-07-01 20:02#275363 TheLFCFan : That is a very favourable group with only Spurs being possible contenders to touch you. The league has got off to an alright start with the dropped points against Celta a slight disappointment. Enough positives though so far!


Indeed, a pretty easy one. As for the league, it is a bit disappointing to drop these points but it's just the beginning.

Obviously. I can't see us anywhere but at the top of this one.
Login to Quote 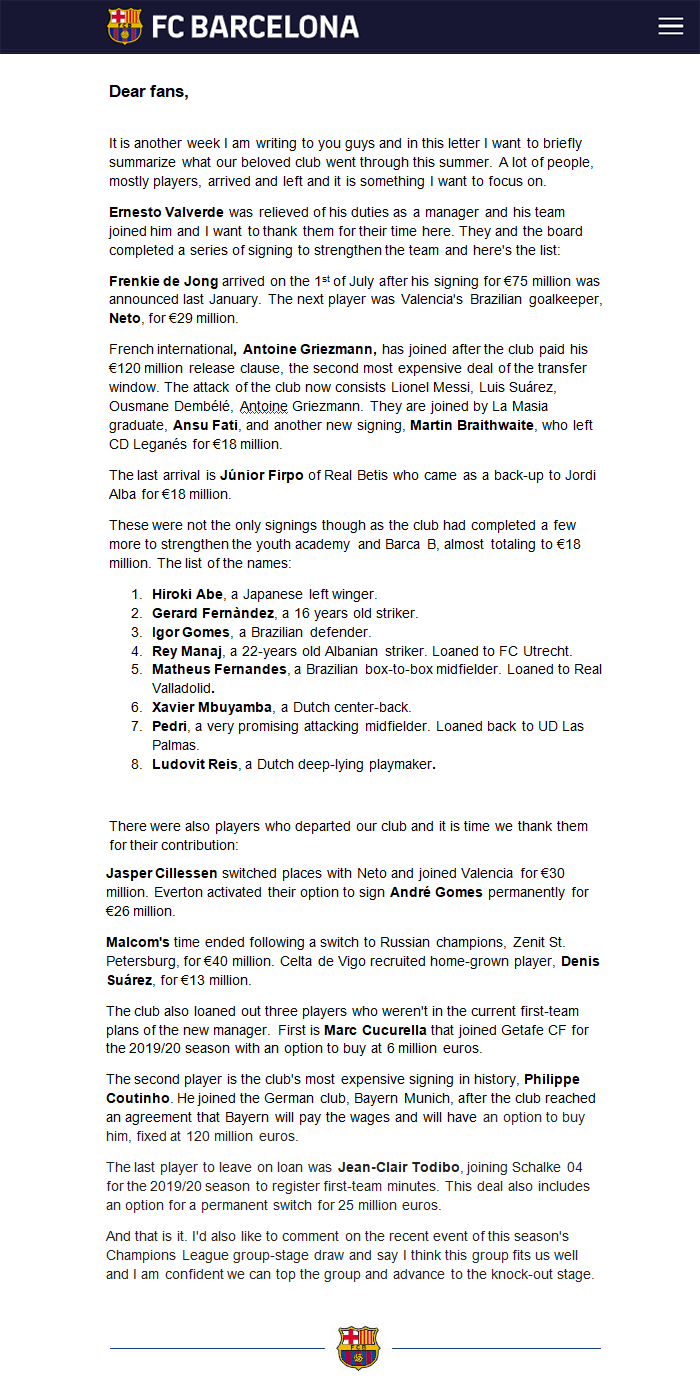 ScottT
1 year
The club definitely had an eye on the future whilst breaking the bank to bring in the likes of Griezmann. Firpo will be a fantastic understudy to Alba.
Login to Quote

TheLFCFan
1 year
Very much looking forward to seeing if/how Fati can force his way into that attack. Used right and he will be a world class player for a number of years.
Login to Quote

J_ames
1 year
Just read this from the start. Iniesta is a great choice to lead the club behind the scenes: his knowledge of the club, and his love for it, will mean that everything done will be in Barca's best interests. There's been a lot of changes already, for the better it could be suggested, and the future should hopefully be a bit more stable for the club. With you restoring the link between the first team and La Masia, the real fans of the club should be pleased, although there'll still be those mongs saying 'wHy ArEn'T wE wInNiNg EvErY gAmE 37-NiL?" unfortunately.

The club has loaned out a lot of players in the off-season just gone, and I'm surprised that there's a €25m option in Schalke's favour for Todibo. You could definitely have gotten more if you'd been able to do the transfer yourself!
Login to Quote


I'd do things different but only time will tell for you as updates keep coming.

Fati's a world-class material, it's well-known but he needs to be groomed well. I have no intention of rushing him into the first-team over better and mature players just for development. His time will arrive.

2020-07-04 03:31#275531 J_ames : Just read this from the start. Iniesta is a great choice to lead the club behind the scenes: his knowledge of the club, and his love for it, will mean that everything done will be in Barca's best interests. There's been a lot of changes already, for the better it could be suggested, and the future should hopefully be a bit more stable for the club. With you restoring the link between the first team and La Masia, the real fans of the club should be pleased, although there'll still be those mongs saying 'wHy ArEn'T wE wInNiNg EvErY gAmE 37-NiL?" unfortunately.

The club has loaned out a lot of players in the off-season just gone, and I'm surprised that there's a €25m option in Schalke's favour for Todibo. You could definitely have gotten more if you'd been able to do the transfer yourself!

It's evident the board of Barcelona is not connected to its fans with their emphasis on signings instead of developing. Arthur and Pjanic is the most recent absurd call and it is something I want to see changed without even being a fan but as a football fan missing prime Barcelona. I cannot do anything about it so I make it in this game. 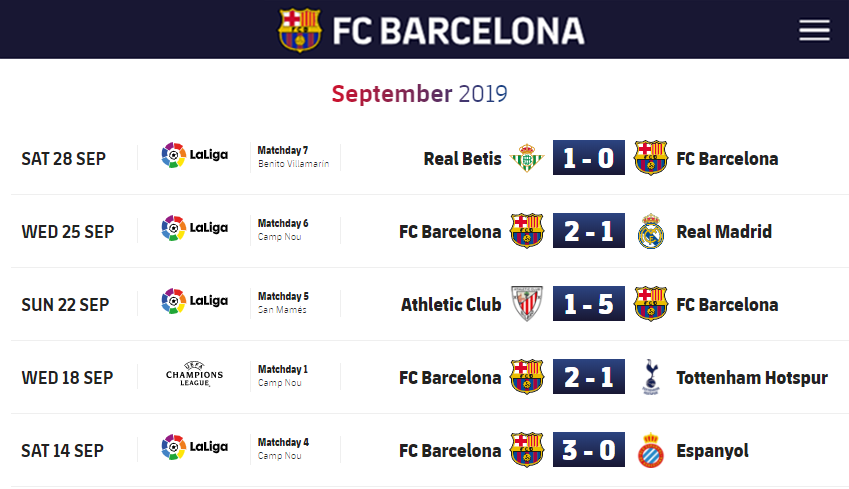 September was a very busy month for the team with five games stretched out on two weeks following an international break. Xavi said before the first match that he'd like to keep on with last month's performances and collect all the possible points with el clásico and derbi barceloní two of four league games. It was quite a positive month but dropping points in the last match screwed a perfect one.

The first game saw one-man-show by Luis Suárez, registering a brace, assist and a missed penalty to his name in one-sided match in the Catalan derby. The first half did not offer much with only notable events were Marc Roca taken off for an ankle injury and Espanyol's goal disallowed for an offside in the 39th minute after a VAR review. The second half was much more entertaining, starting with Suárez got free in the penalty area and netted the first goal following a pass from Antoine Griezmann. Suárez doubled 16 minutes later when he headed in a cross by Arthur. The Uruguayan assisted the next goal when a cross of hm found Ousmane Dembélé's head. It could've been a hattrick for him but he missed the goal with a penalty late in the game.

The next one displayed a better opponent in the form of Tottenham Hotspur when Camp Nou hosted another European night. Luis Suárez continued his goal-scoring form when he finished off a near-post cross by Lionel Messi (10). Tottenham reacted quickly with a 30 meter worldie by Giovanni Lo Celso a minute after (11). Barcelona could've secured the victory a lot earlier but got denied by Hugo Lloris time after time but it finally happened in the 92nd minute when Messi reached first to a pass destined to Vertonghen and ran all the way and overpowered the French keeper with a close-range effort into the left side of the net.

The team recorded another victory with a demolition of Athletic Bilbao. Samuel Umtiti charged on a rebound and fired it in from close-range in the 6th minute. Lionel Messi doubled with a wonderful free-kick 8 minutes later (14). Frenkie de Jong found Griezmann with an inch-perfect through ball and the attacker rifled a first-touch shot into the net of the Basques. Unfortunately, the new signing suffered a hit to his ankle a minute later and got subbed by Dembélé. Bilbao pulled one back in the 44th minute as the veteran Raúl García scored with a powerful strike from the edge of the penalty area. Then Sergi Roberto sent a cross into the box and Suárez beat his defender to it and scored with a header into the far post and it's 4-1 already (49). Messi scored his second and Barcelona's fifth in the 71st minute when he got first to a ball inside the box and tucked it in. After the whistle, it has been revealed Barcelona will have to cope without Antoine Griezmann for the next four weeks because of an injury, twisted ankle.

Then we had the biggest match in La Liga, hosting bitter rivals Real Madrid in Camp Nou. It turned out to be a pleasant day for the club and its supporters when a brace of Ousmane Dembélé's awarded a precious win. Both teams were frustrated after getting prevented by the woodwork but it was Real Madrid's fans celebrating first when Raphaël Varane latched on a rebound off the woodwork and tapped it in (25). Luis Suárez got the ball to his feet at the middle and ran down the left wing, laid it out to Dembele who beat Courtois with a placed shot (60). Two minutes later and the comeback turned official with Busquets found Ousmane Dembélé in the left wing, rushed into the box and blasted the ball into the net (62). The referee blew the whistle and gave the fans the sign to celebrate a victory over the much-hated opponent.

Perhaps the team suffered of overconfidence or it was just a poor performance but the next opponent, Real Betis, gave the club its first loss in this season. The Verdiblancos overcame the league leaders, thanks to a volley of 38-years-old, Joaquín (46).

FC Barcelona's manager, Xavi, commented: "Many will agree with me that it was a good month for us but there's a bitter taste left with the loss against Betis. I have to take the blame for it and promise the fans we will work harder to promise it will not happen again. Dropping points is fine and understandable but the fans need to see us fight in every game and it just wasn't that. At least we made them happy with El Clasico victory, very important for us and them. Overall, there's a lot of satisfaction but there are areas we need to work on for the next months to come."

The club's sporting director, Andrés Iniesta, added: "Xavi and the team performed well in the last two months since the season's beginning. Sure, there's place for improvements and I told Xavi that and he agreed but I'm optimistic. The club's going through a change and despite it might take time for some to adapt, it should not affect our battle for all the titles we can get."

ScottT
1 year
A loss against Betis isn't ideal but victory against Madrid will go a long way to aiding title aspirations.
Login to Quote

TheLFCFan
1 year
Great wins against both Madrid and Spurs. But to lose to Betis is a disappointment for sure.
Login to Quote

ML Scouter
1 year
The loss against Betis will quickly be forgotten after winning vs Madrid. (Feels even better considering how bad that fixture was irl)

Indeed, nothing better than beating your biggest rivals and contender for the title.

Did not see the loss coming but it'll get the players fired in the next games.

Oz96
1 year
I am sorry for not posting any updates for a while. Caught with work but I'll try to post a few more this week.
Login to Quote