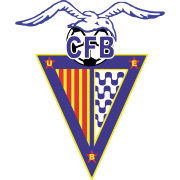 
The black saloon car cast a long, dim shadow across the pavement as it pulled up at the walkway to the Estadi di Montigalà in the evening sun. Despite the heat and humidity brought by August in the municipality of Badalona, in the north of Barcelona, the blacked-out windows were sealed tight to keep prying eyes and flashing lenses away from its contents. The car was surrounded on two sides by pedestrian barriers as onwatchers gathered to take a glimpse of the man in the car.

The gentle chitter chatter of the onwatching crowd broke into a whooping roar of adulation as the doors opened wide and the three incumbents of the vehicle slipped out onto the hot tarmac in a well-practiced, synchronised motion. The three men walked with two behind the main man of interest, who lead his entourage along the path towards the stadium that belonged to Club de Fútbol Badalona. The trio paid no heed to the crowd that had awaited them and took no notice of the cameras flashing around them as they marched on.

Despite the warm evening heat, the three were dressed in charcoal-grey suits with black overcoats and flat caps adoring their heads. They were slim and pale - clearly not from the Iberian peninsula - while their faces were battle-worn and well-weathered. The man at the back-right of the triangular formation donned a shaved haircut, at least on the back and sides, while his face clearly belonged to the youngest of the trio with no facial hair to be seen. The man to his left, by contrast, donned a bushy red moustache underneath a hooked nose set of scars. He was a warrior.

Despite the significant differences in appearances, the two were clearly brothers. They walked with the same presence and the same aura protruding from them, and the same glow in their eyes which would have made the devil shiver. This was a tightly-knit group, that much was for certain, and the way they walked behind the man in front expressed a level of respect which only came through family bonds - they were three brothers. Three bringers of destiny - but would the destiny be doom or glory?

The leading brother moved with a calmness and a coolness which matched his appearance. His pale, white skin was pulled tight over his gaunt facial features. High, protruding cheek bones were emphasised by shallow cheeks and wide cold-blue eyes which glowed ominously as they tracked his surroundings like a shark in open water. His mouth was pursed ever so slightly as he remained expressionless, not giving up any clues to the members of the media and of the public that stood no more than five metres either side of him.

The doors in front of the trio were opened by two security guards who had been awaiting their arrival and a welcoming party greeted them with applause as they entered the sparsely-decorated atrium. The party, well-dressed in their finest garments, took place behind the three brothers as they marched towards the press-conference room, which was well sign posted 'CONFERENCIA DE PRENSA'. A woman in her thirties with dark hair tightly tied back - the press officer - smiled as the brothers approached and held out her hand to greet them.

"Bienvenido," she said warmly to each brother before turning to the man in the middle. "The reporters are waiting for you through this door, Señor Shelby. Buena suerte!"

The man with the cold-blue eyes pushed open the door and was met with more flashing lights. To his left was a table set out with a stool and a placard signaling his position, with a freshly-poured glass of water adjacent to it. Opposite the table was a set of no more than twenty chairs all occupied by reporters ranging in age from their teenage years to their late-sixties and of all sorts of styles. There were no recognisable faces among those present from the media - it was only a big day for some.

The man walked over to the table and stood over his chair as he removed his overcoat and flat cap. Underneath his coat was an immaculately-clean suit which he fixed into position with one hand as he used the other to comb through dark hair that fell to one side. As he sat down, he surveyed those in front of him, looking for answers in the midst of the inevitable questions that were about to follow. His eyes darted from one reporter to another, pausing momentarily over a middle-aged man who sat at the back taking notes.

"On behalf of Club de Fútbol Badalona, I would like to thank you for waiting," said the press officer. "As you know, we have a strict schedule for this press conference as our new manager, Señor Shelby, has a busy agenda for today. We'll start by allowing Señora Marta Rodríguez of MARCA to ask her question first."

The press officer gestured to a grumpy-looking woman in a pinstriped suit sitting in the front row with a rigid posture and a facial expression that looked like she just witnessed her parents fornicating. She repositioned thin spectacles on her face while inspecting the man in the spotlight with a condescending glare.

"Señor Thomas Shelby, congratulations on becoming manager of Club de Fútbol Badalona. However, this is your first role in management. Do you really think you have what it takes to take part in our glorious footballing federation? After all - you are from England, and your experience in the game extends to nothing more than a few seasons playing for Birmingham, and it is also public knowledge that your focus is spread across more than just football."

Shelby breathed out and smiled in disbelief. Before he answered, he removed from his chest pocked a set of his own spectacles - thin, rectangular glasses made in the colour of silver. He wiped the lenses with his sleeve before placing them on his face delicately. He looked deep into the eyes of the unmoving reporter who questioned him before repositioning himself on his seat and putting words to his reaction.

"The biggest mistake this country can make is to underestimate me. I am aware that not everybody takes a fancy to Englishmen, particularly when it comes to football affairs. I'm also aware that my own footballing history isn't the most decorated and isn't steepled in trophies and accolades like many others in this city, but I am a legitimate football manager with plans, objectives, philosophies and the know-how to succeed.

You're not the first person to doubt me in my lifetime, particularly in my other lines of work. But you have to remember that, while football isn't the only passion in my life, it is something I do have great interest in and affection for and I've always succeeded in whatever I've invested my time and focus into. While I'm not yet a renowned manager, I certainly will be in a year's time, and my legacy in the game will be immortalised in five year's time. I will win a lot of trophies and all the sceptics here around me now will never have an inkling of doubt in me ever again.

Tango
7 months
someone that speaks this much about himself is obligated to deliver, we'll see
Login to Quote

ScottT
7 months
Blessed with a Justice story. What a beautiful, beautiful surprise. <3
Login to Quote

Jack
6 months
I'm really going to read every update in that annoying Brummie accent aren't I?
Login to Quote

TheLFCFan
6 months
A Tommy Shelby, I wonder what these other lines of work could be...Good luck!
Login to Quote