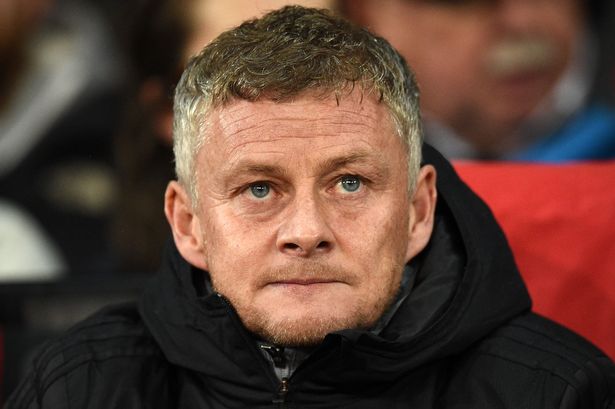 Now is this a big question, who is gonna replace Ole Solskjaer?
The whole nation is about to suffer from Brexit with now rules for the Premier League, making it harder to buy foreign players out of the United Kingdom. Many sources are saying the club is in talks with former Tottenham manager, Mauricio Pochettino.
Login to Quote 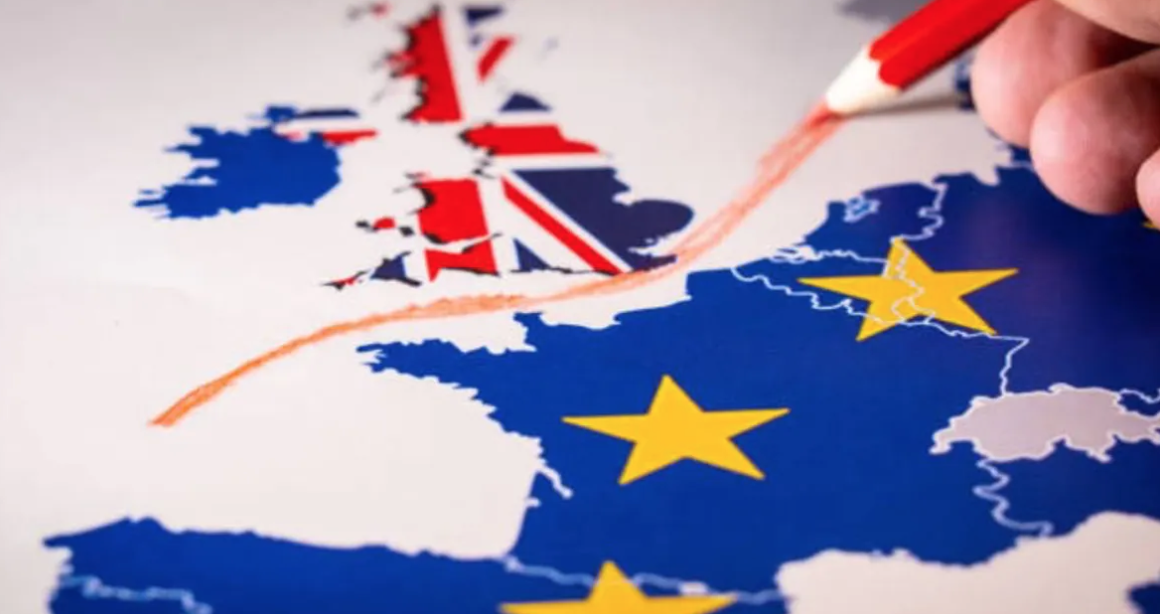 Welcome to my first blog in FM21!
I will try to win everything with my beloved Manchester United, but!
There are some certain rules, so I don't just win everything in the second season. I have made some rules about Brexit, I'll maybe add more rules on the way. It's just nice to have some rules from the start, I'm thinking of going 100% British after the 3 seasons. After the first season, I will take a look at my rules and see if the game is too easy or too hard!

Because it's very hard to sell and buy players at the start of the game, we will see how tough the challenge is right from the start!

• You have 3 seasons to get used to new rules

1. There can only be 3 NON-Brexit players on the field at the same time (after the first season this will go down to 2)

2. There can only be 5 NON-Brexit players in the squad (After the first season this will go down to 3)

3. You can choose to only have Brexit players in the squad

• Choose any team in England or another of the 4 nations

• You can add more rules underway, to make the save even harder

• You play with the latest patch

• Challenges are for the real gentleman, so no use of the editor, in-game editor, scouting program, downloaded tactics, and so on.
Login to Quote

FmGade
1 month
Mauricio Pochettino could not get his work permit in order since he has been home in Argentina after getting sacked at Spurs. That means Manchester United had to look elsewhere and instead inside the United Kingdom. So for the being, Michael Carrick will take over as caretaker at the moment.

Edward Woodward – Executive Vice Chairman and Director
"Because of the new rules regarding Brexit, we can't just hire any manager we want from another country. Lucky for us, we have Michael at the club. He has spent some years learning as a coach at the club now and has done his Pro-License. And of course, he knows our club, playing over 300 games in his 12 years as a player, I'm sure Michael has what it takes to be in charge for some games, while the board and I are finding a new manager. "

Michael Carrick - Caretaker at Manchester United
"It's a big honour for me. I'm very happy to get the chance from the club and I'm sure if a do my best, we can get United back on top in the Premier League. It's a new time in English football after Brexit, but I'm sure we as a club will get even stronger after it. Manchester United have always been famous for producing young players and develop young talents from all over the United Kingdom. It's in Manchester United's DNA. "
Login to Quote

FmGade
1 month • Edited
With Michael Carrick at the wheel and Woodward doing other stuff in the club, Manchester United has been searching for a Director of Football for a long time.
Finally, they found one. His name is Kelvin Coton. 39 years old and from London, Coton has never been in the Football world. Coton is a well-known businessman, where he first started his own company at the age of 19, sold it 5 years later for 2,5 billion. Later he got to be CEO of the bank Barclay, where he is the youngest CEO in Barclay's history. Now he has diced to step down from the business market and try the football world. He has a Pro License, where he of course wrote about how important the Director of Football is in the modern world. 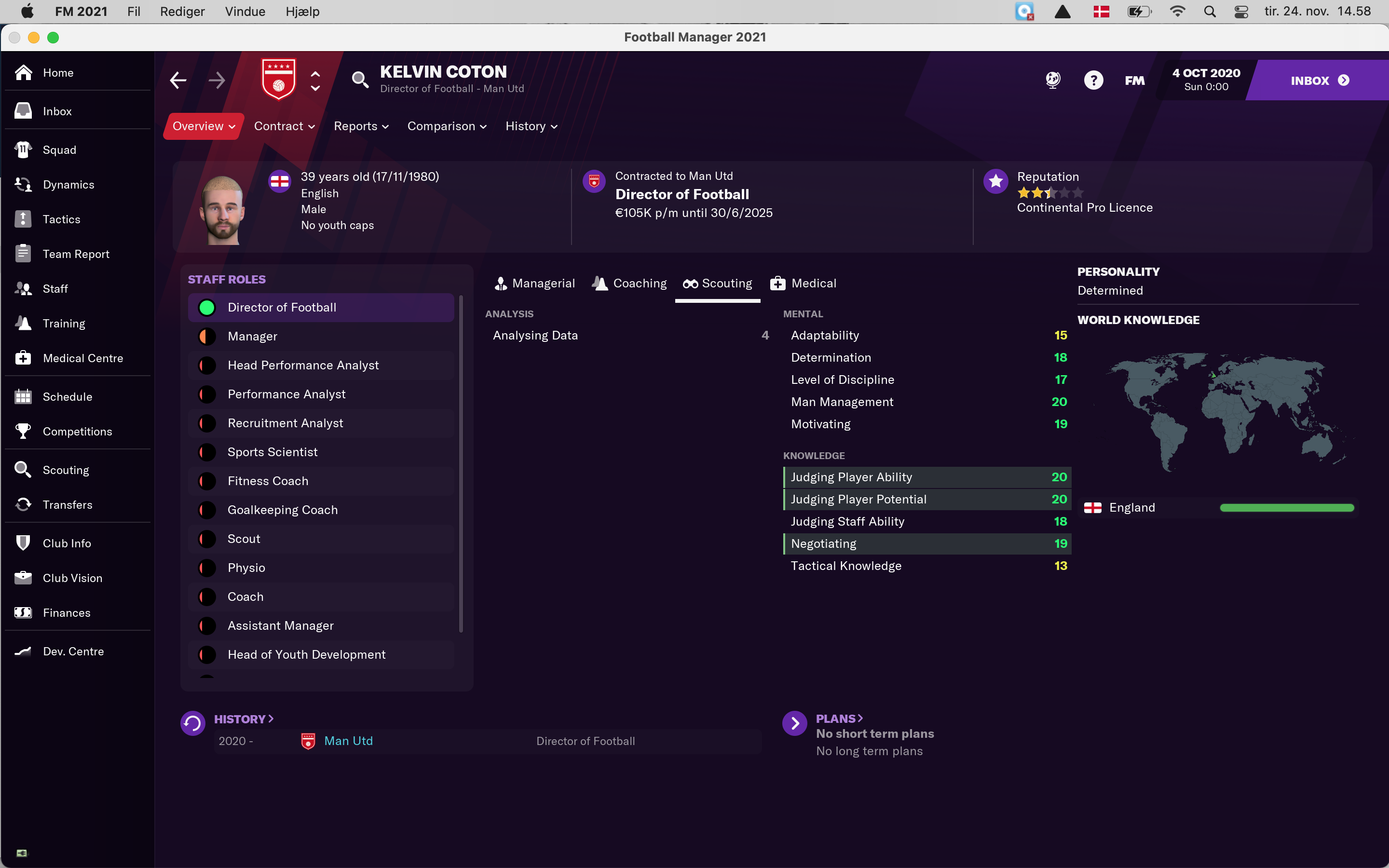 "I'm very much looking forward to starting in my new job and show the fans of Manchester United, what I can do. There is no doubt in my mind, that I can help the club in these hard Brexit times, especially about the finance where the club has been struggling for some years now. "

"We have to upgrade our youth team and get the biggest talent from around the United Kingdom in much earlier, because of Brexit. King and Chuk will play with the u19 team, while Porteous, White, and Brooks are going straight on to the team. Aarons is gonna spend the season at Norwich, helping them bounce back to the Premier League, while Collins is going back to Stoke to help them for a season. "

"We are busy trying to get rid of our international players, but the times are hard. Not many clubs have money to spend at the moment, so maybe we have to wait until the next season to do the big changes in the squad. "

Loan OUT —>
Victor Lindelöf —> FC Barcelona
Max Aarons —> Norwich
Teden Mengi —>MK Dons
Nathan Collins —> Stoke
Ethan Laird —> West Brom
Ethan Galbraith —> Tranmere
“Victor now has a great chance at Barcelona to show them, what he is about and then we hope to sell him next season. Mengi, Laird & Galbraith needed to play the first team, and they're no place for them at this moment. We hope they get back a lot stronger next season.”
Login to Quote

ScottT
1 month
Carrick will be a popular appointment once the fans get over the fact Poch is simply not a viable option.
Login to Quote

Premier League:
Wolves 1-1 Manchester United
Wan Bissaka sent off 1'
Rashford 24'
Line up: D. Henderson - A. Wan-Bissaka - H. Maguire - B. White - A. Telles - S. Mctominay - P. Pogba - B. Fernandes - M. Greenwood - M. Rashford - A. Martial
First game in the season away from home, very important not to lose the first game for Carrick. You have to remember that it's not easy to play away against Wolves, a real strong team!

Sheffield United 0-5 Manchester United
Martial 26' 81' Greenwood 34' Rashford 54' Maguire 78'
Line up: D. Henderson - B. Williams - H. Maguire - B. White - A. Telles - S. Mctominay - P. Pogba - B. Fernandes - M. Greenwood - M. Rashford - A. Martial
From one big win to another big win. Martial got his scoring for the season started. Greenwood & Rashford also got a goal, so the front-trio played well with a Maguire goal on corner to finish off.


I hope so!
If he can deliver on the field, I think everyone will be pleased!
Login to Quote

ScottT
1 month
A good start and nice to see some of the young lads being given a chance from the very beginning.
Login to Quote

Eoin97
1 month
A mighty challenge indeed! As a man utd fan myself it's kinda refreshing seeing someone else at the helm other than Solksjaer atm


As some of them may know because you maybe have played this year's FM21. It's hard to get rid of players, so I have to change my ambition for getting rid of foreign players in the first season.
I will try again I January to sell some of them, but the first season is going to be a "free pass" to Brexit.
From the start of the second season, I will only allow 3 not-Brexit players and by the start of the 3, it should be down to only 1 player.
Pogba/Fernandes/Martial are the 3 players I'm thinking of keeping. Greater role models and leaders!
Ofc Pogba and Fernandes are also world-class, but to make the challenge harder i need to sell them at some time...

Haha yes! I was thinking about who I should "play" and got to the point where I think Carrick was a fine choice to rebuild the club on youth and not just bring in some big manager there is not going to see the young players way!
Login to Quote

FmGade
1 month
Ocotobor 2020
Another month gone by and still unbeaten should be the title of this update!
2 tough away games against Spurs and Chelsea, where we got 1 point in both games is fine with me. It's not just in real life, that Cavani can save points because it did for me against Chelsea in the last minute and against Zenit in the Champions League. Fernandes "finally" got his hattrick this month after missing a penalty last update, he scored on the penalty this update. I might have to look at my tactic for away games, but for now, 1 point against all the other top 6 teams will make me happy so far, as long as we can keep our streak where we don't lose, anything can happen.

ScottT
1 month
You can certainly expect goals with Carrick's United!
Login to Quote

TheLFCFan
1 month
Good start to an interesting challenge. Leon King looks great this year and is developing nicely in my Rangers team, I hope you can develop him well and he gets some gametime in a few years time. As for the results, seems to be going well, especially that thumping of Southampton!
Login to Quote

FmGade
1 month
November 2020
Long time no see you might think!
But what a month November was, first playing against Liverpool, where both Scott & Bruno lost their heads!
How I got 1 point from that game, I'll never understand. Then an easy win at home against Brighton before playing another rival, Manchester City away. David James got in the pitch in 85' and then scores on his first touch to help us stay undefeated so far.
Cavani keeps smashing the Champions League, hate that I have to let him go by the end of the season!