"Jack, can you explain your poor form in the league so far?"

Jack grimaced. "I wish we could have gotten off to a better start, of course, but we must remember the position that the club is in right now. We were predicted to finish dead last. While it's not great to only accrue a single point from the first three matches, we were competitive in all 3. Even losing 4-1 to our rivals Portimonense, we actually accrued more expected goals than they did, 1.5 to their 1.0. "

"How about we have some expected wins then!" someone shouted.

Jack winced. He had learned quickly that Farense had some... passionate fans. Time to change the mood in the room.

"Well, I think it's time that I make an announcement. As you know I have had relative freedom deciding my coaching staff, and I've made three selections. I claimed 18 caps for the United States, and have decided that these three must have... a bit more than me. Without further ado, two men who will be coaching the first team. One of these men is actually the caps leader for his country, and between them, they have 213 caps between them."

"Ronaldo!" one journalist yelled, and a wave of chuckles swept the room, even catching Jack who had taken a sip of water, and summarily choked on it. He wiped his face.

"Unfortunately, Mr. Ronaldo did not wish to join the best team in the world that plays in black and white. But, everyone, these two friends came as a package deal and I was more than happy to hire them. May I introduce, Claudio Pizarro and Roberto Palacios!" 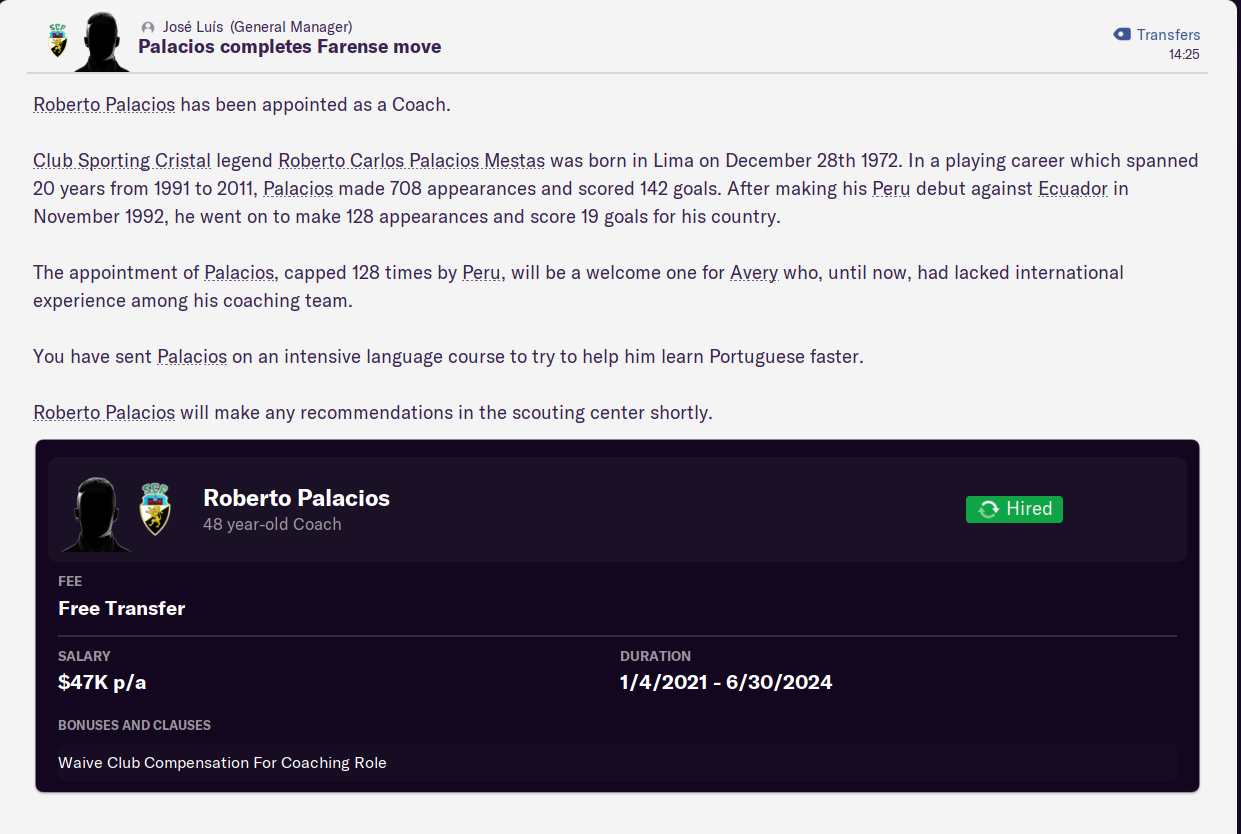 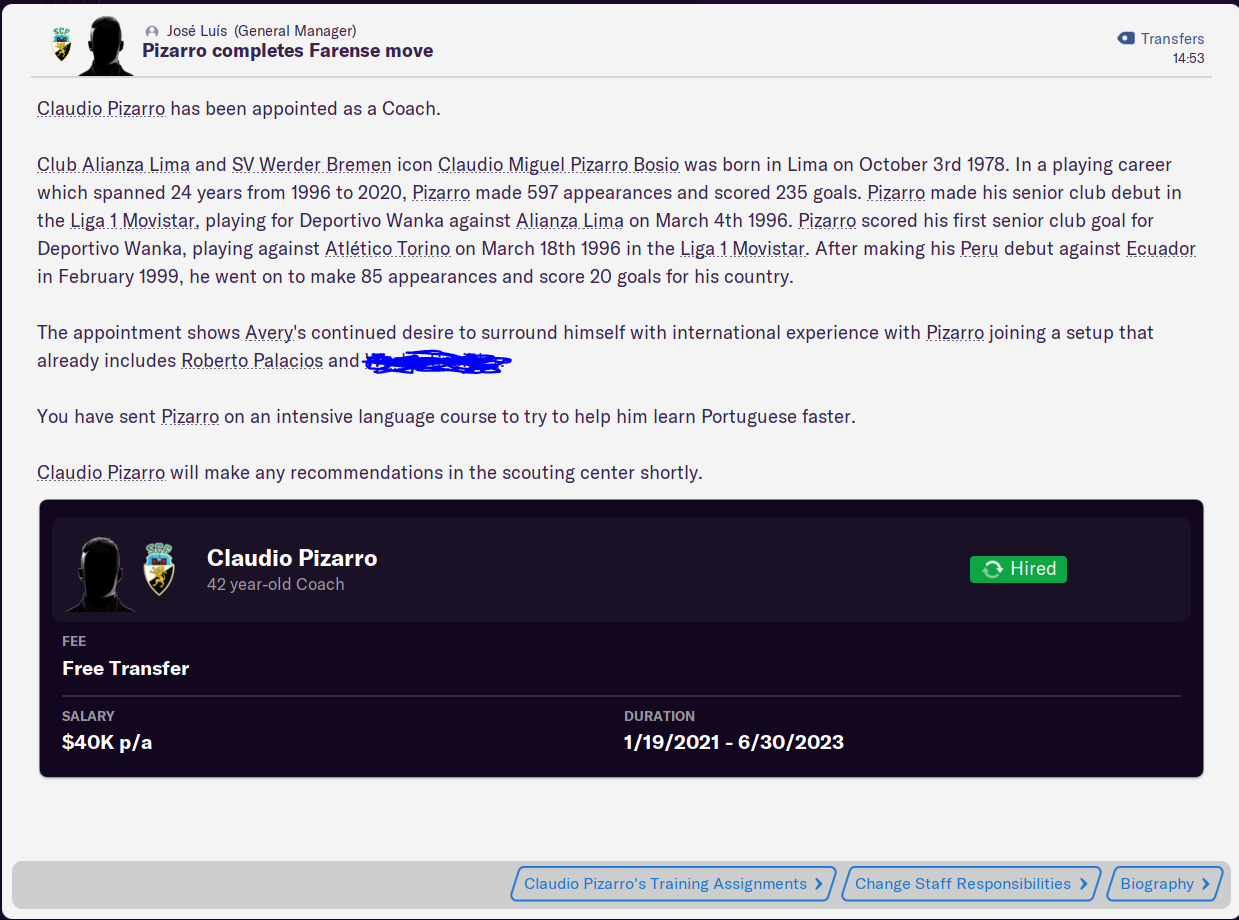 The two Peruvian legends walked out to surprised and pleased applause from the assembled members of the press.

"Before we get to the main event, I'd like to announce that midfielder Ryan Gauld has signed and will play the next three and a half years for Farense. Now, for my assistant manager..."

"Hans? Hans de Koning? How the hell are you?" Jack asked over the phone. The VVV-Venlo manager had been his manager during his year on loan at Go Ahead Eagles, a year that had seen them promoted with Jack playing a crucial role in net. The two men had been good friends.

"Jack! Good to hear from you! Welcome to the world of management, my friend!" Hans laughed.

"Thanks my man! VVV-Venlo getting on okay?" Jack replied.

"Good enough for government work. Look, there's a reason I called. We played Utrecht yesterday, and I ran into an old friend. He's been working with their youth but wants to make a step up. I know you don't have an assistant yet and I thought it would be worth giving you a call. What do you say?"

"Who did you have in mind?"

"That being said, the new assistant coach of Farense, Wesley Sneijder!" 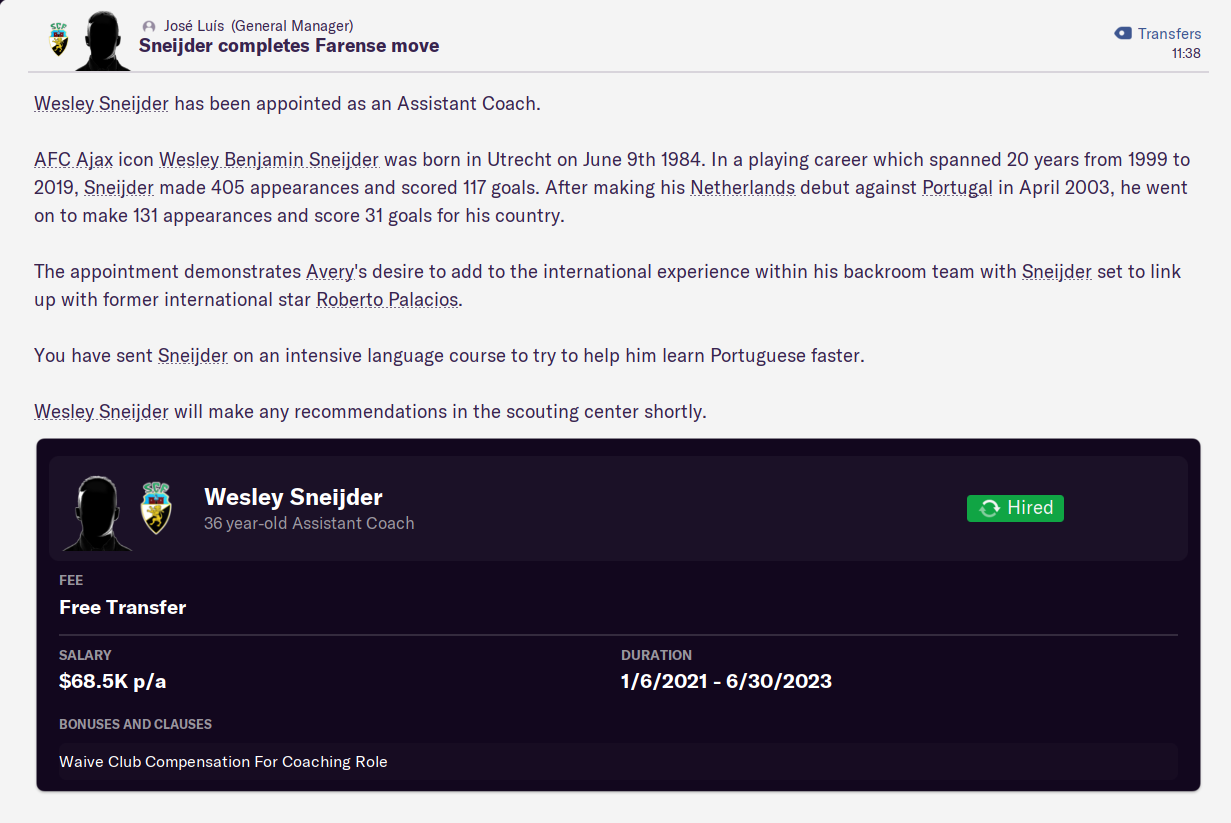 ScottT: Simple, yes. Easy? Not so much.

Tango: Jack may have to change his name if things keep going like this.

Justice: Thank you! Glad to have you on board!
Login to Quote

J_ames
2 months
There's already some small cracks appearing, with the Farense fans definitely not a patient lot. Some big names have been hired, but it's up to Avery to use the contacts that he has to bring in a few players that will turn this team around and propel them up the table. Whether that's actually possible: it remains to be seen...
Login to Quote

Jack
2 months
Just catching up on this one and I see that someone called Jack is being called a bald fraud! I almost felt offended

If someone’s gonna teach these players how to finish, it’s the coaches you’ve brought in!
Login to Quote

TheLFCFan
2 months
Avery is well and truly building quite the backroom staff here. Now to turn it on with the results and get Farense firing and climbing up the league table!
Login to Quote

TheLFCFan
2 months
Avery is well and truly building quite the backroom staff here. Now to turn it on with the results and get Farense firing and climbing up the league table!
Login to Quote

Jack stood on the touchline, watching his starting 11 warm up. 1 point from his first 4 matches was a shame, and he'd had several sleepless nights this week pouring over tactics with Nick Gallows, his best friend. Nick had moved out to Faro with Jack, and though he wasn't part of the coaching staff, the club understood that they were a package deal. They shared an apartment, which was currently overflowing with empty coffee cups and tactics-laden grid paper.

Nick strolled up to Jack. "Team sheet's in. Have you told the press yet?"

"Nah. But they know that something's gotta change. We've got 1 draw and 7 losses in the last 8 league games. Tondela are rock bottom. If we don't get a result here at home..."

From the crowd, Jack picked out the words.

The two Americans stood side by side, listening to the Farense fans serenading him.

Nick spoke after a long moment. "You know, it's kind of impressive they took the effort to learn the song in English."

In the locker room

"Boys. We've been absolute shit lately. I know it, you know it, and they" Jack gestured above them, where the fans could be heard. "They know it too. We do it for them. We've been practicing all week. No more fancy shit. Old school. It's gonna work, damn it. Four. Four. Two. Get out there and make me proud."

The players shuffled in nervously. The fans had not exactly given them the warmest of receptions on their way off the pitch, and the look on Avery's face left much to be desired. They filed in and sat on the benches, stretching, and drinking water. Their manager held a quick huddle with his assistant manager and Nick in the hallway before entering the locker room. Avery sat at his customary chair in the front of the room, facing the players, not saying anything. He took a sip from his water bottle, then stood up.

"Four. Four. Fucking. Two. The oldest active formation in the world. It's strong defensively and offers attack options. Sikou, Djame, you two have been great. The rest of you... I will not accept this gutless, spineless, dickless performance! Do you even WANT to win?"

Silence hung heavy in the room.

"Y-yeah coach." Fabio Nunes said after a second. The left-back looked up at Avery expectantly.

"THEN FUCKING PLAY LIKE IT" Avery roared, rising and spiking his plastic water bottle. It, empty, ricocheted across the room. "Four. Four. Two. Wes." He stomped out of the room.

"Right." Sneijder said after a pregnant pause. "Wingers, we want you pushing up farther, CMs, you can play a bit wider..."

Back on the field.

"Oh, a determined-looking Nunes will take the corner... Right on the head of Nikola Stojiljkovic! GOAL Farense!"

"And a second added by Djalma deep into stoppage time! Securing Avery's first win as a manager and on February 1st, Farense' first win since November. Finally a spark for the Faro men. But beating the basement dwellers since Week 11 is no major feat. Avery's got a long road ahead. But none of that matters now, watching him embrace Wes Sneijder on the touchline! It's a happy day in Faro tonight." 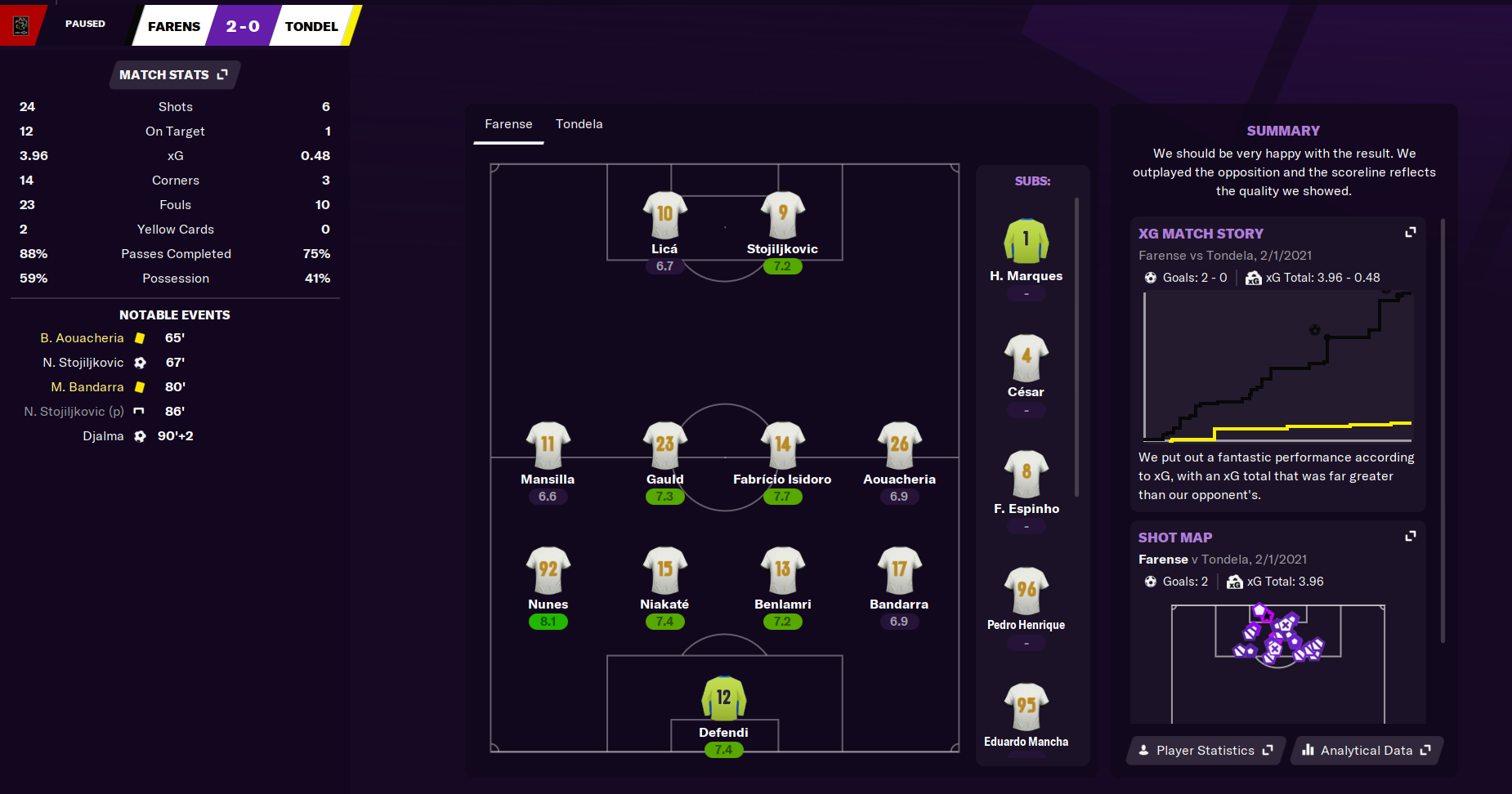 "Alright, so last week, good solid 2-0 win against Tondela. I expect more free-flowing attack this week. Mansilla, keep bombing up there. Boavista are seventh. We're attacking them right from the start. Got it boys?"

Ryan Gauld, the former "Scottish Messi" spoke up. "Boss, they're a really good side."

"And so are we, Ryan. I told you when I came in I believe in this side. Now I've got a new move that I want to implement. Wes, lead the boys out, and show them how it's done!"

The team, including the assistant manager, proceeded to the door, only to be confronted by a torrential downpour. While Faro is a beautiful seaside town, it does occasionally get its fair share of weather, too.

Avery jogged up behind the team. "What, are we gonna let a little weather stop us? This is a once in a lifetime rain boys, lets go enjoy it!

Laughing and enjoying themselves, the team was nearly unrecognizable from the gloomy mess that they had been just a couple months before. As they, sodden but happy, played with their assistant manager under the watchful eye of the 25-year-old American, he smiled to himself, watching his Serbian striker rifle another ball home. "Boavista don't know what's about to hit them." 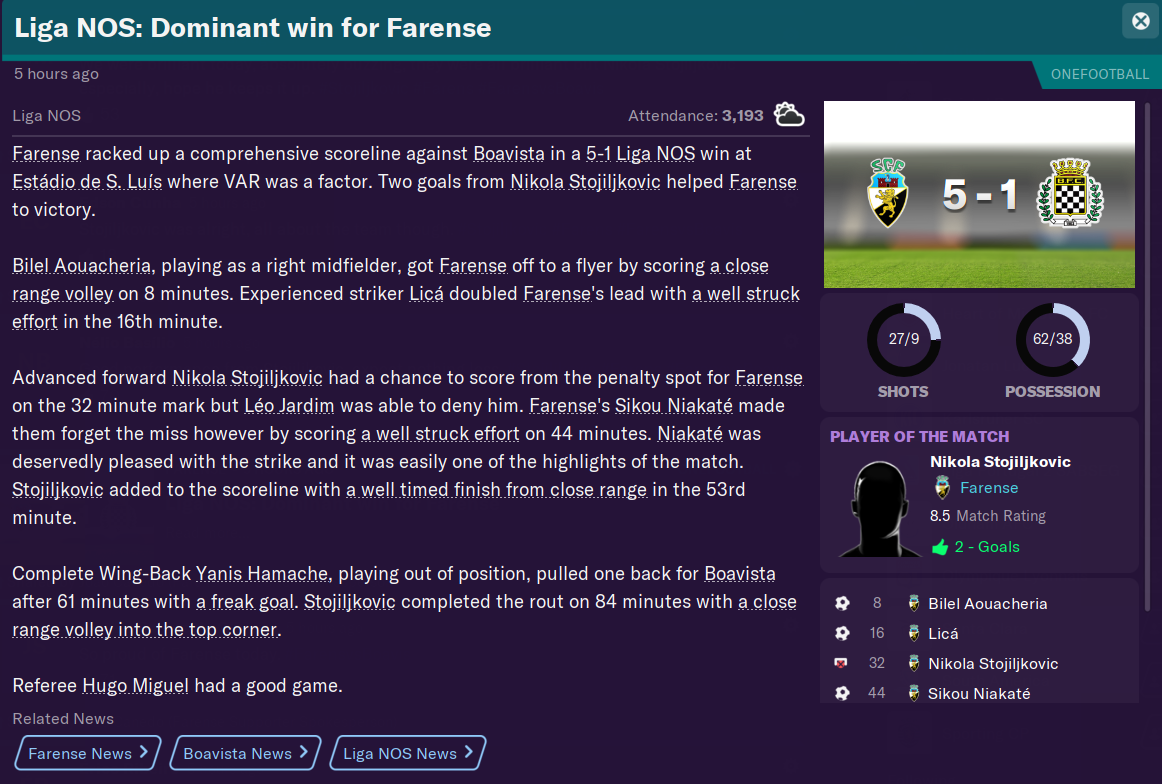 Farense played 5 total matches in February, having been knocked out of the cup in the 4th round under Sergio Vieira.

Farense kicked off the month with a routine but very welcome 2-0 win against 18th place Tondela. This was followed by a surprise statement 5-1 victory against Boavista. A bare 1-0 win against Maritimo was sandwiched by brave 2-0 losses to top clubs, as Braga scored in late stoppage to ice the game, and league leaders Benfica benefit from a fluke own-goal, as Avery's men did concede again late while chasing an equalizer. Though improved form from the teams around them means they finish the month still in 16th position, but with 9 points from a possible 15, there is much cause for optimism around Faro.

J_ames
2 months
A great turnaround from Jack and his squad, and hopefully that'll put the highly original chants from the fans to bed for a while. There's no doubting that they care about the club, but when they target the manager or squad as quickly as they have... that can do more harm than good.
Login to Quote

ScottT
2 months
That is more like it! Every set of three points is massively important. Let's hope they keep coming.
Login to Quote

Jack
2 months
A great way to bring the fans back on board with the plan, and a great way of instigating the change with the water bottle antics

TheLFCFan
2 months
Wow, a great month and an excellent turnaround from what was looking a bleak time. That win over Boavista was massive and will no doubt do the squad a massive boost in confidence. The two losses are nothing to be ashamed of either. Good job.
Login to Quote

You are reading "Firebrand: The Jack Avery Story".