Jack
3 months
A perfect way to end the season in a title-winning year. Great to see Hussein getting an assist on the board in his debut - no doubt a great confidence booster! Interesting to see Igor committing to another year in Fiji, especially given his little trip to Sydney to check out the facilities there. That trip certainly now does seem to be a research mission!
Login to Quote

TheLFCFan
3 months
Well, lets start with Monte Carlo. Another dominant season there and Igor and his squad really proved they were the best in the country for a reason. A shame that the new boss has come in and seemingly ripped it all apart and not trusted the squad you had built for the long term. But as you say, not your problem now.

Very interesting to see Igor move to Fiji having previously turned down a role there. But having got the experience at Monte Carlo, it's clear that Igor thought the time was right. He's been proven right, quite clearly, with a brilliant season in year one.

Waqa was a player I had last year in my save at Ba so I am very happy to see him performing so well for you this season.

If Igor's standards are anywhere near Blagoja's, which it seems they are, I imagine a few additions to the defensive side with him seemingly not impressed with his goalkeeper towards the end of the season. The Champions league will be very interesting to see and I look forward to Igor leading his side to further glory.
Login to Quote 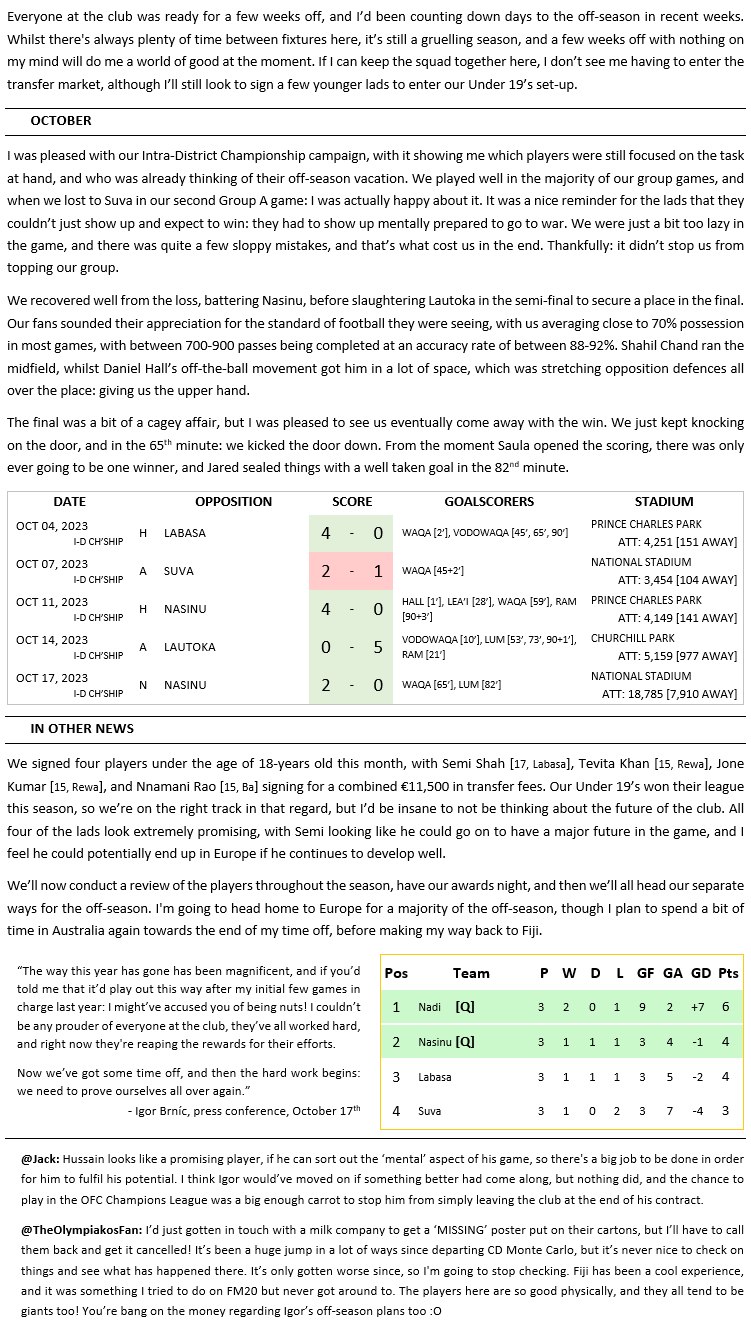 Jack
3 months
Aside from that Suva result, an assured performance in the Intra District Championship thus far. Nice to see Igor bolstering the youth teams as well! I wonder if Nadi is a long-term plan now

Jack
3 months
A great season for you with everything in every competition. Beating a NZ side might be a bridge too far simply down to how much more developed their system is compared to Fiji's so it will be interesting to see if Igor adapts or makes a move in future in the hope of fulfilling that continental desire.
Login to Quote

TheLFCFan
3 months
I think most of that review met my expectations in reality. However, I am surprised by the fact you are looking to give some of Chand away after what looked like an incredible season from him. Congratulations on the cup win too. Interesting that Igor is off to Australia again, after his comments about the Perth job earlier on I wonder if the goal is to end up there one day.
Login to Quote 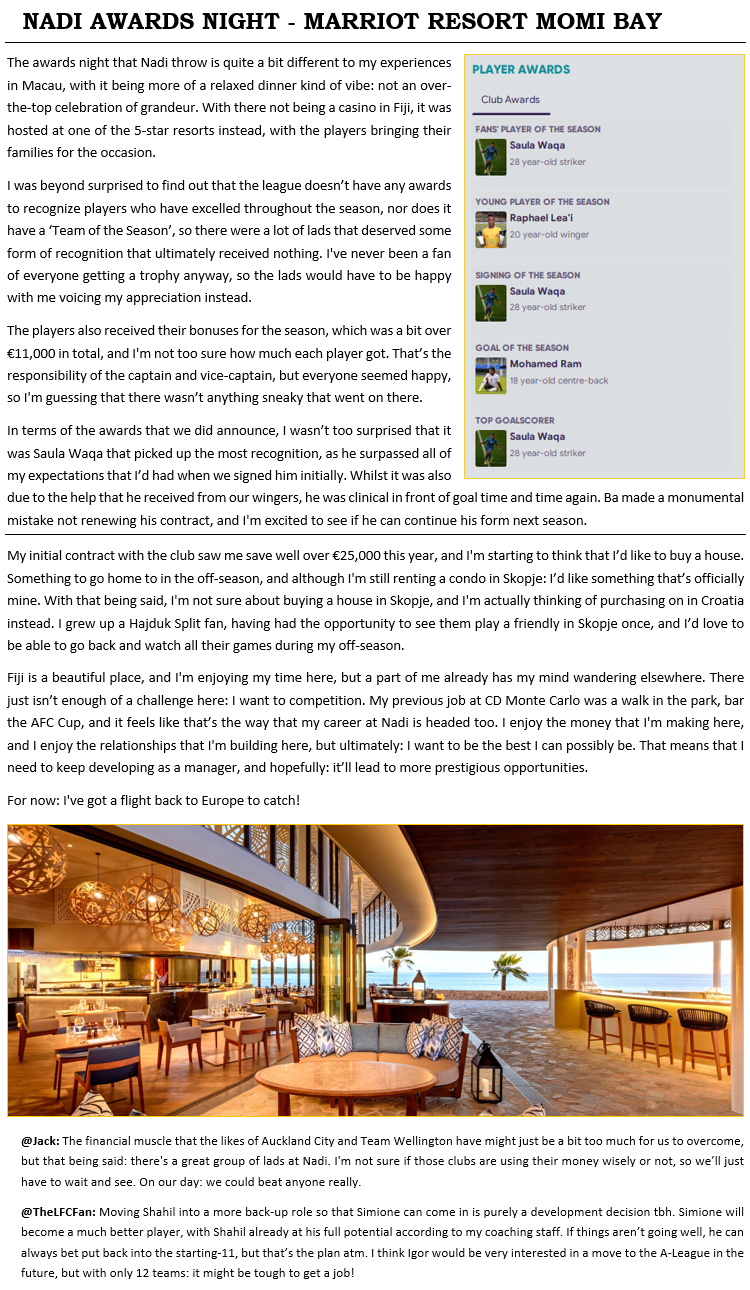 Jack
3 months
Waqa taking home all the awards, called it as soon as he came in so I'm glad he's repaid my faith

I understand Igor's mentality on the challenge not being there as much after this season. I do think to become a top manager, it becomes a lot harder when you spend your career in Fiji/Macau so I think it's time to move on and progress as a coach.
Login to Quote

Mauve
3 months
Always nice to see your save, one of the few who got a save in Asia. Good luck in Fiji!
Login to Quote 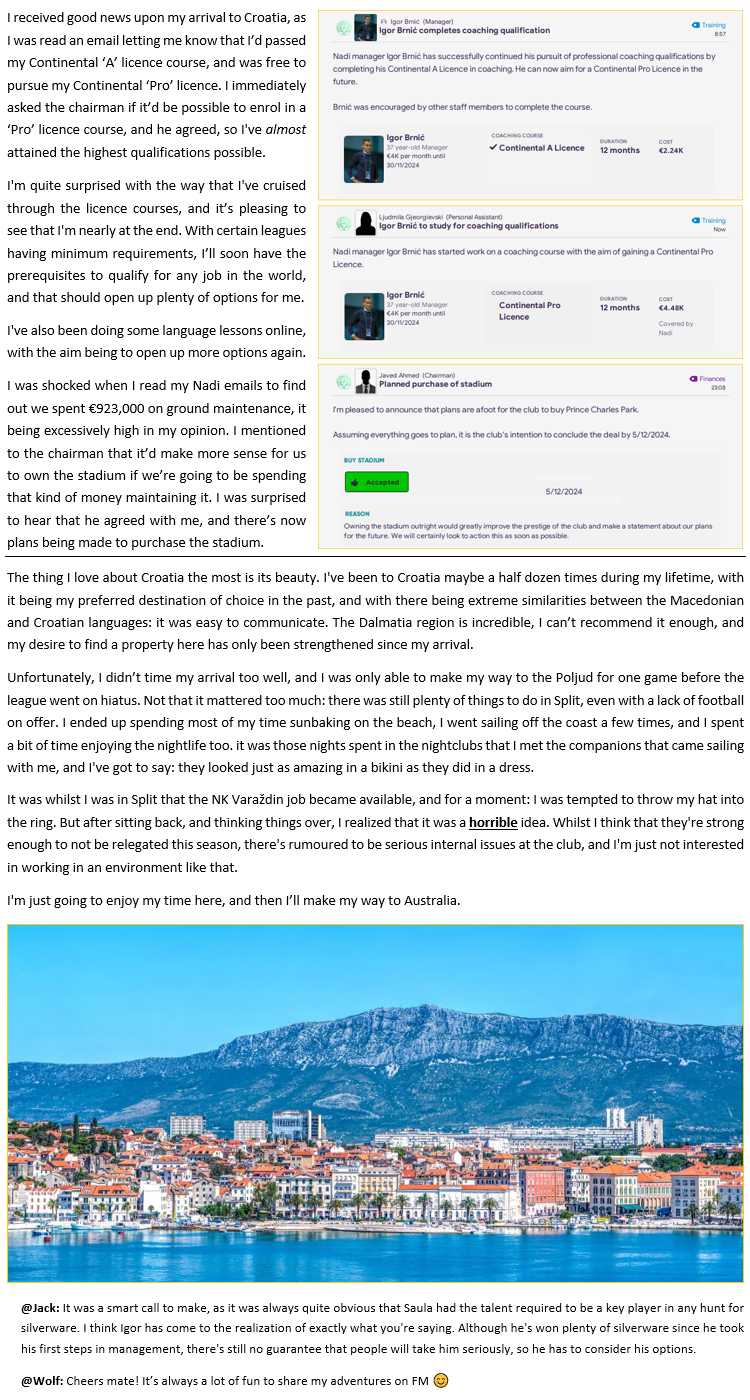 TheLFCFan
3 months
Good to see Waqa walking the awards night and he has ended up being an excellent signing with his scoring ability. Igor wanting another move doesn't surprise me in the slightest having walked the league in Fiji just like he did with Monte Carlo. I wonder if the trip to Australia will find that job there...
Login to Quote

With a few days left in Croatia, I wonder if he'll get stopped at the airport by chance by a man wearing a Varazdin suit jacket? I wouldn't advise joining a team whose short name is VAR, though

ScottT
3 months
Nice to return and see the level of success I am becoming accustomed to with Igor during the early stages of his career! There's plenty of promise and the more success that comes in these smaller leagues in Macau and Fiji, the more chance of somebody taking a chance on him in a 'better' division.
Login to Quote 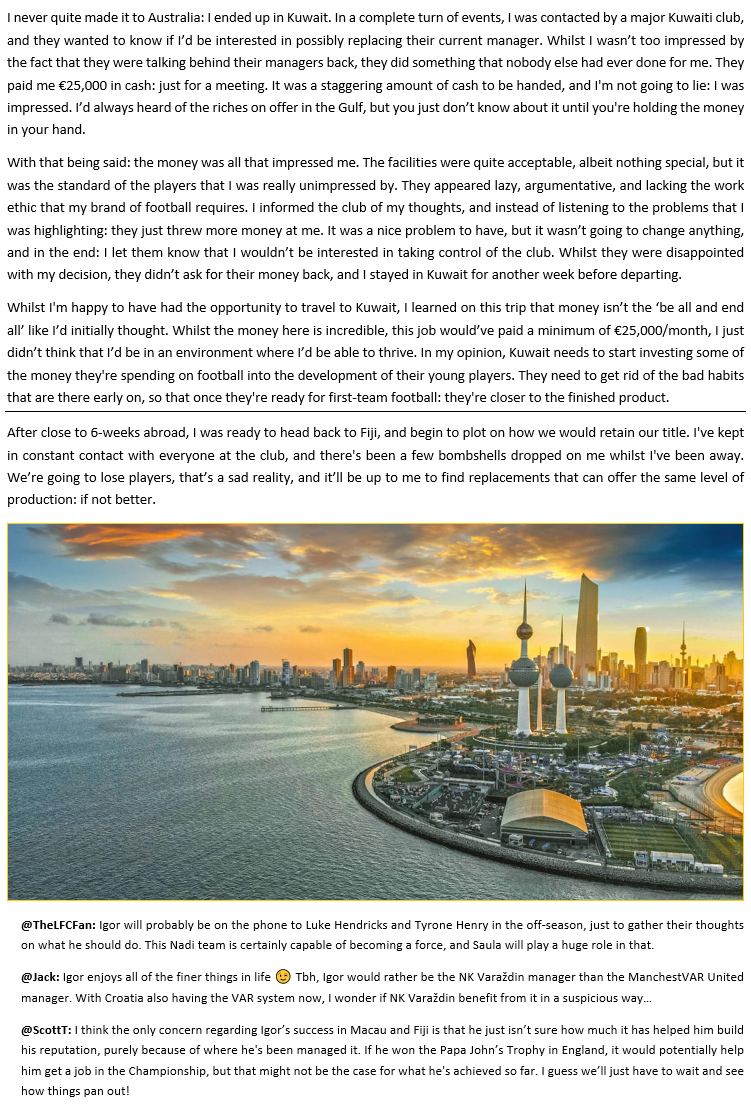