FEBRUARY & MARCH ROUND-UP
Just like the fans: I was excited for the season to get underway. We could play all the friendlies in the world, but nothing quite gets the adrenaline pumping like a battle for 3-points. In the fortnight leading up to the game, there was an air of excitement all about Mombasa, and the general comments around the city were straight to the point: it’s time for us to win. After being starved of success for so long, and a second-half to last season that was somewhat depressing for them: I understand their point.

In the lead-up to the start of the season, all the clubs released their financial statements, regarding their ‘net transfer spend’ and their ‘salary per annum’ figures. I was pleased to see that we’d made close to a €250,000 profit on our sales compared to our purchases, but I was surprised to see our wage bill is the third highest in the league at €503,000/year. I've no doubt that’ll change mid-season during the transfer window, once other clubs have seen where they're strong or weak, and subsequently go out and spend vast sums of money. Is it money they have, or will they run up serious debts? Your guess is as good as mine in that regard... 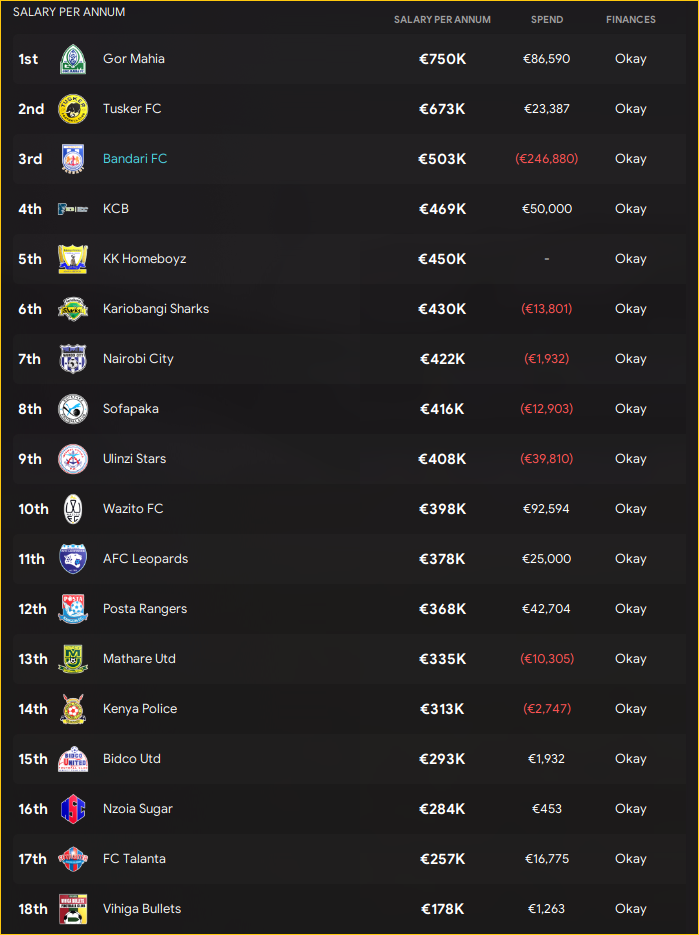 I’ll admit it: the opening game of the season had me worried. Immediately, I thought of abandoning our tactic, but I've elected to remain calm… for now.

We were much more convincing in the games that followed, although the opening 3-games in March were much closer affairs. With that being said, we’ve shown plenty of grit so far this season, and that’s something that’s already pleasing the fans on the terraces. There's plenty of belief in the lads from them, because they’ve shown a willingness to graft, and a ‘never say die attitude’ in all of our games, which is exactly what they expect to see.

To start the season with 8 wins from 8 is a fantastic feeling, and although it’s early days: some fans are already daring to dream. I can’t manage their expectations, but I can keep the squad grounded, and that’s what I'm doing: for now.

Which means the league table currently looks like this: 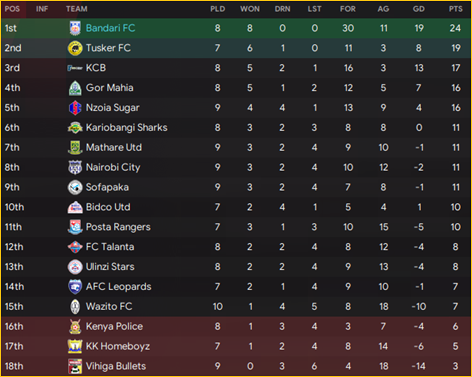 We drew lower league fodder in our first cup game, and I decided that it was the perfect opportunity to rotate a lot of my squad. Obviously, there'd be players that would remain in the starting-11, but there’ll come a point where I’ll need to give them a few days off in order to avoid fatigue.

I’d promised the lads 3-days off if they secured a convincing result against Administration Police FC, and they delivered one of the most convincing performances that I’d seen since entering management. It’s important to not get carried away though: we were playing a bunch of amateurs! That being said, I was completely blown away by Nikola Milošević, and the way he's settled here so quickly is extremely impressive.

FORM PLAYER → NIKOLA MILOŠEVIĆ
Nikola has hit the ground running in Kenya, with him becoming the focal point of our attack. He's just so composed on the ball, and he seems to play the right pass all the time, before making his way into the penalty area. The only ‘blip’ that he's had this season has been a missed penalty on the opening day of the season against Wazito FC, but apart from that: he's been an absolute monster in front of goal.

It’s fair to say that Nikola has already become an indispensable player, and if he keeps up his current form: it’s natural that bigger clubs will become interested. As long as we get a fair price for him: there's not much we can do. 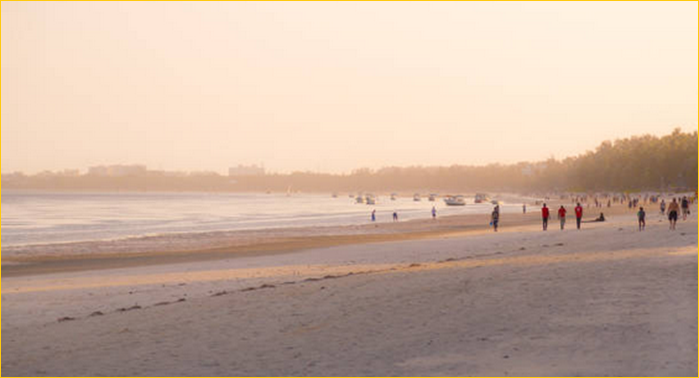 @Tango: It was quite a long pre-season, but there was a lot of work to be done! Thankfully, a lot of the graft has been done now, and we can get by with 'tweaks' instead of 'wholesale changes' over the course of the season.
Login to Quote

NTBgaming
5 months
Milosevic seems like a monster, scoring goals for fun! Ideally you'd like to keep him but with him being serbian the bigger (European) clubs will probably start circling around him..
Also is it me or does your squad not seem to have that many CBs? I might have just missed some, but you are playing with 3 right?
Login to Quote

You are reading "Drago Barišić - Taking over the World".