golfguy8403
11 years
I ended up playing AFC Bournemouth (a League 1 outfit) in the English League Cup final. Granted, their road to get there went though Hereford, Wigan, Chesterfield, Shrewsbury, Sunderland, and Sheffield Utd. But still, pretty crazy for a team from League 1 to get to the final. Anyone else every played against a horrible team in their respective domestic cup final? 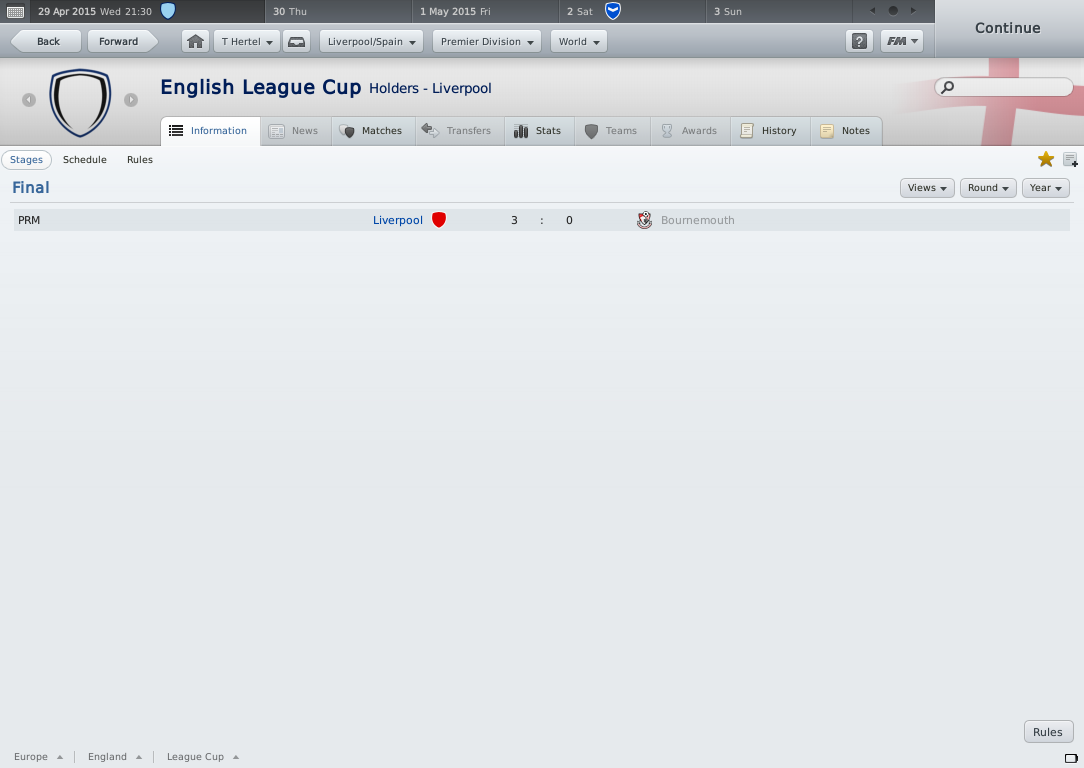 Meister
11 years
I saw Eintracht Braunschweig reach the DFB-Pokal semifinals, but haven't seen anything else like that.
Login to Quote

paul1576
11 years
never got to one in fm but they must have done bloody well to get there!
Login to Quote

macdab55
11 years
I think once I played in Polish league and some team from 4th league got promoted into final.
Login to Quote

) they got torn apart by Chelsea in the Final but I believe they took 2/3 Premiership scalps along the way!
Login to Quote

macdab55
11 years
I think sometimes its just amazing that a team from lower leagues is beating teams from the highest league.
Login to Quote

Lucas3
11 years
I have the feeling in the domestic cups the lower league teams are stronger. I've no idea how its done but when i played City my hardest games were in the Domestic cups against the weaker teams. I had no problem beating Arsenal, Liverpool, Chelsea or Man Utd., but when i played the weakest team in the season in the premiership, Wolves i made 3-3 in the away and a 2-1 at home with a goal in the last 5 mins, and a verry few opportunities.I had the same problems with wigan Blackpool and few teams from npower Championship. And right now I am playing Darlington, I am in my second season and I am in L2 and I've already beaten 3 teams from higher leagues in the LC and lost to a amatuer team in the FA cup, so I guess the underestimation and the over confidence have much to do wiht these succeses
Login to Quote

You are reading "Worst Team to make a Domestic Cup Final?".