Hi guys! i've decided to start off with a story about Wisła Kraków. Since i've never actually done it before but it sounded so fun when i looked at other stories and i always wanted to test this. Alright let's start off with some information/fixtures/transfers/tactics.

Comments: Good first half, did well and managed to create alot of situations where we should have done 4-5 goals against them. The match ended 2-1 to our favour but still it was a poor match in my opinion as we should have scored more goals on them.
Wisla Krakow - Montpellier Hérault SC 0-3

Comments: Not much to say really, we did good at first half where we managed to pressure them to their own half and taking up the game for Wisla, unfortunaly they managed to come together and score 3 goals against us.

Comments: Another weird loss against a lower team which was expected to lose against me. We took the first half goal with Rafal boguski scoring a screamer from 25 yards. After that my players started to become slacky after a hard working Podbeskidizie did their first goal in the second half, then something occured.. my goalkeeper was out and trying to take the ball away from a opposite player, but as the referee saw it he did foul him(using his hands to take the ball, but took the opposite player instead) and the penalty was in, which made it 1-2 for Podbeskidizie. My players protested but after that goal we never manage to come in the game really.

Comments: This match had much difference as we really did good both in first half and second half. My players we're motivated and had 5-6 chances to score at the goal, but was unsucceful due to the exceptional goalkeeping skills and later on Feyenoord did their first goal in the second half (56th minute) which resulted in only 0-1 for them.

Comments: Good game, we did both goals in the first half and had lots of chances to make the game 5-0, but as for my strikers we was unsucceful and only did 2 goals. The opposition players had a good formation which made some big trouble for my team which i diden't expected from the team report. But still we managed to win with 2-1 which was decent enough to close the match.

Comments: Another match against this team which i lost to 1-2 in the previous match. As expected we did the first goal with a header from Genkov. In the second half (60th minute) their striker did a wonderful freekick goal against my goalkeeper that he coulden't take and the match was coming to an end with only 1-1 from it.

Transfers
Comments: Since i only brought two players to the squad for the first season, it seemed decent enough. Reason for this was because i had a good Youth Team which was capable of handling some positions that i need a man or two extra on. Overall the two players did very well their first season at the club, and specially the Dino Spehar loan which proved to be a good investement for a short-term option loan for the club at the moment.

Decided to roll dice on a 4-4-2 attacking and fluid formation: 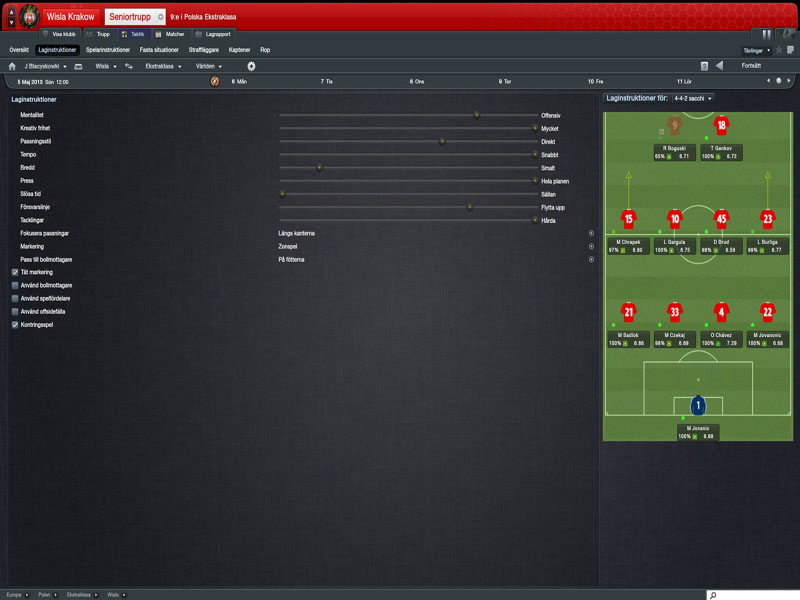