And we will all be here to support you as you do.

I hope this story will be a great one.

I wish we both do great


We are not really sibling. And surely - we are no rivals

Thank you very much Kiwi. By the way, sorry it's going slow. When the demo will come out story will go way faster
Login to Quote

Arvind
9 years
When are you starting the game updates? Looking forward to it.
Login to Quote


As soon as I will have the game. Probably at the end of the week, because the demo is coming out. But don't worry, there will still be interesting posts before

A.C. Milan has formally announced today the appointment of new manager, Paolo Maldini.
"Maldini is the best guy for the job and we are very happy to have him" says Adriano Galliani. "Back in the days when he was our captain, everyone looked up to him. We hope this will happen now as well."
For those of you that don't remember Maldini, here is some info:
Maldini played at a world class level for his entire career spanning 2 and a half decades, and won the Best Defender trophy at the UEFA Club Football Awards at the age of 39. He came second to George Weah for the FIFA World Player of the Year Award in 1995, the closest a defender had ever reached to winning the award, until Fabio Cannavaro, a fellow Italian won the award in 2006. He was also the Milan and Italy captain for many years and was considered a leader amongst leaders by fellow footballers, leading to the nickname "Il Capitano" (the Captain). Paolo's father Cesare formerly played for and captained Milan, and is a successful national U-21 manager.

Is Maldini the way for A.C. Milan to come back to the top? stay tuned and find out

Last update: Guardiola - "I have zero interest in managing A.C. Milan"
Next update: Maldini's tour at the club
Login to Quote

The FM Rookie
9 years
Long live Maldini! GREAT START TO YOUR STORY OR!
Login to Quote

Kiwi
9 years
Don't worry about the speed of the game, concentrate on setting a style that you feel comfortable with continuing to write with over the next year or so. I have only managed to get about eighteen months in my Dynamos story, but I just keep chipping away at it!!!

Maldini's tour at the club

Assistant manager Mauro Tassotti took newly assigned manager Paolo Maldini to a tour at the club. Although Maldini already knows everything there is to know about A.C. Milan, he was glad to take the tour.
As you know, started Tassotti, the club was founded in 1899 and currently plays at the Seria A.
The club describes itself as The Most Successful Club with 18 officially recognized UEFA and FIFA titles.

Milan has won four world titles, more than any other club in the world, having won the Intercontinental Cup three times and the FIFA Club World Cup once. Milan also won the European Cup/Champions League on seven occasions, second only to Real Madrid. They also won the UEFA Super Cup a record five times and the Cup Winners' Cup twice. Milan won every major competition in which it has competed, with the exception of the Europa League (in this competition they have lost two semifinals in 1972 and in 2002). Domestically, with 18 league titles Milan is the joint-second most successful club in Serie A behind Juventus (28 titles), along with local rivals Inter. They have also won the Coppa Italia five times, as well as a record six Supercoppa Italiana triumphs.


Milan's home games are played at San Siro, also known as the Stadio Giuseppe Meazza. The stadium, which is shared with Inter, is the largest in Italian football, with a total capacity of 80,018. Inter are considered their biggest rivals, and matches between the two teams are called Derby della Madonnina, which is one of the most followed derbies in football. As of 2010, Milan is the third most supported team in Italy, and the seventh most supported team in Europe, ahead of any other Italian team.
The club's financial state is not good. We have a loan debt of £460M and you will have to try and shrink this debt.
We have excellent training and youth facilities, and the two most notable home grown players are: 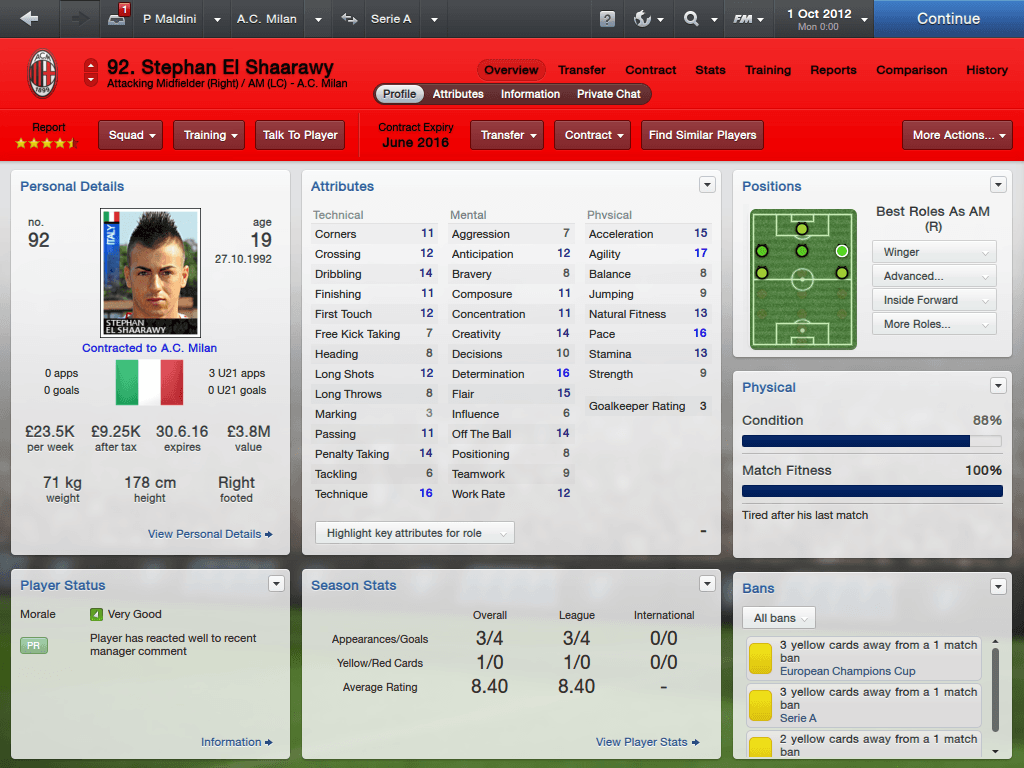 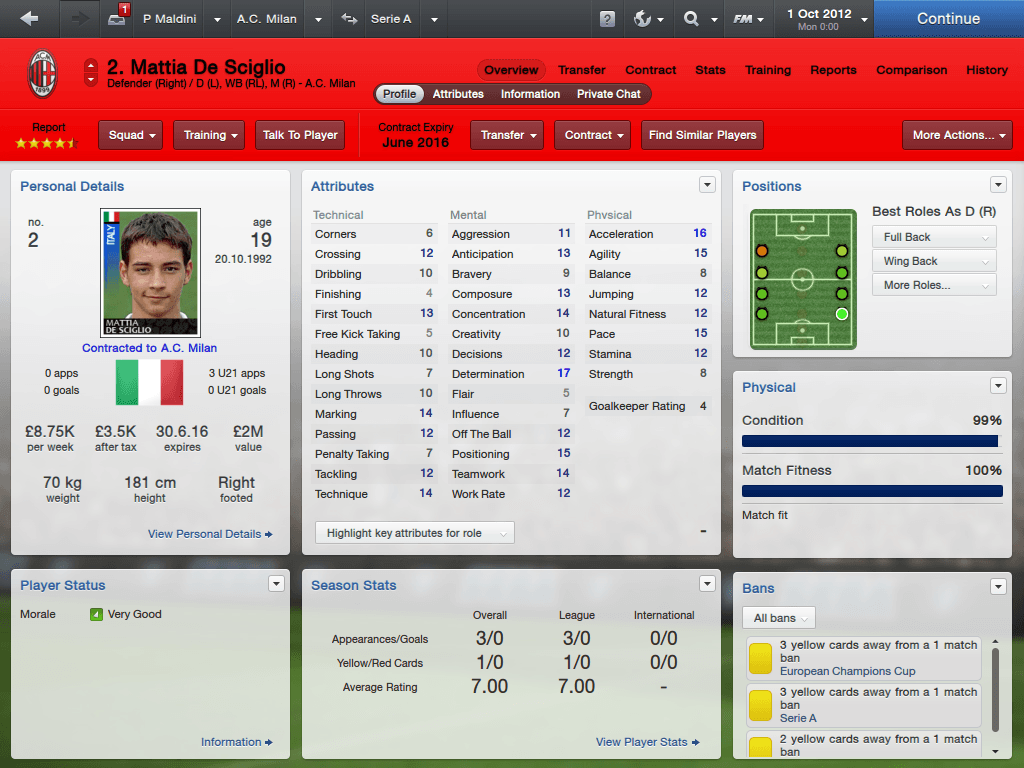 Milan kits for this year are those: 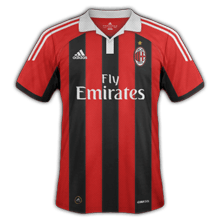 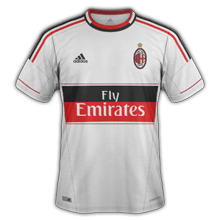 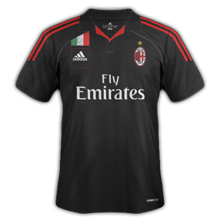 Paolo, I wish you good luck and I hope you have what it takes to help Milan.

Akash
9 years
Or, you are doing a splendid job with your story. Although you haven't done anything game-wise yet, I'm excited to see what you are going to do next.
1
Login to Quote

The FM Rookie
9 years
Wow! This story is so polished and it is just unbelievably addictive to read. Screw sex, I'll read your story!
Login to Quote

Manager Paolo Maldini has called for a first team meeting today, in order to boost the squad's confidence.

"Guys, I know things haven't worked so well for us lately. But we are fighters. We never give up. When we fall, we fight and carry on. Never give up, and always remember - A.C. Milan is the most successful club. It's an honor to wear the red and black shirt. If we chose you to be our warriors, it's because we have full confidence in you! There is no team in the world that we can not break. We are starting a new era for Milan. Make it the best era so far! FORZA MILAN!"

andrew98
9 years
Good start
But I repeat your story is bad, because is about Milan, manage inter and it will be perfect

Waiting you to start the game -_-
Login to Quote

Waiting you to start the game -_-

I want to start as well. Demo out in friday, so i'll probably start then.
Login to Quote

or.dabool
9 years
Guys, haven't played a single match and yet 1000+ views. Thank you all.
Login to Quote