Louis O.
9 years
That is some weird writing. But it doesn't matter, it's brilliant!
Login to Quote

Khejan
9 years
Great reading so far Arvind, keep it up and I agree, the Rumour Mill part is a nice touch =)
Login to Quote

Toon
9 years
Liking the Rumor Mill, I tried a similar idea once but this is better and more humorous.
Login to Quote 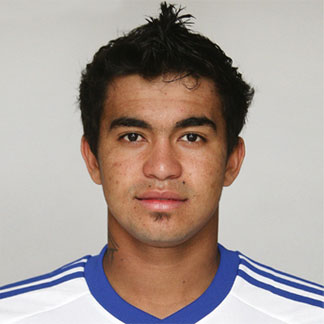 
Bayern manager Oliver Kahn has made two additions to his squad this week who both joined from the same club - Dynamo Kiev. The first, Dynamo winger Dudu joins the German club on loan with a possibility of a future transfer.

The Brazilian international has two caps to his name and his good form with Cruzeiro also earned him a move to Kiev in the last winter transfer window. But the winger has failed to show his talent in Ukraine, and club have let him go on a loan hoping he comes back as a better player.

Dynamo manager Oleg Blokhin talked to the media about the loan deal.

"For some people it would seem odd to loan him out to a bigger club, but I think the decision we've taken makes sense. Bayern have better coaches and training facilities so there is a good chance he will pick up some things from there. They also have world class players like Robben and Ribery and it will be good for Dudu to spend time with them. Maybe a change of scenery is what Dudu needs to regain his form and come back to Dynamo. He's a very good young player and if Bayern decide to sign him on a full transfer then it still is a good deal for us because we make a profit."

Die Bayern's second signing from Dynamo was that of versatile Ukrainian midfielder Denys Garmash for a fee in the region of £13m.

"We saw Denys when we went to Kiev to sign Dudu. We went back to Munich and saw some videos of his style and then we decided that we should sign him. He's a complete midfielder, he can play defensive midfield, central, and attacking. He's an intelligent player - quite similar to Schweini but he's sort of the younger, more attacking version. He will enable us to change our game plan when we need to, and he definitely has to potential to be one of the world's best in a few years."

"I'm sure he'll justify his price tag in a few years." Kahn added.
Login to Quote

k1rups
9 years
Absolutely awesome signings! They will serve you very well and I hope they both get the game time to develop in to strong players
Login to Quote

Hortensius
9 years
Garmash is a great signing and good value. one of my favourite players in game so brilliantly well rounded. With game time he's top notch
Login to Quote

Jer
9 years
Great signings, could I have a screenshot of both these players?
Login to Quote

Kane
9 years
Quality signings for a quality story. Keep it up Arvind, loving every update!
Login to Quote 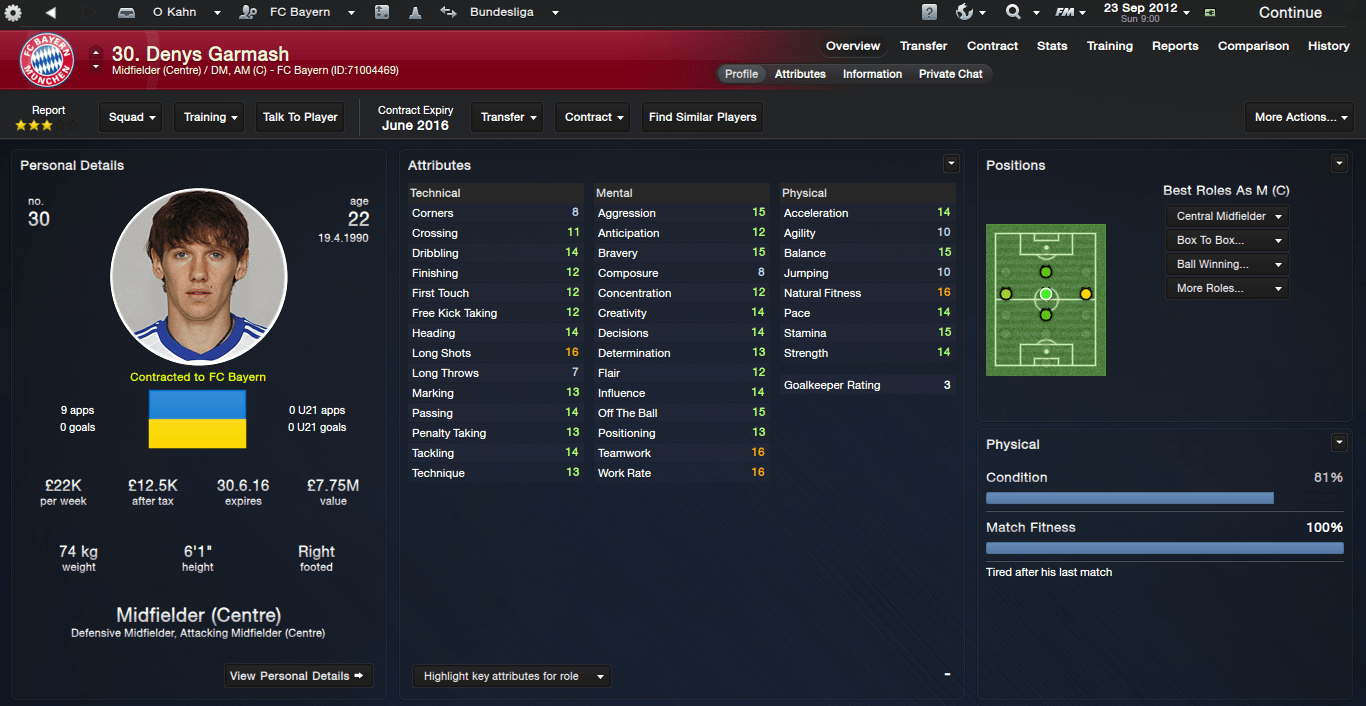 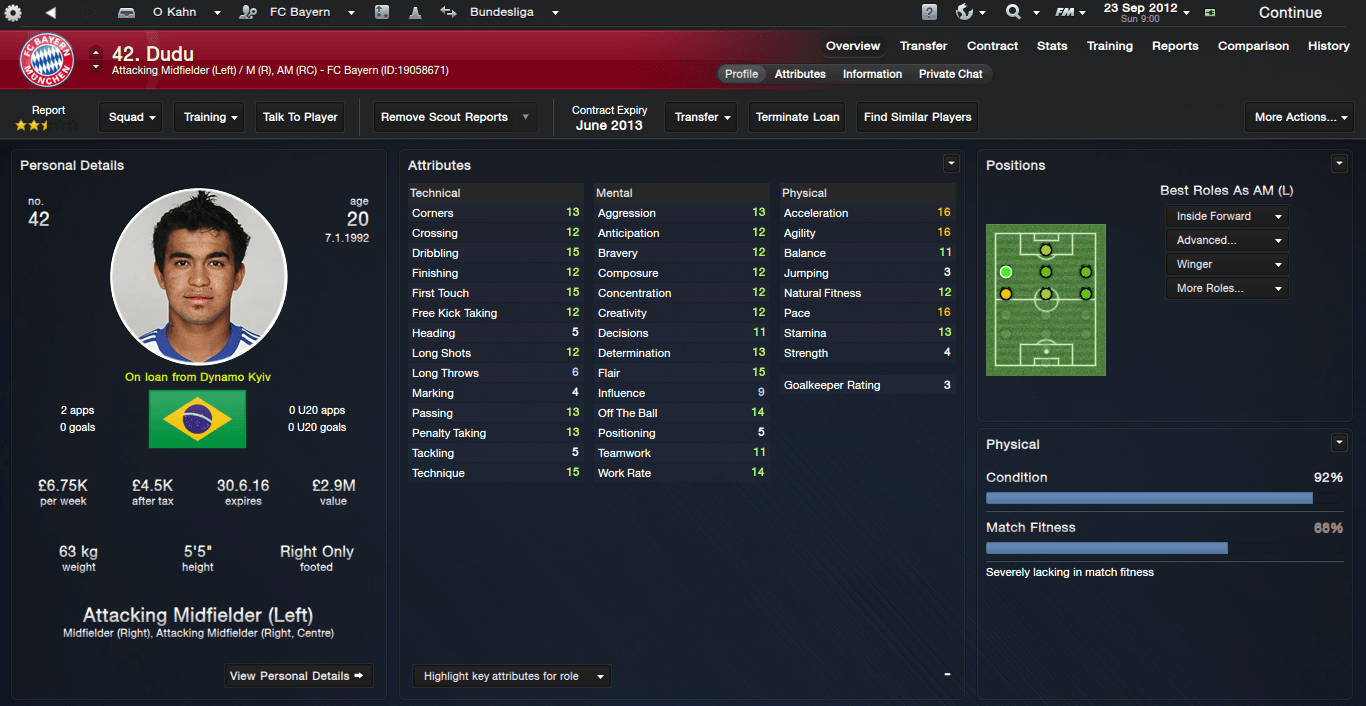 Note: Their assistant ratings are obviously lower than they should be, because I have the likes of Schweinsteiger is central midfield and Robben and Ribery on the wings and since ratings of a player are partially his comparison to the other players in the squad playing in the same position.
Login to Quote


Bayern Munich have announced the shock signings of three players about whom fans already have their doubts about.

Argentine Facundo "Chucky" Ferreyra has shockingly signed for Bayern Munich for a big sum of £8.5m - just a month after he signed for Velez from Banfield a fraction of the fee Bayern paid for him - £1.3m.

Manager Oliver Kahn was quick to defend his decision to sign the striker. "We know that the fans will be wondering why we didn't sign him before Velez did and save ourselves six million. Well, the fact is that he only came to our attention after we hired an Argentinian scout. Most of our fans would never have heard of him, but Juventus, Inter and Newcastle were all after him last season. But he wanted to stay on at Argentina for a few more years so he signed for Velez. But when Chucky found out that we were interested in him, all we had to do was agree a fee with his club, because he had no hesitations in joining us. We are very impressed with what we've seen of him. He can score with his head and his feet and he's got that strikers' instinct. He's definitely got the potential to be world class, and hopefully we can unlock that potential."

Kahn also asked fans to be patient with the 21-year-old. "He's just come into a totally different environment, with a different language and different teammates. He's come here alone, and naturally it will take a person a while to adapt. He only speaks Spanish at the moment, but we've arranged for him to take some German classes. But the good thing is we have Mario Gomez who can help him settle in since he speaks Spanish, and hopefully Chucky can also learn from him and improve his game at the same time."

Welsh international Ashley Williams joins Bayern from Welsh club Swansea for a fee of £6.75m. Fans aren't sure if Williams is ready for the jump to the bigger club, but are willing to give him a chance.

"Ash is a player with great all-round ability. He's solid defensively, good in the air and is very good with the ball at his feet for a defender. He's played for Swansea who are a smaller club, no offense to them, but Ashley has toughed it out in the lower leagues. He's a tough guy mentally because of that, and I think he will help our title chase this season."

Italian full-back Eros Pisano has signed for Bayern on a six month loan deal from Genoa, where he has been told that he is not needed. It might seem as a big shock that Munich have signed a player not wanted by a mid-table Serie A club, but Kahn has assured fans that Pisano has only been signed for cover because of their injury crisis at full-back - with David Alaba and Rafinha both being out for 3 months.


Kahn has also stated that this will be the end of their transfer business for the summer window. "I think the squad we have has enough to take us through at least until January, but hopefully we won't need to make too many changes in the winter either. We have a strong squad, a great first eleven and we have enough depth to see us through as well. I'm confident that we can put up a challenge for the title."
Login to Quote