Fergie: Past, Present, and Future 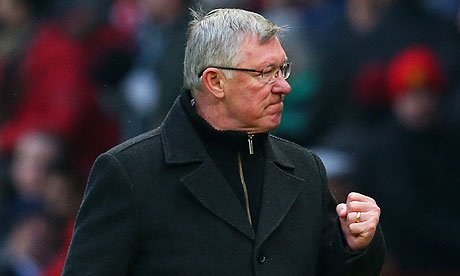 8th May 2013 marked the day when Sir Alex Ferguson finally announced his retirement from management, after nearly 40 years of being in various hot seats from St. Mirren to Manchester United. 26 of those years were spent at English club Manchester United. To stay at any club in this day and age for more than a few years is a very respectable achievement with the amount of time it takes chairmen to lose their patience with the managers now. So to stay at a club for over a quarter of a decade, like Sir Alex has done, is to be truly hailed.

As a Manchester City fan, it pains me to say this and write this, but I honestly respect Ferguson for the work he's done at United. When he came in back in 1986, United were in 19th place in the old First Division, fighting relegation, and without a title win since the 1966-67 season. Looking at United now, it seems impossible to think that they could go 26 years without winning a league title. Since Ferguson joined the club, United have nearly trebled the amount of league titles that United have, from 7 to 20. Sir Alex has also managed United to 25 other trophy wins, which is almost a trophy a year, and this is not including all the league titles he's won.

It's not all about trophies in football. It's about trying to build a team that can perform well as a unit too. In his time at United, Sir Alex has built 3 or 4 teams capable of challenging for the league title, from the Golden Generation of Beckham and Neville, to the more recent times of Van Persie and De Gea. It takes hard work to be able to continue to build teams and then make them work as a team. Yet another example of why Ferguson is one of the greatest managers ever.

Now that Ferguson has decided it is finally time to relieve himself of his duties with the Red Devils, we have to look to the near future, and who United might decide is the best candidate to take the team forward. Here are some of the candidates, and some of the pros and cons of appointing each:

Jose Mourinho: as soon as Sir Alex announced his retirement, the name on the lips of many United fans I spoke to at the time was that of Mourinho, and it's obvious why. He's one Champions League trophies with Internzionale and Porto, and also won league titles in four different countries. That's no mean feat at all, and shows he is a very good manager. But I see a problem with United appointing him, and that is that he isn't very popular in England with non-Chelsea fans. The United fans wouldn't really accept him as their manager, so would give him the reception that Benitez gets at Chelsea. Mourinho has also managed to get on the wrong side of some of Real Madrid's key players, like Sergio Ramos and Iker Casillas. This means there could always be the risk of him alienating some of United's key players. Do the board really want that to happen? In my opinion, there are too many negative possibilities for United to appoint Mourinho.

Jürgen Klopp: in recent times, Jürgen Klopp is fast becoming one of the most well-respected managers in Europe, if not the world, with Borussia Dortmund. In 2010-11 and 2011-12, he guided Dortmund to the Bundesliga title, which is not easy when you're up against the likes of Bayern Munich. Dortmund also have some great young players, like Marco Reus and İlkay Gündoğan, meaning they will be a force to be reckoned with in years to come. Even this year, Klopp has guided his team into the final of the Champions League after beating Real Madrid in both the group stages and the semi-final. They'll face their big rivals Bayern in the final at Wembley, who have already wrapped up the league title by 20 points this season. And that's the reason I don't think United will appoint Klopp, because they don't want a manager who has finished so far behind the leaders this season (much like Mancini has for City).

David Moyes: at the time of writing, betting companies have stopped taking money on David Moyes to be the next United boss, with the odds of him being appointed lying at 1-50, making him the frontrunner by a huge margin. I have to say, I really like Moyes as a manager. He's done really well at Everton given the situation he's in. He's never been given a huge amount of financial backing by the club, yet still manages to consistently finish high in the table and challenge for European football. It takes a very good manager to be able to accomplish that, and that is why I believe United will want to appoint him to take them forward. However, I do have one argument to make. If you look at the top clubs in the world like Barcelona and Real Madrid, they would never even consider appointing a British manager now. Neither would Chelsea, or City, who both have foreign managers now, and have done for a while. And this is due to one reason: British managers aren't good enough. There are a few exceptions to this (like Sir Alex), but the majority will not succeed. I couldn't see City, or Chelsea, or any other top side appointing Moyes, which could make it a risky move for United.

In my opinion, I don't think that any manager will be able to come into the Old Trafford hot-seat and straight away be as successful as Ferguson has been. No matter whether its Mourinho, Klopp, Moyes, or someone else, there will definitely be a transition period where United won't be as good as they are now. I think they'll definitely come out of it just as strong, but it might take them a while to adjust after the reign of Ferguson.

The question I'm now asking myself is whether anyone can match what Sir Alex has achieved. He's been one of the world's greatest ever managers, and it will take a very special talent to better his achievements. I find it very odd that I'm able to compliment Ferguson in this way now, whereas in the past I've been unable to give him any credit for his ability, mainly because of my City bias. I can't keep not giving him credit though, and it's time to face the music that he is one of the best manager's to have ever graced the game.

Roberto.Mancini
7 years
Sir Alex holds more titles than whole Man City and more than Liverpool and Arsenal won together the last 25 yrs ,so that one definetely hurts .
Login to Quote

You are reading "Fergie: Past, Present, and Future".