JordTheDesigner
9 years
Arvind: Thanks mate , haha they are the best

Padster: It will be interesting to see
Login to Quote

LiamB
9 years
Riquelme (however you spell it) is a hero!!!
Login to Quote


Diego left 8 years ago but after falling out with his new manager could a return be on the cards ? Internacional want Hector Perez in return who has only mustered one goal in 18 games for the yellow submarines.

Here is Diego's highlights of his Villarreal career:

Diego Forlán's debut for Villarreal was on 30 August 2004. He started away to rivals Valencia CF and scored his club's goal in the 77th minute of a 2–1 defeat. His next goal came in a home 2–0 win over Real Zaragoza on 3 October, and was followed with an equaliser in a 1–1 draw at Real Mallorca and the final goal of a 4–0 win at home to CD Numancia. Between 12 December 2004 and 16 January 2005, Forlán scored seven goals in five Liga matches, including a brace in a 3–0 home victory over FC Barcelona on 9 January. On 22 May 2005, he scored his first hat-trick for a European club with all of Villarreal's goals in a 3–3 away draw against eventual league champions FC Barcelona. A week later he scored two in a 4–1 victory over local rivals Levante UD as Villarreal ended the season in third, their first Champions League finsh.[13] Forlán won the 2004–05 Pichichi Trophy for most goals in La Liga, with 25. He also shared the 2005 European Golden Boot with Arsenal striker Thierry Henry.

His goal rate declined in the 2005–06 season as Villarreal underwent several changes, yet the club reached the semi-finals of the Champions League where they were knocked out by Arsenal.

He left the following year for 21 Million Euros to replace Fernando Torres at Athletico Madrid.
Login to Quote

Okikos
9 years
It would be great if you could bring both of them back.

Kane
9 years
DIEGO FORLAN IS MY FAVOURITE PLAYER EVER. BRING HIM BACK OR I WILL NEVER TALK TO YOU AGAIN.
Login to Quote

AlexSonwild
9 years
I would like Forlan too. Great story so far. Keep it up 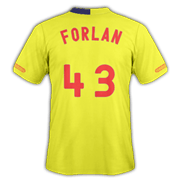 Marcos Senna has confirmed that Villarreal have secured the signing of one of the clubs greatest ever players in Diego Forlan.

The Uruguayan has signed from Internacional on 32 Grand per week and was a straight swap for Hector Perez who was struggled under Senna.

Many fans have appreciated the move and have already bought there new home kits with Forlan 43 on the back.

JordTheDesigner
9 years
Guys thanks for all the comments but after yesterday i thought it would be best to have a new story for a second chance , so sorry to disappoint im making a new story
Login to Quote