We needed to bounce back after the title clash defeat with FC Metz. We first had to face FC Rouen who had beaten us earlier in the season. It was a drab match but we managed a 2-1 win which I was very satisfied with.

Strugglers SR Colmar were up next and we walked onto the pitch expecting to dominate from the off. Overconfidence was evident and we could only muster a 1-1 draw.

We then faced Amiens SC Football who at the time occupied 2nd place. This game was just as important as the FC Metz one. They also had to face FC Metz after us so I knew that if we could get a result today, we had a real chance of ending the month on top. We played well in an even game and we shared the spoils in a 2-2 draw. Armeins and FC Metz would go on to draw 1-1 in the next game.

AS Cherbourg Football stood between us and top of the table. I expected a preformance from the lads, we had only been grinding results recently. Finally they responded and a 2-0 victory followed. We were top! 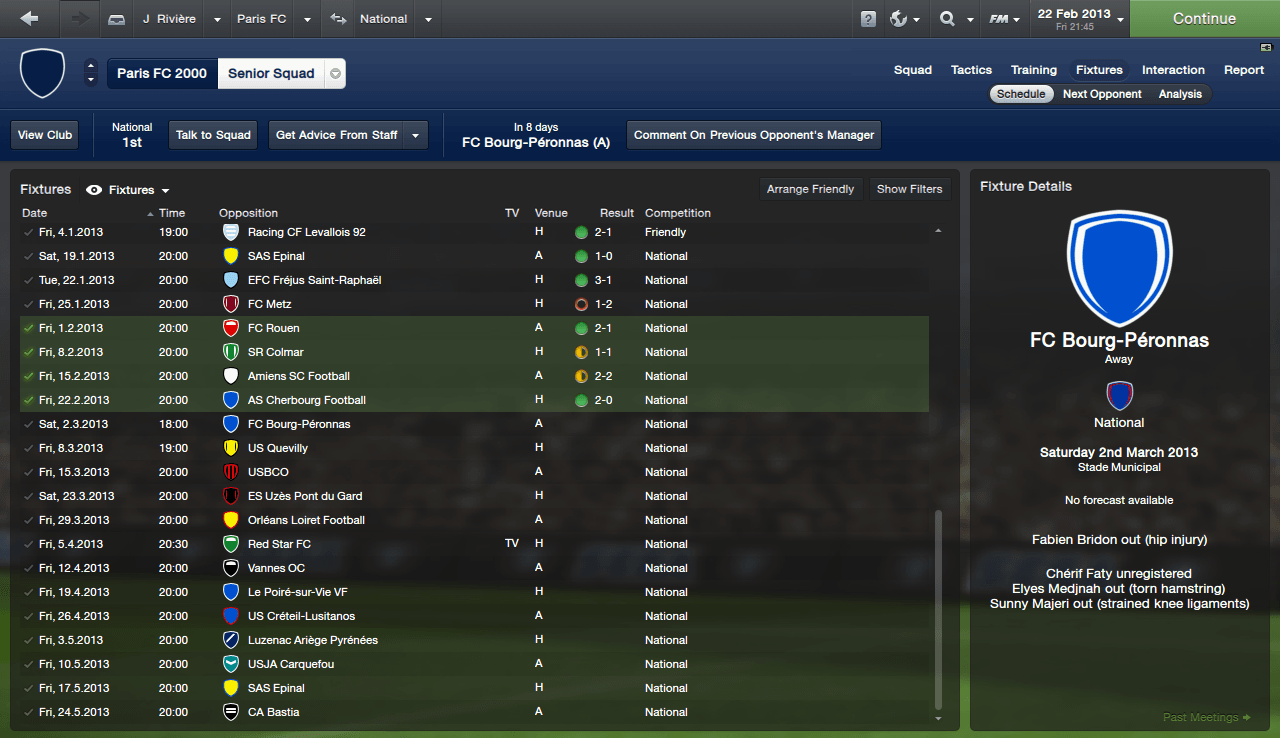 After regaining top spot last month, I was very confident we would push on and extend our lead at the top, and that's exactly what we did.

With a bit of a break at the start of the month, Our first team played the U-19's where they were defeated 2-1. I was quite happy with the development of the current under 19 team, even happier now that a new batch have just come and been signed up.

Two games in a week saw us claim 4 points with a 3-1 away win against FC Bourg-Peronnas and a disappointing scoreless draw with US Quevilly. We were now once again playing with confidence though and preformances were of a much higher quality.

We defeated USBCO 2-1 before ending the month very strong with two wins, firstly a 5-2 win against Uzes Pont Du Gard before finishing off with a 3-1 win against Orleans Loriet Football. Both Armiens and FC Metz had poor months which only stretched the gap at the top. The lowest we can possibly finish now is 8th, a few more wins and promotion is sealed. 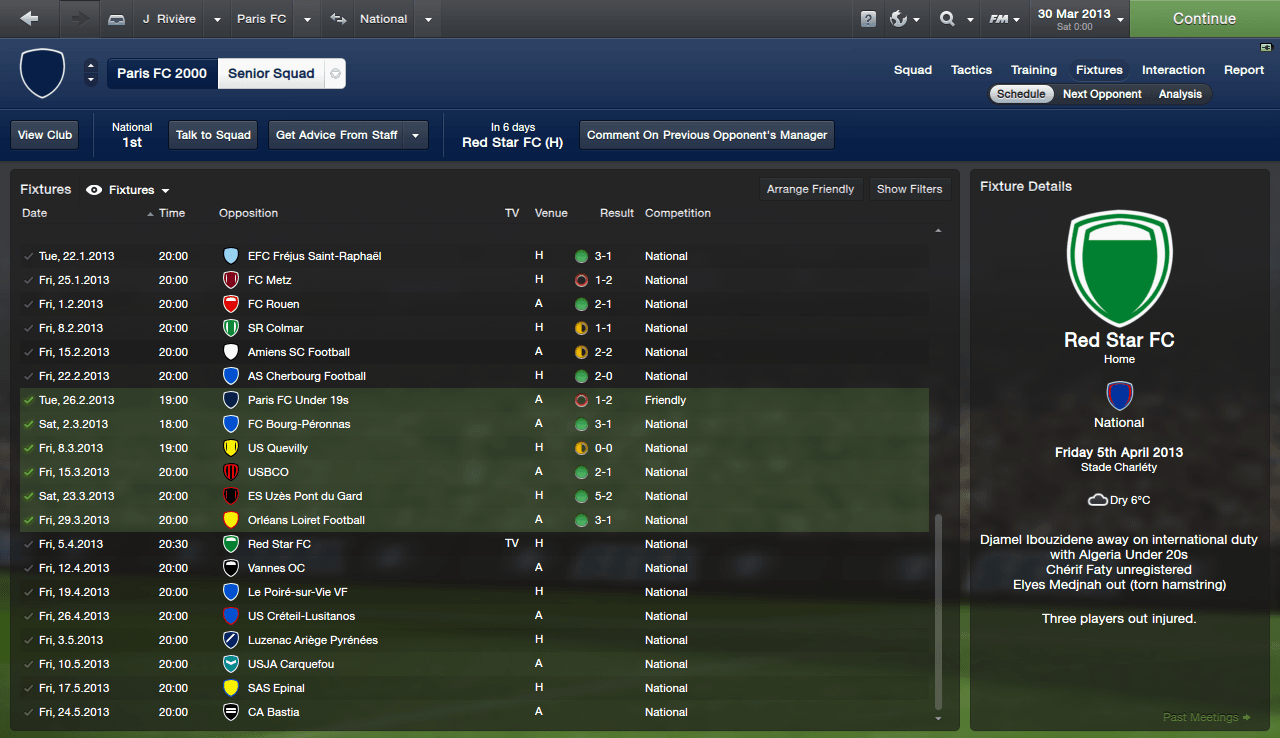 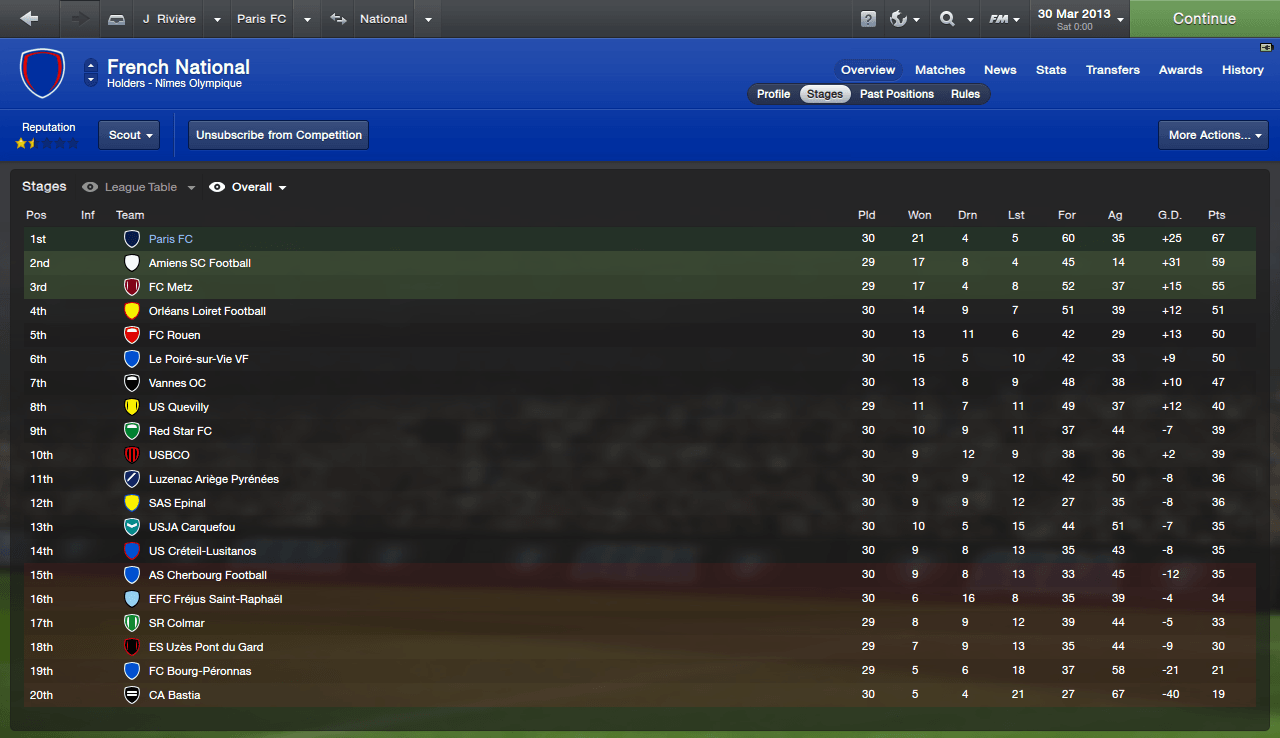 Paris FC are 1st, 8 points ahead of 2nd
Login to Quote

1st in the league too! Keep it up

Jack
7 years
What a great month! You have definitely won the title, there unless you go on a massive losing streak


Delighted, absolutely delighted! The last two months of the season weren't that great results wise but we did enough, The first time the club will ever play it's football in Ligue 2! The fact that we had such a young team makes this achievement even sweeter. 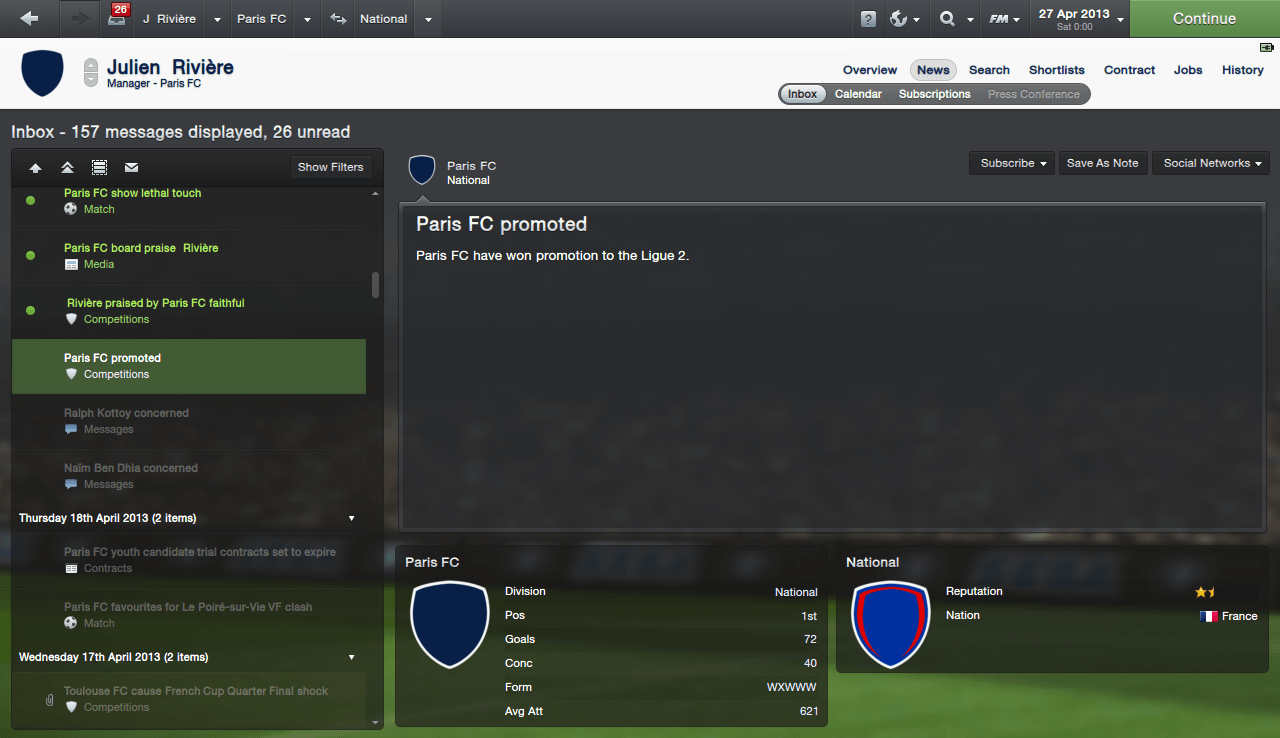 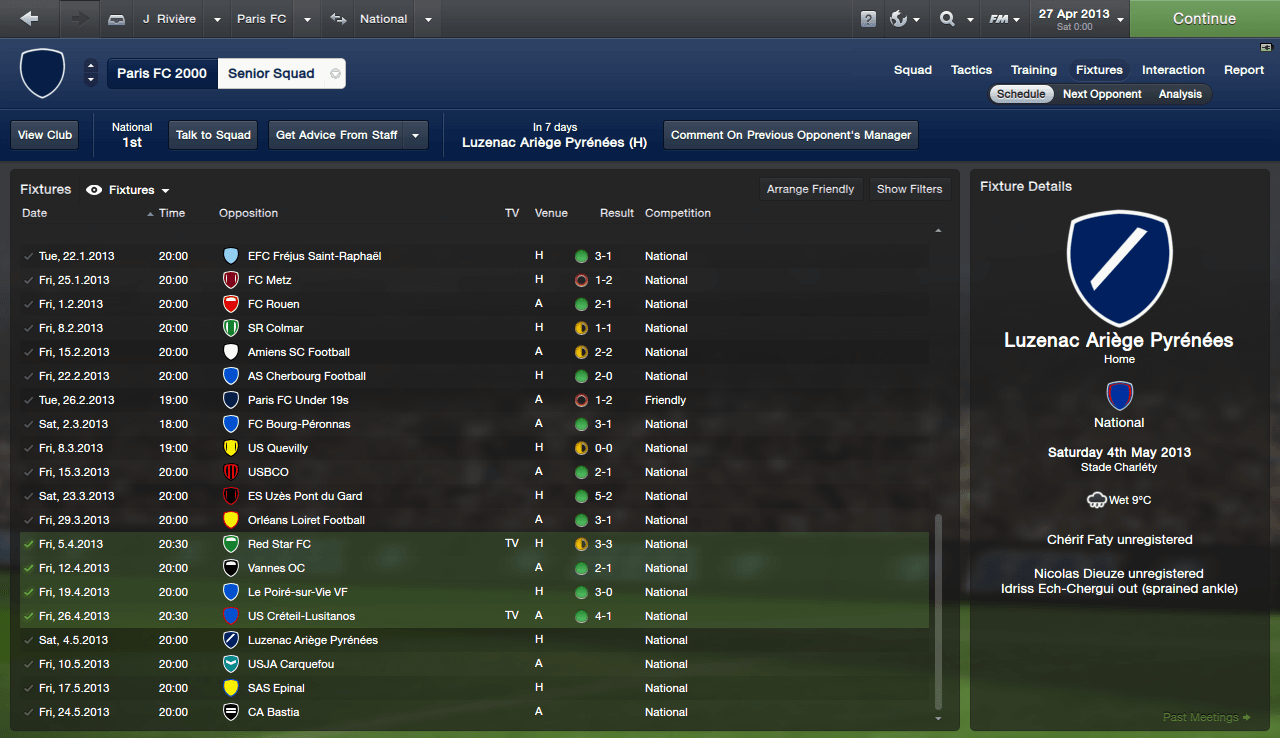 We went through the month unbeaten, drawing 3-3 against Red Star, our rivals, before mathematically confirming promotion against Le Poire Sur Vie. Once the full time whistle blew I was so overjoyed that I knee slided almost 10 yards of the pitch, The groundsman was not best pleased. Our fans invaded the pitch too, a truely memorable day. I was soon called into the boardroom and thanked for the work I had done. The chairmen pulled out a piece of paper from his drawer and put it in front of me. A new 2 year contract. I Signed it there and then without any thought. 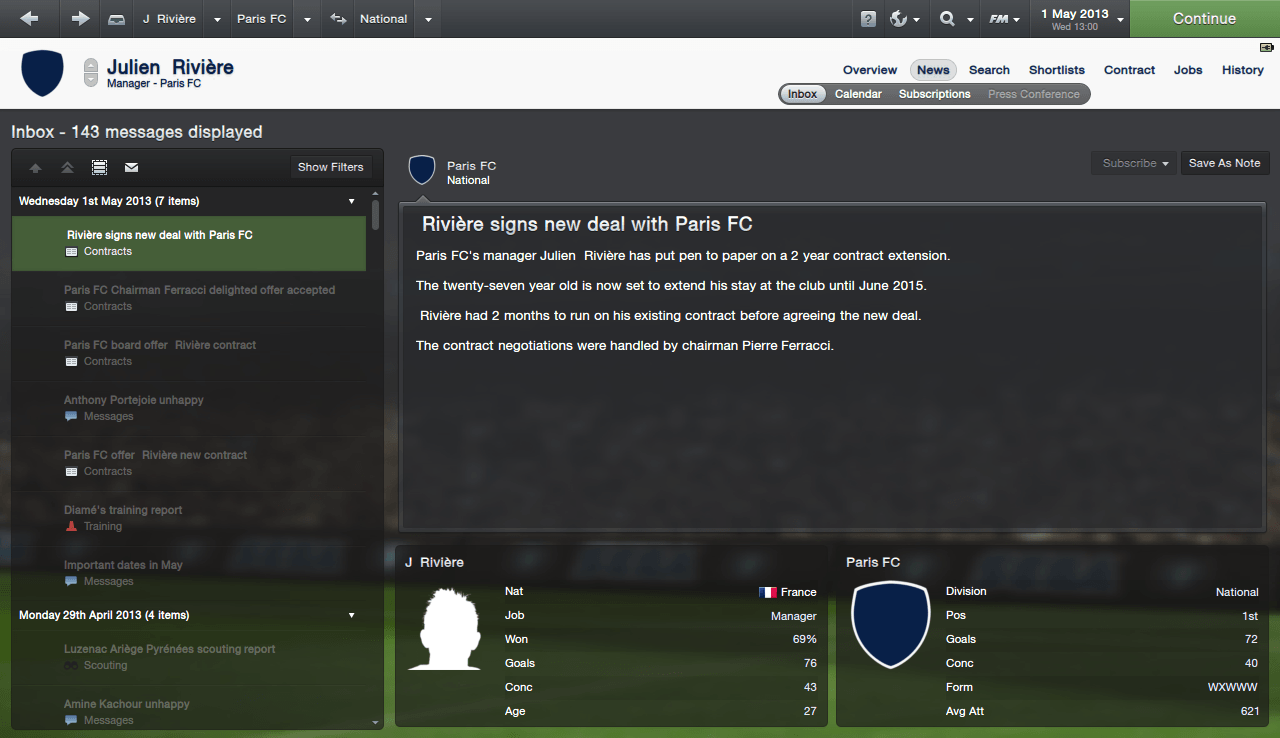 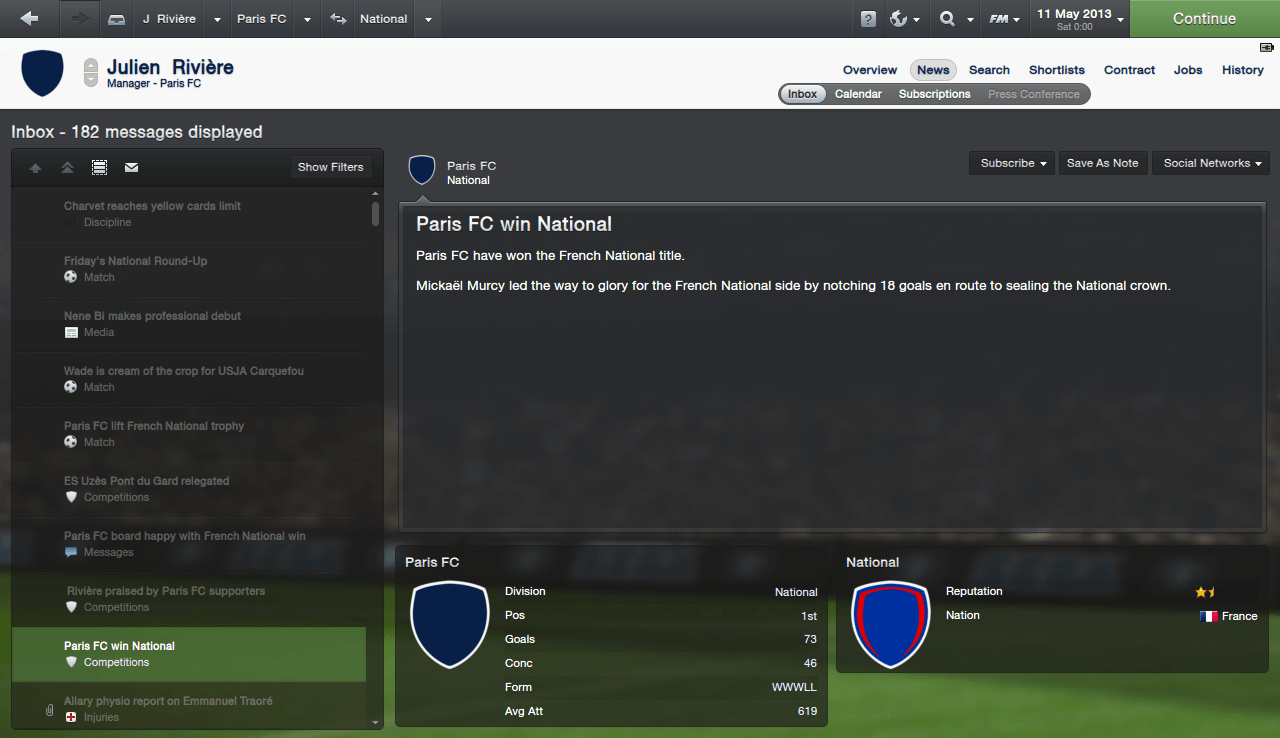 I had known for a while we would come out on top, but I must admit it is a relief for it to be confirmed in stone. The funny thing is that we won the league with a 4-1 defeat! Other results went our way so we were allowed a few bad preformances. We were very poor throughout the last month after the title was wrapped up but to be honest I wasn't bothered. The fact of the matter is we had quite a weak squad this year and I was shocked we managed to win the league. There will be a lot of changes in summer if we want to be competitive in Ligue 2. We will keep some of the young talent but others will have to be sold. Let's just hope the board are generous with the budgets! 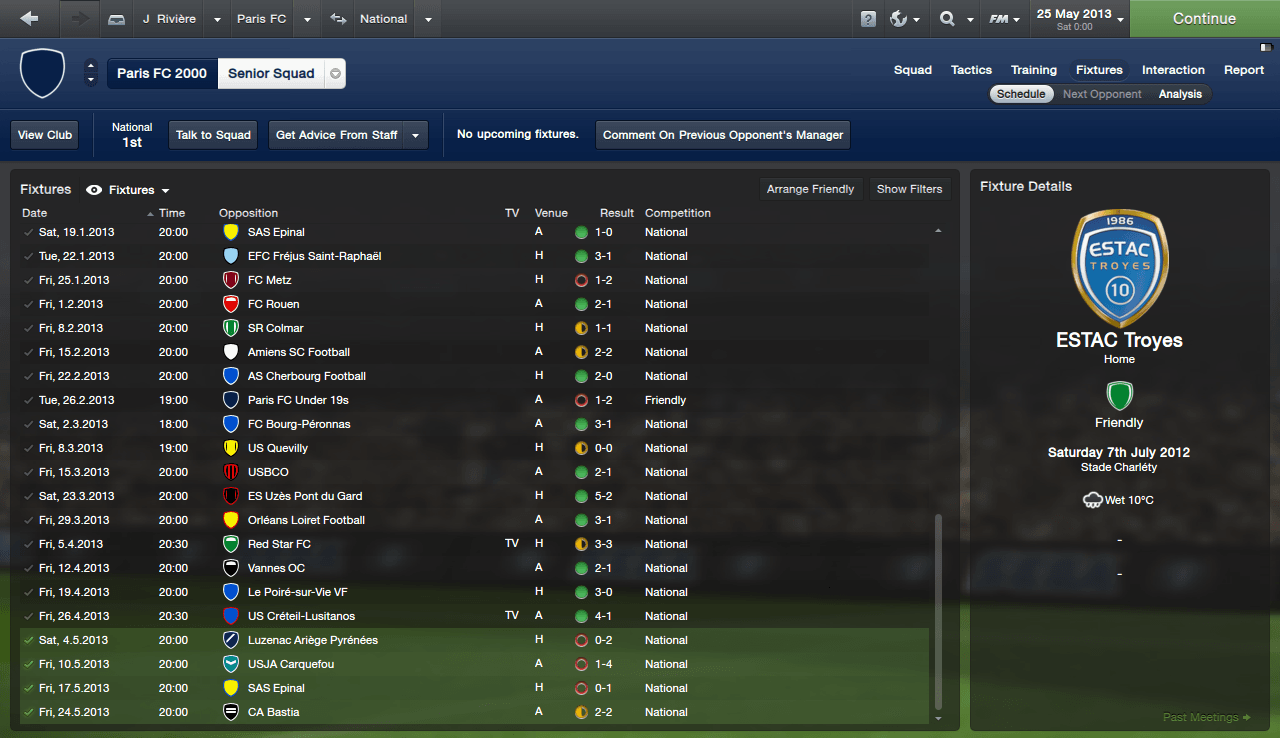 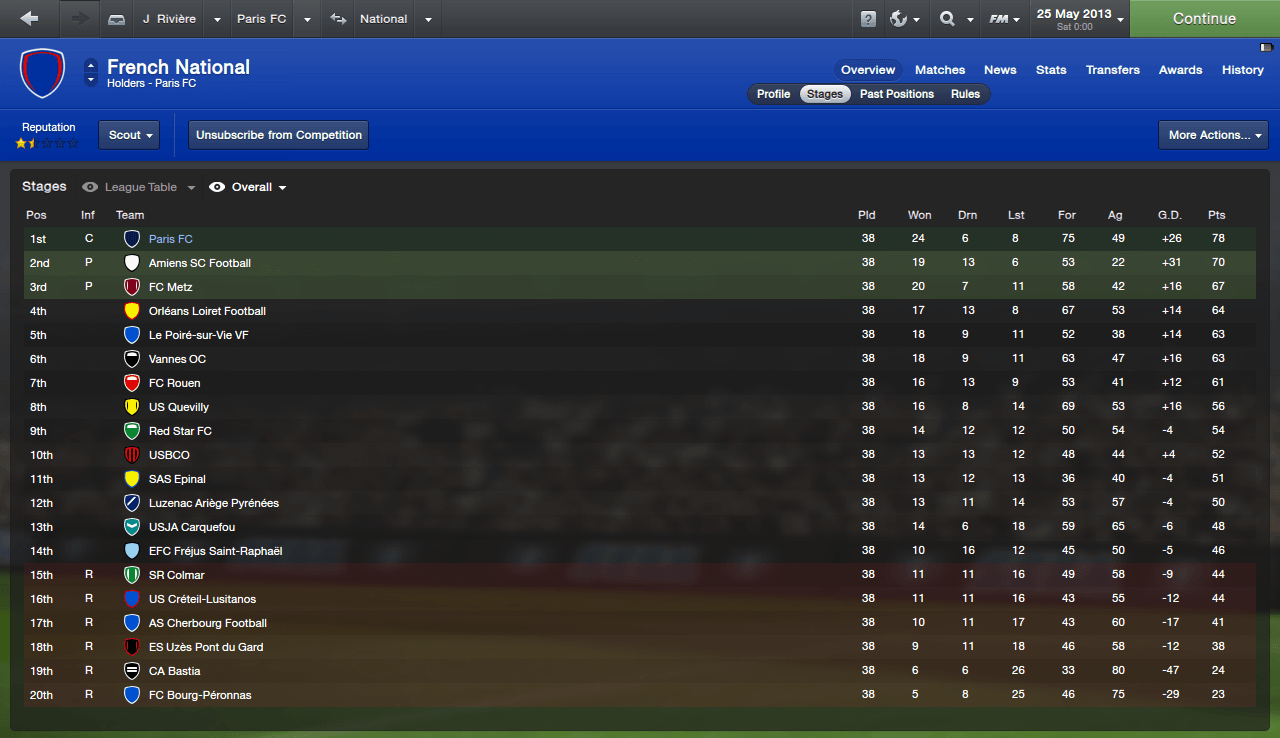 Paris FC are champions of National
Login to Quote

After our 1-0 defeat to SAS Epinal, we lifted the trophy as it was our last home game. The stadium was a sea of blue and white. This is what they had been waiting for since the split with PSG, finally some success. We brought the trophy around the pitch making sure we were close to every fan possible, we must have stayed out on the pitch for two hours after the final whistle.

When we returned to the dressing room I was met by my PA who told me that a press conference had been scheduled to celebrate the occassion in the next hour. I put on a new suit, cleaned up my hair and off I went.

LM - Congratulations Mr.Riviere on a fantastic promotion. Nobody predicted this before the start of the season. What was the key factor in your promotion?

JR - Well, the young lads who came in at the start of the season showed great enthusiasm and energy throughout the year, and they blended very well with some of the more senior lads in the team such as Fabrice Jau who was excellent. We have a great work ethic and never got down after a defeat, that was vital.

LM - You start a new adventure in Ligue 2 next year, the first time in the clubs history. How much of a task will it be to keep Paris FC as a Ligue 2 team?

JR - It's huge for the club playing in Ligue 2, Next season will be a fantastic experience. The income from Ligue 2 will benefit us greatly too. Of course next season will be about staying up. It's part of a 3 year plan I proposed to the chairman. Year 1 - to stay up. Year 2 - Mid table finish. Year 3 - push for promotion.

LM - Are you happy with the squad you have at the moment or will you be looking to try your hand in the transfer market?

JR - If we want a chance, then we have to make changes. The current squad is good, but only for the National. Hopefully now with the club stature improving players of a higher quality will be looking to join. I have a meeting soon with the chairman to see what he can provide me money wise for the coming season.

JR - Cheers buddy, will do
Login to Quote

JamieFMS
7 years
Congratulations on the success so far! Keep up the great work

LFCsedso
7 years
Congrats on promotion. You will be challenging the like of P$G in no time
1
Login to Quote

The board had told me that they had something important to tell me about the club, meaning I would have to return from my villa in Malaga where I was holidaying. I was fuming, it better be big news! 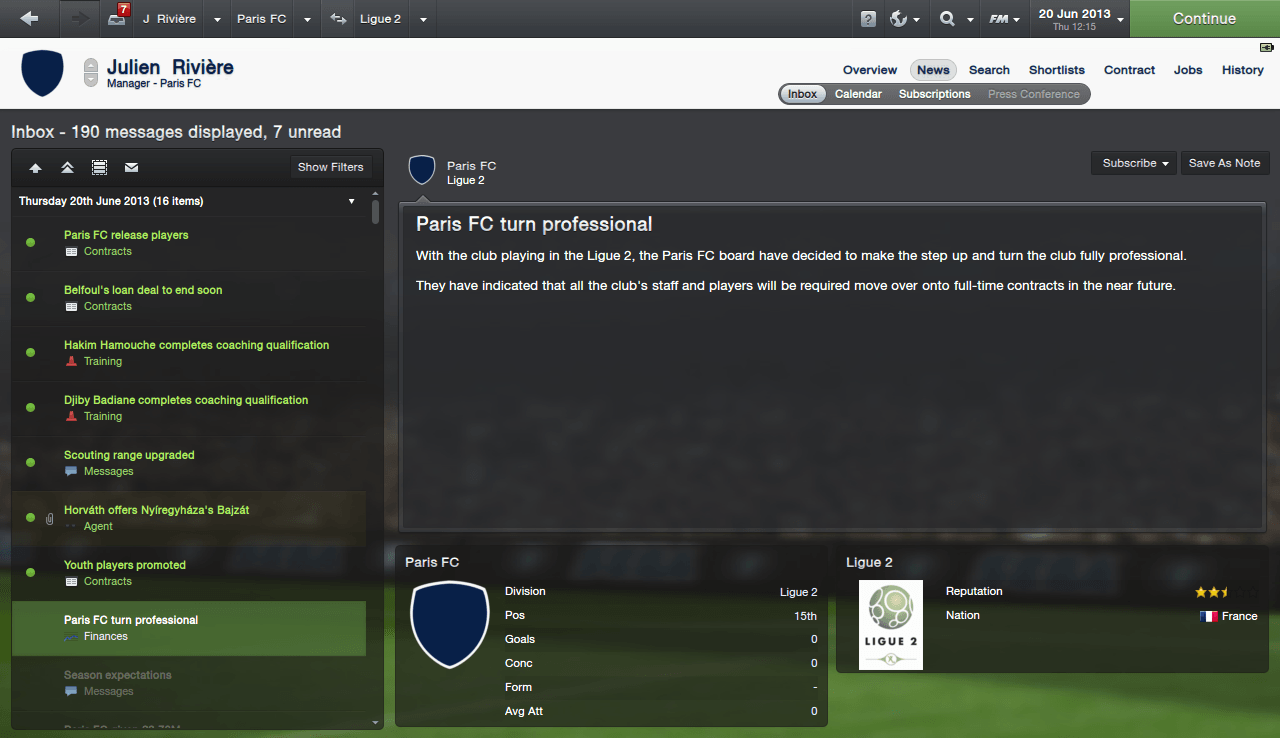 Great! We were now operating as a professional club, meaning we could entice players of a higher caliber, greater budgets and also our scouting network was expanded to throughout europe rather than just France. We were already seeing the Pro's of our promotion and it is an exciting time for the club. I cancelled the rest of my holiday and began looking for some talent to bring into the squad. 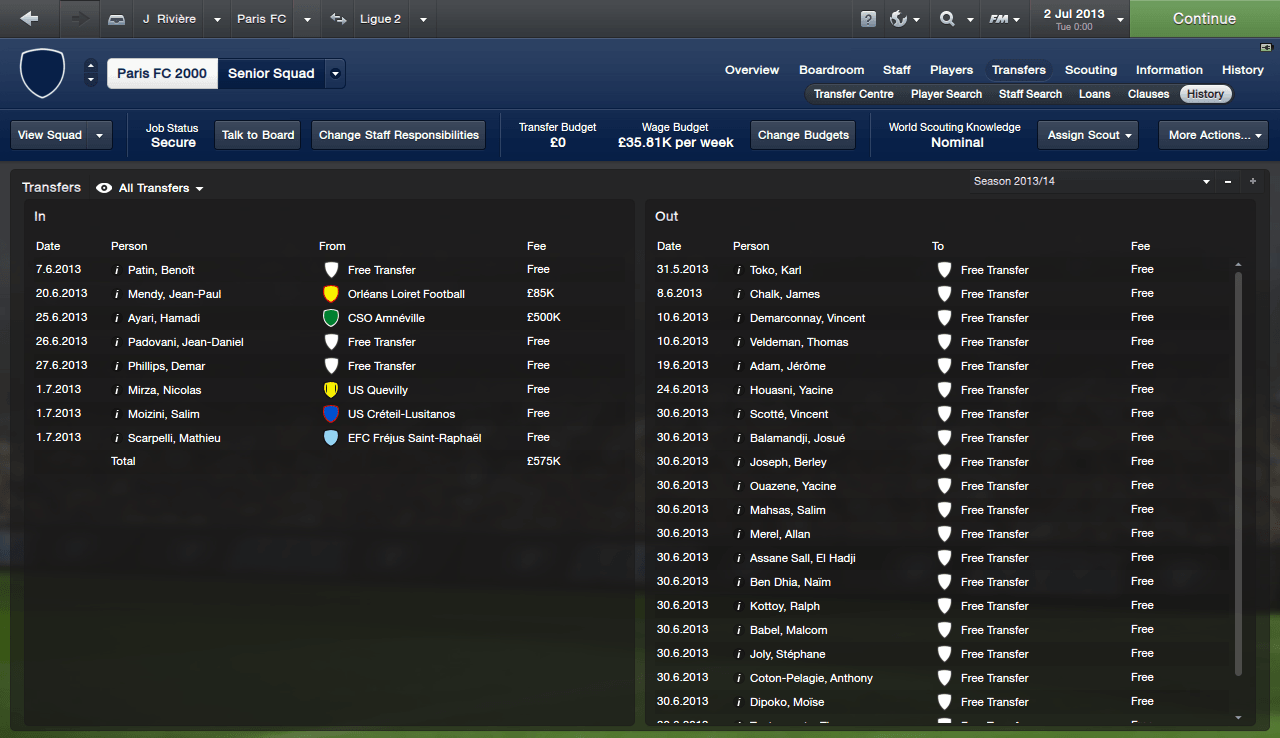 With many fringe players taking up wage still in the squad, They were the first to be axed. This allowed me to free up some wage which I utilised to bring in 8 players, 6 of whom joined on free transfers. 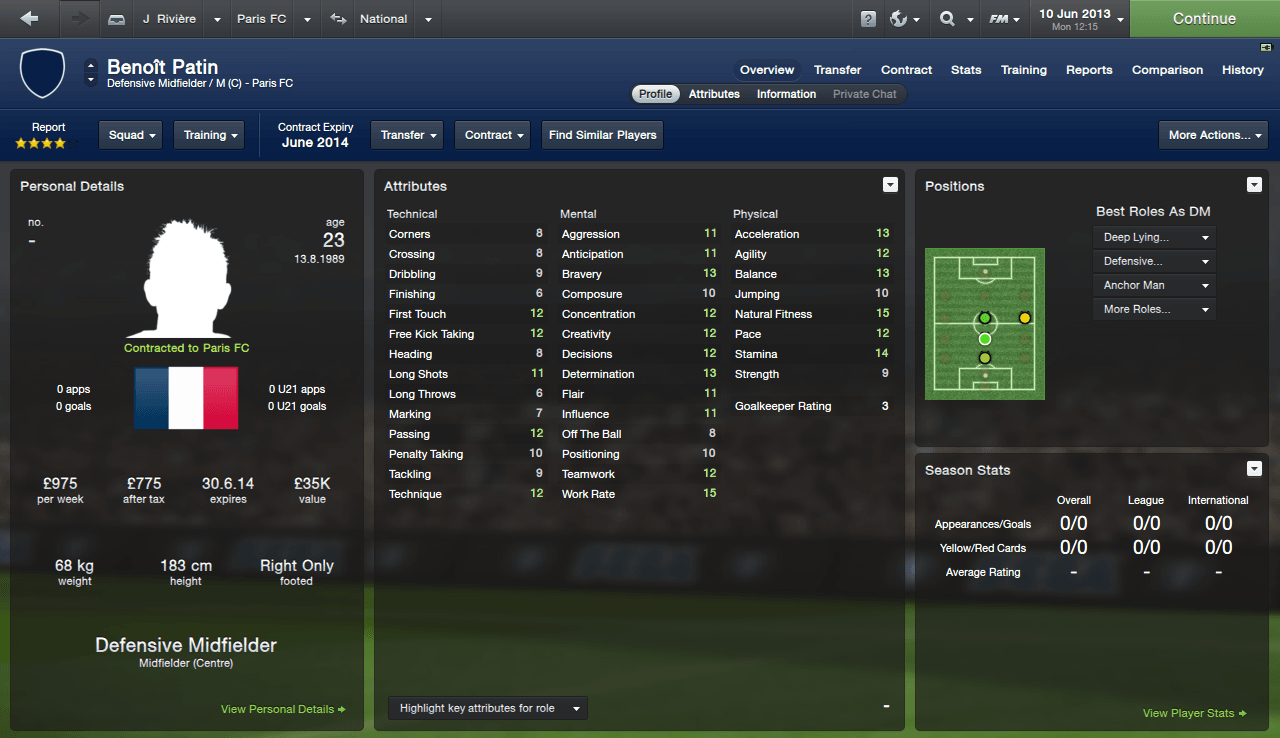 With the much higher quality in our league, I knew we would have to try be solid at the back and park the bus on some games. Defensive Midfielder Patin is young and talented and will go straight into the first team. In games that look completely out of our reach I may play 3 DM's so Patin will need to be on top form! 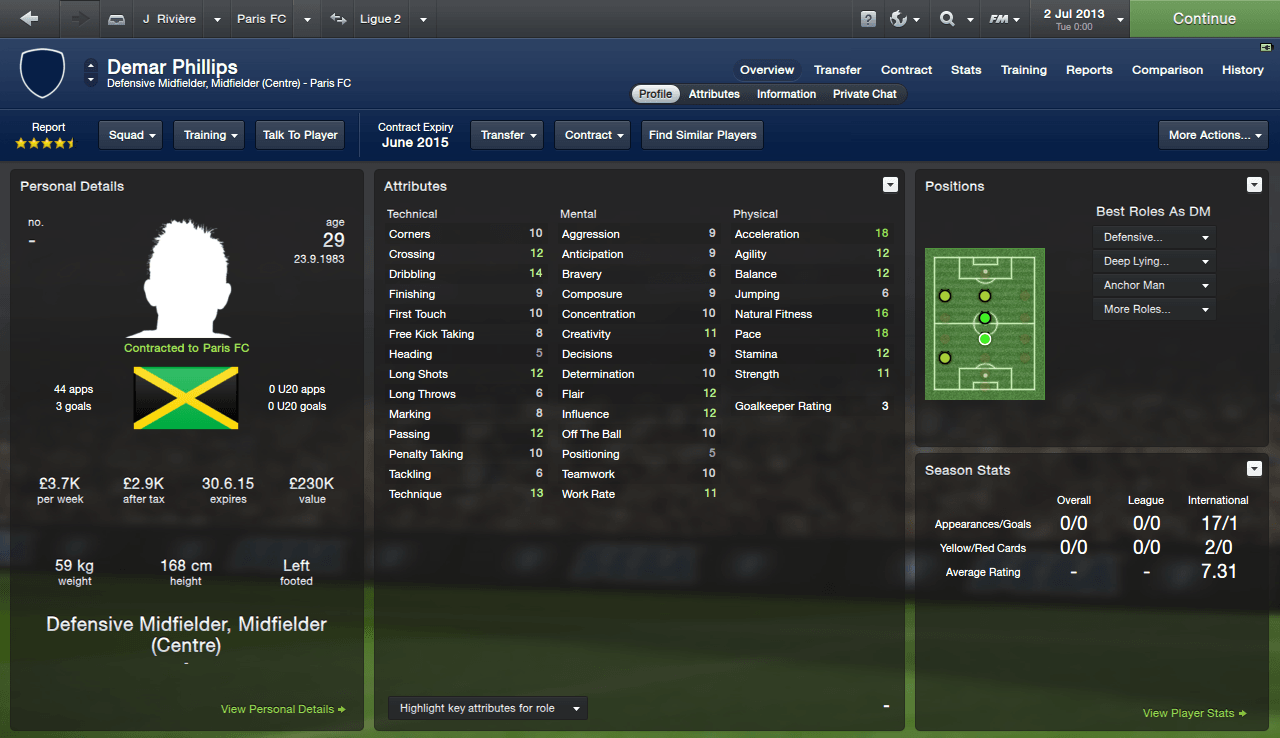 The second Defensive midfielder signed in this window, Demar has represented Jamaica on 44 occasions. Highly recommended by our scouting range, I decided to take him on. Let's hope he can build a successful partnership with Benoit Patin 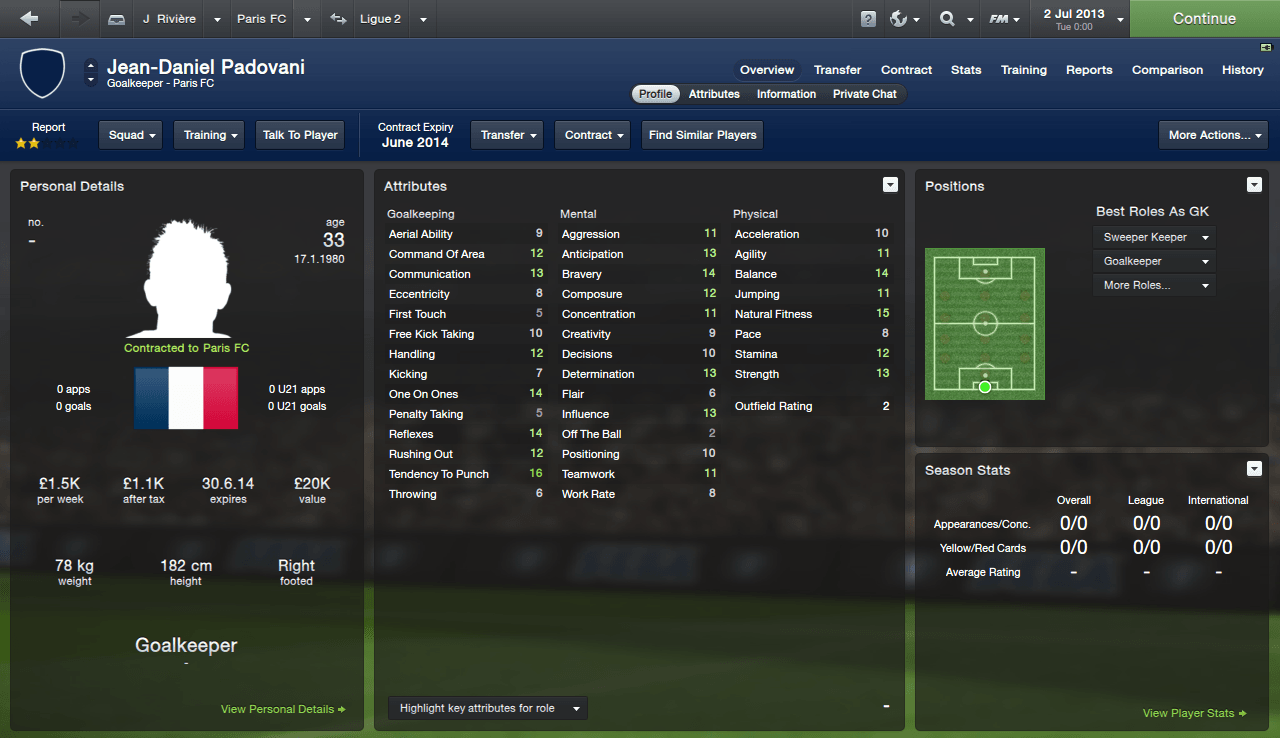 Although not the best looking keeper, Jean-Daniel will go into the first team without much competition, with young keeper Taieb still learning his trade. 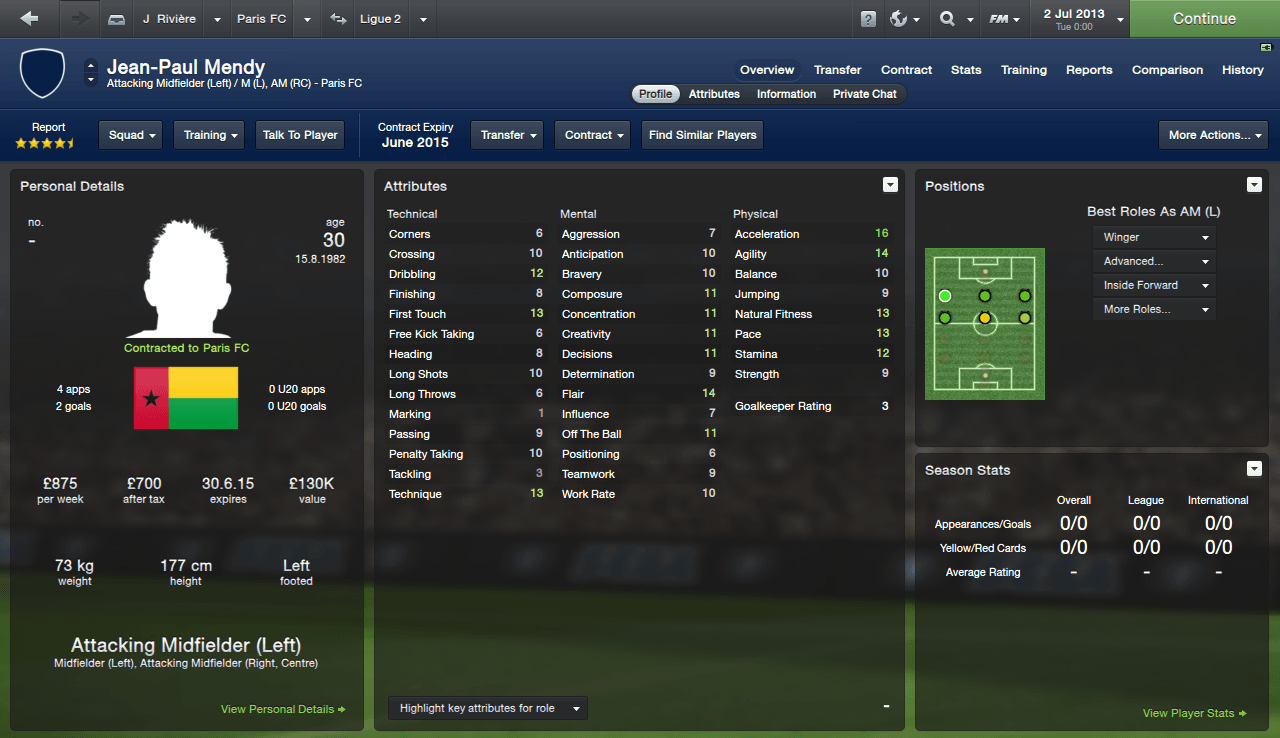 Experienced midfielder Jean-Paul Mendy is an exciting winger who will add some depth to the squad. We already have good players for this position so we will wait and see if Mendy can nail down his starting position.

Didnt take screenshots of others, will update tomorrow
Login to Quote

You are reading "Julien Rivière - The Grudge".