Chris
7 years
Would recommend Bruma who I think is at Sporting B, great potential - you could nurture him into the next Ronaldo or Figo! Also, great story depth and writing.
1
Login to Quote

Slid3Tackle
7 years
@Chris Thank you and I am using the last transfer updates so Bruma was brought by Galata on a fee of 10 mln euros..
Login to Quote

The first game of the month we faced Braga. I think that was pretty obvious that the game will end as a draw. We are not a team that scores lot of goals and Braga is a very solid tactical team, they are very good at defending so overall I am not disapointed or something like that by this draw.
The second game was my debute in the cup of Portugal.Because after this game we will face Benfica, I decided to risk and go with a team with eleven reserves.They strugled a little, but at the end we won in extra time thanks to a double by our young prospect Diego Rubio.
And now the real game! We had to face the best attack from the league, with almost double goals scored than we scored. I changed the startegy a little and we went in this game with a philosophy of couner-attack. We were clearly dominated: 10 shots and 4 on target for Benfica, 5 shots and 4 on target by us, 51% possesion by Benfica, 49% for us.
They had the kick off, did some passing and tried a long ball intercepted by Cedric Soares, Soares passes to Pizarro, from Pizarro to Mareque, Mareque with a perfect cross for Montero and he scores with a beafutiful volley. This was minute 1. We managed to keep our advantage till the end of the game.

Other things happened in October

I attended a match between FC Porto and Vit.Setubal to study Porto, to see how they play, but I didn't see a thing.They wew awful, they dominated the game but are very poor at finishing, from 11 shots only one on target, so they lost 2-0. I was very happy because they lost to be fair. 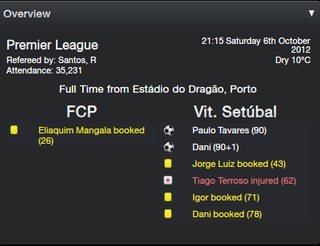 Another game I attented was Portugal against Israel.An very important game for us in the equation of qualification to the World Cup. It was a delighting match with a more than perfect display by Cristiano Ronaldo who managed to score 5 times in this game. 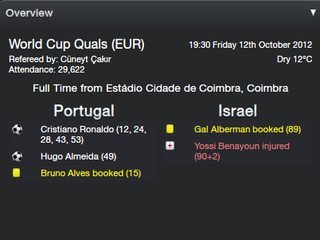 Also this month I recieved a call from David Hamilton telling me that he is in Romania an he has a big surprise for me. He is at a under 16 tournament and he found a player that has great potential and also will wake up some nice memoryes for me. His name is Ianis Hagi and he is 14 years old. He is the son of Gheorghe Hagi, I played with him at Barcelona.
For me Hagi is one of the greatest players there ever was, so I called him an told him I must have his son! We made the deal and the player will join us in the winter transfer period.

For those of you who never saw Hagi play or don't know who Hagi is, here is only one of a lot of beautiful goals he scored while we were at Barcelona:

The month started with a game away against P.Ferreira that we dominated and won without any problems.Diego Capel and Carillo get on the scorsheet with 2 beautiful actions, dribling and finishing like world class players.
Next came Gil Vicente.As it was expected a won, a double from Montero and a beautiful goal scored by Adrien with a long shot from around 25 meters.
In the cup, we again used our reserves and won against at extra time. Goal scored by Diogo Salomao.
In the last game we faced Arouca and again a win. Goal scorers were again Carillo and Capel. I am really glad that the players acomodetaed so well with my tactic and my instructions. This was the main idea, to surprise the opponents with our wings coming to finalize an action.
This was the best month till now, I am very glad with the performance of our players, so I asked the president to give the players a bonus for performing so well. He accepted and the players are now with a perfect morale.

Other things happened in November

As we can see at league standings, this is not FC Porto's year..they have also been eliminated from the cup at penalties by Benfica. 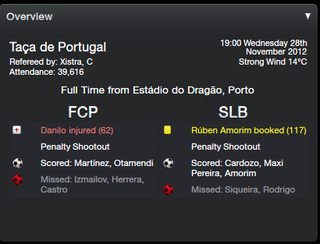 A big problem happened after the gam against Gil Vicente. One of our key players, Cedric Soares got injuried pretty bad so this means we have only Seitaridis who is a natural right back and Boulahruz who can partially play right back.

Also one of our playeres developed better than expected, he is Diogo Salomao and becam second option for left wing after Capel and in front of Jeffren. This means that Jeffren will be selled in the winter transfer period.

Our third match in Taça de Portugal, I used the reserves again, and again we won at extra time. It is just incredible how 3 times happened the same. Scorer Labyad.
Against Olhanense things went like usual, dominating the game an win without any problems. Scorer Montero with a double.
We could win against Guimaraes as well if Seitaridis wouldn't made a horror tackle and recieved a red card.
This month was also the draw for the League Cup Groups.

The first game of the League cup we faced P.Ferreira and won without a problem with a double by Diego Capel.

Other things happened in December

On the 1st December Marco Rojo got injuried in training pretty bad and he will be out for 5-6 weeks, after Cedric Soares, now Rojo.

I attended a game this month, Benfica against Academica, because I tought that it's gonna be a very closed game, and will se these teams at their best, but the final result was impresive, again an exceptional performance by Benfica. And again I felt so good because this team that scores a lot in every game, didn't manage to socre against us. 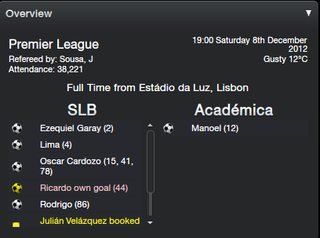 Also this month I saw something very interesting that reminded me what a grea player was Nuno gomes and how good it was to have him as a teammate. At 36 years old he is still a striker you should be afraid off.

The end of the month camed with bad news for us. Diego Capel got injuried in the game against Ferreira and will be out for 3 weeks.

MJK46
7 years
Good results so far. Keep it up.
Login to Quote

Slid3Tackle
7 years
thanks guys
@The Madridista yes, bad luck, he was one of our key players! the big problem is that he has a big role in this team being so offensive and having great tehnique, and we don't have any other tehnique and offensive central defender
Login to Quote

Justice
7 years
Epic story so far! Honestly, the best I've read in months since the Matthaus/Boreham/KuPS era!
I have a sneaky feeling that this story will be a big hit in the future!

Walter
7 years
Some quality updates mate, keep it up

Rablador
7 years
This is a brilliant story so far, as the others have said this has real potential and I look forward to whatever updates you will bring us in the future