MJK46
7 years
Congrats on the new contract and league win. In my save we play Sporting next in UCL.
Login to Quote

MJK46
7 years
I miss read it. My bad
Login to Quote 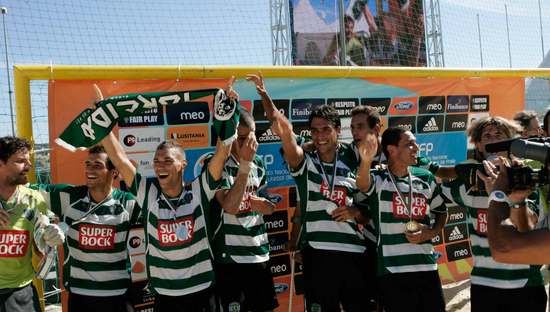 What a performance by our players, great football! We have some players that evolved so well this season, when we began the work, Carillo, Rubio and Labyad improved significantly, at the end of the season being clear that next season, this players will be key players. Our fans voted their player of the year, there was no surprise that the winenr was Andre Carillo. With 10 goals scored and 10 assists in 30 games, he was one of our top players, maybe he will become the next Figo!

Europe's top marksman was Cardozo. He is probably the main reason that we are not champions. He scored 39 times and gave 6 assists in 30 games, he was absoluteley briliant! But I am sure that one day, Rubio will become the next Cardozo and will score lots of goals for us.

The manager of the year award was of coure won by Jorge Jesus. I can't say anything but to congratulate him!

Premier league player of the year was certainly Oscar Cardozo! 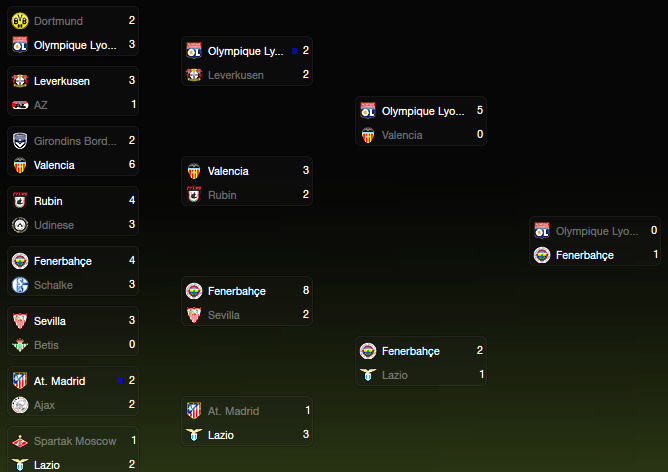 We can look back with much pride this season! The team was strong, great defending abilities, good attacking stuff, 2 cups won, second place in the league.
Now we begin again the hard work.We to search for good players, train hard, improve the tactics and maybe the staff and sadly, to sell some players because our boss has financial problems.
Who will leave? Who will arrive? Who will train better? We'll have to wait and see!
Login to Quote

Aaron
7 years
loving this story so far, keep it up lad! good season for you imo!
Login to Quote

Walter
7 years
Great update AAN, this story is really getting better each update

wellsy1498
7 years
Such a good story do far mate

What a great way to start the new season! A new trophy added to the trophyroom! We dominated the game and defeated Benfica once again! Diego Rubio with a hattrick...and he is only 20. We have such a great potential and future in this team!

Until 4 August this are the players that left the club: After a long meeting with mister president where we mostly talked about our financial problems, we both agreed at a solution: we will sell the players that have a high salary and are not very important to the team and one key player, I'll get to chose the player.
I decided that 1 central midfilder will leave, either Adrien or Andre Martins, maybe even Andre Santos, but for me he is our most important player, so only if we are forced. The reason for selling a central midfielder is that we have Labyad and Lanzini who have great potential, so will be no need to buy a new central midfielder.
So, after negotiating with more clubs, we managed to sell Adrien to Sunderland on a fee of 15 mln euros, a very good price if you ask me.

The other important players that left:

Both at the end of contract, on a free transfer. Very good young players with great potential.

After we had to sell Rinaudo, we needed a backup for Andre Santos, our defensive midfielder. This is why we spent 2,5 mln from the money recieved for Adrien, on this argentinien from Velez. This is a great deal for us, huge potential and little money.

Both returning after a season loan.

Gread performances so far, Diego Rubio was briliant so far, we also have Viola who played very well so probably Montero will be selled.He is the only player that can leave, and I think that no other player will be bought.
Login to Quote

Walter
7 years
Quite a brilliant win over Benfica, you may just be the number one team in Lisbon!

And some great signings like Martins Indi!
Login to Quote

Slid3Tackle
7 years
Thank you mate! It's true man, Martins Indi is a great player and also a great prospect.
Login to Quote

After winning the supercup we played 2 more friendlies. We faced Stuttgart and Hull. We played well against Sttutgart but we didn't managed to score, but against Hull everything went accordind to the plan. 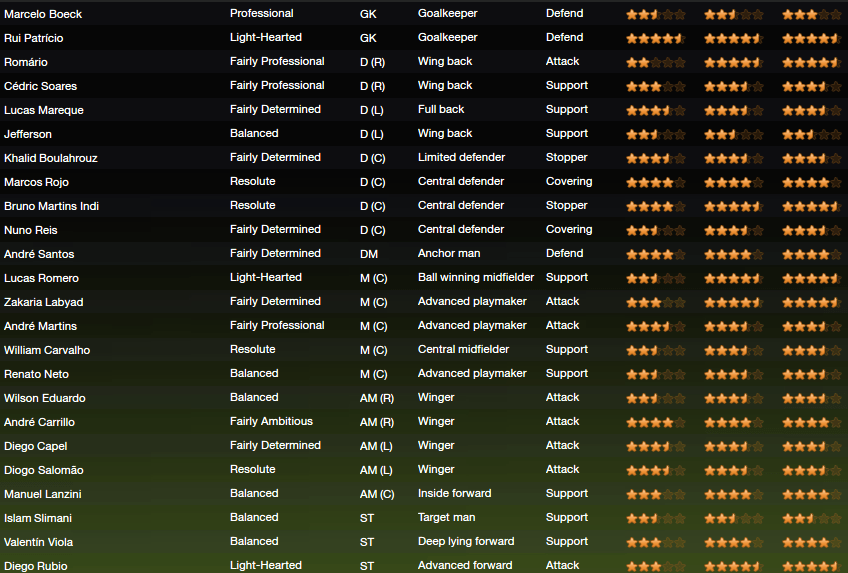 So this is the team we will start the new season.In the last day of transfer window we managed to send Montero on loan at Braga, they will pay his wage.

In the first game we facet Vit.Setubal. As expected, we dominated the game and won. The two goals scored by Rubio and one goal scored by Capel made the difference.
The second game we faced Benfica and once again we manage to defeat them. Andre Martins and Neto the goal scorers.Great solid performance by the rest of the players, if we keep playing like this and will not have bad luck with injuries, this can be our season!


Other things happened during preseason

Lucas Romero, the new arrived youngster got a bad injury, I hope he will came back from this without any problems.

Also, after the 2 league wins, I got my first award as a manager, I was declared the Manager of the month! I am so glad to recieve this award!

The most important transfers around the World

Some huge amount of money were invested by clubs in transfers, Real Madrid, the team we will have to face in Champions League was one of the biggest spenders. 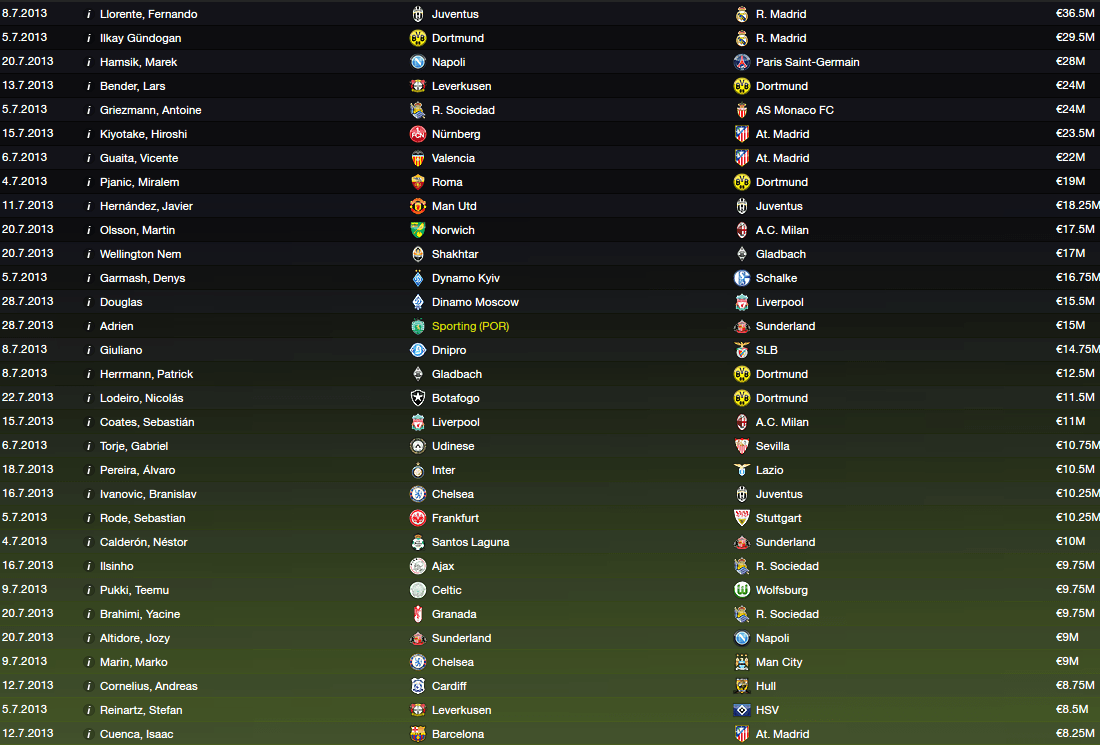 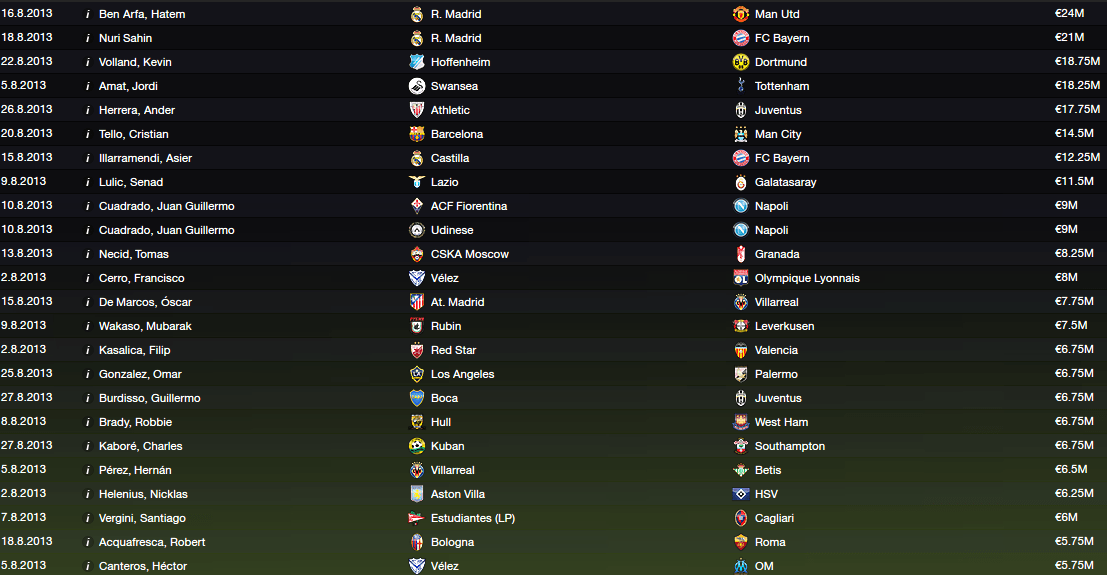 So what can I do against the odds?? 4 players inujried this month, and almost strategically, our 2 defensive midfielders and our 2 right backs. Against smaller teams you can win with the reserves, but against a team like Porto, even they aren't at their top form, you just can't do anything.

It was my debut as a manager in Champions League and also the debut of many young players we have. Without experience we managed to be better than Inter, higher possesion and ocasions, but we missed very much. Overall a great result!


Other things happened in September

Juventus won SuperCup of Europe! I think everybody expected this and Fener didn't managed to do a surprise. 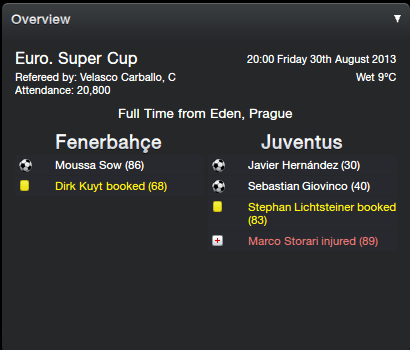 3 players injuried this month, adding the player that got injuried in preseason we have 4 big losses, the two right backs we have and the two defensive midfielder we have.

This month we played 2 matches in the league. First we faced Academica and won 2-0.Andre Martins and Carillo with 2 beautiful goals ensured our victory after a 60% possesion for our team.
The second game was a joy to watch. Splendid performances with 4 different scorers: Mareque, Carillo, Rubio and Capel. 15 shots&10 on target.67% possesion.

Our second game in Champions League was a good perforance.We hat 15 shots and 8 in target with 57% possesion.Sadly we made some mistakes in the defensive compartment and ended 2-2. Our second draw.
Third game in Champions League was against Real Madrid. I returned to the Bernabeu stadium..what I felt I can't explain, so much memories,a lot of great moments I had in this stadium...before the beginig of the game, when I walked into the pitch to go at the bench I couldn't believe, the people were all screaming from their hearts: "Figo!Figo!Figo!" what a great moment for me.
The performance was really good but they have to many briliant players and we lost.

The first game of the season in Taça de Portugal, Porto against Sporting. What a great match to see as a suporter and it really was a close game and very spectacular. We managed to get the win thanks to a goal scored by Carillo.


Other things happened in October

Two more injuries this month, this things just keep happening so I decided. In the winter transfer window I will cancel the contracts of all fitness coaches and physios.

After all the injury of Rojo I decided to give a chance to a 16 years old youngster from the youth team, his name is Filipe. I was surprised ho well he palyed, in 3 games he got an overall rating of 7.20.