The month started with a game against Guimaraes. This game had everything, in the center of attention being Cedric Soares. First he missed a penalty, then Viola scored a double. After the double another penalty was awarded for our team, this time, Cedric scored, but after 10 minutes the same Cedric made a horrible tackle so he get a red card.
In the second game we played in the League this month, we faced Arouca. An easy game was predicted..and so it was. The difference was clear and we won withou problems.

Again, pretty easy game, we were clearly superiors. Diego Rubio with a double and Carillo ensured our victory. 69% possesion, 17 shots, 12 on target.

We are facing Real Madrid again.We dominated the game, we had a goal goal disallowed, I would say eronate, and real scored after a penalty that never was. At the end of the game I asked for a report of the supervisor about the refree. Even the supervisor said that it was a poor perforamnce by the refree, but we lost and this is it.
We also played against Inter this month and again we repeated the performance against Real, but this time no refree involved. Our first win in Chapions League...such a brilliand feeling.
Carillo and Rubio the scorers after 54% possesion, 13 shots and 6 on target.
If we defeat Rubin in the last game we can qualify for Champions League next stage, a performance that no one expected after we drawed Real and Inter.

Other things happened in November

This month I decided to take a closer look at my youth team and was surprised.They are first place in the league with great performances by the players I already know, like Ianis Hagi, He plays central midfielder, in 11 games he has 7 assists and 3 goals scored.
But I also discovered a new future star Jose Postiga, in eleven games he scored 15 games and has 7 assists, just incredible. 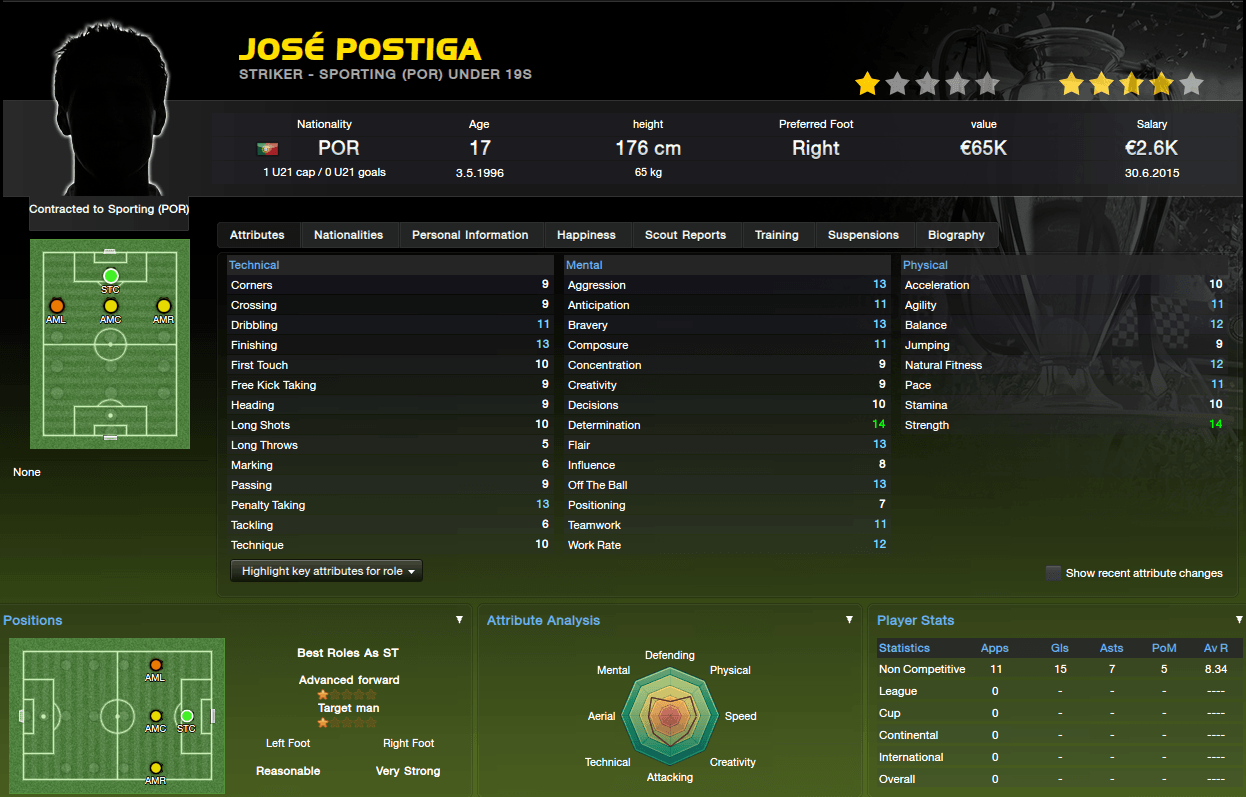 Another player that had some great performances so far was Diego Rubio, 16 goals scored in 13 games, and 1 assist, also helped him increase his attributes very well.

mitacfdc
7 years
Good job,you brought out the best of your players.Lanzini may be next Di Maria
Login to Quote

Walter
7 years
Nice update, I tried to get Postiga on loan once, he looks a beast!
Login to Quote

Slid3Tackle
7 years
@mitacfdc - Thanks mate! Lanzini,yes, he can be, but I am using him as a CM, not as an AM
@Walter - Thank you, I think that Postiga will soon make his debute for the first team, because the performance of Viola has been particulary pleasing.
Login to Quote

This month we faced Maritimo and Rio Ave. If the first game was a poor one, and we won thanks to an own goal, the second game was a joy to be watched, beautiful performance by our players with Andre Martins, Mareque, Rubio and Labyad the scorers.

In Taça de Portugal we had to face Arouca.The difference was clear: 58% possesion, 12 shots, but only 4 on target. Labyad and eduardo the scorers.

Our last game in the group stage, it was a hard game. We went to Kazan, there the "white hell" was expecting us. -10 celsius degrees, the pitch covered in snow and a sintetic grass. The playeres were freezing before the game started, we are not used to this situation! Thanks to a great execution by Viola we managed to score and the great performance by the defenders made us the winners.
We qualifyed for the next round! What a great performance! Before the group started, my toughts were that is we qualify for Europa League it would be great.

This month also was the draw for the League Cup groups. 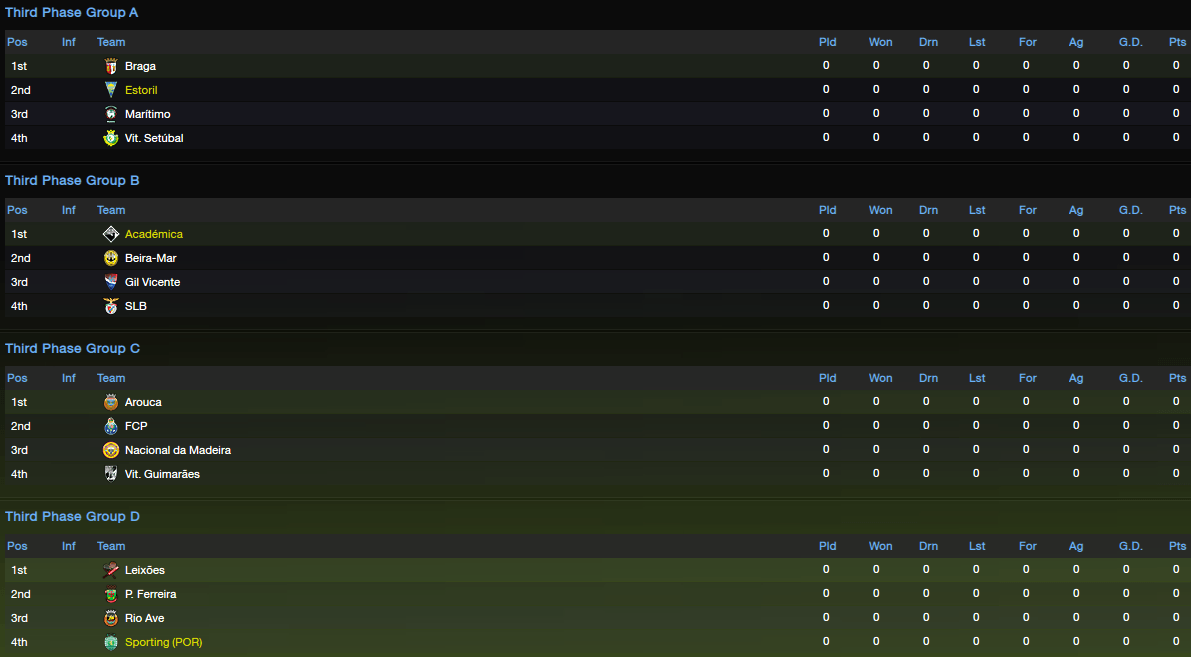 I decided that in this 3 games, I will use my reserves and 3 players from the youth team: Filipe, Hagi and Postiga.
First we faced Rio Ave, it was teh debut at the first team for the 15 years old Hagi and for Postiga. Postiga also scored the only goal of the game.


Other things happened in December

This month was teh draw for teh Wold Cup 2014 which will take place in Brazil, some interesting groups!
I had 3 dreams in my life: to manage Sporting, To manage Real Madrid and to be at a World Cup as a manager of a country. One of them already is reallity! 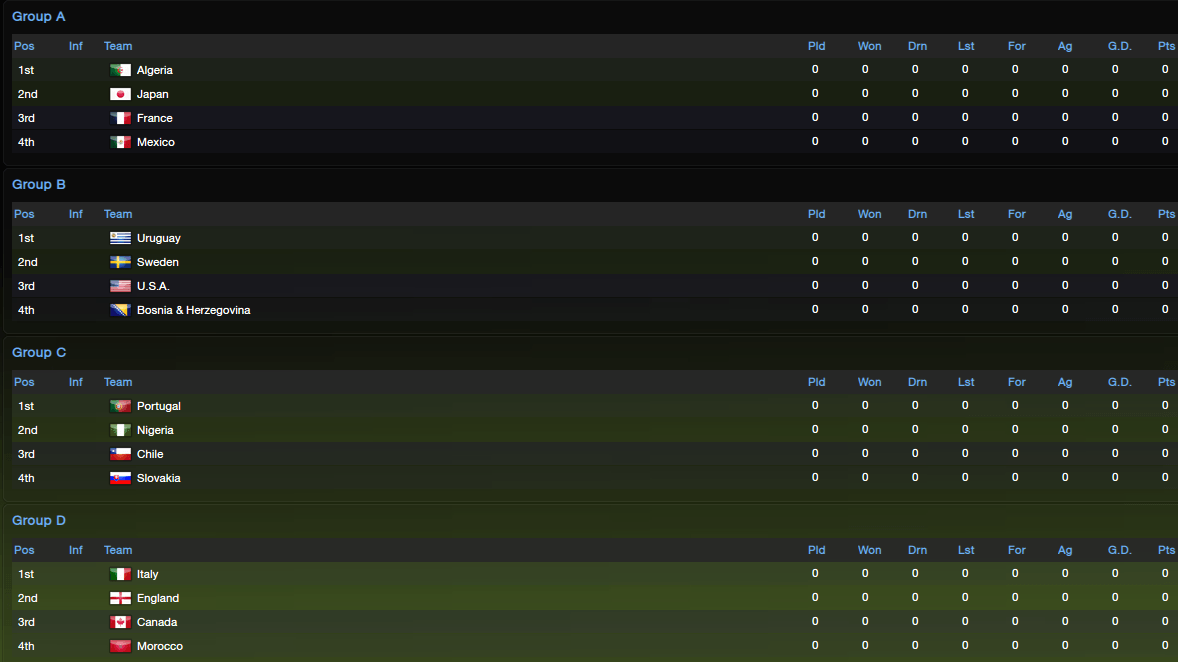 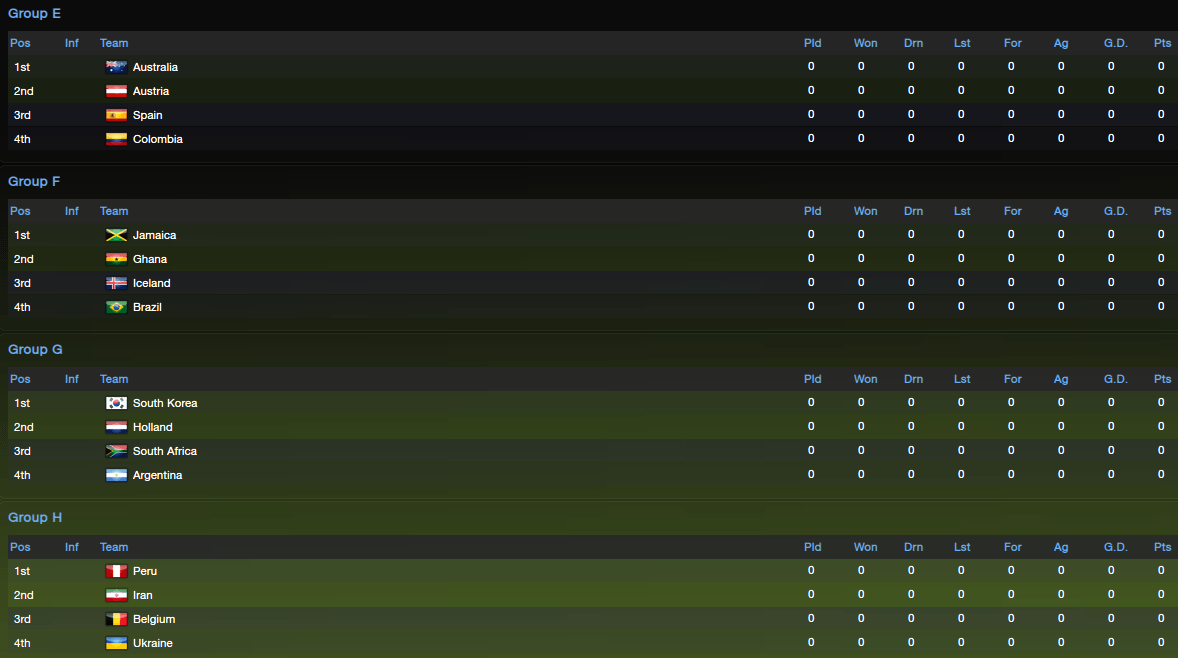 The draw for Champions League I think it gives us no chance for qualifying to the negt round.

Also a player returned after a 2 season loan at Flamengo, Elias. He is a great central midfielder, but we will ahve to sell him, his wage of 2 mln euros/season is too much for us.

This month we played 3 matches in the premier league.
First we faced Braga. We had 57% possesion, 14 shots and only 4 on target.In this game we really lacked at finishing, but overall, it is not a bad result if you think that Braga several years ago played the Europa League final.
Then we faced Vit.Setubal..an easy game.I don't have much to say about this game, all is reflected by the score. A double by Rubio and a goal by Martins ensured our victory.
The the big derby of Lisbon, Sporting CP - Benfica! What a great performance by our players, they really controlled the entire game so I didn't have any fears.

Leixoes and Ferreira were the opponents. As I sad after the draw, the matches from the League Cup group will be played by reserves and youth players. We won all the games, the youth players were briliant, the young player I discovered last month at the youth team scored 4 times in this 3 games, Jose Postiga. 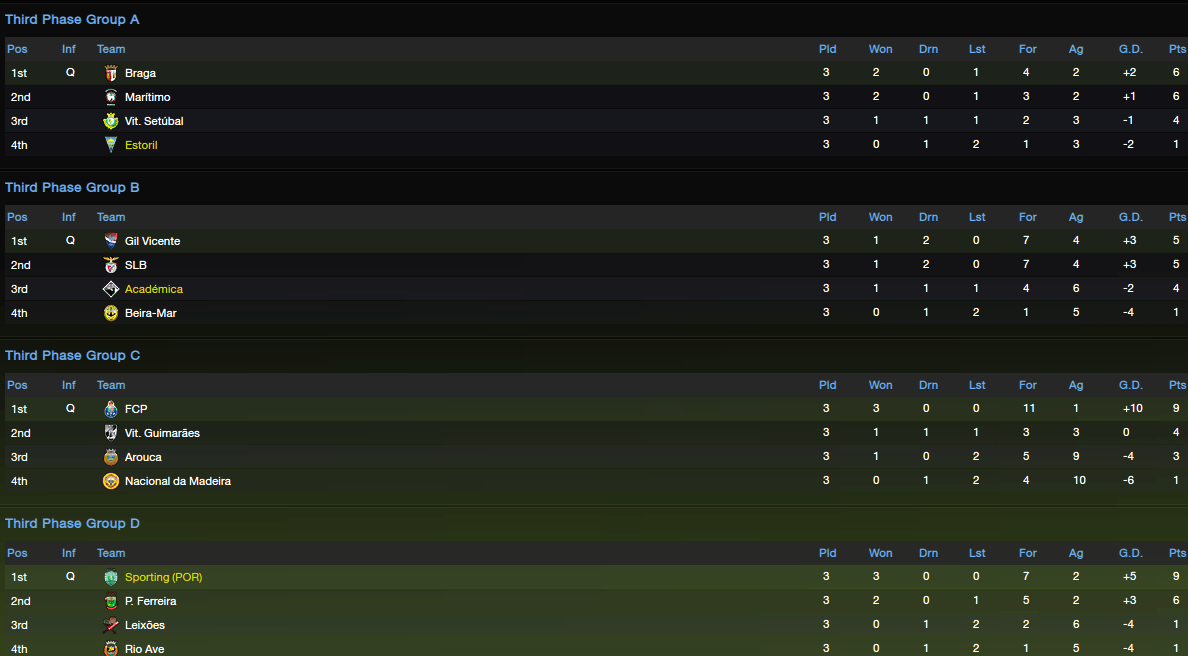 I just can't understand how Benfica didn't manage to qualify in the next round.

A game full of goals and spectacle against Olhanense. The reason we recieved 2 goals is that the goalkeeper was Marcelo and he had a poor performance.
The it camed the first leg of the Cup semi-finals where again, we had to play Benfica. We won the game in 93 minute, by a goal scored by Lanzini,a great game!
Sadly, in this game Mareque got ijuried so I had to bring a left back to play while he is injuried.


Other things happened in January

In the date of second January I invited my fitness coaches and my physios to my office. They walked in, I gave them a cup of coffe and start talking about the preparation. I told then that things like this can't happen anymore, we have too many injuried players and I think that it's their fault. Our head physio got angry when I said that they are all fired an throw the cup of coffe at me! He grabed me by my tie anh he said that he is going to kill me if I fire him! He said that he has relations and will "beat the crap out of me"! Luckly the guys from the security were near the room and quickly camed and imobilised him! I am going to sue him and try to obtain an restriction order!

The golden ball winner was again Messi, just like the last year.

I sent my scouts looking after players that willend their contracts this summer. They came back with many reports, but the only player that really make me want him was Brice Dja Djedje.

We made a great deal with Elias, selling him on a 15 mln euros fee is a great peace of business.

As I said earlier, Mareque got injuried so we need a new left back. I decided that we will go for a loan and we will see in the summer if Mareque will remain the first option or we will buy another left back.
We signed on loan Butner from Manchester United. The reason why he was the chosen one, is that he is a very ofensive left back, just what we need.

Walter
7 years
Some great pieces of business there

Doing well in the league table, but what are Academica doing up there?!

Slid3Tackle
7 years
I don't know mate, I don't know how they've got there and how they are keeping up..:))
Login to Quote

Jack
7 years
Buttner was poor for me for Accrington but I do hope he performs for you, nice update
Login to Quote

Slid3Tackle
7 years
@Jack thank you and yes, Butner is not a great player, but as a backup on a 6 months loan it's ok..
Login to Quote

In the first game of the month we had to play against Leixoes, the last place from the league. I was affraid that the players will think that they have won the game before it starts, but the match went very good.Capel, Soares and Rubio the scorrers.
Against Olhanense,Estoril and Ferreira some poor performances...but a win is a win and I will always take a win than the great performances.
We dominated Beira-Mar, 62% possesion, 15 shots ant 7 on target. Scorers: Salomao and Rubio.
Against Porto I decided to use the reserves because the big game against Chelsea was only 2 day away.I don't know how they managed to play that good with 15 years old Hagi an assist and a goal and Postiga a goal.After this game I can say: We have future!

Agains Chelsea happened exactly what was predicted. They dominated us, even with only 10 players because Lampard has been sent off in minute 19. Willian the scorer.

9 games before the end of the season and we are already qualified for Europa League and 9 points in front of the second place Benfica, great season so far!
Login to Quote

Walter
7 years
Great work in the league - keep it going 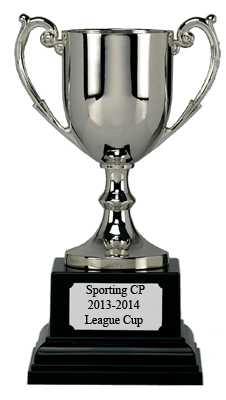 6 games in the league this month : 1 draw, 1 defeat and 4 wins.
We made a draw against Guimaraes because the players were down with their morale after Chelsea defeated us and eliminated us from Champions League.
We had 4 wins this month: against Gil Vicente, Arouca, Rio Ave and Maritimo. the most important was against Maritimo, now we have 5 points advantage in front of Benfica with 2 games till the end of the season. We are very close to being champions!

After we lost the match we played home against Chelsea, we lost and the away match. I am not angry with boys, I praised them for playing so far in Champions League and told them that I am proud of them!

After defeating Braga in the semi finals, we faced Porto in the final at penlaty kicks!
Surprisingly, the League Cup goalscorer was Postiga, who played only the 3 games from the groups and scored 5 goals.
The second cup in a row! Great performances from our players.

Other things happened in march and April

I looked at my loaned out players statistics and couldn't belive what I saw. Seems like Montero is having a great season at Braga.In 35 games he scored 24 goals.

And this is what I call a captain:

Verdinho
7 years
Awesome story here with my beloved Sporting. Hopefully this is the year we win the title.

P.S. Give it one more year and Andre Carrillo will become one of the most sought-after players in the world. Keep it up