Slid3Tackle
8 years
@Justice Thank you very much mate, your comment make me wanna keep updating this story a long time from now
@Walter thanks mate, I'm looking forward to see your story
@Rablador thank you very much
Login to Quote

"OK, look guys,if you lose a game this month, or you will make a lot of draws, I will understand perfectly! This is incredible what happens, how could the league bosses program us 8 games in 30 days?? But guys, we have started something togheter and we will end it as a team! I have faith in you, give your best this month!" - this is how we began this month with a team meeting

This month we played 4 games in the league. The first 2 games we won without any problems, but the second 2 we made 2 draws, it was clearly that the players are very tired, but I am still glad that we didn't lose against Porto with the bad condition we had.
After this month for me was clear, we need a top class striker! just let's take a look at Benfica, they are first place after this month, 3 points in front of us. Their striker, Oscar Cardozo scored 31 goals in 17 games, how is that even possible? and our striker just 11...I mean even Nuno Gomes, at 36 has scored more times than Montero.

In the first game we won against Chaves with a goal scored by David Pizarro, to be true, Chaves is a weak side, we were lucky to draw them.
The second game, was the first leg of the semifinal when we played away. Before the game I had a bad feeling that this will be the first defeat of the season, because players were exhausted, but they managed to win.

We managed to qualify in the next round from the groups of the League cup after 2 wins and 1 draw.
Overall, I am proud of my players after this month!


Other things happened in January

At 1st of January we found out who won the World Golden Ball award, it was no surprise.

The 3 youngsters joined us, Ianis Hagi, Romario and Mario Lucas. Ianis at 14 years old was sent to play for the youth team, Mario Lucas was sent on loan at Fatima and Romario remained with the team as a bakcup because Seitaridis wasan't playing good at all.
At the end of january the fatigue sait it's word and we lost another player, we have so many injuried players, and so much games to play...I feel like here we are loosing the League title.

But the good news of this month is that we signed two young players, very good now and with great perspective of becoming top class players. We signed them on precontract, thei will join us in the summer. These are the players:

Walter
8 years
Doing great in the league. Some quality signings, how is the financial situation?
Login to Quote

Slid3Tackle
8 years
It is not the best..but if we manage to qualify in the Champions League Groups and sell 2 or 3 players that we don't need we will be in a great financial position!
Login to Quote

The first game of the month was in 10 february, we had a well deserved 10 days without playing a game, because there were international matches. After 8 matches in january this break came very well.
After this break they showed real profesionalism and came back with a great performance, scoring 5 times against Setubal. Hattrick by Carillo and double by Montero.
Then we faced Belenenses and Estoril and won both games with the same result 2-1. Diego Rubio and Islam Slimani scored against Belenenses and again Slimani with a double against Estoril.

In the League Cup semifinals we faced Braga. A solid performance by our players being very motivated by the dream of playing a cup final. Fredy montero and Cedric Soares teh scorers.

Other things happened in February

The only notable thing was tha injury of Labyad in the game against Belenenses. We have so much bad luck with this injuries!

MJK46
8 years
Keep up the hard work. You have an impressive run of games at the moment.
Login to Quote

Slid3Tackle
8 years
Yes...we didn't lose a game all season and we are still on second place! Benfica are just playing perfect football!
Login to Quote

The first defeat of the season happened, I can't say it wasn't expect, we have a lot of injuried players...but this is football! Montero scored a double against Braga, but it wasn't enough.
The other 3 games went well, we won thanks to grea performances by Diogo Salomao, who scored 5 times in this 3 games.
At the end of the month the title seems to be away from us, but at least we managed to qualify for Europa League and this means that the objective imposed by mister president was acomplished.

Other things happened in March

Of course..how do you think that Diogo Salomao played the last 3 games in the first lineup? yes, Diego Capel got injuried! I am sick of all this injuries!

At leas this injury helped Diogo Salomao get his first caps for on of his nationalities he was able to play.He also scored a goal! I think if he waited a couple of months I could help him made his debut for Portugal..but he chose Guinea-Bissau.

This month the board organized a new intake of youth players. i am really glad that between all those players, we could fine these 3 youngsters with great potential:

The month ended as it began, I could make a bet this will happen, he was playing to good!!! 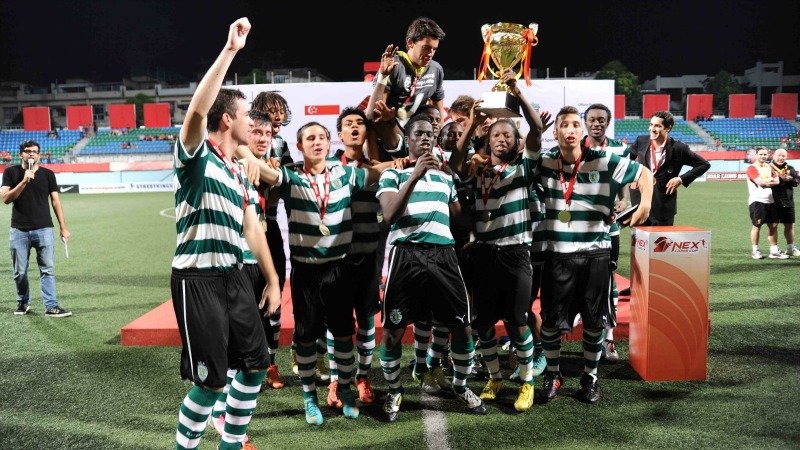 Yes! We have done it! We managed to defeat Benfica in the final with the help of two beautiful goals scored bt Diego Capel and Labyad. I am proud of my boys! The have done it, a very young team an we won a trophy, probably for the most of the players this is their first trophy as a pro and winning this trophy means very much to them!
Diego Capel also managed to do a competition record with his goal.

I don't have much to say, with this 3 draws we made this month in the league it's clear that we don't have any chance at winning it, Benfica will be the new champions, but we have a very young team, they have time to win the league next years..

After a great performance by our players in the second leg of the Taça de Portugal semifinal, we managed to qualify in the final where we will face once again Benfica!


Other things happened in April

Of course, no month passes without a new injury! This time Pizarro feld to the duty!

One day this month I recieved a mail:
"Hello mister Figo. I am Bojan Krkic(my chief scout) and I sent you this mail to see what player do you have in your hands! I am at a tournaments between youth national teams.
P.S.: Like father, Like son!"

PS - What skin do you use? Its quite beautiful!
Login to Quote

Slid3Tackle
8 years
@ Nathaniel the skin is called scorpio v2 and thank you.
@ TheFMProject thanks mate!
Login to Quote

Last 3 games, 3 wins but this wasn't enugh, we lost the title at 1 point distance, but it's still a loss. The players were a little disapointed but I told them to look at the good side, we are a very young team, we won a cup already and we will play another final this season. The second place in teh league isn't bad at all, if we concentrate better next season, we can win it!

Other things happened in May

My contract was ending this summer, so I recived a present from the board, by a new contract and a bigger wage! The president said that he is very glad with my performances and can't wait to see the team playing in Champions League, the problem is that he has some financial problems so he asked me if I can make in this transfer window around 20-30 million euros from selling players.
I hope that this problems will pe solved and will be no need to sell players.

The only thing that remains now is to play Taça de Portugal final and get ready for the new season!
Login to Quote