The words of a Champion!


The world of football has changed so much since my retirement, It looks so much different now. there are teams like Manchester City, PSG and recently Monaco who can buy everyone they want, they will spend hundreads of millions for a player if they really want that player. When I played football there wasan't so much money, only teams like Real Madrid or other teams with a lot of performances could spend millions on players. Even I was bought in 2000 for 60 mln euros, but I fell that then we played football with passion, with our hearts, we enjoyed being on the field...anyway I miss being there on the pitch, I miss the smell of grass, this is what made me say I want to go back! so I ended getting the FIFA pro license for managers. 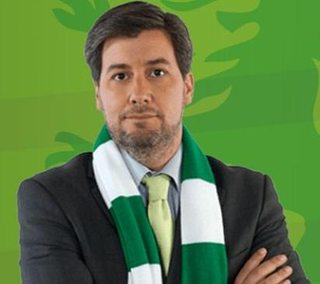 After 3 years after my retirement I recived a phone call from someone, at that poit I didn't know who was. I answered and find out that it was Bruno de Carvalho, the president of Sporting CP, the team I love the most, the club where I started playing football. He invited me at dinner because he has something to propose me.
I was happy, maybe now I will get a chance to do something for the club that made me who I am. I went to a sore, bought a new black suit,a new white shirt, I was practically acting like a young man who wants to impress at an interview.
The meeting went well, I sincerly didn't know that they make so great food at that restaurant, he told me that he had enough of this things, no performances year after year, not even qualifying to Europa League so he got angry and fired Leonardo Jardim (the manager) and all his staff. He wants to end the dominance of Porto and Benfica, he wants a new team and the only guy he could think at achieving his dreams was me.So next day we met at his office and signed the contract. 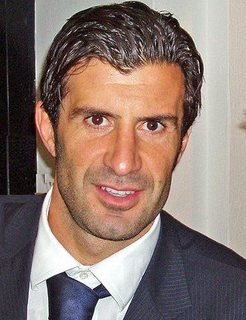 I am Luís Figo, the former Ballon d'Or and FIFA World Player of the Year, I am the new manager of Sporting CP and I will end the dominance of Porto and Benfica in Portugal!
Login to Quote

EdenHazard17
8 years
I reccomended this team!! Looking forward to this! Good Luck
1
Login to Quote


So I began my first day as a manager of Sporting CP with a team meeting, I wanted to hear from everybody what they want from football, what they like most, offensive or defensive football and of course if someone wants to leave, I won't be keeping anyone here by force. Everything went well and I felt that only after a meeting we are united, they respect me, I rescpect them, I felt this is going to be a great experience.


In this training session I saw what are the good things and the bad things, what players I have and I decided what tactic I am gonna use, it will be 4-1-2-2-1. Strangely we have 4 left backs and oly one right back. My problem is that I need a very offensive left back, and none of this 4 was what I need, so 3 of them will be leaving and I will bring a new left back. After this training session I also observed we need a right back and a central midfielder. 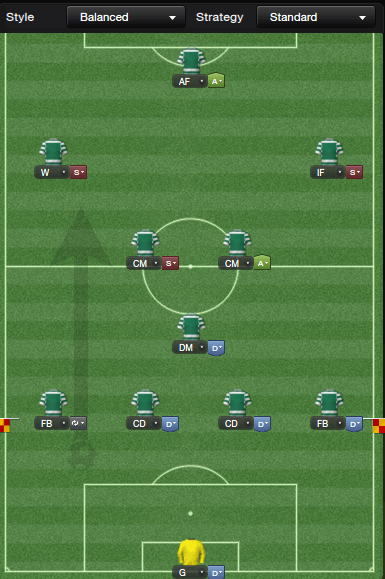 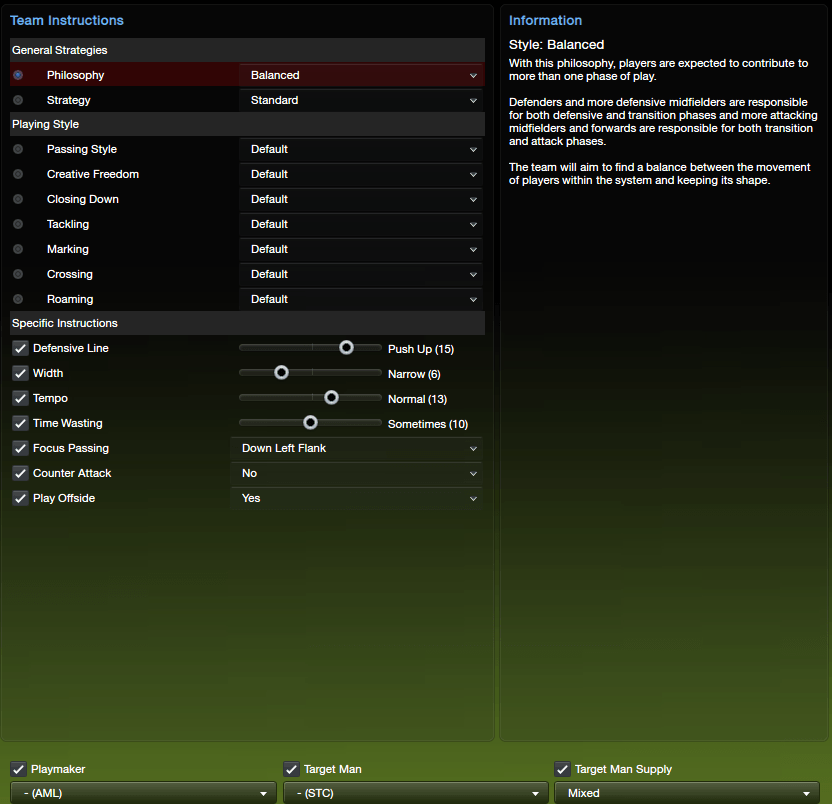 And every player has his own instructions, if you are interested in a specific position's instruction, you can leave a comment and I will show you.

Like I said earlier, the president got very angry and canceled the contracts of all staff so I made the director of football Paolo Futre (the best in Portugal) and my assistant coach Leonel Pontes, he is also the assistant coach of Portugal national team.This two guys signed the rest of the staff, it looks like this: 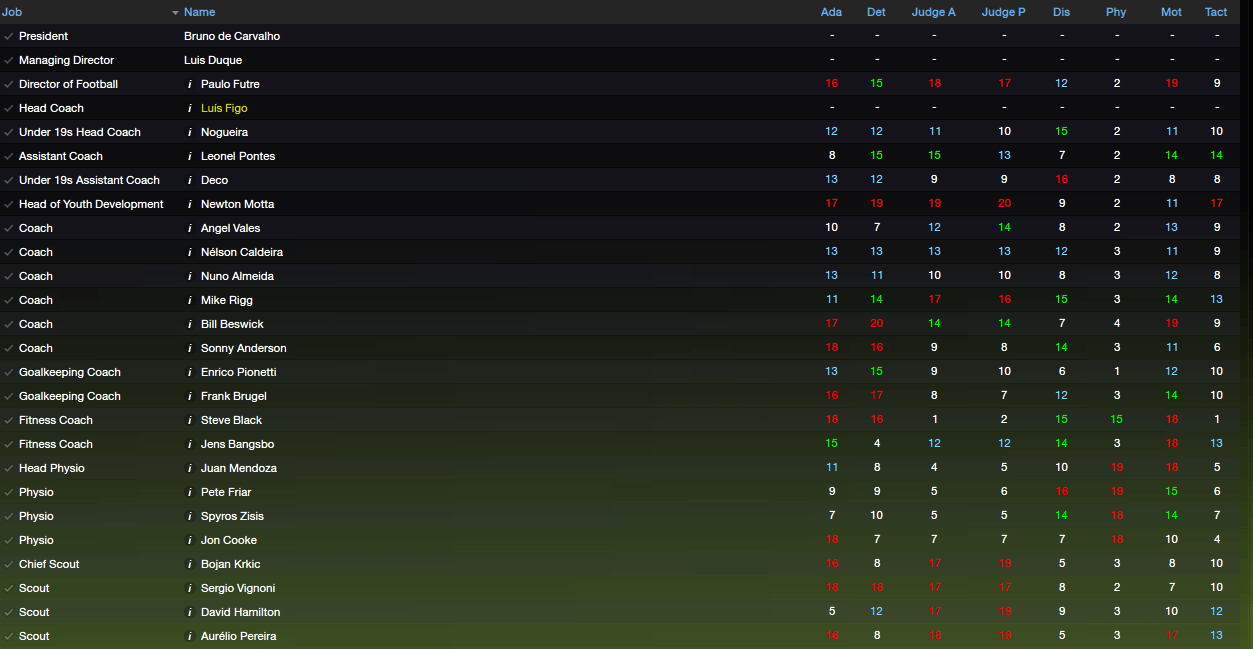 I only insisted that Deco to be part of my staff, he is the assistant manager of U19 team.
Login to Quote


As I said earlier, we need a very good left back with attacking attributes, a back-up for our right back Cedric Soares and a central midfielder who can be rotated with Adrien, Andre Martins and Labyad. The bigest problem I had was the budget...we had a tiny budget so I decided to send my scouts looking after free agents, there must be some godd players.
As day passed my scouts came with full reports about players and we start negotiating. After some sleepless nights and day full of work we managed to sign this players:

In last season he played in Ligue 1, for FC Lorient. He is a good crosser, dribbler and passer. He has good tehnique and speed. He's exactly the left back I needed for my strategy.

I would say that he is a good back up, he comes with a lot of experience, he can teach our young players how to develope better and also when we will need him,I am sure he will not disapoint us.

A great player, very good playmaker, he played in his career at the highest level: Inter, Udinese, Roma and Manchester City. He has great experience and I am sure that he will help us
achieve our objective.

My scouts also found 2 youngsters, 2 players with very good potential that will becom free agents in the winter so we decided to sign them on a precontract.They will join us in the winter transfer period.

Our first first friendly was a tough one.We played away at Fulham, but we dominated the game and we won with a goal scored by Diego Rubio.
In the second friendly I can't explain what happened, we didn't play npthing, we were awkward and lost the game after a poor performance.
In the second game we had a solid performance, 3-0 win with Sporting B, we played well.
In the last friendly, Fredy Montero with a double ensured our victory, all around performance was solid.
I am contained with the pre season, I would say we are ready for the season and will be up there at the end of the season.


This are the players which remained at the club, this is our sqaud for this season: 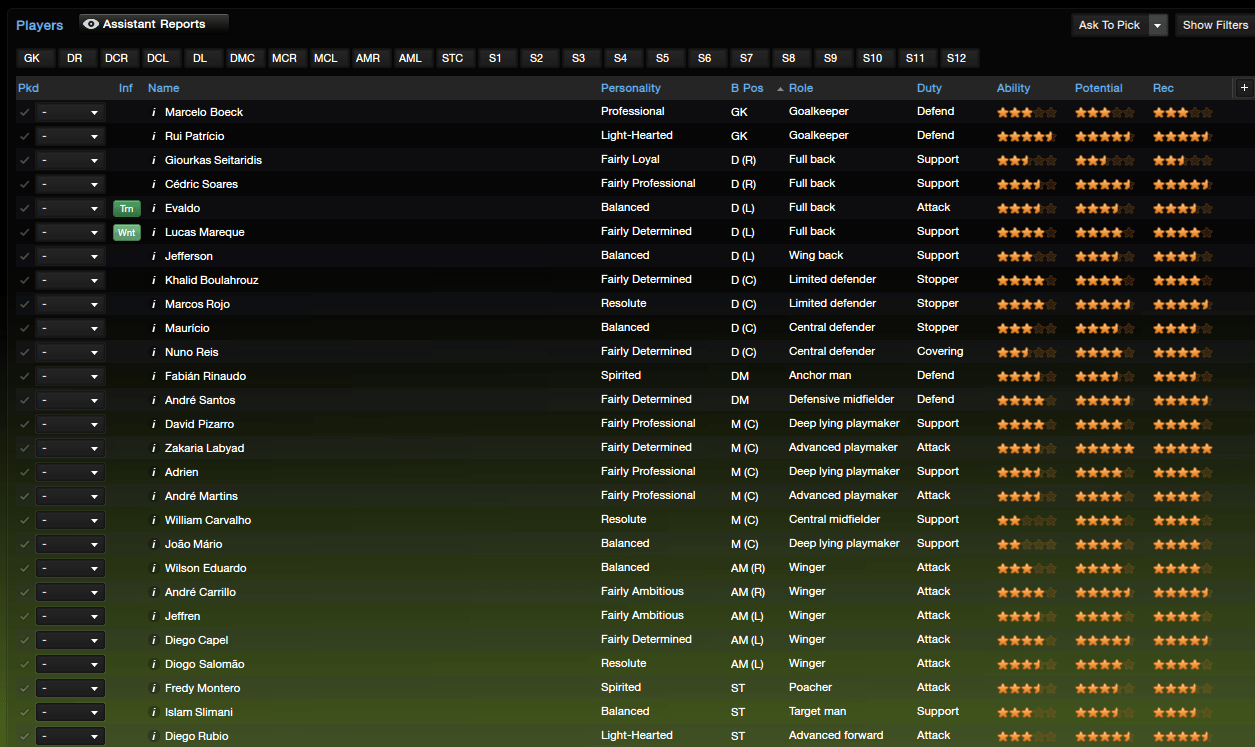 Some vey good players like: Rui patricio, Mareque,Boulahruz,Andre Santos,Diego Capel and Montero.
And some great prospects for the future like: Cedric Soares, Marcos Rojo, Labyad, Carillo and Diego Rubio.
Login to Quote

AlexTHFC
8 years
A nice start here, good luck with Sporting, and try not to let any of your youngsters go!

MJK46
8 years
Nice story. Will give this a follow since I enjoy reading stories from the smaller leagues. Have you found your Ronaldo yet?
Login to Quote

Poachy
8 years
Just curious what skin it is in the story? looks awesome
Login to Quote

Slid3Tackle
8 years
@BayernAmerica I want to find my new Figo! not Ronaldo

Cheers, will have to see if I can locate it
Login to Quote

YES, I am so proud of my players!We defeated FC Porto in the first game of the season thanks to a great game made by Fredy Montero! A double from Montero and a goal scored by Carillo.
The game was very equilibrated: we had 7 shots and 6 on target and Porto 8 shots and 5 on target, 51% possesion for us and 49% for Porto. Diego Capel and Mareque also played very well this game, getting a rating of 8.2 both.

Second game of the season: Away at Rio Ave. The win against FC Porto gave our players great momentum and motivation and they played very well against Rio Ave. A double by Diego Capel who was also man of the match. Again mareque with a grea performance, being rated 8.3 at the end of the game.

Before the end of the transfer period we loaned some of our youngsters out hoping they will come back better and more experienced. We also selled Leandro Grimi(left back) to APOEL for a fee of 500 k euros and Evaldo (left back) to Joinville for a fee of 325 k euros because as I said earlier, we had 4 left backs and we only need 2.

This month 3 wins and a draw, you can say it is a very good month, but when I think and I realize that we made a draw agains Estoril, one of the weakest teams in the championship, I am not happy.
Our best players this two months were Montero who scoredt 5 times in 6 games, 1 assist and one man of the match award, Andre Carillo with 2 goals and 1 assist in 6 games, this kid has great potential, I feel like he can become "the new Figo", Diego Capel and mareque also had great performances.
At the end of the september the table looks like this:

The only thing that makes me wonder if we can succeed is the way Benfica is playing, they scored 24 goals in 6 games! we only scored half, 12 goals.
1
Login to Quote