InvertedWingbacks
8 years
I'm thinking i'll probably play them both: Fletch is injured just now...i'm mostly gonna base that kinda thing on form; especially with the strikers, cause a fair few play at a high level

http://i2.dailyrecord.co.uk/incoming/article1263693.ece/ALTERNATES/s615/AP-DO-NOT-USE-The-Tartan-Army-celebrate-a-new-hero-as-Jordan-Rhodes-runs-towards-them-after-scoring-on-his-debut-1263693.jpg
Scotland travelled to Wales today in Miller's first qualifying match. Many fans were pessimistic about the side's chances, given the presence of Garth Bale and Aaron Ramsey in the Wales side.

Scotland stunned the Millenium Stadium into silence after 10 minutes, when Steven Fletcher rounded the keeper and tapped in from 5 yards. Scotland didn't rest on their laurels, and were 2-0 up inside 15 minutes, when Fletcher scored a sweet volley from a Jordan Rhodes cross.

The Welsh looked shell-shocked, and the fans all round the stadium were desperate for their side to pick themselves up and fight back, but the teams went in with Scotland 2-0 up, and looking good for their lead.

The second half was uneventful, and 25-year old Ickechi Anya made his international debut, coming on for the final 10 minutes.

The result keeps Scotland's slim qualification hopes alive, as they face Croatia in the second game of this international double-header.

InvertedWingbacks
8 years
Thanks mate! next game's croatia, who're top of the group just now...gonna be tough
Login to Quote

http://files.stv.tv/imagebase/188/623x349/188964-robert-snodgrass-left-slides-the-ball-past-croatia-keeper-stipe-pletikosa-to-give-scotland-the-lea.jpg
Scotland made one change to the side which defeated Wales in Cardiff, with James Morrison replacing the injured Scott Brown in midfield. The game presented an opportunity for Scotland to take second spot in the group, and they seemed up for the game in the first ten minutes, keeping the ball well.

Graham Dorrans was booked after 42 minutes, for a tackle in the centre circle, and the resulting long ball forward resulted in a Croatian corner, which was dealt with promptly by the Scottish defence, Alan Hutton playing it to safety. That one attack was the only real highlight of the first half, and the teams went in evenly matched in both score and performance.

Miller made a bold move at half time, replacing Jordan Rhodes with Norwich attacker Robert Snodgrass. Scotland started brightly after the break, with two attempts at goal in the first 5 minutes of the second half, although both were diverted away by the Croatian defence.

Croatia moved ahead after a flowing move, which started deep inside their own half, and was capped by a neat header from Petric on 54 minutes.

Scotland replied after 66 minutes, when Graham Dorrans played a lovely lobbed pass straight over the defence, and Robert Snodgrass volleyed home from 12 yards. Dorrans made way for Barry Bannan after 75 minutes, as Scotland looked to cement the valuable point.

However, the players on the pitch weren't content with just a point, and Snodgrass secured his super-sub status with a calm placed finish from a Steven Fletcher lay-off 7 minutes from time. Croatia looked rocked, and they fell apart as Snodgrass and Fletcher combined in an identical move no less than a minute later, to put Scotland 3-1 ahead, and send the Tartan Army into Raptures.

Another excellent performance from Scotland, and another international scalp claimed with aplomb. 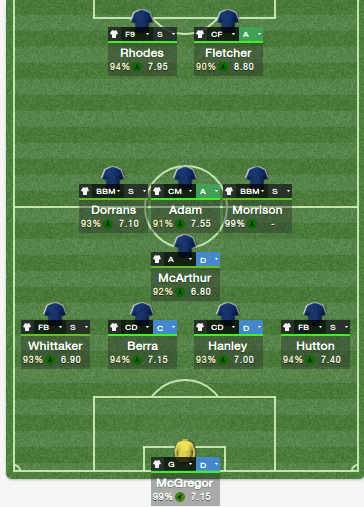 if we can beat Belgium we'll qualify

http://news.images.itv.com/image/file/293203/article_6a2326283808bb39_1384895177_9j-4aaqsk.jpeg
Scotland travelled to Belgium to face a side studded with stars, including Kevin De Bruyne, Eden Hazard, Marouane Fellani and Vincent Kompany. The media and fans followed, not expecting any kinda of positive result, but noting that, in order to come away with anything, they would have to keep the attacking talents in the side at bay.

There was controversy after only 8 minutes, when Charlie Adam was sent off for a tackle deep inside the Belgian half, after what looked like a dive from Belgian right-back Gillet. Jordan Rhodes was sacrificed, as Miller brought on James Morrison to shore up the midfield, and still maintain an attacking outlet.

Scotland's makeshift midfield looked to be holding out, and the Scots thought they were leading after 21 minutes, only for Steven Fletcher to be ruled offside; fans all around the stadium were incredulous, but the Scottish side soldiered on.

They didn't have to wait long to finally make the breakthrough, Scott Brown lashing the ball into the back of the net after a flowing move which started with goalkeeper Allan McGregor. The travelling fans were beside themselves with joy, and manager Miller was straight out onto the touchline, urging his side to hold it together, and the teams went in for half-time with Scotland 1-0 up, and 5 points clear of Belgium in the race for Qualification.

Steven Fletcher almost doubled the Scots' lead after 52 minutes, but Courtois did well to tip his raking shot wide. Graham Dorrans' corner came to nothing, and the support were hoping the side didn't rue the wasted opportunity.

Scots star Steven Whittaker was forced off injured after 75 minutes, and it was Inverness left-back Graeme Shinnie who replaced him, winning his second international cap.

The final 15 minutes were tense, and Belgium broke Scottish hearts, Axel Witsel scoring in the 90th minute to pull them level, after some great passing in and around the Scottish penalty box.

A draw was to be the final result, and Scotland can be incredibly proud of the performance they put in here; A result which means that a win in Serbia will guarantee qualification, although the suspension and injury to 2 key players mean that may be a more difficult task than expected. 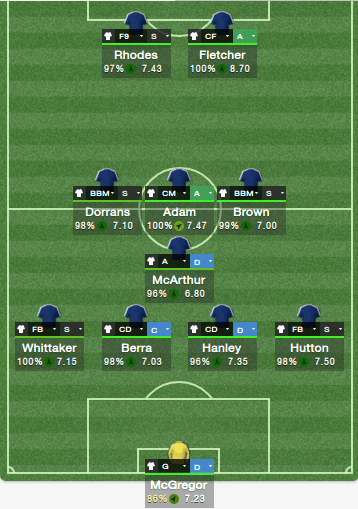 Within half an hour, Scotland's qualification chances were boosted by the news that Wales were beating Belgium 2-0, leaving Scotland clear and very much in the running, and this was boosted by Graham Dorrans' lobbed finish from the edge of the area on 37 minutes.

Jordan Rhodes put Scotland 2-0 up with a beautiful shot from the edge of the area, and Scotland's passage was sealed when Branislav Ivanovic scored an own goal in the 84th minute.

The Scotland support remained in Hampden for hours after the match celebrating their team's play-off spots, and the team were seen in a nearby pub, celebrating before returning to their club sides.

Other teams to secure play-off spots are Turkey, Ukraine, Russia, the Republic of Ireland, France, Greece and the Czech Republic. 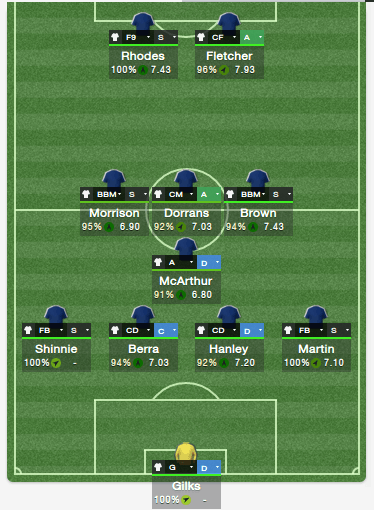 http://scottishcomedyfc.com/wp-content/uploads/2013/02/Tartan-Army.jpg
The last time Scotland travelled to France, they were hoping to qualify for Euro 2008, and James McFadden scored that goal from further out than anyone could have anticipated. The massed media and the army of Scotland fans will have been hoping for a repeat of that night, to give them the advantage in the return leg.

With the nation struggling with injury, Miller named some fresh faces in his squad, and fans started out dubious about the selection, but the starting XI was still competitive looking as they lined up against a France team including the likes of Ribery and Giroud.

France were nearly ahead after Patrice Evra sliced the right side of the Scottish defence apart, but Gilks tipped Giroud's header away, and Grant Hanely completed the clearance. It was a nervy start from both sides, and the Tartan Army were incensed when Steven Fletcher had a goal chalked off for offside on 42 minutes.

Dimitri Payet had France ahead after 61 minutes, after his run sliced the Scottish defence in half, and Gilks was powerless to resist the powerful, placed finish.

Miller reacted immediately, replacing the sub-performing Jordan Rhodes with Jamie Mackie, in an attempt to freshen up the Scottish attack. It wasn't looking to be working out, as Loic Remy widened the gap with a poacher's goal on 75 minutes, and Scotland were left with a mountain to climb in the return leg at Hampden.

Speaking after the game, returning captain Darren Fletcher remained optimistic, saying "Obviously it's disappointing to lose today, but it's our first loss since Willie took control, and we're still confident we can get a result at Hampden, with the fans behind us. Missing out on the World Cup now would be heartbreaking, and we're determined not to let that happen." 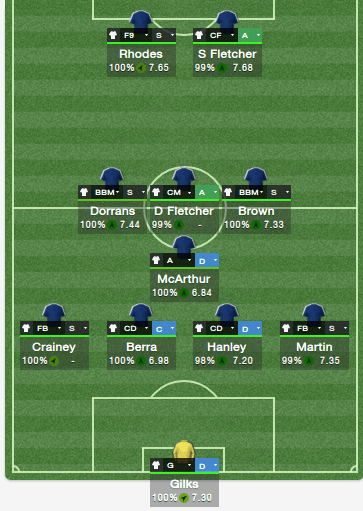 Slid3Tackle
8 years
Bad luck mate...anyway, a great performance to qualify even to play-off!
Login to Quote

InvertedWingbacks
8 years
Yeah...still the second leg...although if we beat France by 3 goals i'll eat my hat...

given past performances; anything's possible.
Login to Quote