A curated list of the classic Football Manager databases. Step into the time machine and relive football history! 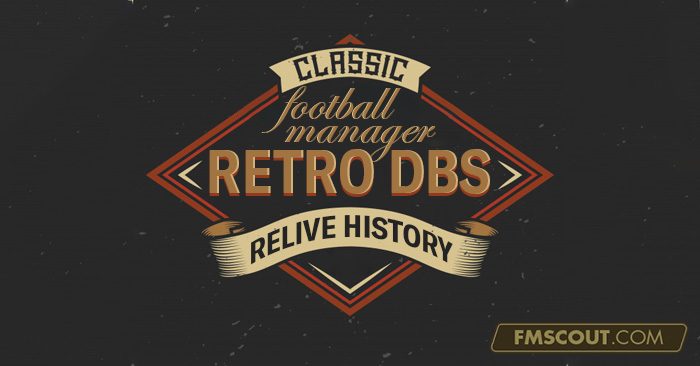 Welcome to the past!

This is an attempt to highlight classic databases, make them more visible to the community. At the same time this is an opportunity for content creators to work together more on such throwback projects.


With these retro databases for Football Manager, you can go back in time in certain historic eras and witness legendary footballers in-game. Throwback databases like that can really make you feel the nostalgia.

You have the chance to train and coach all the legends from the beginning of the century, in the best football management simulation game ever.

You can play FM2020 as if you're starting in the 2011-12 season. Go back to that season and make history. 14 playable leagues updated.

Everything in the FM20 database, has been reverted to 2006. All the leagues are as they where back in 2006, with all the teams from back then.

This season in particular has a spot in football history forever. England have just won the World Cup at home and the Scottish team Celtic won the European Cup/Champions League. Some of the best players from around the world, is still remembered as the best of all time in their respective countries.

Everything in the FM19 database, has been reverted to 2003. All the leagues are as they where back in 2003, with all the teams from back then. The players attributes are copied from CM4 (2003/04 season).

This FM 2018 database takes you back to the 1985-86 season. Relive & change history with some of the biggest legends of all time. Some epic teams, managers and players from around the world in the original leagues and teams from 1985/86.

This database takes you back to the 1995-96 season. Relive and change the history with some of the biggest legends of all time.

This is a throwback database for the 1997/98 season. The Database contains more than 10k players from all around the world with tons of wonderkids, even younger players like Messi, Ronaldo, Ronalidnho, Kaka, Tevez and many more are in the database in their original clubs.

Explore the world as it was in 1991. Whether you'd like to try yourself in one of strongest world leagues such as Soviet Union or Yugoslavia, or competing against those mighty nations on international level.

2000 soccer players, many talents as young, The European Cup, UEFA Cup & European Cup Winners Cup have all been brought back. Previous Nations and National Leagues such as Yugoslavia and the USSR have been recreated. Trying to recreate as many club and national sides to the player rosters they had back in the build up to that years world cup.

The game will still start in July 2009, but the football world will have been reverted to the season 1995/96. All players and managers are as of 1995: you'll see Newcastle pushing Manchester U for the title, Coventry, Wimbledon and Southampton in the Premiership, Eric Cantona serving his suspension, players like Colin Hendry, Tony Adams, Gary Mabbutt, Dave Watson...