Pochettino's comments: Its nice to get a instant win after our loss to Brasov at the start of pre-season. The defenders definitely tightened up their play after my less than happy comments. The fullbacks really stood out for me. Their link up play with the wingers was fluid and caused many teams problems. In our match against Brighton the majority of our goals came through exploiting the flanks. Since asking the wingers to cut in as inside forwards their has been a vast amount of goals coming from them. Especially new signing Depay, having scored four goals. He definitely gets my pick of the players.

Many expected new man Mauricio to bring familiar faces from Southampton this window. Players like Morgan Schniederlin, Jay Rodriguez and Nathaniel Clyne all thought were to be on the 2014-15 Tottenham team list. Instead today we have been informed that longtime Villian's man Fabian Delph has moved to the North London club.

Delph has spent years at Aston Villa and last season he looked to truly come into his own. Through hard work and determination Fabian proved that he is able to play at a higher level. With Villa still playing at a mediocre level it was only a matter of time before their midfielder looked to offer his skills elsewhere. 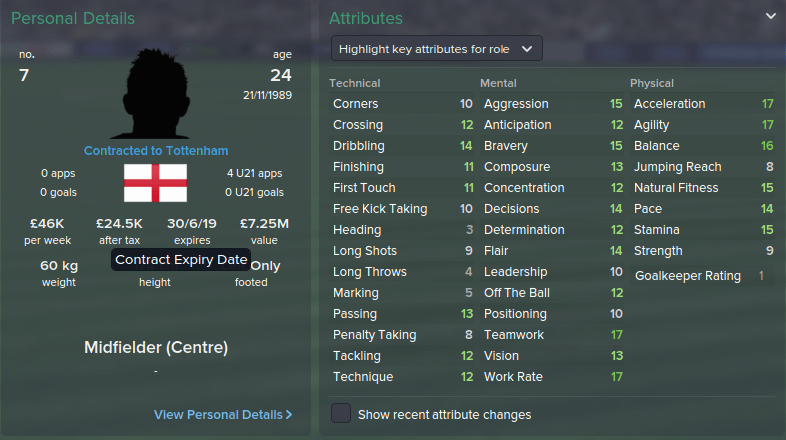 With Tottenham only recently letting go of their Brazilian flop Paulinho many fans wondered whether or when Pochettino would bring in a replacement. Delph looks like the perfect replacement. His attitude in training and on the field presumably played a big part in his recent transfer. After the Lilywhites manager stated he only brings in players with desire and commitment.

The deal is estimated to have cost Tottenham £5 million pounds, a million less than what Aston Villa bought him for.


Another two signings landed by Tottenham are Sascha Horvath and Yassin Mohammed. Horvath joins from FK Austria Wein for £1.6 million. The Austian club also keeps him for one more season on loan. Yassin Mohammed comes in on a free transfer after being dropped by Belgium team Royal Mouscron-Péruwelz. Yassin has been sent on loan to SkyBet League 1 side Port Vale for the season. 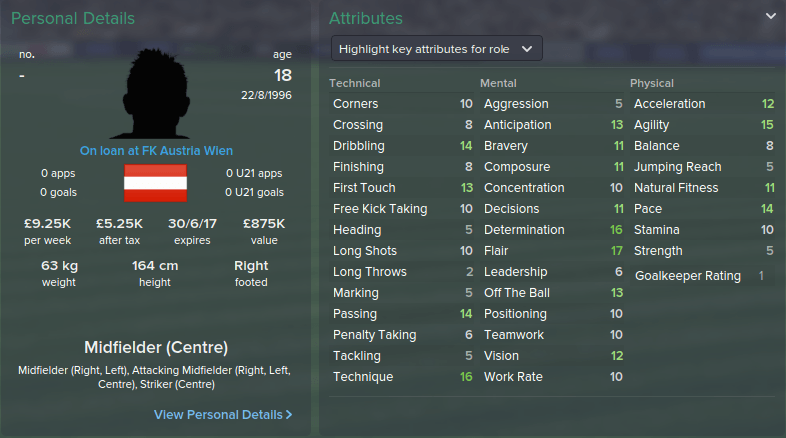 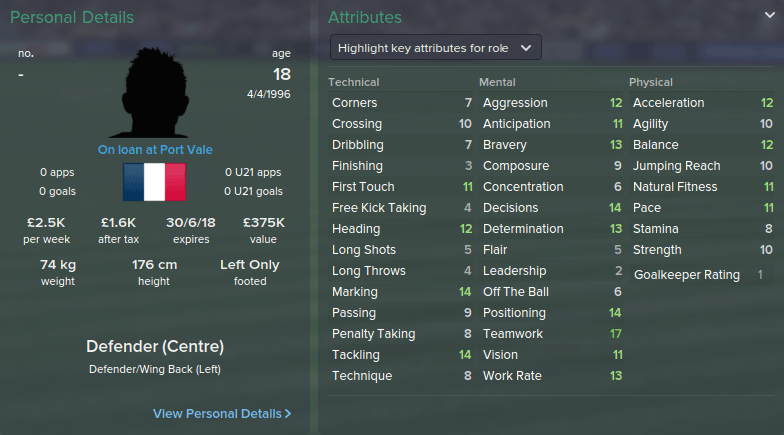 On outgoings news for Tottenham. West Bromwich Albion have bought out of favour Benoit Assou-Ekotto for £2.8 million.
Login to Quote


A strong start for the north London club puts them second in the Premier League and their Europa group. Pochettino will undoubtedly be happy with the performances of midfield who have been firing on all cylinders being able to bag 20 goals in 7 games. The biggest surprise comes from new signing Dorin Rotariu who has put away number of those goals himself. Many thought he didn't have the quality for the Premier League. Dorin has proved that wrong with his ability to find the net and vision to set up others. Four goals in three Premier League games and three assists.

http://www.africatopsports.com/wp-content/uploads/2014/02/Demb%C3%A9l%C3%A9.jpg
Averaging a solid 7.67 put Mousa at the heart of my midfield. Being involved with an impressive work rate, to be part of every attack and to win back the ball throughout each match. 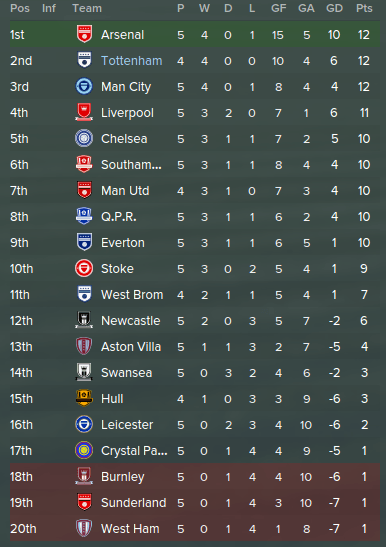 TonkaWolves115
5 years
Great start to the season mate - hope you can carry it on!!
1
Login to Quote

Thanks and I hope so
Login to Quote


Manager vs Player bust up

Inside information has been sent to us that this week a bust up at Hotspur Way training ground Enfield had broke out. Rumour has it that Pochettino attempted to ship the Togo striker Emmanuel Adebayor during the summer transfer window. The Togo international refused the transfers that came in for him, deciding he could further his career in north London still.

It comes to no surprise then that when squad registration came around Adebayor's name was absent from a particular one. Maybe not the most outrageous choice but, Pochettino decided to leave Adebayor of his squad for the Europa League. Able to play in the Premier League and domestic cup ties was apparently not enough for Adebayor. Slamming Mauricio for poor management and being absent without leave numerous times has led to a bust up at the training grounds.

We managed to question Mauricio before he left Hotspur Way last night. This is what little he had to say: "Adebayor has made his opinion known. I am not upset with him for voicing his opinion, I am disappointed at the manner he did it."

Who knows what will happen with the veteran striker at Tottenham. It seems only likely that he will be on his way of White Hart Lane during the January transfer window. His apparent childish behaviour has definitely done him no favours.
Login to Quote


With a month into the Premier League we take a look at the shape and way Pochettino is lining up his Tottenham side in the English league. 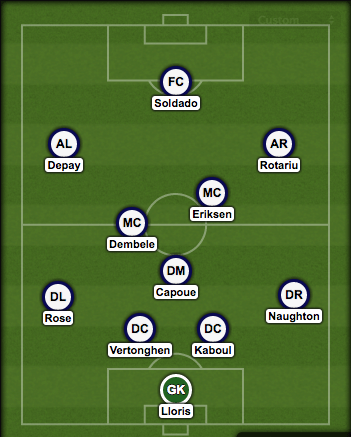 Goalkeeper - Hugo Lloris Starting off with Tottenham's shot stopper and French international. Lloris has been in decent form lately. Unfortunately he has been able to tally a clean sheet as of yet, but this doesn't take away from the pure quality he is. With Pochettino choosing to operate with fullbacks who like to push forward, having a sweeping keeper like Lloris proves useful. Spurs fans remain hopeful that the French keeper will choose to stay at White Hart Lane with interest reportedly brewing.

Center back - Jan Vertonghen & Younes Kaboul Both Premier League veterans have been proving their worth. Keeping colleagues Chiriches and Fazio out of the starting eleven for now.

Full backs - Danny Rose & Kyle Naughton With Tottenham's new shape under Pochettino full backs are asked to contribute to attacking movement as much defensive duties. No complaints from swift Englishman Danny Rose, where bombing down the left side has become a natural occurrence. Even last seasons fans least desirable Kyle Naughton has been relishing his chances in attack, bagging himself a goal in the Europa League in August.

Defensive Midfielder - Etienne Capoue The defensive midfielder only made 12 appearances for the club last year but finds himself in the starting XI for Tottenham. Breaking down attacking movement and dispersing passes to the player makers.

Midfielders - Christian Eriksen & Mousa Dembele Both midfielders have been given a distinct role at the club. Eriksen having to sacrifice his favoured attacking midfielder role for a more central play making role. Sending killer balls in for attacking players to finish. Dembele on the other hand has a more rotational role as a box to box midfielder. Having to contribute to both attacking and defending aspects of the Tottenham build up.

Inside Forwards - Memphis Depay & Dorin Rotariu Depay has made himself the obvious choice as left winger. With his pace and work rate his recent switch to Tottenham has been with few hiccups. Grabbing a goal against Newcastle recently. Perhaps the most surprising and exciting prospect has to be new signing Rotariu who has made himself known at 19 years of age already scoring four goals in the Premier League in his less favoured position of right winger.

Neal
5 years
What about Lamela The month of September have been favourable for the North London club. Many thought it would take time for Pochettino to implement his style at the club. Some even believed the players he had at his services weren't up for it. Though it would seem that Tottenham's current squad have picked up the style and are running miles with it.

Player of the Month: Alexandre Lacazette

http://s.olweb.fr/ol/image/article/illustration_s/g/269/53668.jpg
Scoring 4 goals this month no one can look past Lacazette for the player of the month award at Spurs. His performance against Stoke showed his true class and ability to finish. 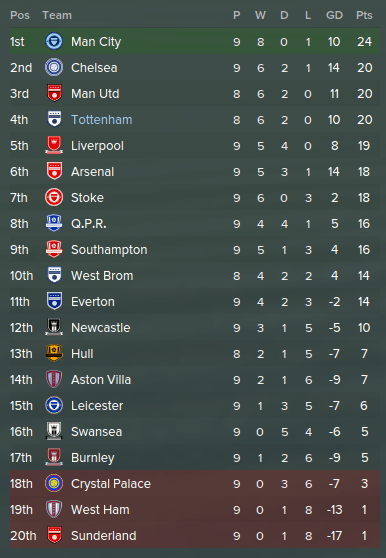 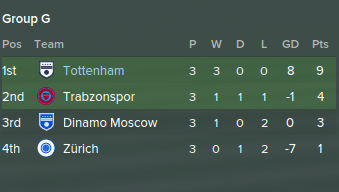 Lamela will probably be back in the Starting XI after he scored in the Stoke game and Rotariu hasn't been putting in the same sort of performances. I also got Townsend though and he was brilliant in Pre season. So many options!!!!!! guess I shouldn't be complaining
Login to Quote

Spurs got the month of November off to a flyer with a win at the Emirates against North London rivals Arsenal. Many fans have been waiting to give the Gunner fans some stick for a while and a win away from home is definitely the building blocks.

Tottenham also found themselves through to the knockout stages of the Europa early. Winning their game against Dinamo Moscow ensuring a place in the later stages of the competition. A competition Pochettino has said to hold in high regard.

Player of the Month: Dorin Rotariu

http://www.pressalert.ro/wp-content/uploads/2014/05/dorin.rotariu.jpg
After a recent slouch in form Rotariu was reminded he has the ability to make a name for himself and push to be in the starting XI sooner than expected. The Romanian took to this scoring a hat-trick against Crystal Palace showing his true determination and work rate. 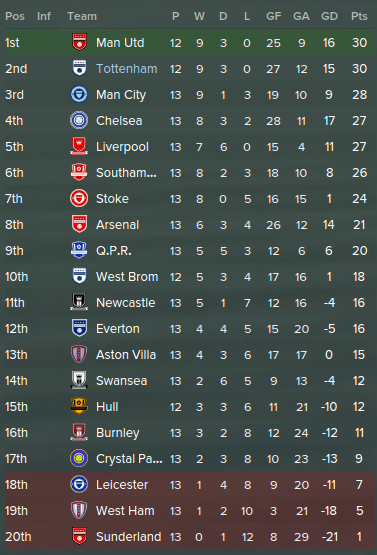 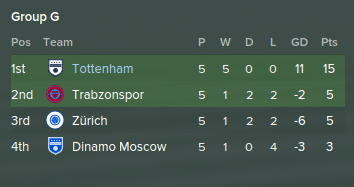 After four long months of recovering from a hip injury Tottenham's Kyle Walker has returned to training with the first team. Walker will be looking to taking back his starting XI position from fellow Englishman and best friend Kyle Naughton. Naughton has been playing in place of Walker since the start of the 2015/16 season. Rotating with new signing Eric Dier.

Naughton has been putting in solid shifts for the starting XI since Walker's injury and it won't be easy for the recently recovered right back to take back his former spot quickly. Although we are certain that Pochettino is happy to have the explosive player back as he offers a different shape to the back four. Known for his pace, Walker will be a welcome sight.

Surprisingly Walker has been instantly picked up for Roy Hodgson's England squad due to injuries and reputation. When questioned about his return and inclusion in the England squad, Walker had this to say "I am delighted to be able to return fully fit for Tottenham, and I even more excited to be given a chance in the National squad swiftly after my recovery. I was a little surprised at first but, with the injuries on Nathaniel Clyne I can understand my call up."
Login to Quote

You are reading "Pochettino".