That summer seemed to last forever. For a man like Marek, whose life revolved around the footballing season, summer just seemed like a huge waste of time. Many months of sitting around, without work to do was awful, but it did have its pros. It gave him time to gather to necessary information on the potential managerial targets. For Marek was closer to the sport than many, as literally his whole existence depended on the fact that he was good at doing his job. But what was his job? To please the men upstairs.

Since his first memories, Marek always remembered the men upstairs. His father taught him all he knew about his job, but the most important lesson he ever learnt was never to question those men. Those men had total control over your life, he said to a teenage Marek, obey and you will be rewarded, fail to obey, and even death will seem favourable compared to the fate you will suffer. Marek was a good child, and followed his father’s instructions, whether he understood their meaning or not. His brother Samuel was not the same.

Always a rebel, Samuel hated the strict rules he was brought up with. Tall, strong and handsome, the boy knew nothing about his greater role in the world, he only saw his life being wasted, part of something he would never understand. Of course, building a machine for mind control sounded crazy, but to be the test subjects for its success was something no man, let only a child, should have to endure. The nightmares began to take their toll on Samuel and by the age of 17 he decided to run away from the Institute. When he was caught the next day, Marek had to watch as his older brother was shot 12 times. Since then, he knew that he could never escape this life.

Flicking through the folders on his desk he saw the progress he had made whilst at the Institute. Test Subject 1 was the biggest breakthrough in its existence, but Arthur Anderson was never meant to last for so long. The poor child believed he was the victim of the Hillsborough disaster, and his life goal was to take down football from within. In reality, he was a schoolboy from Surrey who had never watched a game of football in his life. When it became clear that Arthurs mind could no longer be controlled by the Institute, Marek had to step in to end his life.

Test Subject 2 was the Marek’s first case as the head after his father passed away. Chosen by the Serbian himself, Robert Prosinecki was a brilliant choice. Now the machine had been adapted to be less extreme, it allowed the use of a figure already accepted by the football community. Prosinecki proved very successful, both in the sport and outside of it. However, even Marek could not have foretold what would have happened next. The event of winning the Europa League was too much for the man to deal with, and the mind control tore his mind apart. Marek had to terminate the project and removed the mind control, leaving Prosinecki to go back to his normal life, and lucky for the Institute, no-one suspected a thing.

Now Test Subject 3 had been isolated and the machine had been greatly improved, the stakes also rose. The men upstairs wanted results. They had spent too much of their money and time for them to give upon this. Test Subject 3 had to succeed, otherwise, it was all over. For Marek, this meant the end of everything he knew. The end of a life lived for one goal and purpose. The end of Marek. Termination.

Next Update - The Parcel In the Night

This mind control stuff though 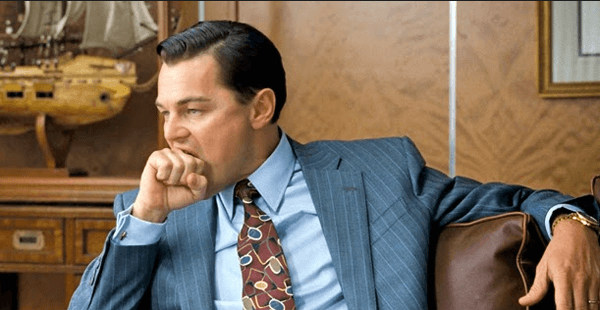 @Walter - Haha, you know I love some backstory!

Forgot to mention this in my first post, credit to Tallery for the amazing banner.
Login to Quote

The Parcel in the Night


The darkness shrouded the room. Sunshine poked through the narrow gaps in the blind, but was blocked by the suitcases mounted in front of it. Next to it lay a small table, with 2 cushioned chairs either side of it. On top lay a thick book that had a marker slipped in near the end. Apart from that, the room seemed empty, almost unused. In fact, the only sign the room had ever had any occupants, was the couple who lay comfortably on the king size bed that took up most of the space. The figure closest to the door was male and small, no more than 5.7 ft. His head and shoulders were uncovered by the duvet, and his jet black hair was neatly shaven. Next to him was a blonde woman, even shorter than her husband. Her face was small, and her hands were spread across the bed. Neither had any idea of the events of the night to come.

A loud banging at the door was heard, and the man jolted awake. Slowly pulling away the covers, he stood up and crept towards the door, trying not to awaken his wife. The door creaked open to show a tall hotel worker, with an apologetic expression.

‘Hello sir, I’m so sorry to wake you up, but I have a parcel here for you.’ the young man said motioning towards a small cardboard box placed on the floor next to him.’

‘Jesus kid, do you not know what time it is?’ the man whispered angrily.

‘Again sir, I apologize, but the man who gave it to me said it was urgent you got it.’

‘Unless my mother died, nothing is urgent enough to wake someone up at this time’, he complained. Seeing that the hotel employee was not getting the hint, he gave in. ‘All right, hand it here.’

Stepping outside the room, he pulled the door closed, leaving it just ajar enough for his to re-enter. He was surprised to find the parcel was extremely light and he quickly ripped open the bounds, to find a single piece of paper. After quickly cursing under his breath in Italian about how this was a waste of time, he reached in and took out the paper. It had just two words written in ink in the middle of the sheet.

The man automatically glanced upwards, and to his shock saw a gun pointed at his head.
‘Night, night, Antonio.’

http://calcionow.it/wp-content/uploads/2013/05/stramaccioni-inter.jpg
Stramaccioni's death has been met with wide backlash against the extremist groups in football


It has been confirmed in the last 24 hours that former Udinese manager Andrea Stramaccioni has been found dead inside his apartment in Udine. Aged just 38, he was found by his wife Dalia who was visiting friends at the time of his death. The police have confirmed investigations into the nature of his death, as it has been confirmed he was shot in the head, with no gun left at the apartment. Many are pinning this on Napoli ultras who have a reputation in Italy for firearm-related activities.

Stramaccioni was born in Rome in 1976, as growing up, was always addicted to football. Though he wasn’t the most naturally gifted player, he did progress through the ranks of Bologna from their youth academy. However, his playing career was cut short when he suffered a heart-breaking injury that saw him never play again. Unlike so many who have sadly been put in this situation, Stramaccioni took it in his stride, and focused all his attention on becoming a football manager. He was given the chance to coach both the Roma and Inter youth sides, before he got his dream chance as the manager of Inter Milan’s first team. His year in charge however was less successful than he would’ve hoped, and saw his side in 9th at the time of his dismissal in May 2013. A highlight of his short tenure include a superb away win against a Juventus side who had not lost in 49 league games. In June 2014 he made his return to football, replacing Francesco Guidolin as Udinese manager.

Supporters have flocked in great numbers to pay their respects to Stramaccioni, with a candlelight procession to be held outside the Udinese stadium tomorrow night. The club and several of those closest to the Italian have shown their support for his friends and family on social media. 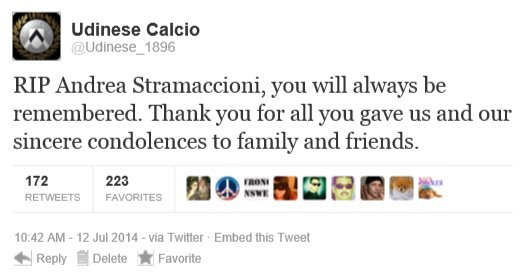 Whether his death was anything to do with the sport he loved so much, we may never know, but Andrea Stramaccioni will not be forgotten. The decision regarding the appointment of the next Udinese manager will need to be taken in due course, but now is a time for commemoration.

Verdinho
5 years
Only in Serie A would you find this. Nice update

No1VillaFan
5 years
ooo awesome update I think it was P-Kiddy!
Login to Quote

You are reading "Antonio Di Natale - The Slave of Football".