Hello everyone! Welcome to my first proper FM15 story! Over the last few months, I’ve been trying to find a save I enjoy on the game, but I haven’t been able to, up until this point. Recently, I have been enjoying a Wolves save, and I have gone further than I have ever gone on the game (admittedly, that didn’t have to be far…), and after some consideration, I have decided to go for it!

*gets hit by thrown vegetables*

Yes, yes, I have a terrible track record with stories, but that was FM14 (and FM13. And FM12), and I feel like I can sustain this story for longer than I have done before (ie. longer than September). I can’t promise that this’ll last that long, but I can promise that I’ll try.

So, onto the story. As I said, I have been really enjoying a save with Wolverhampton Wanderers recently, otherwise known as Wolves. They were relegated twice in a row, going from the Premier League to League One, but have recently bounced back and returned to the Championship.

In this story, I would like to use both graphics and regular writing, and I have a style that I am planning to use specifically for this, that I’m not going to say yet. However, I’m running out of things to say, so I’ll just get to the actual story stuff and hope you all enjoy!

Cappy13
5 years
Good luck will be following
Login to Quote

BadWolf: Thanks, it'll be interesting to see how we compare.

Tallery
5 years
Good luck incapable, hopefully this will be your best (and longest) story ever. And of couse, I'll be following!
Login to Quote

AlexTHFC
5 years
Tallery: I'd thank you but I'm incapable 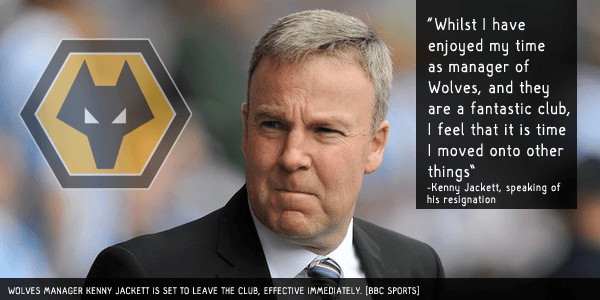 Manager of Wolverhampton Wanderers, Kenny Jackett, has today confirmed that he is to be leaving the Championship club ahead of the 2014/15 campaign, effective immediately. The circumstances of this departure are currently unknown, other than ‘personal reasons’ and wishing to move onto other things, but rumours suggest that a spat between the 53 year-old and a Wolves player are what sparked his exit.
Jackett reportedly alerted owner and chairman Steve Morgan of his resignation at 7:30 GMT yesterday morning, with ‘personal reasons’ being quoted as the reasoning behind this. The English manager got Wolves promoted to the Sky Bet Championship last season, achieving a League One record points total of 103. 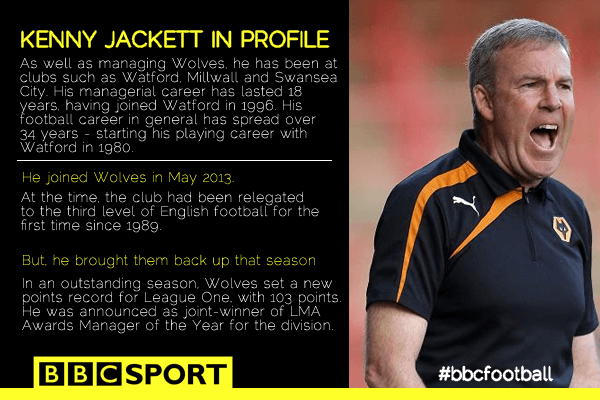 Speaking to BBC Sport, Jackett said ”My reasons are simple. Whilst I have enjoyed my time as manager of Wolves, and they are a fantastic club, I feel that it is time I moved onto other things. This is nothing personal towards Wolves, as I believe they are a brilliant team and I respect every player there completely. This is me wanting to move onwards and upwards in my career.”

”I want to thank the chairman, Steve Morgan, for the support throughout my time, as well as the players and every single member of staff, as well as everyone who has supported me at Wolves. Steve Morgan is an excellent person and it’s been a pleasure working with him.”

Steve Morgan also made this statement on Wolverhampton’s official website, ”It is with great sadness that I confirm the resignation of Kenny Jackett, effective immediately. I thoroughly enjoyed working with him and he will be missed by everybody at Wolves. We part on good terms as we wish him the best of luck throughout his managerial career.”

Assistant head coach Joe Gallen will take temporary charge of the club, although it is believed that Wolves are searching for a new manager, and have been since yesterday. However, in the event that this cannot happen, Gallen will remain as manager for the season.

Reaction to Jackett’s resignation have been varied - with Twitter yet again proving to be an interesting source to find out fans’ reactions. Here are some of the reactions seen today.
@waynedawolf2904: Gutted to hear that Jackett’s quit. Understandable though. Wish him the best. #jackett

@thongallery: It’s k, Jackett was incapable. #jackett
Candidates for the now vacant Wolves job are limited - with Tim Sherwood being a possibility, as well as other recently sacked managers, such as Neil Warnock, Nigel Adkins or Paul Ince. There’s no current favourite for the role, so it really is anyone’s guess as to who exactly will replace Jackett.
Login to Quote