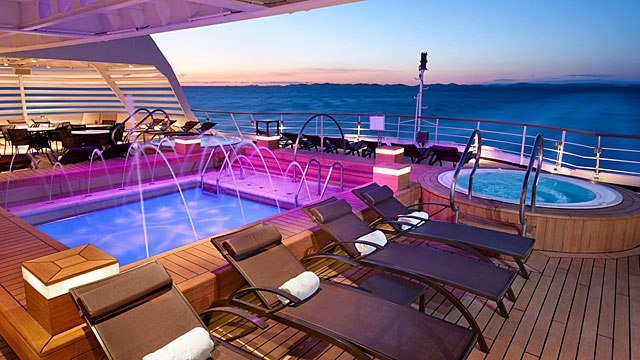 I gazed at the glimmering water of the ocean below as my ageing hands brushed the smooth oak handrail reflecting on former glories of years gone by.

The deck of the cruise ship was deserted as my thoughts drifted and I lost myself in a swirling haze of nostalgia, closing my eyes as the noise of a thousand voices filled my ears.

I had guided the #InterVincibles to Champions League glory, masterminded my beloved Aston Villa to Premier League and Europa League titles as well as numerous F.A. and League Cups and helped them back to the Premiership following their relegation while I was on my Italian adventure.

I tried to balance my second Villa spell with managing the Ukrainian national team but that was a bridge too far - football wasn’t just my job, it became my obsession.

A cold gust of sea air snapped me out of my daydream and I returned to my cabin.

As I stared at my reflection, I barely recognised myself - my once thick, dark hair had thinned and spawned some flashes of silver while my youthful, bright eyes had now lost their sparkle.

The Ukraine job lost me my wife, Jia Li. She said I was ‘too busy’ to fit her in and as the years have passed, I don’t blame her - but it doesn’t mean I don’t think of her every day. For the eighteen years since she’s left, I’ve been a shadow of the man I once was.

I climbed in to bed but couldn’t sleep.

At 55 years old, I still had time to be something but I had lost the desire, heart and passion I once had and I regret the decision to walk out on Villa a second time, now more than ever.

Two days after I left Birmingham, I resigned as Ukraine manager and moved to Athens - yearning to fade in to the background and become a nobody - allowing me to grieve for my Jia Li in peace.

I’ll could see the look on her lifeless face as I walked in to our bedroom to her lying there -motionless - clutching a crumpled piece of paper which told the tale of a trouble soul, a lonely young woman who took her own life than be with anyone other than the man she loved.

I woke up with a jolt - I’ve had the same dream every night since she overdosed - constant flashbacks to the night my whole world caved in around me.
Login to Quote

Walter
5 years
Nice start, I can't wait to see who you manage

Arvind
5 years
You're back

Jamesg237
5 years
Welcome back. I can't wait for this story to really get started.
Login to Quote 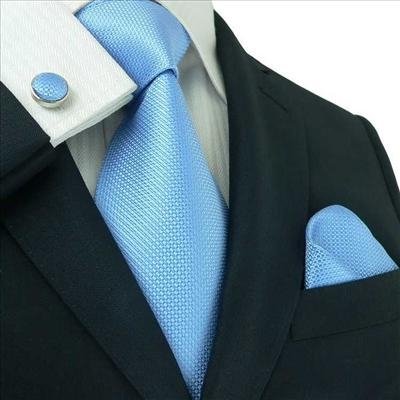 As we sailed back to Southampton on the final leg of the cruise, I sat supping a Southern Comfort and Coke at the ship’s main bar.

“Is this seat taken?” Asked a voice.

I shook my head and a very well dressed, elderly gentleman sporting a gold Rolex and shiny black shoes plonked himself beside me.

“Been out of the game a long time now, it’s time you got back in the dugout… And it just so happens that I could do with a new manager!” he says with a laugh and a wink.

I glanced over and stared at the face across from mine. He looked somewhat familiar but I couldn’t place him.

A team’s crest poked out of his grey jacket, embroidered on to a Sky Blue tie and as soon as it caught my eye, it suddenly clicked in my head who exactly that I was speaking to.

“Glenn handed in his resignation this morning. The fans were getting on his back and he started to feel the pressure - and well, you know what our lot can be like!” he quips.

“Tell you what, the job is yours if you want it. All you have to do is say yes. I understand it’s not as high profile as you’ve became accustomed to but you could help us wrestle silverware away from the capital clubs,” he finishes and slides a business card my direction.

He finishes his drink, gets up and pays for both of our drinks while slipping the waiter a £20 tip.

I didn’t think much more about it until we docked in England.

I was due to spend a few days in Birmingham and visit a few pals from my Villa days and then head back to Athens. That was the plan anyway.

I didn't want to go back to Greece and I decided it was time to stop moping and get back in to the game.

“Final call for Flight EZY6762 to Belfast, can any remaining passengers please make their way to Gate 26…” echoed the tannoy announcement.

Josh_MU
5 years
Great to see you back man!
Login to Quote 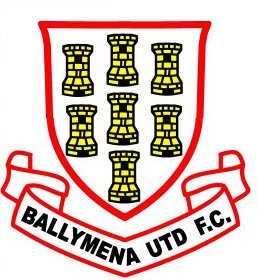 Standing on the pitch at my local club - Ballymena United of the Irish Premier League.

Ballymena Showgrounds was one of the most impressive stadiums on the island with a capacity of just over 4,000 - a far cry from the San Siro and other arenas I'd plied my trade in prior to my managerial hiatus.

I'd stepped off my plane in Belfast, traveled the short 30 miles down the M2 Motorway to Ballymena and called the number on the business card as soon as I'd checked in to my hotel.

The man from the ship was John Taggart - Chairman of Ballymena United.

He could barely contain himself at the excitement of having installed me as the new manager of the 'Sky Blues' and had eagerly set up a press conference for 11am the following morning to announce some 'big news.'

John strode across the neat grass of the Showgrounds pitch.

"You'd better get some rest - tomorrow will be a busy day!" he said as he ushers me in a taxi back to my hotel.

pompeyblue
5 years
Loved your old stories, so I'm sure that I'll enjoy this. Welcome back and good luck!
Login to Quote

TheLuckOfTheIrish
5 years
Absolutely loved your stories before I joined the site! A little known secret… your stories were genuinely the reason why I joined this site… Being able to comment on your stories and tell you what I thought of them persuaded me. Good Luck… ( Not that you'll need it or anything

If I’m honest, the morning’s press conference went past me in a dazzling array of flashes and robotic answering of the same questions from different journalists and I don’t really remember much.

I just wanted to get stuck in, not see my name in the local press or on Sky Sports News before I’d even met my players - which I would in a few hours.

Irish League football is mainly made up of part-time players bar a small percentage of full time professionals, so rather than seeing my squad from 9am to 4pm every day as I’m used to - I see them at training two nights per week for three hours at a time.

They seemed like a good group of lads and I was familiar with a lot of them from reading match reports - I was born in Ballymena and grew up just 12 miles away in Rasharkin, so I always kept up to date with things wherever I was in the world.

Looking at the talent at my disposal, I noted the three key men in my squad. My captain and former full timer Allan Jenkins plied his trade mainly in his homeland with Greenock Morton and the now defunct Gretna. The big Scotsman plays in centre midfield or behind the strikers and is a talismanic leader who chips in with his fair share of goals. The stocky left winger is the darling of Ballymena United - creative, brave and with a thunderous left foot - ‘Cush’ is a set piece specialist and is a frequent name on the scoresheet. He came through the club’s youth set-up before a brief stint at Lisburn Distillery before returning to Warden Street. 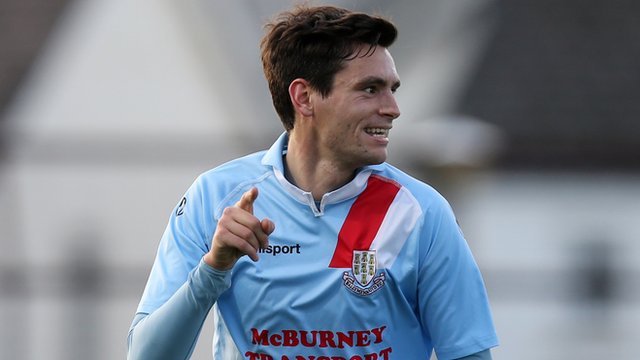 ‘Surgey’ is a local lad and coupled with a never say die attitude and determination, this makes him very popular with the fans. Predominantly a centre midfielder, he can play in defence or up front and has even filled in between the sticks for Ballymena!


I let my coaching staff take most of the session while I watched with interest. We had quite a big squad and a talented pool of youngsters but I could see instantly that there were players that weren’t quite good enough that I could do with shifting but I was prepared to allow everyone a fair crack in pre-season.

We were heading to the mainland next week to take on a couple of lower-league Scottish sides before welcoming Championship outfit Middlesbrough in a testing friendly - hardly the Far East and American pre-season trips I was used to - but it would give me a good chance to look at what I had to work with.

TheLuckOfTheIrish: Thank you so much for your kind words, that really means a lot!

In Northern Irish football, the Belfast ‘Big Two’ of Linfield and Glentoran have traditionally dominated but in recent times, Crusaders and reigning champions Cliftonville - also from the capital - have made the league more open.

The League is currently named the Danske Bank Premiership and consists of twelve teams which splits in to two mini leagues of six in April. 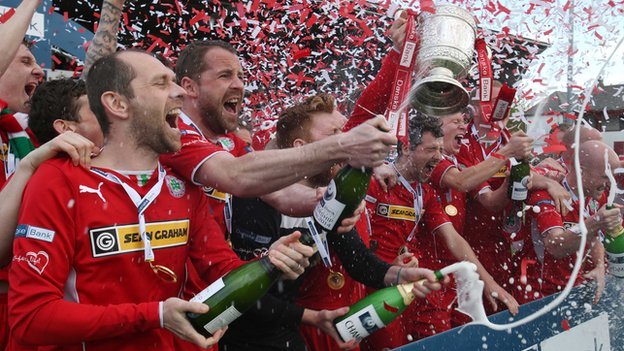 The bottom side is relegated to the NIFL Championship One while 11th place faces the runners up of the second tier and can win promotion along with the champions if licenses are met and grounds up to code.

A little known fact about the Irish League is that it is the second oldest football league in the world with the English League the only one formed prior.

Mid-Ulster sides Portadown, Dungannon Swifts and Glenavon are the most likely to fight it out with North Coast outfit Coleraine and ourselves for a Top Six spot, while Warrenpoint Town, Ballinamallard United and newly promoted Institute are favourites for the drop.

Linfield have picked up a massive 51 league titles and are thus the most succesful club in Northern Ireland.

You are reading "Please Allow Me To Re-Introduce Myself...".