C.J.Lippo
7 years
Icarus
Thanks for that mate, unfortunately it doesn't look like I'll be going anywhere soon...

C94z
7 years
Just read all this at once. Enjoyed it mate keep it going
Login to Quote

Thanks mate, glad you are enjoying it!

the champi0n fm
7 years
Hopefully some good performances in your national colours can get you into the worl cup squad and good performances there can earn you a move to a top flight team, for gods sake your;e too good to be playing in the Jupiler league ;).
Login to Quote

2015-05-09 03:18#212757 the champi0n fm : Hopefully some good performances in your national colours can get you into the worl cup squad and good performances there can earn you a move to a top flight team, for gods sake your;e too good to be playing in the Jupiler league ;).

Hahaha, yeah thanks mate. I think the problem is that FC Oss is a favourite club.

There has been interest but I always resign with Oss

After two record breaking seasons here at FC Oss I was probably due some misfortune & boy did I get it!

A grand total of 8 & a half months on the sidelines! Just about everything that could go wrong, did. Hamstrings, calves, hips & to top it all off, a broken collar bone.


My complete lack of luck saw me appear in a record low of 15 competitive matches for FC Oss.

When I was on the pitch I did ok. An average rating of 7.17 & 7 assists not a bad return from 15 matches but it just wasn't enough after the last 2 years had promised so much.


Once again, it was a decent year for the side. 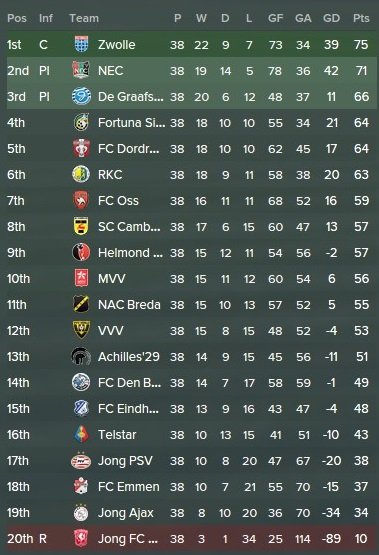 Again we managed to make the playoffs, although 7th position was a slight decline from last years 5th.

It made little difference as, for the 3rd year in a row, we went crashing out in the second round. I am starting to think we are just not destined for the Eredivisie.


For the first time in my career, I actually feel as though my game has gone backwards. So much time on the sidelines was never likely to be good for me. There is much work ahead to get back to my best, that's for sure!

C.J.Lippo
7 years
The call come late on deadline day. It was Mossy (Glen Moss, Melbourne Victory manager), an agreement for my departure from Oss had been reached.

Time was of the essence.

Looking back I think I was in shock but the terms the Victory were offering seemed to be fair so I agreed. I had no intention of staying where I was not wanted. In truth I couldn't quite believe what had happened. 12 months ago I was fresh from breaking consecutive single season assists records here at Oss & was being linked with moves to the Eredivisie & Belgian Pro League.

My future seemed bright & my adventure in Europe seemed to be just beginning.

Now, just a year later, I am preparing myself for the 20+ hour flight back to the country of my birth, another Aussie that couldn't cut it in the cut throat world of professional European football.

As I board the plane I am both bitter & depressed. Not only had Oss seemed fit to sell me after just one bad season but the fee! Oh my god the fee! 48.87K! They couldn't even round it off to 50?

Oh well, at least I am on my way back home. A plane to paradise really!

I will be able to see my family again.

Oh God! I will be playing against George! I haven't done that since the back yard at Tamworth! This may not be too bad. Ok, my return will not be triumphant but it may just be welcome. It just may be.....

For those of you who don’t know, Melbourne is the second largest city in Australia, & capital of the fine state of Victoria.

Situated at the mouth of Port Phillip Bay it’s population is a little over 4 million & it is often referred to as Australia’s most “European city” & the nations “sporting capital”.

As a New South Welshman, I can confirm that as Victorian propaganda.


Although like the rest of the country, football is gaining popularity, the main sporting interest around here is Aussie Rules. In truth the AFL it is more akin to a religion then sport in Victoria.

A bunch of burly blokes in short shorts chasing a ball around like mad men? I see what the ladies get out of it, but the men?

It has to be the only game in the world where you can miss the goal & they say “Oh well, close enough mate. Have a point.”

Perhaps I am missing something but, in any case, I digress.


The Victory are perhaps the biggest & most successful football club in the country, so in that regard I have definitely landed on my feet here. They will afford me the opportunity to win trophies & regularly attract 30,000 plus fans to their home matches. Not too shabby, all things considered.

The city itself is actually quite a beautiful place, though you can never tell anyone north of the border I said that!

Its perhaps less chaotic & a tad friendlier then Sydney, although as a simple bloke from rural NSW, there is still far too many people for my liking.

That’s the one regard in which I already miss Oss, but there is no time for regrets. Its onward & upward. Time to get my career back on track! Time to shine!

Sad about you not being able to cut it in Europe though. But, maybe you'll get a 2nd chance...

Love the analysis of AFL too.

My one bit of advice would to to marry a doctor, whos parents are a physio and strength and conditioning coach to sort those injuries out! Might need an agent in the family too after that disgraceful 48.87K fee!
Login to Quote

Feliks
7 years
Well at least you joined Melbourne Victory of all A-League teams...


My disappointing exit from the club aside, I still had an undoubted soft spot for the little club from the south of Holland. Despite Jupiler league coverage being non existent in Australia, I resolved myself to keeping track of their results. 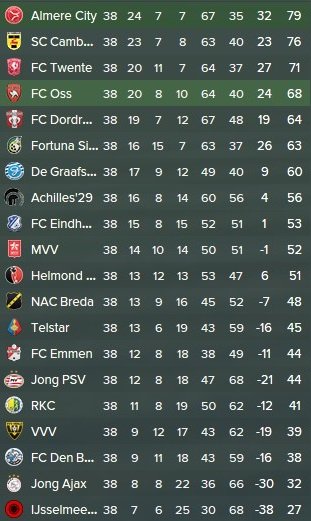 I was understandably excited when I learnt that the club had finished in a record high 4th position, once again qualifying for the promotion playoffs.

When the playoff news finally filtered through I found myself slightly conflicted. 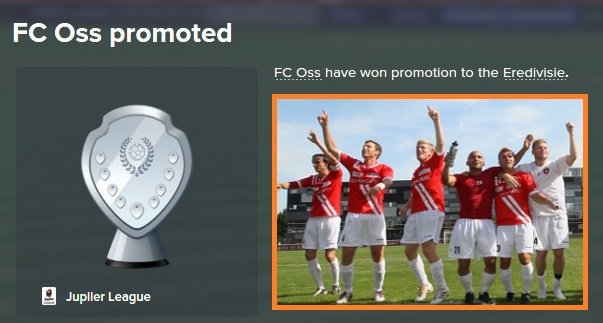 They had finally done it!

There was a tear in my eye.

After being so close for so long, the guys were finally headed to the promised land. The Eredivisie!

I was undoubtedly pleased for the boys but, perhaps selfishly, I couldn't help but wonder what might of happened if I was still there. Would I have been a help or a hinderance?

3 months out before a ball had been kicked in anger, what a surprise!

In my more pessimistic moments I find myself wondering if I am cursed.

In 12 years of professional football there has hardly been a year go by where I have not torn a hamstring! The poor things are hanging by a thread! Is it poor preparation? Poor management or just bad luck?


Despite my slow start it turned out to be a good year for both myself & the club.

Only the 14 league games but a very respectable average rating of 7.35 as well as 3 run outs in the FFA Cup, 6 appearances in the Asian Champions League &, more importantly, a recall to the national squad!

Honestly I thought my days representing my country were done when I returned back to Australia but obviously it pays to be close to home! 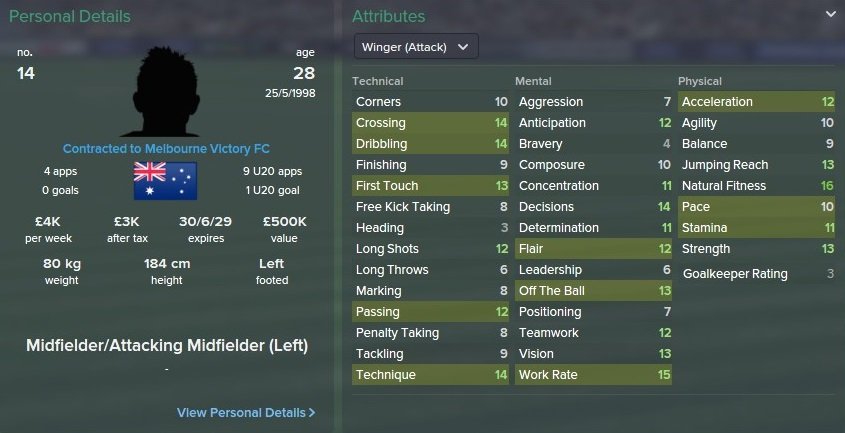 My game is far from its best but its not always how good you are but who you impress that counts I suppose.


As expected, the Victory once again proved to be a formidable proposition in the A-League. 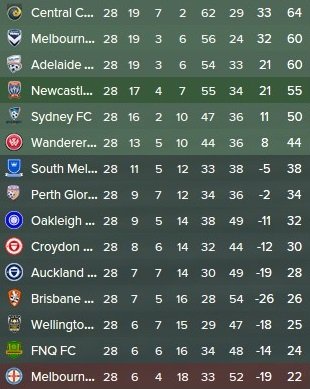 The regular season saw us finish in second place behind the Central Coast Mariners, who were superb all year.

The finals series saw even more joy for the club as we steam rolled our way past Adelaide United to contest the final against surprise packets, the Newcastle Jets. 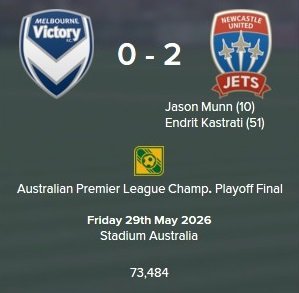 Unfortunately it wasn't to be our year as the Jets continued their impressive run to end our title dreams.

I wasn't there though but not for the reasons you might expect.....


You generally don't get too many chances to play in a grand final.

I was understandably disappointed to be letting my team mates down on their day of need but fortunately for me, I had a good excuse. 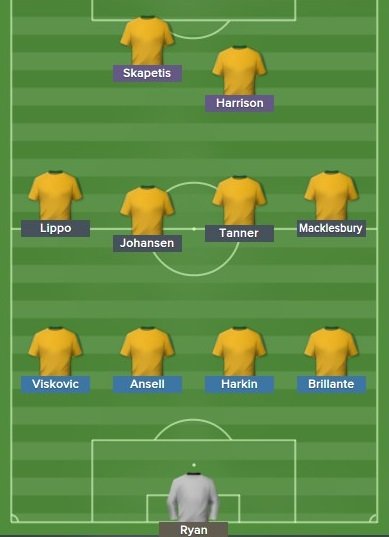 I had been made part of the Australian squad to contest the up-coming World Cup in Canada!


The emotion is quite unbelievable. I had all but given up on my dreams of again representing my country, let alone at a World Cup!

Isn't it strange how disappointment can so quickly become opportunity, if only you let it?! 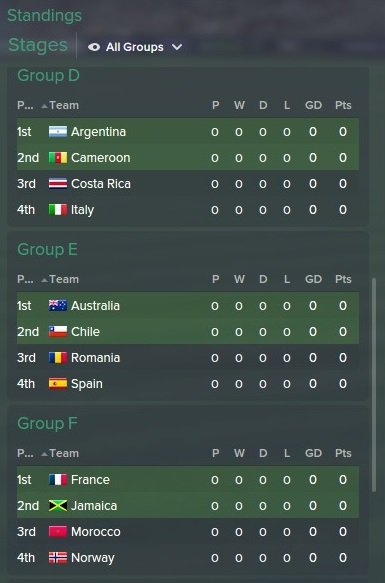 Something about this group seems familiar.

It will be tough, no doubt, but the chance to represent your country on the biggest stage on offer may only come once in a lifetime.

These are the memories we cherish.

These are the moments that make it all worth while. 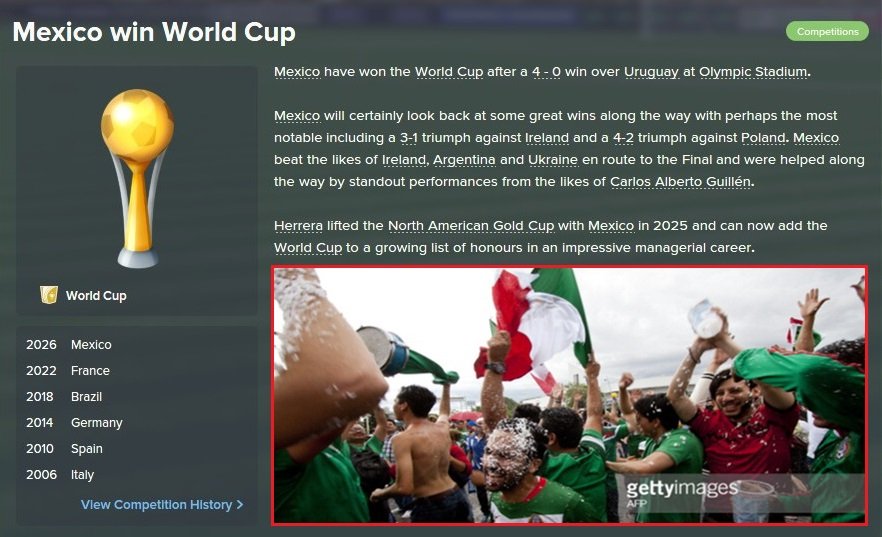 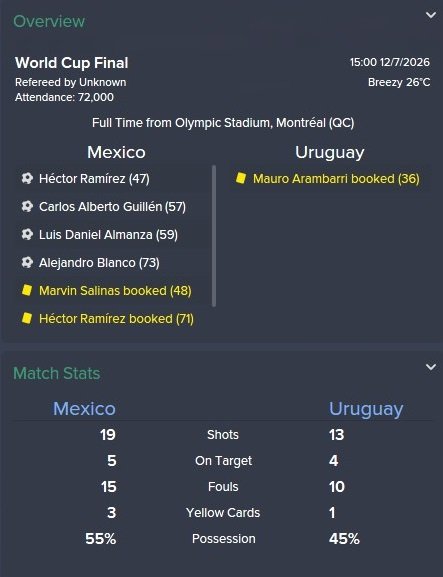 I think you could have named your own odds on picking that final. 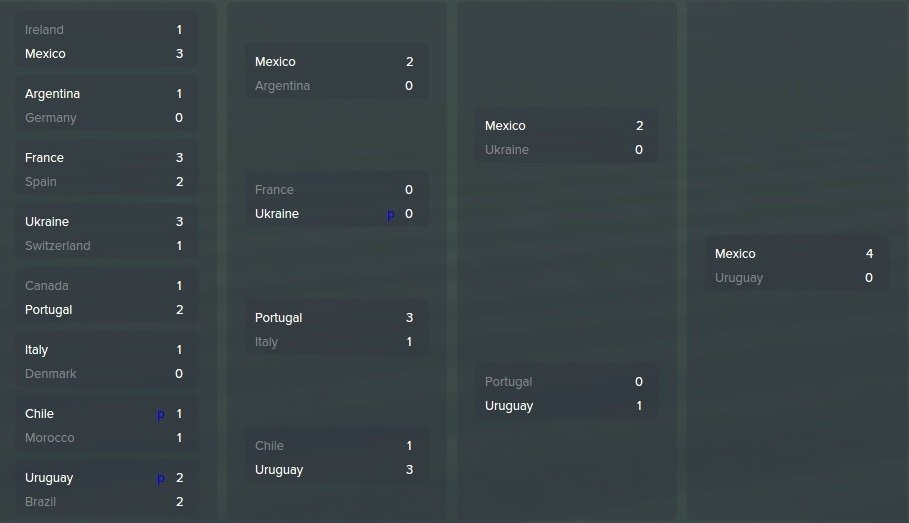 It seems as though the big boys all drew one another in the first knock out round & by the time the Quarters rolled around they were spent.

Some major upsets along the way! 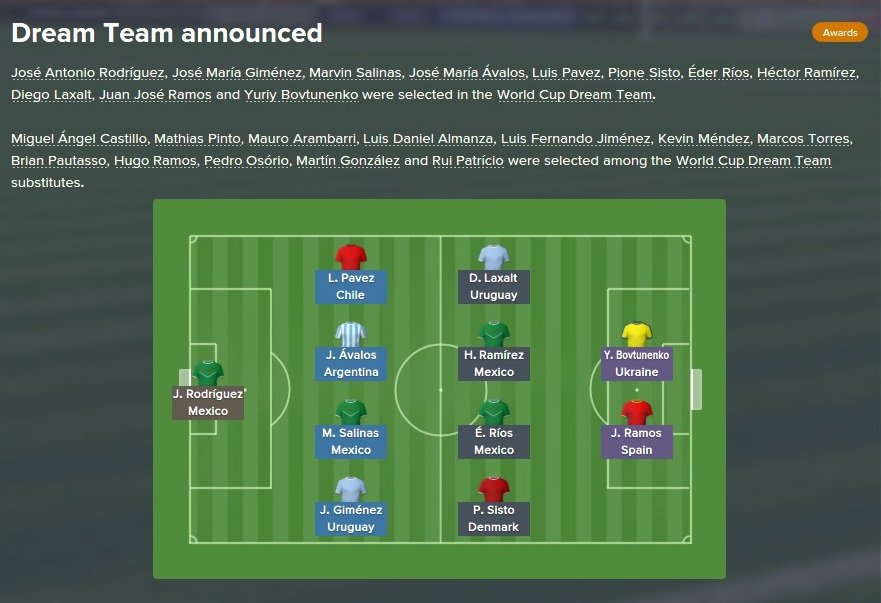 Unfortunately for us, we couldn't join the party. 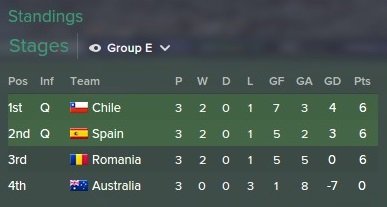 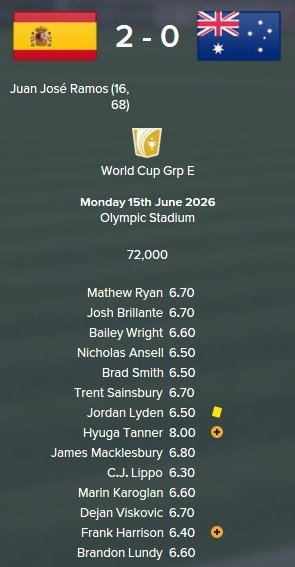 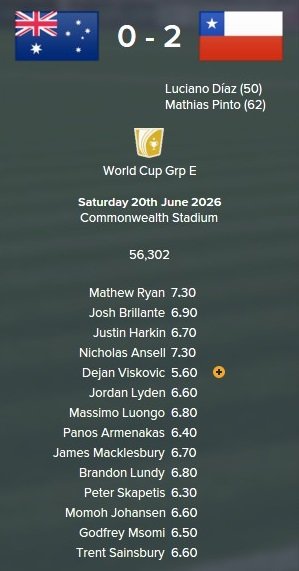 Another major tournament where the might of Australia fail to record a single point! The Spain & Chile results not unexpected, however our performance against Romania was the real low light. I thought we should have at least put up a better fight in that one.


Personally, I managed to appear in 2 of our 3 games as well as scoring our only goal of the tournament.

An experience to remember on that account, however our disappointing performance undoubtedly over shadows any sense of pride I feel at the moment. 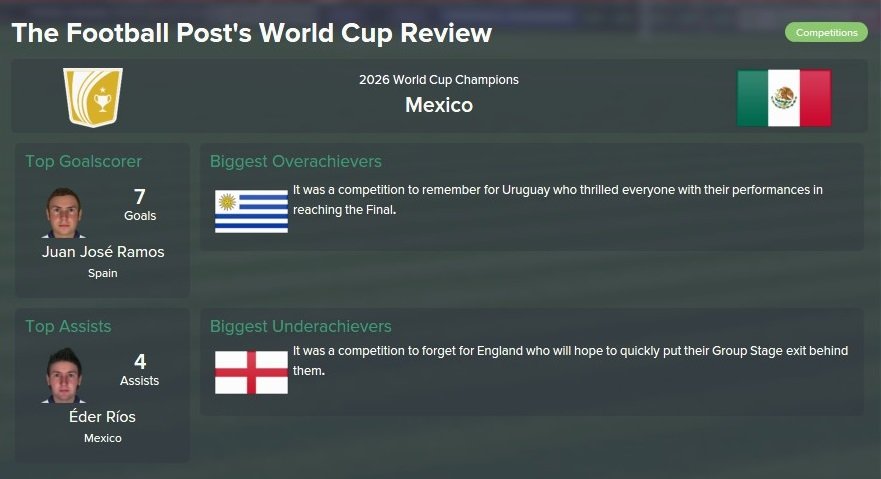 At least we weren't the biggest disappointments. England once again crash out early to take that title.


And that is that. A tournament I will look back on with a mixture of pride & embarrassment.

Not many people can claim to have scored a goal at a World Cup but now I can!

The disappointment at our performance will eventually fade but that memory will live forever.

& no doubt that goal will get more spectacular every time I recount it. :)

P.S. How did you get the idea in the first place? Does anyone else play like this?
Login to Quote