'Hard Work, Does Pay Off' 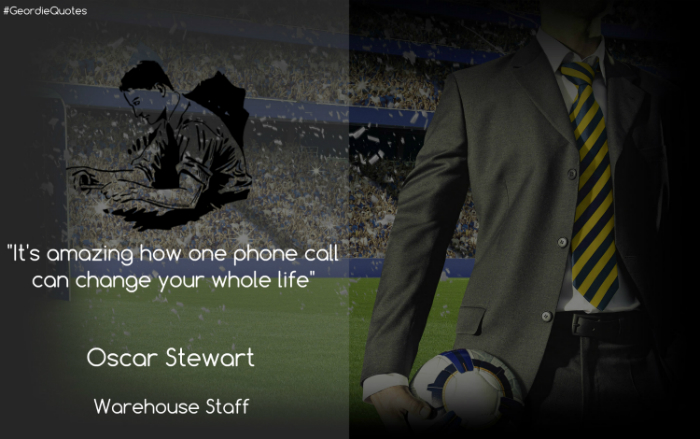 In a short there wasnt really much to know about Oscar. He was a working man with a Wife (Melissa) and his son and daughter (Jake Stewart & Francine Stewart) and worked your average 40 hour week at a warehouse just outside of Dunswell. His day involved a 6:00 am wake up followed by a shower, shave and brush before supping a piping hot coffee and leaving the house for 7:00 am. He would arrive at work around 7:28 am via the East Yorkshire Bus from Hull to Dunswell before clocking in and starting work at 7:30 am. precisely. As a 35 year old man Oscar knew his dreams of ever being a professional footballer had come to an end somewhat 10 years ago despite his 1 year at North Ferriby United as a U16's player. But it never stopped him watching the game, football was his religion and he followed every live televised game on Sky Sports then later on watching Match Of The Day and The Football League Show. Oscar followed his home Club Hull City and was now watching them grace the heights of the Premier League thanks to Geordie man Steve Bruce and Egyptian owner Assam Allam.

During his youth days Oscar spent every minute of his free time playing football whether it was with his friends or on his own, if you gave him a ball he would practice. When he was around 17 Oscar started studying for his coaching badges, first gaining his FA Badges then progressing to a National C License. Lucky for Oscar his parents were very well off and covered the extortionate fee's of his courses. Upon completion of his C License he then aimed for his B & A Licences and after a swift 2 years he achieved that height. At the age of 20 Oscar held a National A License to his name and pushed himself to progress further. It was at this time his Parents wallets really took a hit as it would cost almost £10,000 to complete his Continental C License. After 1 year Oscar completed his Continental C License at the cost of £10,000 and moved himself on. His Parents covered the cost of his B & A Licenses before drawing the line there. Oscar needed to garner £50,000 to cover his final course fee to gain his Continental Pro License but never found the money and gave up on his dreams at the age of 24.11 years later and he was working in a Warehouse, what went wrong he? asked himself looking back. It was only until tonight that Oscar would finally get the chance of his dreams.

It was around 7:25 when Oscar's phone blurred out the theme tune to Match Of The Day. Unknown Call the phone displayed but Oscar answered anyway, it could be important.

Oscar: Yes it is, can I ask who is calling?

Unknown Caller: Hi Mr Stewart, my name is Mike Ashley and I was wondering If your free on the 27th to attend an Interview for the role of manager at Newcastle United.

Oscar thought it must be a piss take and that one of the lads most probably Darren was behind this prank call. He had pranked him in the past and he wasnt falling for it this time.

Oscar: Okay Darren, very funny, I'm not in the mood for one of your piss takes again.

Unknown Caller: I can assure Mr. Stewart that this no Joke, we was sent your resume by a James Bridge, If that rings a bell?

James was an old friend who lived in Hull, we grew up together before he moved away to Newcastle with his missuses at 25. Surely he couldn't of sent it in to Newcastle United.

Oscar: Yes that does ring a bell, so this isn't a joke then, you really want me to be be a candidate?

Mike Ashley: No, I can assure you that this isn't a joke, Are you free on the 27th Mr Stewart?

Oscar: Yes that's fine, I would love to attend and thank you for calling

Oscar hung up the phone and sank into the couch, his mind had not yet processed what had just happened. He jumped up and cried with pleasure at what had just happened, Melissa ran into the room to see what was going on and Oscar explained "I've got a job interview with Newcastle United to be the next manager". Melissa ran to him and hugged Oscar wiping the tears of joy of his face. Later that night he laid in bed thinking to himself. In 3 days he would be travelling to Newcastle to meet with Mike Ashley about being the new face of Newcastle United, That night Oscar never slept a wink.

LLMCrumble
6 years
Brilliant start to the story and I can't wait to see what happens next in the life of Oscar!
1
Login to Quote

OMGItsToddzy
6 years
Thanks LLM, It should be interesting

DarylG
6 years
this looks real sweet will be checking up on this! good work keep it up mate!
Login to Quote

Glory
6 years
Good start, I'll be reading! The Newcastle job is a very interesting one.
Login to Quote

hope Ashley doesn't mess you around
Login to Quote

No1VillaFan
6 years
i gotta say, newcastle can be a great story! i will follow
Login to Quote

The Motivated One: Thanks, So do I, always nice to have a follower of the club

No1VillaFan: Thanks Jason, I hope you enjoy it 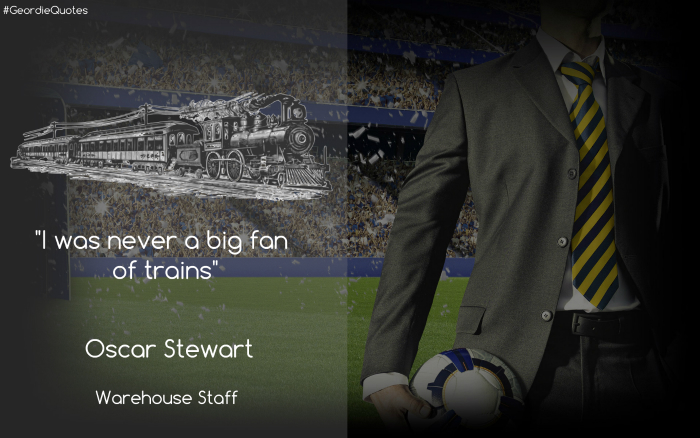 Upon arrival at Hull City Bus/Train Station I must admit I was feeling a little nervous. I stood in line waiting to pay the extortionate fee's for my train ticket to Newcastle and be on my way. After what felt like an eternity waiting I was next in line for my inquiry, Walking up to the desk I was greeted by a face that was so dull it made Hull look like Spain and that's saying something. I calmly asked her how much a ticket to Newcastle and back was and then she just paused and stared at me before replying with a bite "£180.00 please" I didn't take well to her tone but nonetheless I had to hand over my hard earned cash. Walking from the ticket office I spotted a small stationary store, T"hat must sell pencils and A4 paper" I thought to myself. I made my way to the small cafe like shop and entered, after grabbing what I needed I proceeded to the cash register where I was once again robbed of my cash. After scanning an A4 booklet and a pack of pencils the price amounted to £8.62p... Of course... where in a train station If there is anything overpriced in a city it has to be the f***ing train station. At the end of the day all this expenditure wouldn't matter If I got the job and I was feeling very confident. I took my seat on the train and opened my bag pulling out my booklet and pencil, It was time to get down to business.

About 30 minutes into my Journey I had already come up with a tactic for the Newcastle team, And of course I had my encyclopedic knowledge of every teams squad thanks to a little computer game called Football Manager. If i'm completely honest, it's probably the best £30.00 I've ever spent. I had drawn a diagram of the formation I would be playing.... a 4-1-3-1-1, this formation had everything for me and suited the players I had at my disposal. I would be playing my Full Backs on support and my Center Backs would stay put in the middle, Colback would be playing as a Defensive Midfielder with Tiote playing just in front of him. On the right of Tiote would be Sissokho and to the left Anita, It was full proof. I had Cabella playing as a Trequartista as he was versatile and could play very well as a play-maker and finally up top it had to be... no not Cisse but Ayoze Perez. Ayoze had talent and he was young he could score goals and he fit well into the team, for me Cisse just didn't slice the bread and if i'm honest I would probably sell him given the opportunity. Working out the formation was only half the task, I had to thing what mentality I would deploy alongside how I would have the team shape. After carefully planning it I had decide it was best to deploy an attacking mentality alongside a flexible team shape to allow full communication and co-operation between the team when attacking and defending.

Before I knew it I was in Newcastle, home of the Geordie. This was my 3rd visit to Newcastle and I remembered it fondly from when I came with Hull City. I caught a cab and to St. James Park it was, I was more nervous than ever now as that in a matter of minutes I would be meeting with Mike Ashley about possibly being the next manager of Newcastle United Football Club. It took a very short 10 minutes to arrive outside of the famous stadium and I must admit I was sweating. I dusted off my black suit and walked through the doors where I was greeted by the receptionist who asked me...

Receptionist: Hi there, how can I help you?

Oscar: Hello, I'm here for a meeting with Mr. Ashley.

Receptionist: Okay you must be Mr. Stewart, yes If you walk through that door to your left and up the stairs its your first door on the right.

Oscar: Okay, thank you very much.

I tell you this, walking up them stairs was the most heart pounding experience of my life, I somewhat wanted to walk through the door and it be a big joke, I felt sick to my stomach. I approached Interview Room 2B and knocked on the door, a muffled voice from within said "come In". I walked in the room to find that it wasn't a joke and sitting before me was Mike Ashley himself, with a big colgate white smile on his face ready to interview me.
Login to Quote

DarylG
6 years
really enjoying the detail put into this! keep it up mate!
Login to Quote

LLMCrumble
6 years
Great detail, but check over your work, couple of mistakes but of course, it's natural

You are reading "Oscar In Geordie Land - A Working Man's Story".