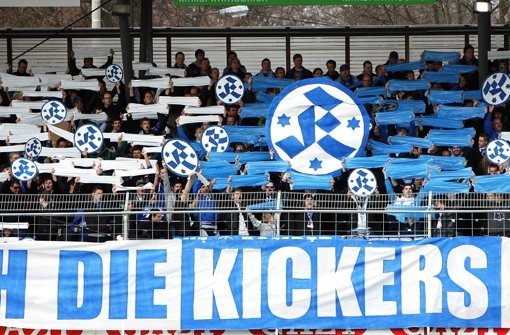 In its early years the club had a decent local squad that played in the Südkreis-Liga, Kreisliga Württemberg and then in the Bezirksliga Württemberg. With the reorganization of German football during the Third Reich in 1933, the team – now known as SV Stuttgarter Kickers – found itself in the Gauliga Württemberg, one of sixteen top tier regional leagues established in the country during that time. It continued to have good results locally, but was unable to impress beyond its own area. In the final year of World War II the Kickers fielded a combined wartime squad with Sportfreunde Stuttgart.

After the war the club resumed play in the Oberliga Süd and performed as a mid-table team early on. By 1950 it had slipped to the lower half of the table with a seemingly solid grip on 14th place, constantly struggling to avoid relegation throughout the decade. Kickers spent the early 60's in tier II football, but after the formation of the Bundesliga, Germany's new professional league, in 1963, the club was moved to the Regionalliga Süd. In 1974 that league went professional and became the 2.Bundesliga. Between 1963 and the late 1980s the team had varying results, but finally stabilized in the upper half of the standings toward the end of that period. It has one losing appearance to its credit in the German Cup in 1987 and in 1988–89 it made it to the Bundesliga for the first time. It ended a run of 28 years as a second division outfit. The team was immediately relegated after a 17th place finish, but continued to deliver some of its best performances. Die Blauen advanced to the semi-finals of the 2000 German Cup and then had a second turn in the Bundesliga in 1991–92, but with the same result as its earlier time up. Over the next decade the club played largely in the second division, before slipping to the Regionalliga Süd in 2001, where they remained until 2008, when a tenth place finish narrowly qualified them for the new 3. Liga. They finished last in the 3. Liga in 2008–09 and were relegated to the Regionalliga Süd. After three seasons at Regionalliga level Kickers returned to the 3. Liga in 2012 where they now play, finishing eighth in 2013–14.
Login to Quote