BackPostHeader
5 years
After some unsuccessful attempts at writing an Football Manager 2016 story have decided to give it one last go, with the club I support. Manchester City.

It was a difficult 2014/15 campaign for City, after winning the Premier League in such a fashion the previous year. It was another poor title defence, in a season where so much was expected the squad failed to produce enough. There were heavy rumours linking Manuel Pellegrini with the exit door, receiving a mixed reception from supporters. With some (including myself) wanting him out after his one dimensional tactics, poor signings and poor big game performances (just one win against the other top four teams, a 1-0 home win over Manchester United), others wanted him to stay.

He stayed on and things looked good until a 2-1 home defeat to West Ham, followed by a 4-1 away mauling by Tottenham Hotspur. Now having been defeated 4-1 again, this time at home to Liverpool, and a cagey Manchester derby performance which ended 0-0 he is again being doubted. With rumours of Josep 'Pep' Guardiola having agreed terms with the club.

This story will not see the Spaniard take charge, but myself. I'll hope to take the club to new heights whilst developing an English core and bringing in players through the youth system.

Hopefully this story will last and be a good read along the way!

After much speculation, Manchester City manager Manuel Pellegrini has been relieved of his duties at the Etihad Stadium.

City chairman Khaldoon Al Mubarak has spoken of his fondness for Pellegrini, but admitted that the Chilean had not sufficiently met club targets for the 2014/15 season.

'The Engineer' won the Premier League and Capital One Cup in his first season, but his City team failed to live up to expectations the following campaign. Finishing eight points off champions Chelsea. Despite snatching 2nd place from Arsenal, The Citizens disastrous spell through February to April will be remembered as the games where they went from competing with Chelsea, to fighting for an automatic Champions League spot.

Pellegrini has also spoken of his love for the club. Saying he wouldn't change his experience, and that he was so happy to have won he had with the club, there are several names in the hat for the job of being City's new boss. Most notably, Pep Guardiola and Diego Simeone, the betting odds for City's new Head Coach are; 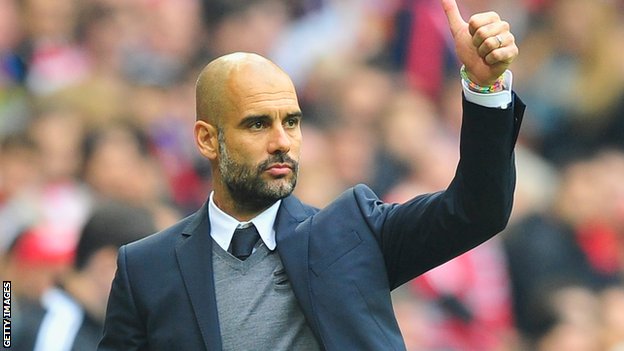 kingpin_blue
5 years
Good updates so far. My bet is Guardiola
Login to Quote

Thanks Jack, your comments always bring a smile to my face!


Manchester City have wasted no time in announcing their new head coach, with the signing of 31 year old Moroccan Omar Jones as their new manager.

Despite Pep Guardiola and Carlo Ancelotti being strong favourites for the job they've taken a huge gamble by appointing the rookie coach, who will become the youngest manager in Premier League history this season.


http://www.bolaskor.com/wp-content/uploads/2014/04/Pep-Anclelotti.jpg
Ancelotti and Guardiola were the favourites for the job, but City opted for Laska.

Chairman Khaldoon Al Mubarak was quick to smooth over supporters' concerns by giving his reasons for the appointment.

''We believe that Omar is a great young coach, who can utilise the facilities and be the leader of Manchester City for the future.''

''He spoke with us and Sheikh Mansour about his philosophy and where he sees the club going and we were very happy with what we saw in him for the future of the club.''

The appointment of Jones has sent shockwaves through football, with this representing an enormous risk for the Citizens. Al Mubarak has promised a summer of big additions by the Moroccan, it remains to be seen if Omar Jones can become the next great manager in world football. But he's certainly set up well for it.
Login to Quote


Manchester City's new head coach, Omar Jones has announced his first signings at the Etihad Stadium. Leed United's Sam Byram and Tottenham Hotspur's Danny Rose have signed the dotted line in Manchester, adding quality and youth to the full back area of the City squad.

Byram will be loaned to back to Leeds to gain more first team experience.

Sam Byram was the first player to sign in the Jones era, in a £7,000,000 move from Championship side Leeds United. Having been highly rated in the Football for league ever since his breakout 2012/13 season he's been a target for several Premier League clubs but Jones acted quickly to tie up the deal for the York born full back. Seen as a long term replacement for Pablo Zabaleta.

Buw with Bacary Sagna and Pablo Zabaleta already the first team right backs he's been loaned back Leeds for the 2015/16 season to gather more first team football, before joining up withe first team next summer.


Danny Rose was the next player to join in a £12,500,000 deal from fellow Premier League side, Tottenham. Rose has developed into one of the league's best left backs, and will look to build on his 39 Under-21 caps for England and earn his first senior cap. Rose looks set to be part of the City backline for several years to come.

Another player to come through the Leeds United academy, and at only 25 looks set to be the first choice City left back for several years to come as Jones looks to build an English core to the Manchester City starting eleven.
Login to Quote

Jack
5 years
No! You took our Byram!

He'll do well for you, though, as will Rose. I'd have a look at Lewis Cook as well if you want to completely destroy Leeds

He'll do well for you, though, as will Rose. I'd have a look at Lewis Cook as well if you want to completely destroy Leeds

Haha, I'm not looking at Cook yet. I want to destroy Leeds slowly...

NAVAS AND CABALLERO EXIT, BENDER SIGNS, REUS TO JOIN TOO? | The Transfer Target


''Alright Blues, Adam here for Blue Moon Rising TV. And welcome back to another episode of the transfer target. It's episode 12 and we've got some big rumours from Germany, but we start with two players that have left the club.''

''Willy Caballero has left City for Fiorentina, for around £2,300,000. Considering how poor he was last season, I think this is a decent deal. But now we only have Joe Hart and Richard Wright in the squad so the newspapers are linking us with Real Sociedad's Geronimo Rulli and Everton's Tim Howard as backup fro Joe Hart.''

''Jesus Navas is another player to leave, for Tottenham for £16,000,000. We've made around £1,000,000 profit on him and he's been a decent servant for the club. I don't think it was good to sell to him to a team in the Premier League though. But I think getting a profit on him was good, and hopefully we can reinvest the money into the squad.''

''We have made our third signing of the summer in Borussia Dortmund midfielder, Sven Bender. He was transfer listed by their manager, Thomas Tuchel and looks like an absolute bargain at £6,500,000. He's a tough tackling midfielder, very combative, and can provide good backup for Fernando as well being able to play at centre back.''

''Now we told you that there were rumours from Germany and City have been linked with Borussia Dortmund attackers, Marco Reus and Pierre-Emerick Aubameyang. Now we're not the first club to be linked with them, but apparently Omar Jones is a massive fan of Reus and Reus wants to move to a Champions League club with Dortmund playing Europa League football. And rumour has it that a bid of £30,000,000 or more will convince Dortmund to sell. And it is hoped by the board that their friendship will enable us to get both of them. We're also being linked with Schalke's Maximillian Meyer as a replacement for Samir Nasri, he's already an experienced player in the Bundesliga and he's only 20 years old but is one of Schalke's key players so prizing him away will be difficult.'' ''That concludes this weeks episode of the transfer target, and I'll see you tomorrow for episode 13.''
Login to Quote

Jack
5 years
I think Blue Moon Rising TV is a great feature for the story, keep it up, man!
Login to Quote

You are reading "Manchester City; The Boys In Blue".