Liverpool, you legends. I, a young lad at just 18 years old, had managed to play 8, 8 games in the Barclays Premier League! I also scored 3 goals in that time! 2 coming against Bournemouth, and 1 vs Fulham. I played well in the FA Cup in my 3 games there, but I couldn't get a goal. I always seem to be on form in the Capital One Cup, with 4 games (3 starts), 2 goals and 1 MotM game! I keep forgetting I still qualify for the U21s AND the U18s, but I played 13 games in the U21 league, scoring 5 goals and getting an assist in that time. I've gained more Wales caps than ever now, becoming a regular in the side, getting double figures in apps overall. I can now play well as either a Complete Forward, or an Advanced Forward, which enhances my chances of playing more! I'm yet to make the jump up to the 1st team though, still sticking in the U21 teams. I have had another wage rise, to £17k a week, which is a LOT of money, but tiny in footballing terms! My value has skyrocketed, launching up to £4.4m, which must mean I'm a decent player at least! One last thing, I'm apparently labelled an 'Enthusiastic Striker', which is awesome! 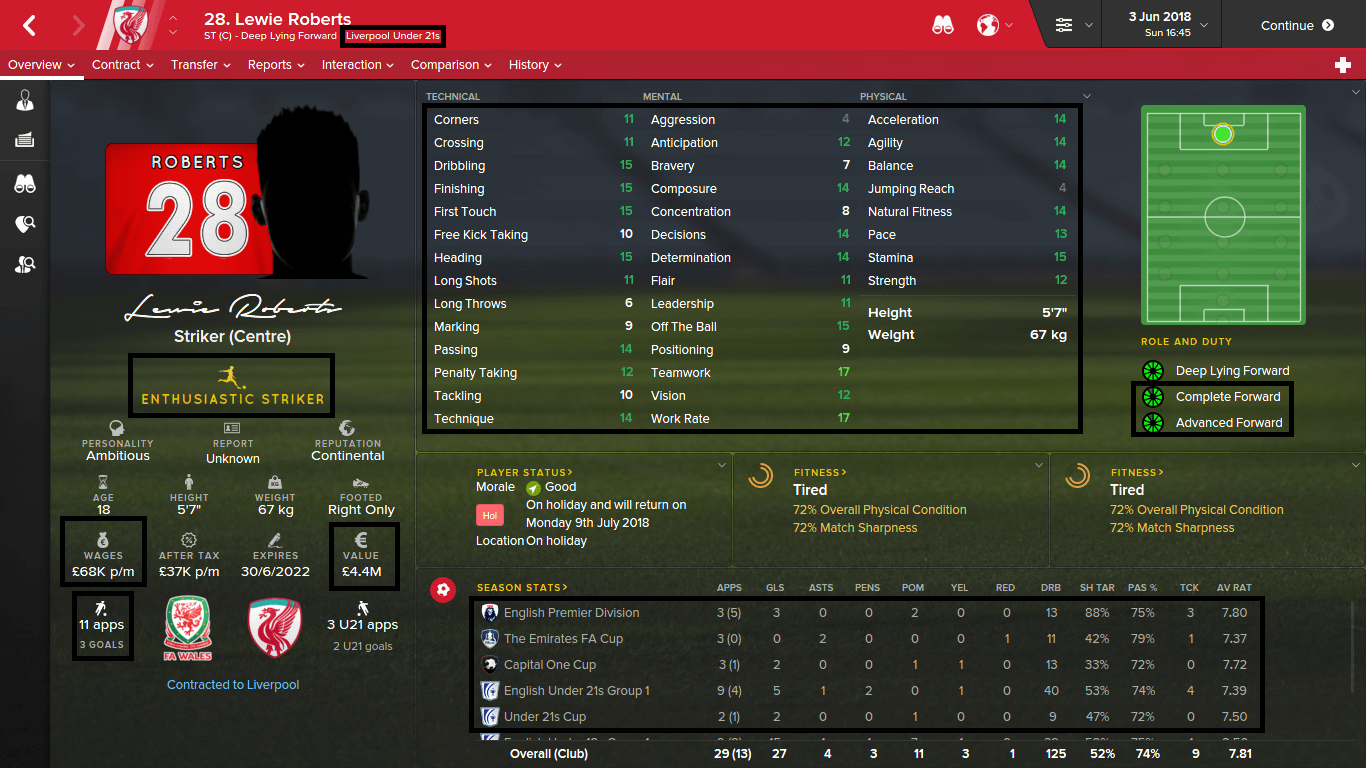 Levz
6 years
Nice story, keep it up!
Login to Quote

Live For FM
6 years
great start..... will you be one VILLA DESTROYERS(Liverpool)'s best prospect??

Europe is coming. I made my debut in the Europa League this season, but I performed mediocre. My PL apps went down, only making 1 start and 7 subs, performing even worse there! National Cups seem my speciality at the minute. I starred in the FA Cup, scoring 5 in 3 (1) apps and with an average rating of 7.53, I have proven myself well in the FA Cup. In the Cap One Cup, I scored 2 in 4 apps, getting a good average rating of 7.17. I've become a mainstay in the Welsh team, earning 18 caps and scoring 5 goals (+7 caps and +2 goals from last year), which is a dream for me. I'm still labelled as 'Enthusiastic', which is great. Also, I'm now known across Europe, so people now recognise me from Portugal all the way to Denmark! I seem to be capable of playing in numerous roles, which can only be good!

See ya for now, 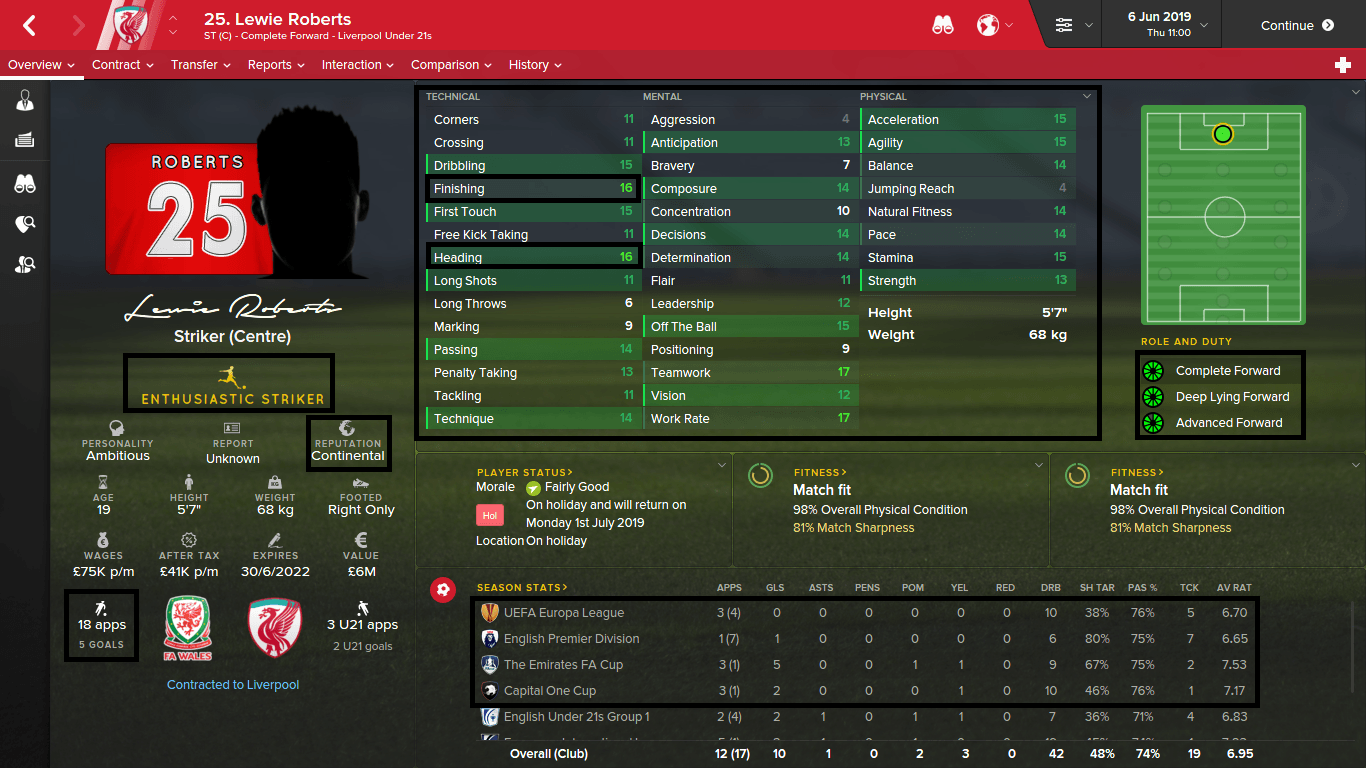 (I figured I would continue this story as well, since it was a decent one. Hope you people who didn't notice this short-lived story before read it now!)
Login to Quote

Balik
6 years
No statement on why you were afk for 4 months? YOU ARE A DISGRACE TO STORY WRITING!

YAY WE GOT MENTIONED, great update!
Login to Quote

Justice
6 years
Good season for a young player, it has to be said.
Login to Quote 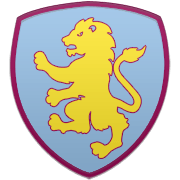 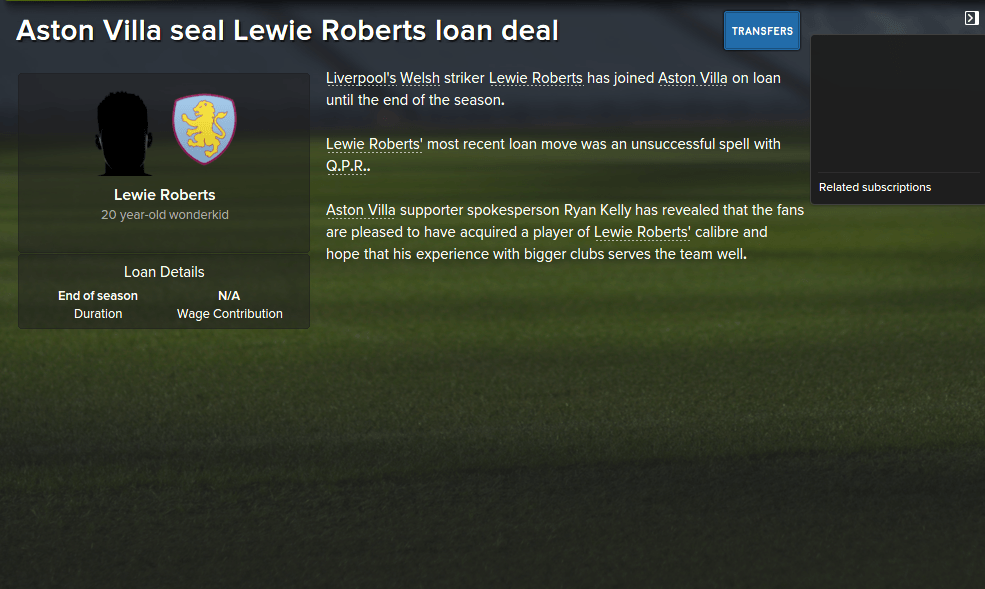 You said the exact same thing, just with

This season was about development and gaining BPL experience, and boy did I do that, with 28 (2) apps this season. My 10 goals isn't bad at all for a kid just starting the BPL life here. The media have been hyping me recently after my good season for A. Villa, labelling me as a 'Wonderkid', and I'm not sure if I can cope with the pressure... My Wales career has really taken off as I head to Euro 2020, with a quarter of a century of appearances for Wales, and 10 goals. (A goal every 2.5 games, and +7 games and +5 goals from last season) My stats are slowly ticking upwards, but at 20, I'm not a teenager any more, so I don't see my development getting much further after next season I'm afraid... 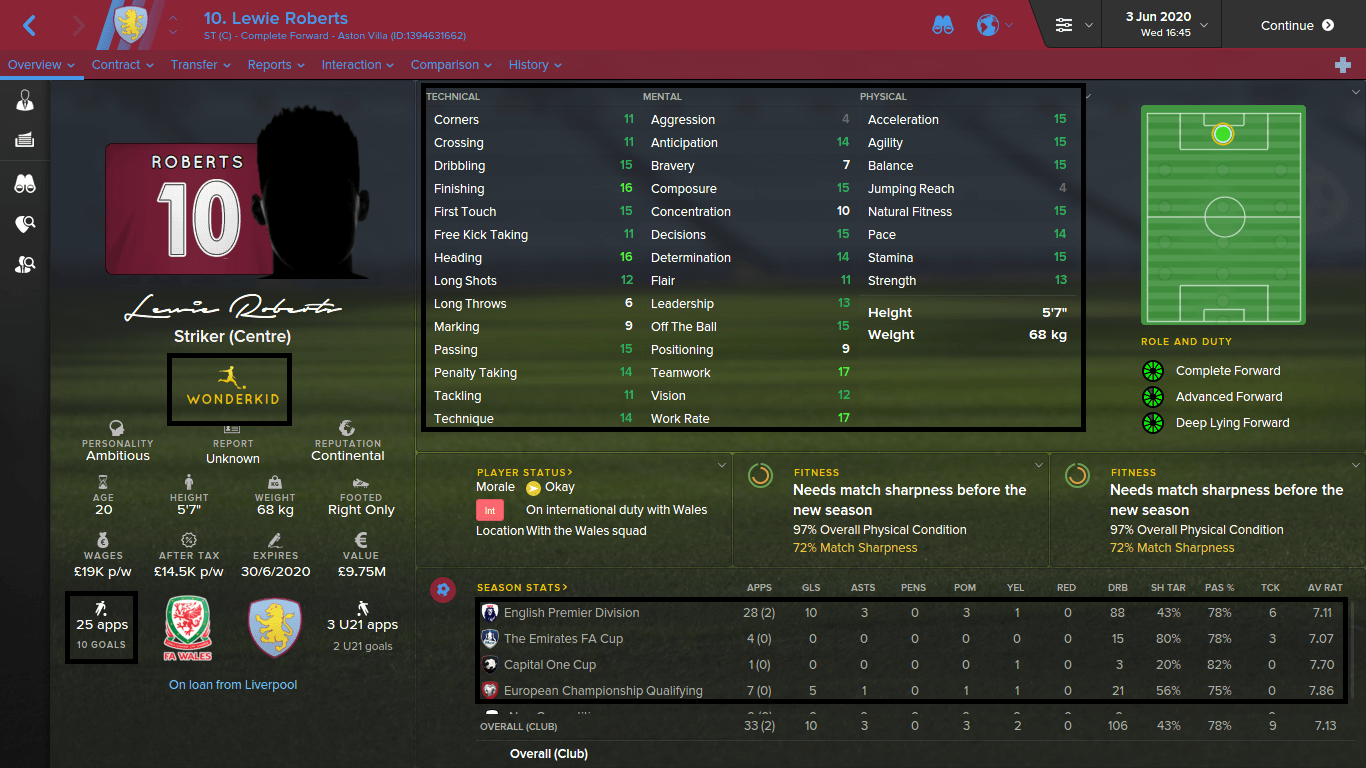 AuthoR
6 years
Developed well, but 25 caps at the age of 20 is no small feat!
Login to Quote

You are reading "Lewie Roberts - A Career In Football".