tenthreeleader
6 years
Really a fun save, MJK. Enjoying the read and thought I would weigh in. Well done!
Login to Quote

Michael
6 years
Come on, destroy that league
Login to Quote

C.J.Lippo
6 years
Congrats on knocking the Kiwi's off their perch! Bet you feared the worst when they scored that soft first goal but your guys did magnificently to turn it around!

Now for some more league glory!
Login to Quote

Doing tremendously well in the league too, congrats
Login to Quote

Michael I will only if you give me some regens

C.J.Lippo That match was too intense, still can't believe I won

Justice Thanks man
Login to Quote

For this update we have decided to include two months as June had only one match. it was a very successful month for the club as they continued their amazing form. The only disappointing spot came on 15 May against JS Baco. This match ended up in a 2-2 draw that seemed to frustrate the club all game. "We just couldn't get anything right that match, we as a whole can't believe that we played bad," said Gauthier about the draw. The only match in June was a big success as the club won 4-0 with all four goals coming from Jamal Kabeu. Currently we are on top of the league by five points. 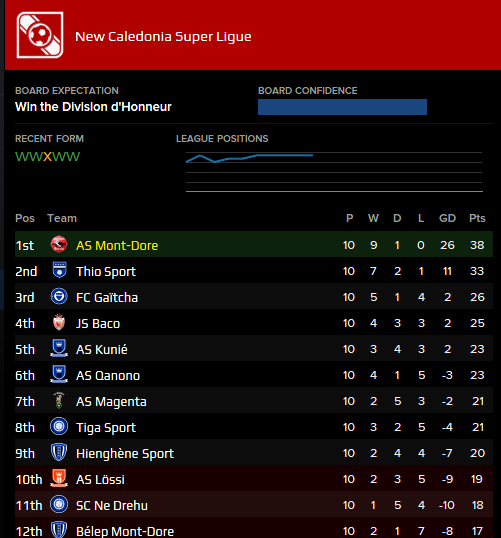 We will now be showcasing the match of the month. Here is the highlights from our only match in June. It was a great match for Jamal Kabeu as he scored four goals. This was the most amount of goals for anyone at the club in a game.

Before moving on we would like to congratulate Damien Morin, Jean-Baptiste Gauthier, Alex Clement and Eric Pacal for getting called up to the national team during the OFC Nations Cup. New Caledonia made it to the final but sadly lost in the final against New Zealand by a score of 2-0.

Finally on June 20th the club got a notification by the Fédération Française de Football stating that the club will be in the Coupe de France for the upcoming Coupe de France season. We will be entering the competition in the 7th round on 12 November, the opponent is still TBD. July will be a semi busy month with two matches and the transfer window being open during the month.

ScottT
6 years
Congrats on beating a side from New Zealand, a step forward for New Caledonia in terms of that and getting to the final of the Nations Cup!
Login to Quote

Well hello there, this is my first journal entry. I might not the best at expressing thoughts but I have decided to do this. The reason is that I want to keep a tab on my personal thoughts and all of that with my coaching career. You never know I might become someone someday and these will help with writing a book or an account to my coaching career.

The first thing I want to cover is how I am now used to New Caledonia. in the beginning it was a struggle as the time change was so massive and being in a different hemisphere really fucked with my body. Seriously it was weird that July is winter here. Now the big thing is when I return to Europe I have a feeling it will be hard adjusting. Other than that the people are lovely and this is a beautiful country.

On the team side of things I could not be happier with our progress. It has amazed me how good this team has been especially in the O-League. Like I will not lie I thought at first we got lucky at the end of the season. I guess not and my "lack of experience" doesn't mean shit. Thanks to all that I have studied I can easily say I have the upper hand.

One thing of interest is that I was approached by Japaneses club Júbilo Iwata to become their next head coach. Well I did interview and it went well. The thing is that I had no intentions of leaving this club. To say they were pissed is an understatement. Well at least know my name is starting to make some waves.

Anyways my contract ends at the end of December 2017. I have been thinking if I want to renew or not. The big thing is I am almost ready to move on but at the same time there are still things to get done. The one thing that could keep me here a little longer is if we become professional. Yes that is right, a pro club. The board is considering that at the start of either next year or the year after that.

Well that is it for now. I have no clue when the next time I get to write again is but until next time!!!!
Login to Quote

InvertedWingbacks
6 years
Great update man, keep it up! Great to see how well this is doing!
Login to Quote


I want to thank everyone who has been reading this story and joining in the conversation. It has been a few years on FMScout since I had a story go this far and i want to thank you all!!! Here is to 100 more comments!!!!
Login to Quote

As usual July was a relatively short month for the club with only two league matches this month. In the two matches the club out scored the opponents by a score of 10-1. it was a great month for striker Jamal Kabeu who scored three goals during the two matches. The club is still in first place with an eight point advantage over Thio Sport. The match against AS Magenta where we won 6-1 is our match of the month. It was a debut match for three players who we will discuss later on in the transfer section. New signing Romain Dedola scored his first goal for the club in the first minute of action. This is a new club record. Below are the highlights.

Next month will be very busy on the schedule with both league and cup matches. Back in mid July the announcement for the first round of the cup drew us against AS Quanono. The match is set for a 17 August date and will be at home. Here are the rest of the matches for the month of August.

This transfer window was quite busy as the club added three players. All three have had experience in the French Lower Leagues and are excited to play for us. The key reason they were signed was to assist in the upcoming several matches including the Coupe de France and Club World Cup. On the departure side there were five players departing. Most were youth players and are not shown in the departures section due to that. Below are the major transfers for the Summer 2016 window....

mgriffin2012
6 years
Top of the league and going strong! Should be title #2 coming up soon!
Login to Quote