Jack
6 years
Nah, this is way too easy for you

August was another successful month for our club. During this time the team kept up the run towards the championship. Currently the club is 10 points in the lead with a total of 62 points and should have the league wrapped up in the next few matches. The match of the month comes against Gaïtcha in a 6-0 thrashing. Below are the highlights. 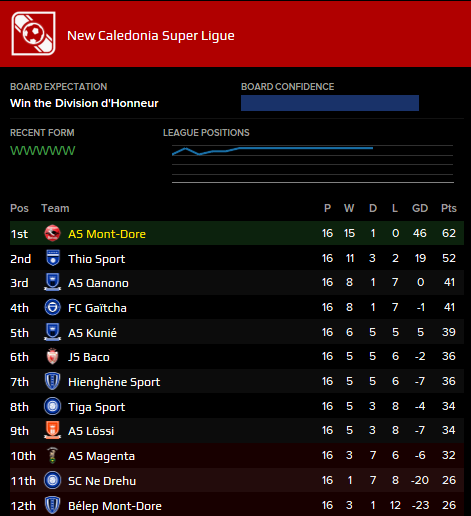 There was only one blemish to the month and that came in cup play. Sadly the club lost the first round match against third placed AS Qanono by a score of 1-0. The only score came from a penalty kick after a handball occurred. “Yes I am very disappointed as this is the second year in a row that we failed to advance far into the tournament, but that helps us focus on the rest of the season,” said Gauthier

Below is the schedule for the next two months. During this time the club will be wrapping things up.
Here is the upcoming schedule:

Justice
6 years
That goal difference is tremendous!
Login to Quote

The last two months have been very important to the club as the season starts to wind down. During this time we had face a total of five matches and winning all five of them. The biggest match came against JS Baco. Despite what seemed to be a normal 3-1 victory it was more than that. As the match hit the 90th minute the club gained their second championship in a row. Below is the highlights from the match. 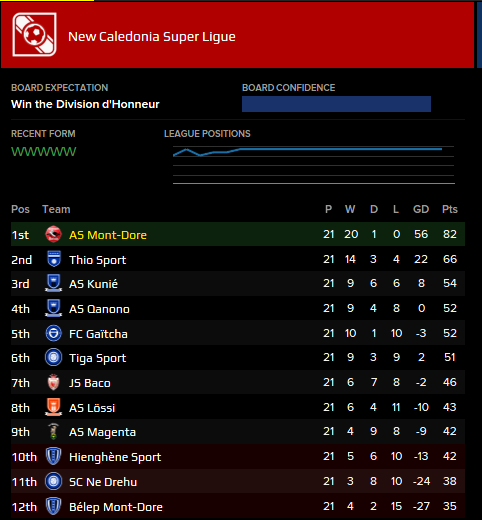 The other major event came as manager Kévin Gauthier announced his first ever youth intake. These players who are 16 years old will be with the U20 squad for the next few years. The most notable player on the list is goalkeeper Fabrice Bouchet. Here is the rest of the intakes.

November is finally here and that means we have won more match and the Coupe de France. The final match is set for 26 November against AS Magenta at their stadium. For the Coupe de France we were drawn against AS Trouville-Deauville on 12 November. The team will be having to travel to France for the match. This will be special for Kévin as this is his first time back to France since coming to AS Mont-Dore. "I am very excited to return home and face a French club I am looking forward to the challenge and seeing some friends and family at the match," said the manager on his reaction on the draw.

mgriffin2012
6 years
Looks like the league is all but secure mate! Fantastic work! Lets just hope the return to the mainland is successful!
Login to Quote

We have done it AS Mont-Dore has officially won their second league title under manager Kévin Gauthier. In a season that defied expectations his club has done the impossible by going all season long without a loss in the league. Outside of that once again the New Caledonia Cup was a disaster, hopefully next year they preform better. The club returns to the O-League next April.

Now onto the match of the month. For our club winning the league last season got us to participate in this seasons Coupe de France. Coming into it we knew the club would struggle due to the trip but they showed that they were able to look past that. In the match Kévin Gohiri was the only scorer. Here is the highlights form the match. 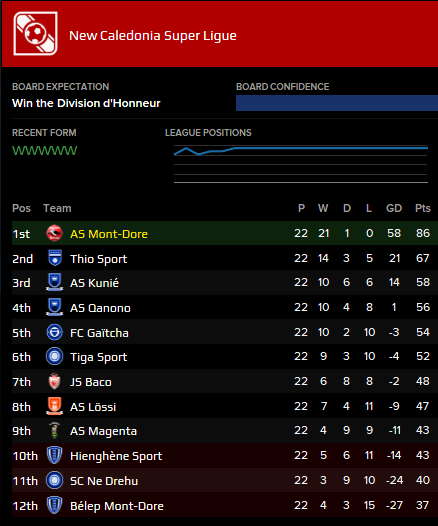 In a few days the club is off to Japan for the 2016 FIFA Club World Cup at the Nissan Stadium. The club has been drawn against Kashiwa Reysol. The match is set for a 7:30 kickoff time on 7 December.

C.J.Lippo
6 years
Congrats on another title win. Interested to see if you can replicate the giant killing feats of Auckland in the Club World Cup.
Login to Quote

Griffo
6 years
This league you are playing has plenty of interesting things occur, it certainly has me very interested in what is going on!
Login to Quote

MJK46
6 years
C.J.Lippo It was an interesting tournament

The 2016 edition of the FIFA Club World Cup has officially wrapped up with Real Madrid taking their second title. It was a very exciting tournament as a few clubs made their debuts. The three that did were AS Mont-Dore of the OFC, Kashiwa Reysol who is the host and Lekhwiya SC of the AFC.

The European giants had a very successful campaign on route to their second title in CWC history. On their way to the title they had beaten Al Ahly 4-0 and River Plate 2-1. Striker Karim Benzema lead the club and tournament with three goals

This tournament had a big surprise in AS Mont-Dore who had made it all the way to the Fifth Place Playoff. The New Caledonia side were the big overachievers of the tournament where they were not expected to advance past the playoffs. Sadly their run ended after a 7-1 beating from Mexican side Club América. Despite that Mont-Dore showed a lot of heart and passion and hopefully they return someday. Here are the results of AS Mont-Dore's first appearance in the tournament. Also here is a video of their only victory over Kashiwa Reysol.

Griffo
6 years
Awesome that you got to participate but the result against America was brutal...
Login to Quote

mgriffin2012
6 years
Ahhh that sucks, America were brutal man but it was always going to be a learning curve!
Login to Quote


2016 was the greatest year in club history with winning the league for the sixth time and winning the OFC Champions League. Oh and having a pretty decent run in the Club World Cup. While Kévin Gauthier and company are ready for a threepeat with the league and a shot at going back to back with the O-League.

At the end of 2016 the Fédération Française de Football announced that Kévin Gauthier was named French Manger of the year. He beat out Zidane of Real Madrid and Hubert Velud of TP Mazembe for this honour. Congratulations. French Manager of the year

A few days before Christmas the club got a very special early Christmas present and that has to deal with club structure. Due to the amazing year and performance in the Club World Cup, Chairman Albert Mapone announced that the club will become professional. "I had felt due to Kévin and the team proved themselves this season and the only way to keep this up is to go pro, said Mapone during the announcement. Here is the transcript of the official announcement, Club turns professional.

One of the biggest changes that you will notice in the next two years is an upgrade to the facilities. With turning professional the board has decided to put resources into the youth and training facilities. The goal is to become one of the top clubs in Oceania facilities wise and want to produce world class talent.

For manager Kévin Gauthier he has signed a contract extension worth €44,000 a year and it will run through the end of 2019. Gauthier had his own take on the announcement, I am very excited that we have progressed as a club in these last few years, with us becoming professional the staff and I will have to evaluate the squad and make changes. If we want to become the best than we need to get the best we can offer contracts to."

Also due to the club turning professional there has been a new kit supplier sponsor. French sportswear company PATRICK has signed a 5 year contract with us. Below are the kits the club will be wearing and are on sale for €25. The 2017 season begins with us hosting JS Baco on 31 March at home and the season concludes 25 November as we travel to face Thio Sport. Like last season we will be in the OFC Champions League Group Stage, Coupe de Nouvelle-Calédoni, and the Coup de France. 5 August: First Round of the Coupe de Nouvelle-Calédonie