For the busy month that was July I got to see the guys deal with so much. The first is that we experienced our first loss in the league this year. it was totally my fault as I made some dumb moves after our defenseman was called off on a straight red. That had helped Case de Portugal comeback and beat us.

Outside of that I have lead the club to promotion. It feels good to have wrapped everything up a month early as we know what holds for next year. i had told the guys that we need to take things match by match and not lose focus especially with a cup final on the way.

The semi final match against Lai Chi was nothing special really. We had won 2-0 against a pretty decent first division side. Hopefully during the final we can win it.

On the transfer side of things I did not make a single purchase for the second window in a row. I just felt our club was good as it was and that being a second division club I couldn't find any quality players to join. Honestly Macau has really bad players in the lower divisions. So I mostly moved guys due to having way too many on the roster. These were the players who moved on 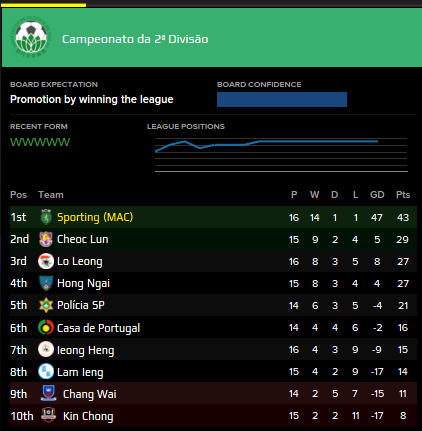 August is the final month of the season with two league matches that don't mean a thing and the cup final. I am hoping we have positive results in the three matches. The big thing is that I want them to finish the season strong so that the clubs of the first division know we are serious for next season. 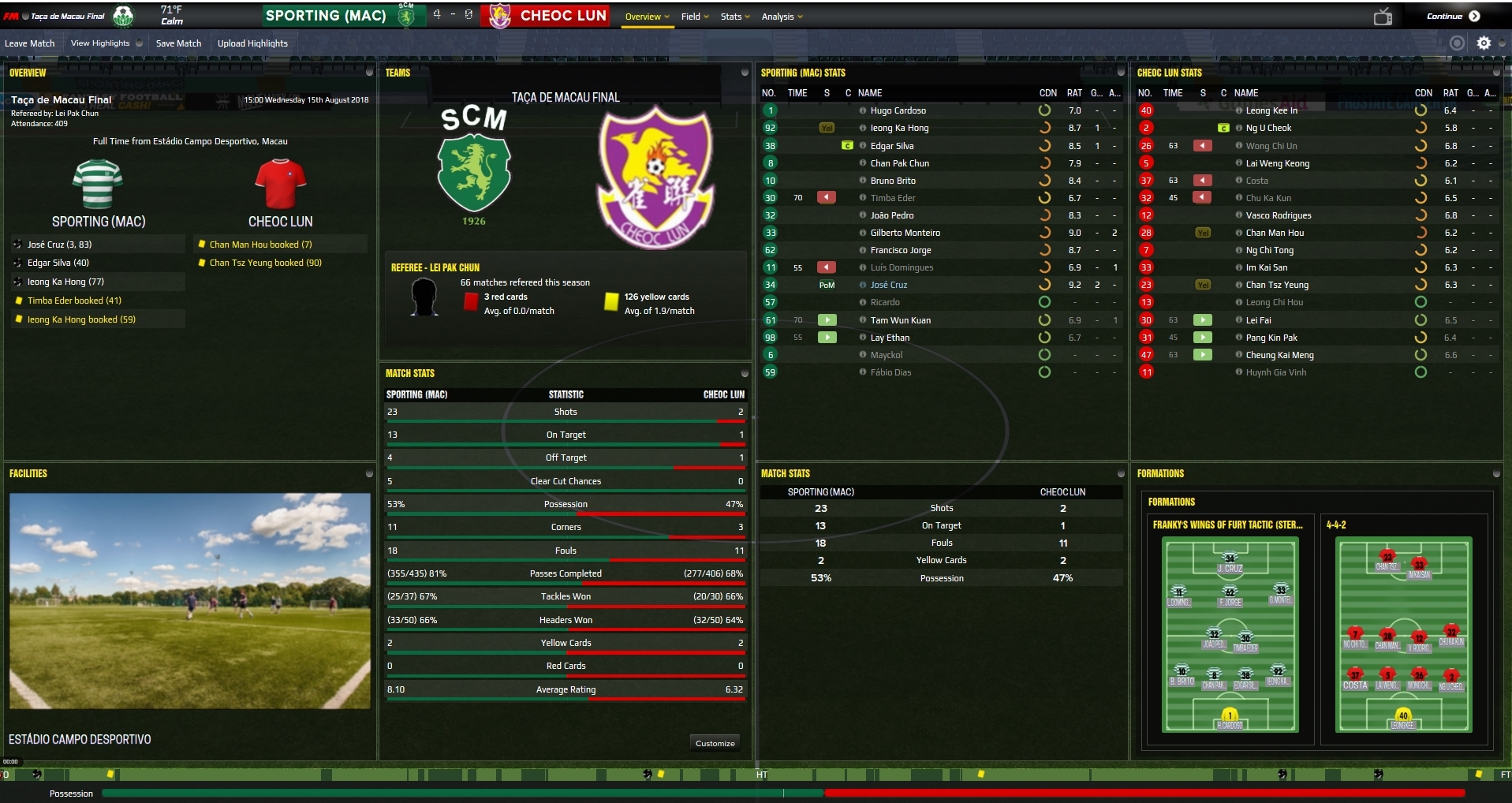 It was a battle between two second division sides in the 2018 Taça de Macau. For Sporting they would return in their second year in a row and Cheoc Lun made their first ever finals appearance. In front of a record 409 spectators Sporting showcased one of the best matches in finals history with a 4-0 win.

The match started out with a bang as Sporting's Jose Cruz capitalized on an error from the Cheoc defense with a =well timed finish in the 3'. in the 40' another error would cost Cheoc another goal. This time Captain Edgar Silva scored giving his club a 2-0 lead. Finally Sporting would score two more goals in the 77' and 83' giving them a final score of 4-0.

It was a memorable cup season as it was the first time two lower division clubs meet for the first time in the final. Here are the highlights from the match.

ScottT
5 years
Brilliant! You have had a great career so far with all these accomplishments!
Login to Quote

Justice
5 years
Congrats on winning the cup!
Login to Quote

MJK46
5 years
ScottT and Justice: Thanks for the kind words!!!
Login to Quote

All I do is win!!!!!! Seriously that should be the title of my book that I release someday. This season was amazing as I was able to overcome the odds with not speaking the two languages and getting thrown right into the role. What I find amazing is that ever since I started in 2015 I have won eight trophies in total. Next season will be amazing. Hopefully we can continue winning. The month of August was a perfect ending to the season especially in the cup. I mean there is not much to say other than the results speak for themselves. Well in my opinion Gilberto Monteiro was the man of the season. he lead the league with 16 goals.

Well we also had our youth intake day. I am not sure if these guys will be good or not we will see. 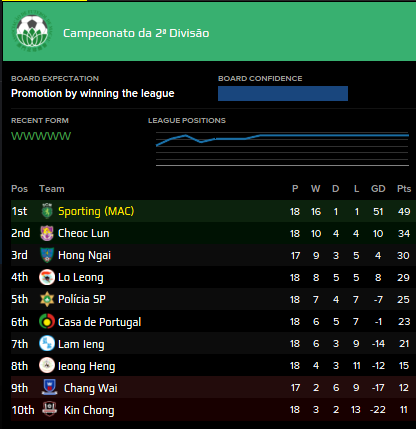 mgriffin2012
5 years
Well done on the cup win mate and fantastic job in getting promoted! Keep it up!
Login to Quote

So this has been an interesting off season to say the least. First I have applied to FK Sarajevo as they had an opening. Sadly I did not get the job even though they felt I was pretty qualified they wanted local. Rejection letter. Well I am not looking to move but if something comes along that I like I will go for it.

Probably the biggest thing that has happened so far is at the end of October. I was meeting with Chairman Keng and he told me that we are going professional. This makes me really happy as this is the second club I have ever managed to get professional status. I decided to sign a contract extension that gets me to 2021 and this time I am not complaining that this will suck. My goals are to win the AFC Cup and then try to win the AFC Champions League. It is going to take a lot of work so I will be looking to change this squad around big time.

Anyways other than that this has been an amazing year. At first I felt that this move was a mistake and not taking the WSW job but now that we are professional I am so pleased. The highlight of the past year has to be getting this club promoted and winning the Taça. Best part is my Portuguese and Mandarin has gotten so much better.

Anyways I look forward to 2019 and I hope we can go as far as we can. I am looking forward to what this new era brings my club. I am looking to exploit the rules and bring as many Portuguese and Brazilians to the squad.

Well that is all for now.

Griffo
5 years
Looking forward to following your performances in the top league!
Login to Quote

Jack
5 years
Would've loved you to get the Sarajevo job, but good news I. going pro!

Michael
5 years
Now the haar work oly begins. And I expect you to stay until the end of the contract

This has turned out to be a really really weird Christmas. I mean things have been going great as we are now professional and I am loading up on some amazing talent. Give this guy a shout. His name is Vinicius Lemes and came to us on a free transfer. I think he will be an amazing striker for us. I think this new look version of the club will be amazing.

I was at one of the local casinos and saw they had the early betting odds for the upcoming season. They have us as league favorites along with Benfica. Apparently Benfica turned professonal as well. The season will be very interesting.

So then I found out we won't be in the AFC Cup this upcoming season. I have no clue why though??? Last year we had two clubs in the competition from Macau and now it is back to one. I know in previous seasons it was only one, maybe there was a change in coefficient?? Oh well I guess that means we better win the league.

So one of the weirdest things has happened, I was named French Manager of the Year once again. It was not for managing Sporting but for AS Mont-Dore apparently they guys over in the FFF did not get the memo I have been away from there for a full year now. Even if it was for Sporting I don't deserve the award at all. Maybe it was an error or joke, just look and see the top three and the reasons. Manager of the Year.

Finally this is the most mind boggling and upsetting thing so far. Apparently Chairman Keng has decided to sell the club. This is one thing I do not understand at all. Maybe he thinks after making us professional he can get a huge profit off the club. I for one am pissed as I was in the middle of negotiations with a few players and now they have been cut off. Also I hear sometimes new owners like to change the staff around and my job might be in jeopardy. This feels like we the club have been used and that hes dumping us for no reason.
Login to Quote 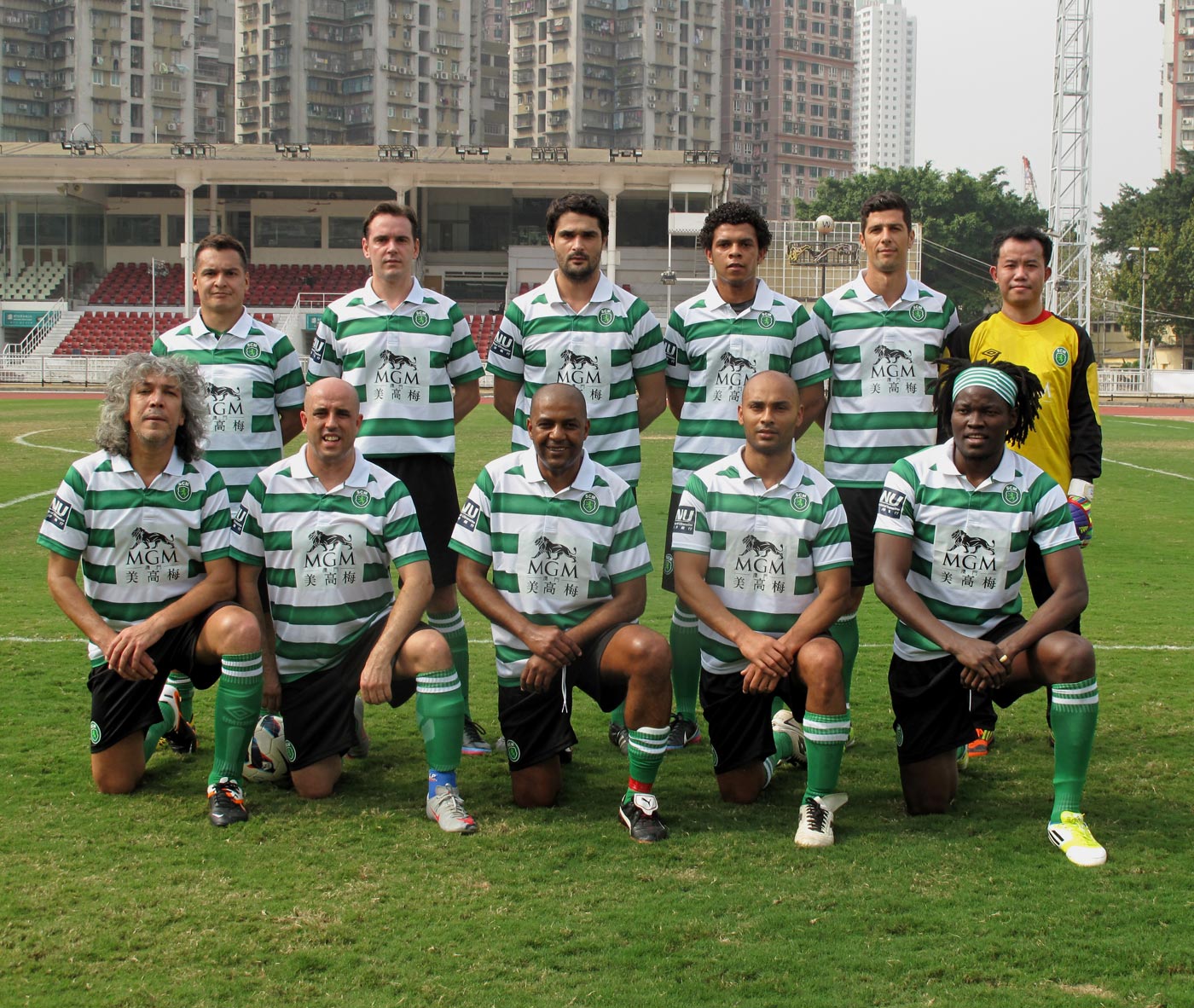 Sporting Clube de Macau are in the unique position of becoming one of the first clubs in the country to turn professional (Benfica is the other). They are on an island, clearly one the most improved clubs in Macau. Two years ago they were relegated into the second division and have finally returned to the top.

For Kévin Gauthier and company, it's treble or bust. They should be able to obtain a Liga de Elite win and a trip to the Taça de Macau final for the third year in a row by rotating their squad heavily and giving run-outs to youngsters. Their primary focus is the league, and it will remain so until they finally return to the AFC Cup and hopefully a trip to the AFC Champions League in the future.

Even though Sporting had no problem winning a couple of domestic trophies last season, they still needed better competition as they were previously in the second division. They finished the season on a high note by defeating Cheoc Lun in theTaça de Macau final, but that was merely just a third time they played each other this season and it felt like a league match.

One of the bright sports for Sporting has came from their newly minted professional status. Chairman Chairman Tam Si Keng announced the end of the season the club would be turning professional for the 2019 season. It will be interesting to see how the league will react to this.

One of the biggest changes to the club is that they have had a total face lift on the squad. Manager Kévin Gauthier has taken advantage of the Portuguese and Brazilians not counting as foreign players rules. Since the transfer window opened in November he has added a total of 14 new players and released 25. The majority of the newcomers join from Brazil including Vinicius Lemes , Foguniho and Chininha. Goalkeepers Aldo Dali and Ricardinho will be both battling for the starting goalkeeping job. At the end of last season Hugo Cardoso was signed by Portuguese side Operario Acores. 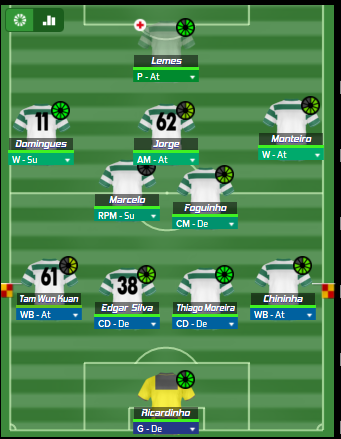 The biggest question that needs to be considered is how far can this club go this season and can they get a treble? As of right now the club has so many youth players on the first team that the average age is just 21. Will Sporting be able to be successful with youth and a whole new team and will they be able to beat last years league champions Lai Chi and runners up Benfica? Another thing to question is that the club is currently in a takeover bid. Could a change of management at the top hurt this club??


Predictions:
Even though Sporting are dealing with a ton of injury issues in the preseason they still have far and away the best squad in the league. It would be absolutely stunning if they failed to win the league in the season in which they became professional. We predict that they win the league and at worst finish second.