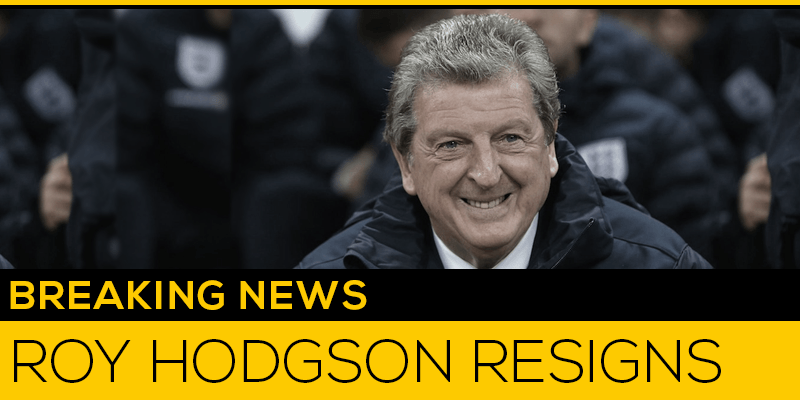 Following reports that the England manager was set to resign as boss, today the Football Association has confirmed that he has left the role.

The 68 year old also said in a statement that he had decided to retire from football altogether, bringing a successful thirty-eight managerial career.

In a statement on the Football Association’s website, Hodgson said that he’d ‘really enjoyed his time with England’ and was ‘very proud’ to round off his career with his nation.

Roy Hodgson:I would like to publicly announce my resignation as manager of the England national football team, and my retirement from football. I am very proud of my career, what I have achieved and I have especially enjoyed my time in charge of England. I feel my age has caught up with me, and I feel someone younger and a bit more dynamic should take the job and lead England to France successfully.
I am proud to say I worked as England boss for two very good years, and I am very much pleased with what I have achieved. I want to say thank you to all the support that the FA and the supporters have given me in my time as manager, and I will certainly be watching Euro 2016


Hodgson, who hails from Croydon in Surrey, spent his playing career at non-league level, appearing for sides such as Tonbridge Angels, Gravesend & Northfleet and Ashford Town after not making the cut at Crystal Palace’s youth academy.

The Englishman made his name as a manager, and was appointed as Halmstads BK manager in 1976. He stayed in Sweden for four years, winning two league titles, and taking Swedish football by a storm, a country where he would go back to manage in on numerous occasions, managing sides such as Oddevold, Örebro and giants Malmö FF; where he enjoyed success, winning five league titles in a row.

After leaving Malmö, he moved to Switzerland, and was announced manager of Neuchâtel Xamax in July 1990. He led the team to a second place finish in the championship-playoff, and therefore getting a tie against Real Madrid, which they won 1-0 in the first leg, before losing 4-0 in the second.

He then became Switzerland manager, leading them to an all-time high of 3rd on the FIFA rankings, and then joined Inter Milan in 1995, where he stayed for two years, leading them to the UEFA Cup final, which they lost to Schalke – and this caused Hodgson to return back to England for the first time since departing Bristol City in 1982 to manage Blackburn Rovers.

He stayed at the Lancashire side for a year, after being considered for the England job after Glenn Hoddle was sacked, and then moved back Inter Milan in a caretakers roles, and then to Switzerland with Grasshoppers.

However, in July 2000, Kevin Keegan resigned as England manager, and once again Hodgson was shortlisted, but had already agreed a deal with Danish side FC Copenhagen, where he proved an instant success, taking a team that had finished seventh and eighth in the two previous seasons to the Superliga championship in the 2000–01 season – the club's first championship since 1993.

He then joined Udinese in Italy, but was sacked after a few months in December 2001, and didn’t get another job till April 2002 – where he became UAE boss, but was sacked in July 2004, where he then took over Viking in Norway, where he stayed until December 2005 and took charge of the Finland national team. 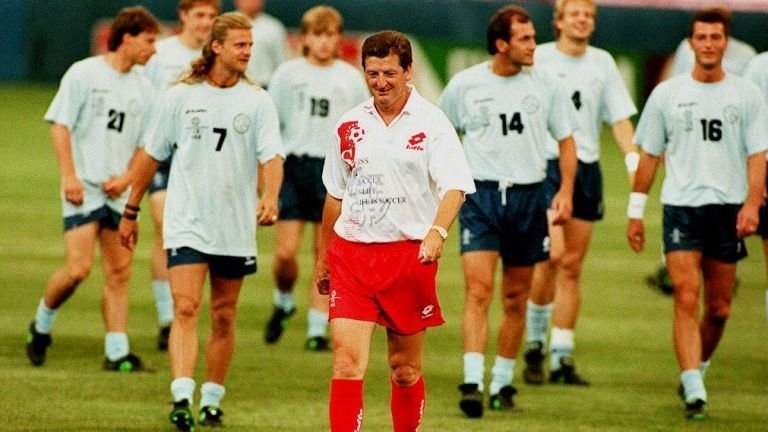 Hodgson with Switzerland during Euro 1996

He left Finland in 2007 and joined Fulham, possibly his most successful spell as a manager; taking them to their first European final in their 130 year history, but lost to Atletico Madrid. He also led the London side to 12th in the Premier League.

After his successful run in Europe, he replaced Rafa Benitez at Liverpool in 2010, but his time at Anfield was less successful, leaving the club in 2011. He then joined West Brom, where he led them to 10th in the table.

He then joined England after Fabio Capello resigned in May 2012, where he stayed for the next two years, leading his country to Euro 2012 and the World Cup 2014 in Brazil. Despite impressive qualifying campaigns, he could not stop poor tournament performances, crashing out to Italy in the quarter finals and the group stage respectively.

His resignation from England caused a shock, with many expecting him to leave after Euro 2016 in France, and now England will have to act quickly to find a replacement.


Well, I am back. Kind of. I really missed writing stories, so I thought how can I return? An international save. However, I have probably the most important couple of months of my life ahead of me, with exams that will have an impact on my future. So, I will not be able to update this regularly, but when I have some free time, I certainly will. I hope you enjoy this as much as I will!
Login to Quote

AlexTHFC
4 years
ermagerd this is like my style of update

Good luck, it's great to see you back!

You are reading "Making the Three Lions Roar Again".