Starting the 2nd half of the season off with a pretty easy game at home against Al-Wehda. In all honesty it was never a game. We dominated from start to finish, but only managed to score one goal, in the last 15 minutes of the game. Great team efoort, not that great of a scoreline.

Another match which we should win with comfort is away against Al-Qadisiyah. We went down to 10 men after 30 minutes, but still manage to control the match. Getting a goal before half-time and one shortly after halftime did the job. Al-Qadisiyah never came back and finished with 10 men as well.

A very tough game against Al-Hilal was next. A very even match was expected and it was a very nice game to watch as neutral spectator. Both teams had a lot of chances, but some great goalkeeping on both sides kept it even. After 32 minutes it was the first goal, for us. But Al-Hilal replied quickly and made it 3 minutes later. The 2nd half was exactly the same, but 2 fast goals just before the 60th minute sealed the deal for us. Al-Hilal got one goal back but it was not enough.

Another very hard match, this time away against Al-Nassr. It was a game which promised a lot, but it didn't quite live up to these expectations. Two very poor teams against each other with Al-Nassr as deserving winner. Never great to lose, but we also finished with 10 men.

The first game of the Champions League was away against Malavan. The payers from both sides looked nervous and didn't play well. We got lucky when we managed to score just before halftime. The second half had chances on both sides, but no one took them until the 89th minute when it looked like the players thought, that they had already won.

3 days later we played at home against rivals Al-Ahli. The score speaks for itself, 0-6. Having to play a backline made up of midfielders, because of injuries isn't great and then to see your only defender getting send off was worrysome. Al-Ahli played out of their minds and we, well we were basically shit.

Our second Champions League match was against Al-Jaish, this time at home. We kept the trend of the month going, just playing a very poor game. Luckily for us Al-Jaish weren't great either. But they were better resulting in a 0-1 win over us.

After the very hard scheudle of 4 hard games inside 14 days we wanted to get some form back against Al-Ettifaq. The game was over after 30 minutes in which we scored all 3 goals. Downside to this match was another red card.

Just 4 days later we had our first match in the Cahmpions Cup, which I wanted to defend as the winner form last year. We scored early on, but Al-Mojzel could have made easily an equalizer. Luckily for us they didn't and we moved on to the next round

After the 2 victories we faced struggling Al-Taawoun. We went 1-0 quite early on, once again, but didn't manage to make the 2nd goal until late in the second half. Al-Taawoun were looking very poor and didn't really stand a chance. Just before the final whistle we made the 3rd goal.

The 3rd match of the Champions league was away against Al-Ain. Al-Ain suprised me, only getting one point in the first 2 games, just like us.The game was quite spectacular and managed to keep it's drama right until the end when we scored 2 times inside 3 minutes in the last 10 minutes. It felt good winning a game in the Champions League, but we could've done it faster. 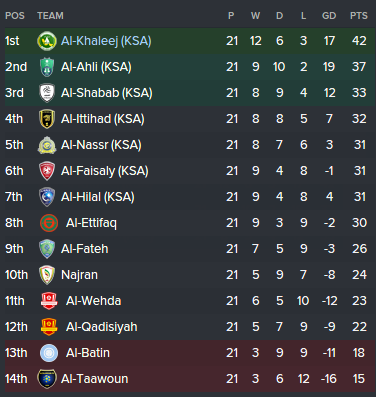 As you can see we remain first in thePro LEague with 5 points difference between us and number 2.
Despite the poor start in the Champions League we are 2nd, which was my aim. Hopefully we can keep both those positions in the next few months.

Choosing this PoTM(s) was hard. We didn't look that great these month. Al-Faraj was the best of the worst getting almost every game a goa and/ or an assist and getting MoTM on multiple occasions

Managers Opinion:
"We started off the 2017 great with three wins. After this we didn't win once in four games, but we managed to pull it together with some great results toward the end of these three months. We are stil first and looking very good to at least get a spot for the Champions League next year. Halfway through the Champions Leeague-campaign i'm proud, we managed to keep ourselves together away from home, which was a worry for me."
Login to Quote

mgriffin2012
4 years
A poor run in the middle of that period but it hasn't cost you too much!
Login to Quote

You are reading "Aleksandar Zimmerman: World-beater".