Welcome to my new first ever story about reviving the former English power Newcastle. After being relegated the club are in disarray with a Champions League winning manager at the helm who doesn't know if he is going to return. Players demanding to be transferred due to the fact that they think they should be playing in the top flight. On top of all this now they have the daunting task of getting out of the dreaded Sky Bet Championship.
Login to Quote

News has came out of Newcastle this morning that manager Rafa Benitez has stepped down as manager of Newcastle United. The spaniard has been manager at Newcastle for just over two months, due to his pedigree as a manager no one can criztie him for leaving a club that will be playing second division football come next season. Benitez is the only manager ever to win the UEFA Cup, UEFA Super Cup, UEFA Champions League and the FIFA World Cup. Unfortunately the experiences and success in these competitions have not translated to keeping the Toon out of the relegation zone.

Rafa said to reported earlier today that "Even though my time at this club was very short and we didn't get the end result we were all hoping for, I enjoyed my time at the club, the people, the players and especially the fans. I cannot thank you guys enough for your continuous support through this tough campaign and I believe that you guys can become a great club in the future just not with me at the head of it. I wish you guys the best of luck in the future and good luck!"

Now with a vacancy at the manager position where will Newcastle turn? There are a lot of potential candidates out there but one man has been made the favourite by the bookies and that man is legendary Newcastle striker Alan Shearer. Shearer who is Newcastle all-time leading scorer, fan favourite and ideally sounds like a move that would make sense for the club to revive the damaged fan base and bring excitement back into St. James' Park.
Login to Quote

mgriffin2012
5 years
Should be good mate, welcome to the forum mate!
Login to Quote

Justice
5 years
Good luck, will be an exciting challenge for sure!
Login to Quote

http://i.telegraph.co.uk/multimedia/archive/01376/Alan_Shearer_1376237i.jpg
Newcastle have acted quickly in hiring their new manager and it is none else than arguable the best player ever to lace them up the Magpies, Alan Shearer. This may upset some Newcastle fans due to his previous stint of manager at the club where he only manager in 8 games coming in to finish off their 2009 campaign, in those 8 games he had 1 win, 2 draws and 5 losses. But with his hometown club in dire circumstances and more time on his hands for turn this into his team there is a lot of hope surrounding the Magpies with this new appointment.

In an interview earlier today he answered some questions for the press:

"What will be your first priority now that you are now manager of Newcastle United?"

My first priority here will be to sit down with every player and see who wants to stay here for long run and who wants to move on from the club.

"How quickly do you think you can take this club back into the Premier League?"

"Will you be giving any youth a chance in the first team this year? If so have you thought about who these players might be?"

"Yes, it is very much in my plans to give the youth a chance in the first team this upcoming to season as we are looking to build for the future. Some of the players to look out for are, Jamaal Lescelles, Rolando Aarons as well as Callum Roberts. One more question.


"Have you identified any transfer targets moving forward?

"As of right now I have not. A lot of the players that we will bring in will depend on who decides to leave the club so until we know who is leaving I do not know who I want to bring in at this point in time. Thanks you everyone for coming out today and I look forward to taking this club to great heights one again. Cheers."

Hopefully new boss Alan Shearer and bring some special moments back to Newcastle as a manager this time instead of a player, here are some his best moments as a Magpie. 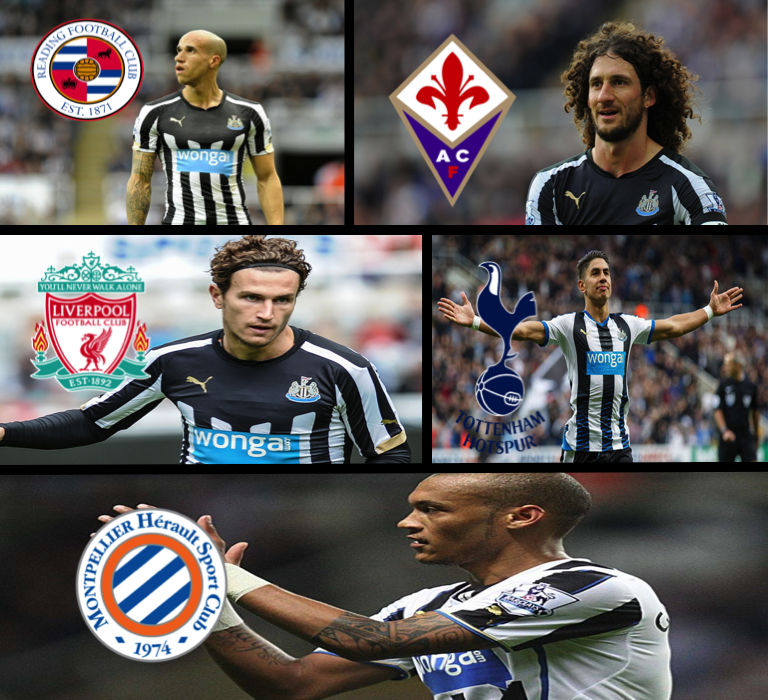 Five first team players have been sold by the club following their relegation into the Sky Bet Championship. The five players that have departed the club are Ayoze Perez, Daryl Janmaat, Yoan Gouffran, Gabriel Obertan and former captain Fabricio Coloccini. The two players who's departure will impact the club the most at star wondered Striker Ayoze Perez and solid right back Daryl Janmaat. Both were a big part of the team in the last campaign and will leave considerable holes in the squad moving forward and players will now be forced to step up.

Ayoze Perez is a 22 year old Spanish striker who came to Newcastle two years ago from Tenerife for a fee of £1.5 million. During his time at Newcastle Ayoze netted 13 times and assisted twice in 70 league appearances for Newcastle. Other key departure right-back Daryl Janmaat came to Newcastle two years ago well coming over for a fee of £5.75 million from Dutch side Feyenoord, Janmaat made 63 league appearances for the Toon scores 3 times and assisting 10 others. Due to relegation though both have asked the club to move them on so Ayoze has been sold to Tottenham for a fee of £10 million and Daryl Janmaat has sealed his move to Liverpool for a fee of £11.25 million.

Other transfers include Yoan Gouffran moving to French side Montpellier for £1.25 million, Yoan made 89 total appearances for club. Gabriel Obertan has moved on to Reading for a fee of £1.1 million, he made 77 appearances for Newcastle during his time at the club. Also fan favorite and former captain 33 year old Argentina centre back Fabricio Coloccini. He came to club for a fee of £9.5 million from Spanish side Deportivo in 2008 and has poured his heart into Newcastle United. Coloccini made a massive 275 appearances for the Magpies and will forever be in all of the hearts of fans.

It also should be mentioned that three players have been sent out on loan. Rey Cabella and Florian Thauvin have both been sent on loan to Ligue One club Marseille and Massadio to French club Lorient.

Club manager Shearer has said that these players should be the only one's to leave the club as of right now but he also said that anything can change and that they are listening to offers for almost all of their current players.
Login to Quote

Griffo
5 years
I couldn't even imagine what would happen if Shearer got hired again... everyone would want to protest but probably wouldn't... it would be a crazy situation. IRL he would never return... he hates the current structure of the club!
Login to Quote

mgriffin2012
5 years
Good move selling the players you have done if you ask me mate, good start to this story!
1
Login to Quote 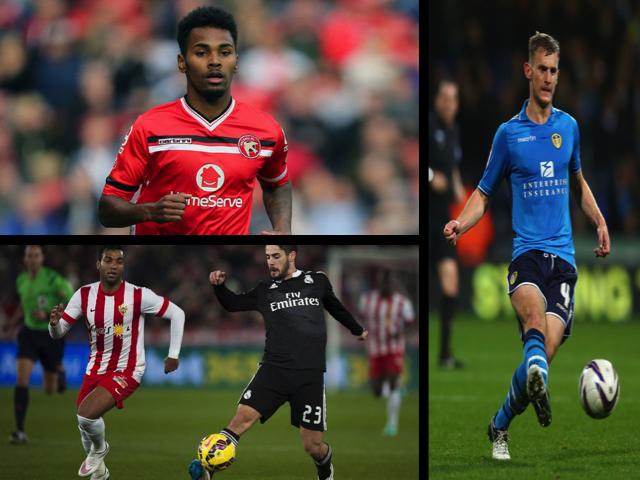 Alan Shearer has acted quickly in fixing the squads main weak point at the end of last year. They have brought in the three defenders for a total fee of £8.2 million. They have brought in a left-back, centre-back and a right back. The left back is an Englishman from Sky Bet League 1 side Walsall, Rico Henry for a fee of £2.5 million. The centre back they have purchased Tom Lees from Sheffield Wednesday for fee of £3.4 million. They also replaced Jaryl Janmaat with Brazilian right-back Michel from Spanish side Almeria for a fee of £2.3 million.

Rico Henry is a 18 year old full-back who has arrived for a fee of two and a half million pounds from Walsall. Henry impressed in the short first team football he had when he was there, he only made nine league appearances for the club but is definitely one to lookout for in the future. He may make a good amount of appearances this season though due to the fact that the Magpies defence was so bad last season and was ultimately the reason why they went dow.

Their second signing is centre back 25 year old Tom Lees from Sheffield Wednesday. A proven rock in the heart of Wednesday and Leeds defence for the last four years in the Championship division, making at this 40 league appearances in each of the seasons. It must also be added that Newcastle may have a plan to quickly sell him if they do get promoted because of the fact that they bought him for £3.4 million but there is a transfer clause where Newcastle will owe Sheffield Wednesday another £3.6 million if he makes 50 league appearances for club so I’m sure Newcastle will have that to think about come next season.

Their last signing of this transfer window is former under-21 international Brazilian right back Michel from Almeria. Michel had been with Almeria since 2008 when the club bought him for Brazilian side Flamengo. Michel made 131 appearances for Almeria impressing everyone with his pace down the flanks and great crosses.

It looks like Alan Shearer has filled the holes in this Newcastle teams as they now prepare for their quest back to the Premier League.
Login to Quote

Hoosier
5 years
Rico Henry has been one of my faves in FM16. Great signing!
Login to Quote

Pittyy96
5 years
Thanks, I have high hopes for him and hoping he can be my starting left back for a long time.
Login to Quote

mgriffin2012
5 years
Some good signings in there mate, squads shaping up nicely!
Login to Quote

Griffo
5 years
Certainly making some moves, best of luck with the players you have brought in!
Login to Quote

You are reading "Reviving the Toon - A Newcastle Story".