I know, I know; 'Jesus, i've seen more InfraRed Stories this year than I have goals by England'

But this one is different: In the lull between the end of the domestic season, and the launch of FM17, we all need something to keep us amused. For me, I will be taking charge of the dutch International side, attempting to take them to the heights never reached by the side in reality.

My first goal will be to take the Dutch to Euro 2016, by bleeding a new generation of talented youngsters, and I will look to present our results and monthly roundups through a mixture of graphics and writing. The first update will pick up the Dutch squad announcement ahead of a European qualifier against Turkey: I will be entering the persona of current Dutch boss Danny Blind, as I embark on this adventure

ScottT
4 years
One goal... is this a tease at me losing 1-0 to Holland at the Euros with Finland?

Good luck, this looks like it could be great!
Login to Quote

ninjaskill
4 years
Well other than the England joke a good start. Hope you win all your games except vs Iceland

In a month where the Oranje had no International matches, manager Danny Blind had some tough decisions to make in the background, particularly around who was going to make his first squad for the matches against Turkey and the Czech Republic in September.

Transfers
Two players who's summer Activity had drawn attention were former FC Twente duo Hakim Ziyech and Felipe Gutierrez, who moved to Arsenal and Sunderland respectively: Gutierrez providing a glorious assist on his Sunderland debut after a £5m move, while Ziyech was convincing if not spectacular for Arsenal in his first match, having moved for £5.75m.

Speaking to the media, Blind called these deals "A good sign for Dutch football" going on to explain that "If we are producing talents domestically that teams such as Arsenal are looking to buy, and bring into their first teams, then this can only benefit our national side. I would like to see more Dutch clubs bringing their homegrown talent to the forefront as well, but exporting talent is no bad thing."

Daryl Janmaat is another Oranje player making waves abroad, following his £7m switch from Newcastle United to West Ham in England, the Right Back has had an impressive pre-season, and helped his club keep a clean sheet in their opening game against Middlesbrough.

Injuries
It was also reported during the month that Davy Klaassen had picked up a knee injury which could keep him out for almost 2 weeks, making him a doubt for the Turkey and Czech Republic matches.

PSV winger Luciano Narsingh was also ruled out for 4 weeks after picking up a hernia in training. The 24 year old will be sorely missed by both club and country, having already racked up 3 assists in his first 3 games of the season.

Squad Speculation
As the announcement of the Dutch Squad draws closer - expected in the next week or so - there are a few players who are really pushing for inclusion. Blind is likely to take the two 'easier' games as a chance to rest some of the older stars, and perhaps start to bleed some of the new stars of the future. Certainly, the exclusions of Anwar El Ghazi and Riechedly Bazoer from the youth squads tends to suggest their inclusion in the main squad may be imminent.
Login to Quote

September gave us the chance to get our teeth into European Qualifiers, and the chance to secure qualification for the tournament in France, taking the pressure off of the final double-header against Kazakhstan and Iceland in October. 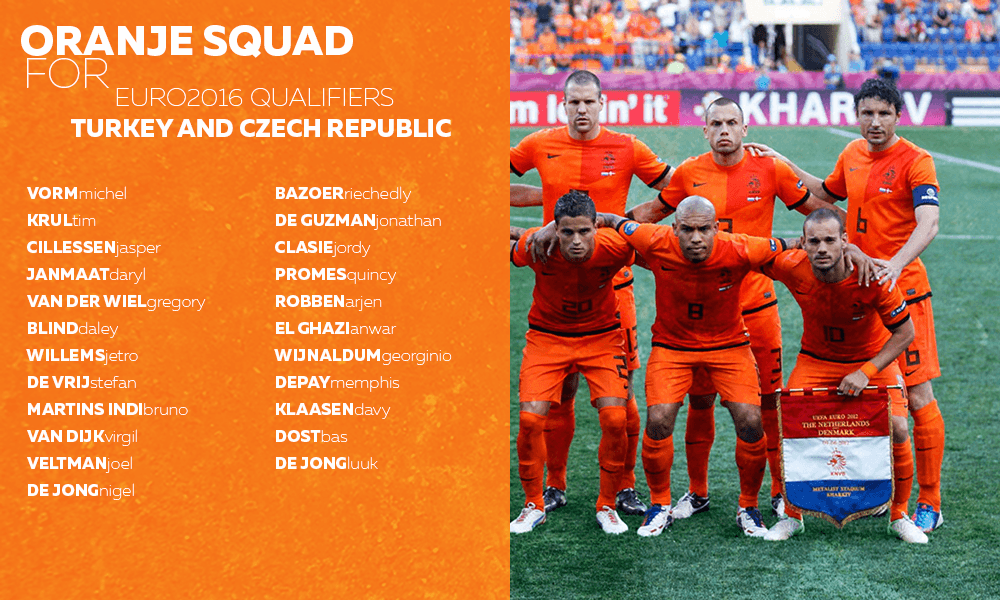 Overall, the double-header could absolutely have gone worse: a resounding win against Turkey was spearheaded by Memphis Depay, who tore holes into the defence playing as a striker, his prolific game capped by a hat-trick as Turkey struggled to contain his pace and trickery. The result put us into a great position to secure qualification against the Czech Republic.

However, it wasn't to be, as the Czechs countered superbly, goals from Kalas and Kadlec cancelling out Arjen Robben's early opener. I was pleased with the way we played, but it was tough not to get the result we needed.

Failure to win means that our next double-header is absolutely critical to secure qualification: it's a double header from which I'm reluctant to accept anything less than 6 points.

This month's star man award has to go to Memphis Depay, purely for his incredible performance against Turkey: trusted to lead the line, the Manchester United man showed exactly why the English side paid almost £20m to prise him away from PSV.
Login to Quote

mgriffin2012
4 years
Good luck man! Netherlands is a really good side that needs some investment in it!
Login to Quote

Griffo
4 years
Great graphics Infra, I would really love to see you stick with a story man we all know what you could be capable of!
Login to Quote

Jack
4 years
Great graphics and delighted to see you back on the story section! Tough loss to Czech Republic though

October saw us play out the final 2 European qualifiers, against Kazakhstan and Iceland. I took the chance to play around with the squad a bit, ruffling some feathers in the process: dropping big names such as Jetro Willems (who was later called up to replace the injured Quincy Promes) caused a bit of an outcry, but most players understood the decision to try to bleed some youngsters. 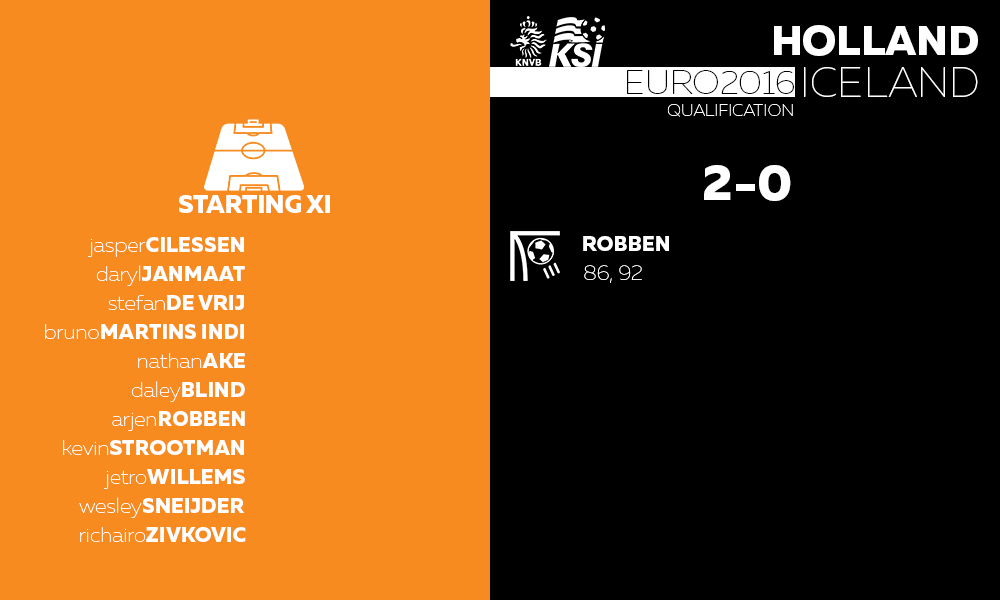 Two solid wins saw us top the group, guaranteeing qualification after the Kazakh game was important, as it took the pressure off the Iceland match, although we were perhaps too relaxed, with only 2 late goals from Arjen Robben sparing our blushes in the final match.

Conscious of the time between these games and the Euros, I have arranged two friendlies for next month: against France and Wales, which should test our mettle against big opponents, the likes of which we will face at the Championships in France.

Star Man award this month goes to Chelsea Left back Nathan Ake, who made some serious impressions in his first 2 games this campaign, running both games from the left wing, and averaging an assist per match. I'm hoping he can push for first-team football at Chelsea this year, and merit his inclusion in the squad regularly moving forwards.
Login to Quote

AlexTHFC
4 years
Wow I didn't realise you could graphic <3

An excellent start and a nice qualification campaign. Now to win the Euros

You are reading "Oranje: One Nation, One Goal".