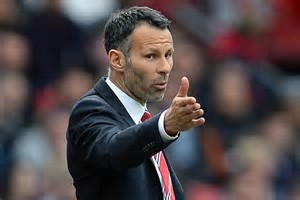 The 43 year old Welshman Ryan Giggs' Tenure at Wolves comes after the sudden dismissal of Kenny Jackett By The Fosun group after a couple of weeks of deliveration, with inside reports saying that they did not believe Jackett to have the right tactical nouse and pulling power for the potential signings Wolves will be looking at making.

Giggs himself hasn't been short of controversy after considering himself favourite to take over Louis Van Gaal at Manchester United to finding himself losing out to Jose Mourinho and finding himself jobless. Giggs infamous for being a Manchester United legend will step into his first Full Time managers job at Molineux. Sir Alex Ferguson was requested for an interview about Giggs Appointment and was quoted as saying " Ryan was born a natural leader gifted at his feet and one of the most intelligent players i ever had the pleasure of coaching, Wolves will be a perfect place for him to cut his teeth as many of you know my son was a player for them in years gone by and i have a good relationship with the club. I am excited for both Ryan and Wolves beware of the Sleeping Giants"


Wolverhampton Wanderers(commonly referred to as Wolves) is a professional association football club based in the city of Wolverhampton, West Midlands. The club was originally known as St. Luke's FC and was founded in 1877 and since 1889 has played at Molineux. They compete in the Championship, the second highest tier of English football, having been promoted from League One in 2014 after a solitary season at that level.

The club is owned by the Chinese conglomerate group Fosun Group,Fosun bought Wolves from Steve Morgan, who had taken ownership in August 2007 for a nominal sum of £10 with the proviso that £30 million was injected into the club, ending an almost four-year search for a new buyer. Morgan oversaw nine full seasons before placing the club on the market in September 2015.He had bought the club from Sir Jack Hayward, a lifelong fan of the club, who had purchased it in 1990 for £2.1 million. During his tenure he invested an estimated £50 million of his personal wealth to rebuild their stadium and fund new players, though the team only achieved one season in the top flight during his 17 years at the helm despite their increased spending power.

Michael
5 years
Good to see you back.


Ryan Giggs in his first 2 days as Wolverhampton Wanderers manager has already bolstered his already large squad with 2 centre midfielders. Joining the Ranks of Conor Coady, David Edwards, Romain Saiss, Jack Price, Lee Evans, George Saville in the chase for a center midfield starting birth is Jack Rodwell and Haris Belkelba from Sunderland AFC and Tours Fc respectively, Although rumours are surfacing that Saville, Evans and Coady may be on their way out of the club shortly. 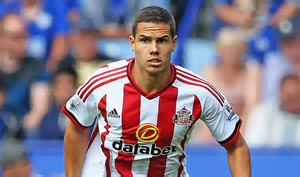 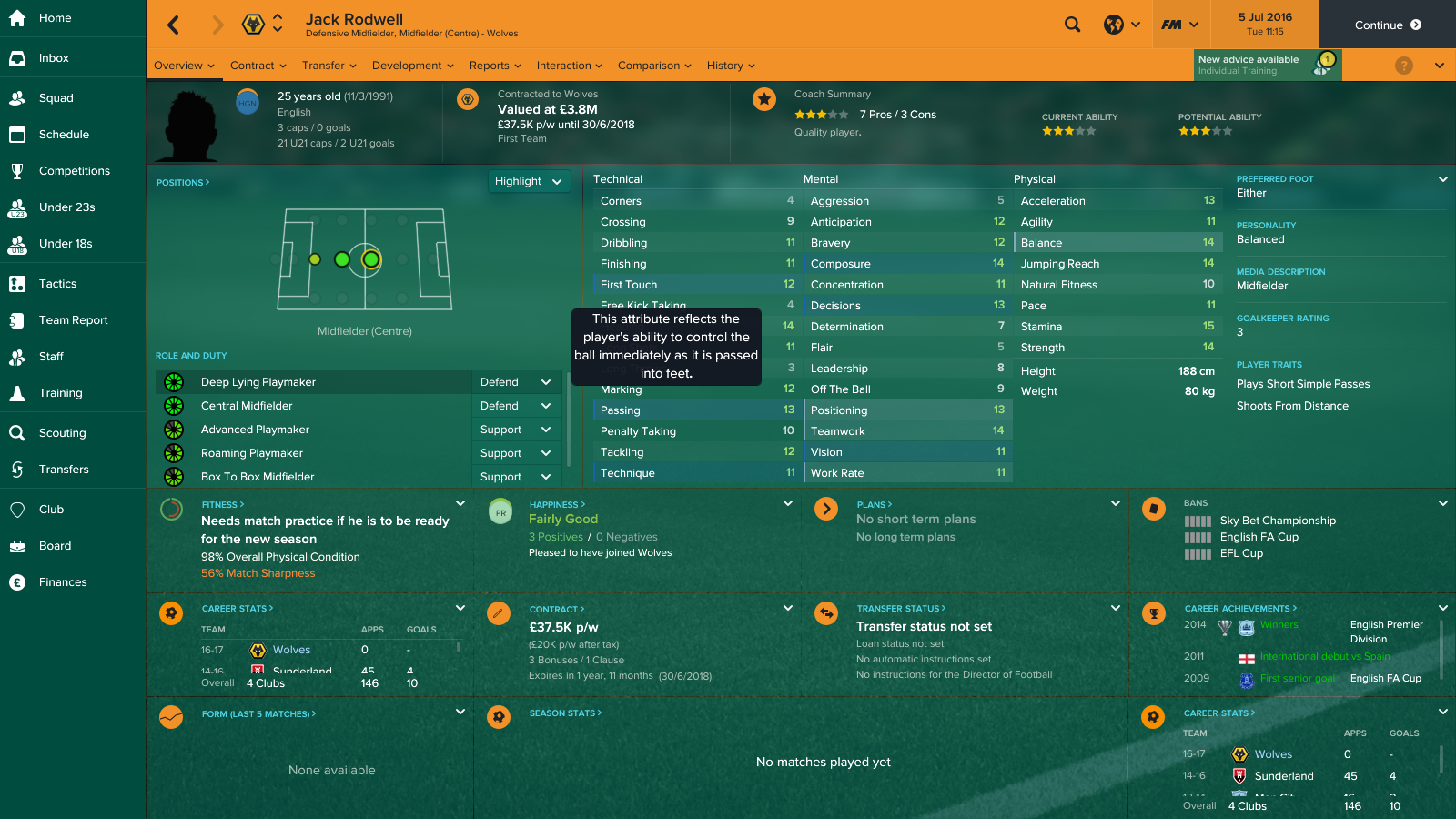 Rodwell signs for £2.9 million, Looking to resurrect his career in the championship the young English midfielder was once tipped to replace the likes of Steven Gerrard and Frank Lampard in the Countries midfield and starting Line Up has a declining career since a big money to move to Manchester City from Everton Fc a few years ago. 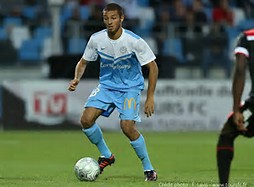 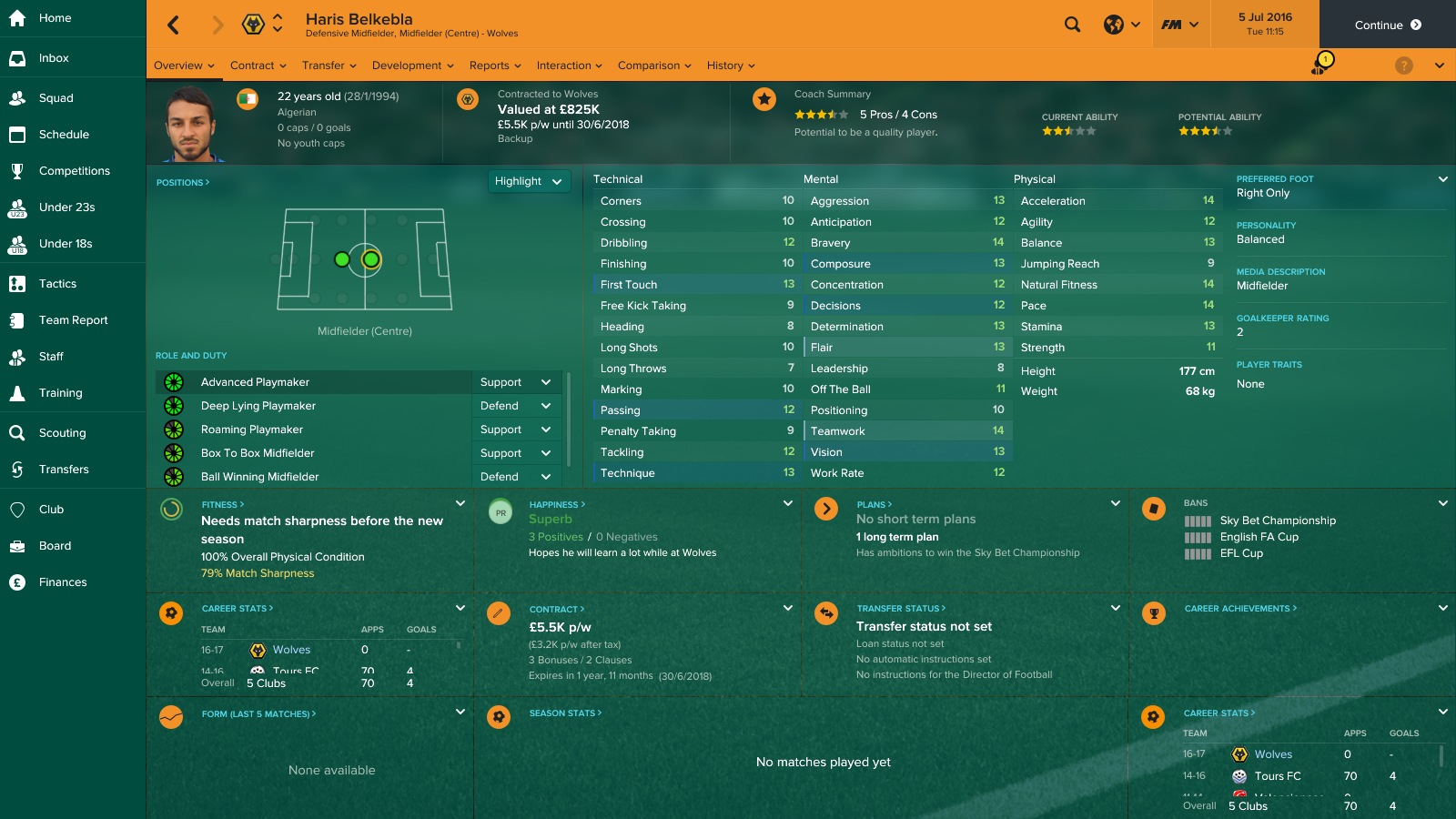 Joining Rodwell is what may come as a surprise to many Algerian youngster Haris Belkelba in a deal that could eventually rise to £1.2million. Not much is known about the player but many source inside the game do not understand why Giggs has plumped at wasting £1.2million who will be right only time will tell .

ScottT
5 years
I'm surprised Rodwell made the step down, although I do think that's his rightful level. Will be interesting to see how he does. As for the Tours guy, I haven't heard of him before so let's see how he goes.
1
Login to Quote

mgriffin2012
5 years
This looks like it could be pretty cool! Jack Rodwell could be a huge player for you!
Login to Quote

TRANSFER FLURRY AT THE MOLINEUX 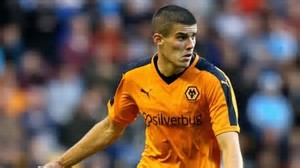 
There appears to be a revolving door at Molineux at this week with a flurry of transfers happening Ryan Giggs who has only been with Wolves less than a month has just overseen the sale of Connor Coady an ex Liverpool FC graduate for £5.5 Million, in return Giggs has raid the Tigers for promising left Back Josh Tymon on loan with a future fee of £3.8million agreed. 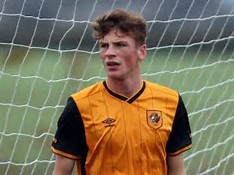 The Welsh wizard has also sign Dwight Tiendelli for free the former Swansa player had found himself without a club and will be looking at competing with England's Under 21 international Dominic Iorfa for a starting berth. 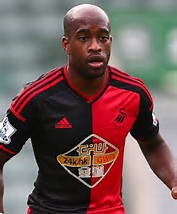 But the biggest new of the day is That gigs may have had a great influence on Zizou (Zinedine Zidane) in his play career maybe even during the infamous game against the old lady where Giggs scored one the most memorable goals in Champions League history en route to winning the competition in 99. Zidane has allowed his son Enzo to Join Giggs at Molineux for a measly £600k 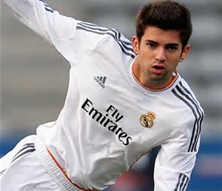 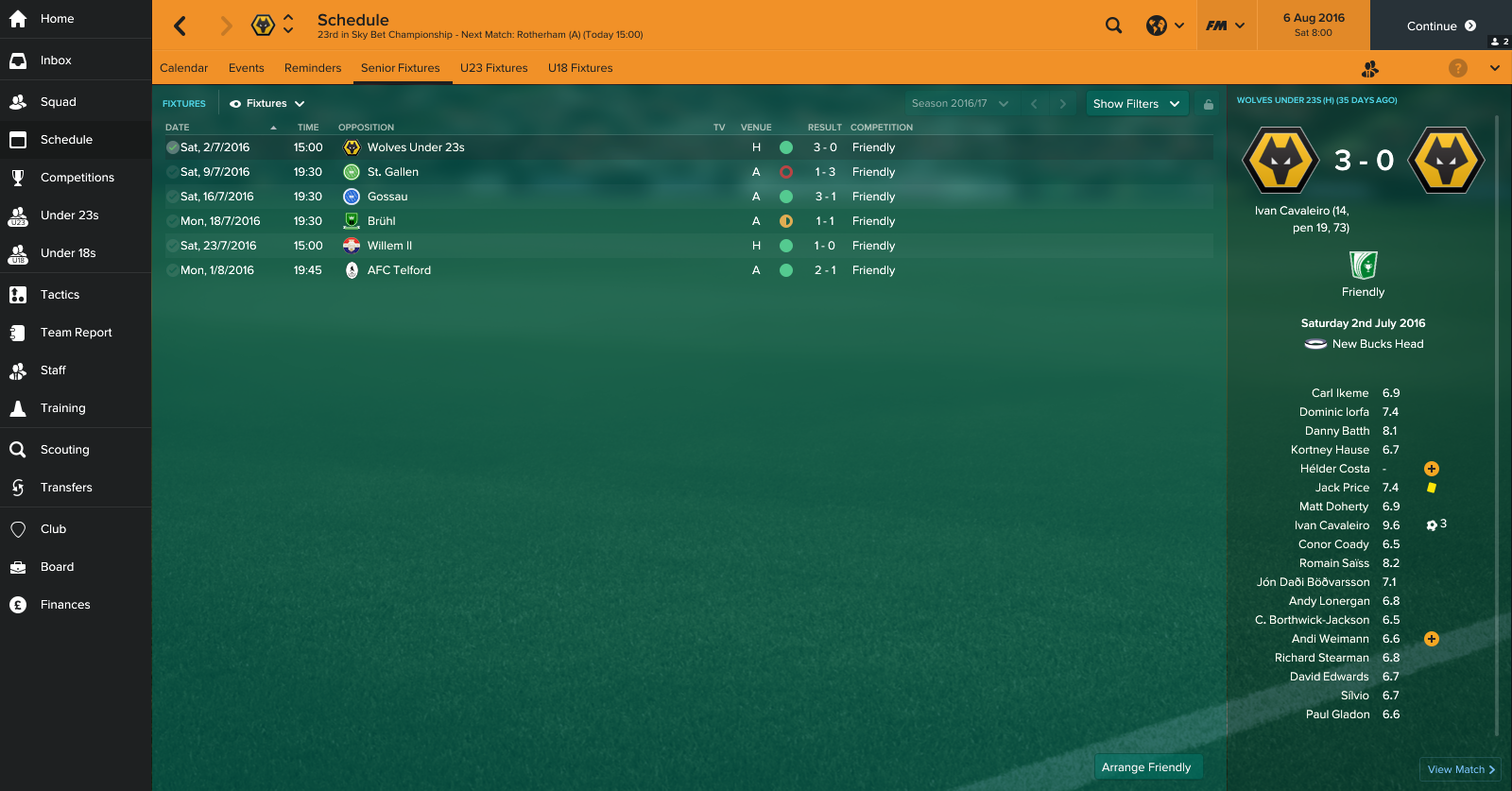 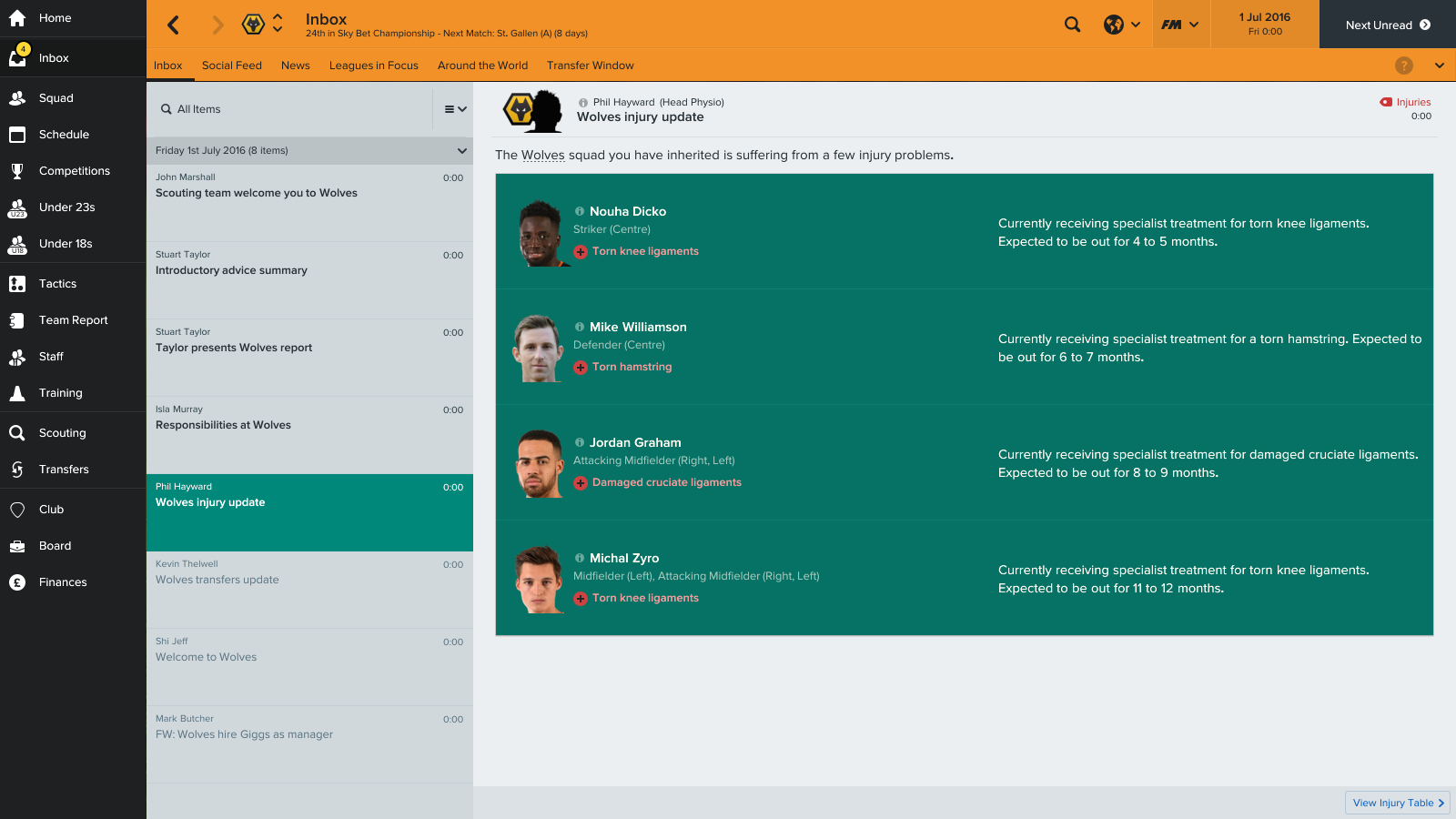 MJK46
5 years
Enzo Zidane ftw, I have almost got him to Paris FC but I don't have the cash for a loan. I hope he is amazing for you
1
Login to Quote

My Save Corrupted I am Sorry I am doing a new story, It was my fault it corrupted have resolved the issue

You are reading "Awakening a Sleeping Giant".