It was a nice warm summer evening as I sat in my local public house drinking what was on my first drink of the night, I stepped outside for a cigarette and my mobile phone rang. It was a withheld number so I did not want to answer it but curiosity got the better of me and I finally answered. 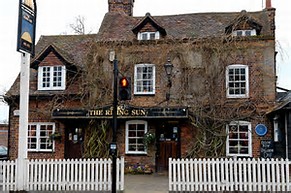 " Mr Davies, is that you came a strong Welsh accent over the phone" I answered swiftly with a simple Yes, The Welshman replied "This is Huw Jenkins chairman of Swansea City Football Club an I ..... I Cut in Gaz Piss Off I know its you ! and I started laughing. 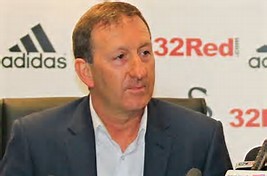 No Mr Davies this is genuinely Huw Jenkins I am outside the pub your in, Your Girlfriend said you would be here when I rang your house phone"

I stepped outside and I could not believe my eyes it wasn't a hoax or a lie and definatel;y not Gaz. Mr Jenkins invited me into his car and asked me to to go with him to Landore ( Swansea City FC's Training Complex ).

We Arrived within a few hours, Huw had already offered me The managers job after the owner Jason Levein had been on a Coaching Course I had been on, I hadn't a clue who he was but apparently he had been impressed with me. 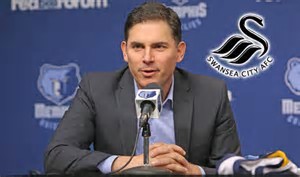 FA Level 5 (UEFA Pro)
The FA Level 5 (UEFA Pro) is the mandatory qualification for all first team managers who want to work in the Premier League. The course is delivered in a number of modules over an 18-month period.
Course application pre-requisites include:
holding a current FA Level 4 (UEFA A) in Coaching Football, with priority given to applicants holding the English FA Award;
having experience in the professional game as a player (minimum five years’ experience), player coach, coach, assistant manager, manager, academy manager or technical director;
holding a valid FA Advanced Youth Award (desirable).

I met with club captain Leon Britton and star player Gylfi Sigurdsson. It was explained to them who I was Leon and Gylfi were true gents and said they didn't mind introducing me to the rest of the Squad ! 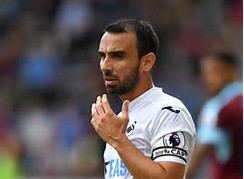 So I am now sat here in my swanky new office wondering how the hell I got here, I have just completed my first Press Conference introducing me to the World as Swansea City FC's new manager.

I have set myself 4 Targets

I'm not sure what I can achieve on this, but I know that Swansea have a great squad with many leaders. I will keep you all updates as we go.

MJK46
3 years
Great start man!!! I hope this one doesn't fail on you like the Wolves
Login to Quote

BackPostHeader
3 years
Great start and a really nice layout, it's really frustrating losing saves so hopefully this one works for you!
Login to Quote

Well today we had a guest in Harry Redknapp visit the Training Complex at Landore, I was Talking to Harry for a while trying to extract as much useful knowledge that he could give me.
After a while I asked Harry if he knew of any Defensive Midfielders without a contact that I might be able to snap up, I didn't actually expect an answer but he told me That Lassana Diarra would probably be interested in Joining as he was looking for a new club and he kept in touch with Harry since his Portsmouth days together.

The following day I managed to sign him, what a coup ex Real Madrid star signed for little old me, why ? 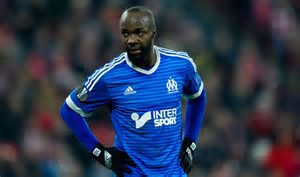 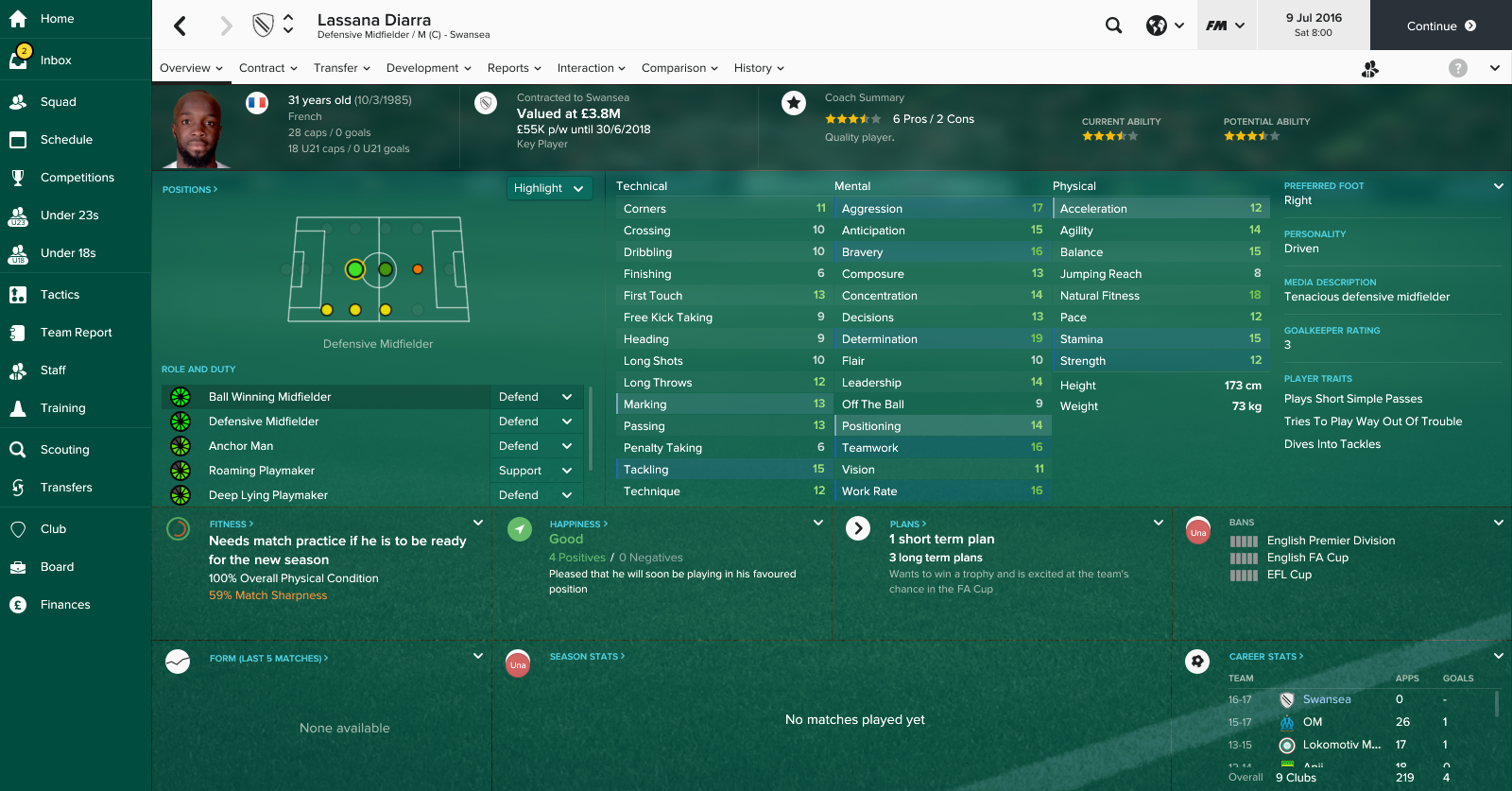 That same day I received an E-mail saying that Ronaldinho had read the contract offe that I had sent him and was willing to join up for the season. I didn't even think he would know I offered let alone sign, This kid has done it all Champions League, World Cup and now at 34 signed for Swansea City AFC. 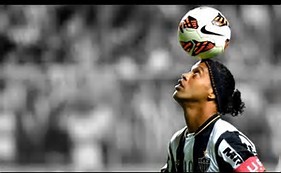 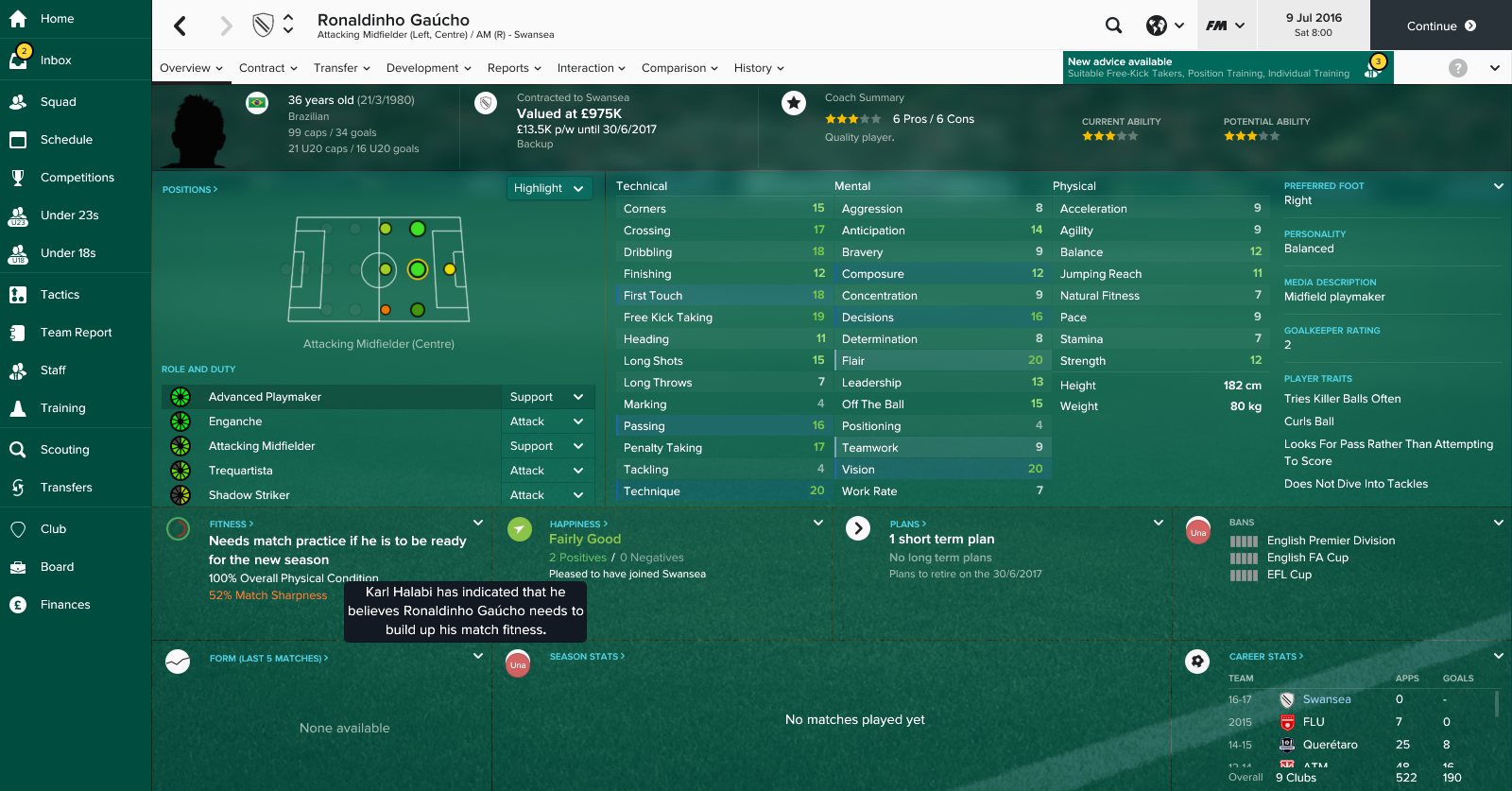 The First signing that I am actually shelling out any money for is a young Mexican striker Erick Torres, I saw him playing last season whilst I was studying my badges and he was at Houston Dynamo in the MLS, a keen eye for goal, quick feet and a work horse exactly what I was looking for to partner Fernando Llorente. I managed to get this deal done for £5.25m a snip at half the price he already has been capped for his country 4 times and has scored too. 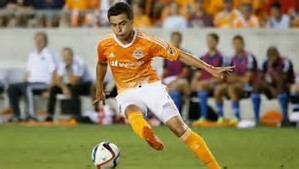 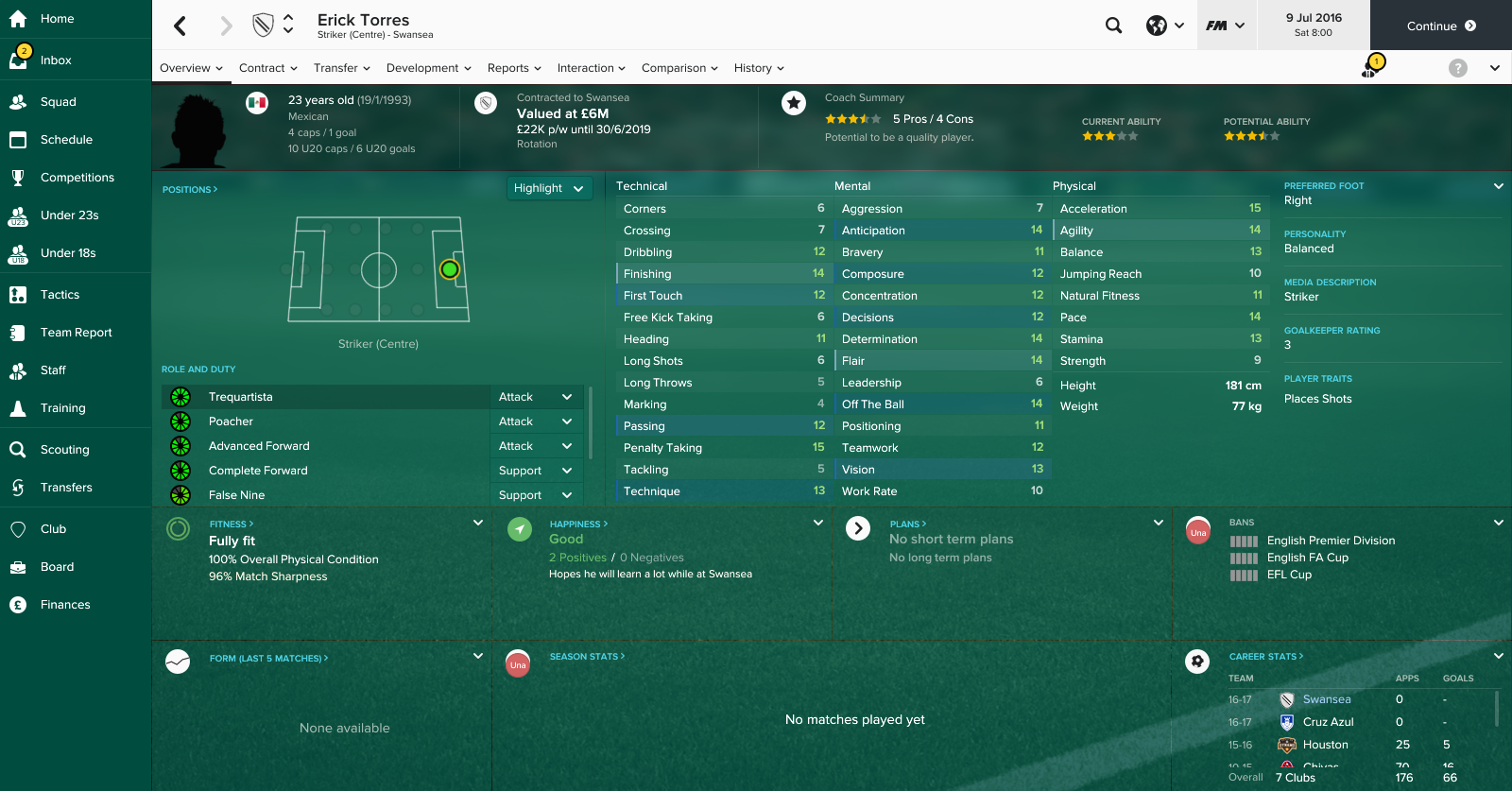 I am now about to start my first ever pre-season in professional management, so far I am loving it but my girlfriend isn't overly happy at relocating to Wales, but Llorente's wife has made friends with her and the 2 are now happy shopping together in town. I hope Fernando performs cause if I ever have to sell I am going to get a real earful at home. 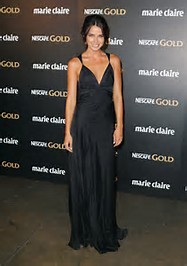 JUST SO HE CAN PROTECT YOURE GIRLFRIEND
1
Login to Quote

Well to cut a Long story short I went into the local pub near to my new house and I got chatting to a dutch lad I went to college with who goes by the name of Mr Mike! he got me very drunk on a fair few Captain Morgan Spiced Rums and dared me to by send an e-mail to Emile Heskey offering him a contract. Heskey replied instantly with it signed. So yeah there you go I have signed Emile Heskey 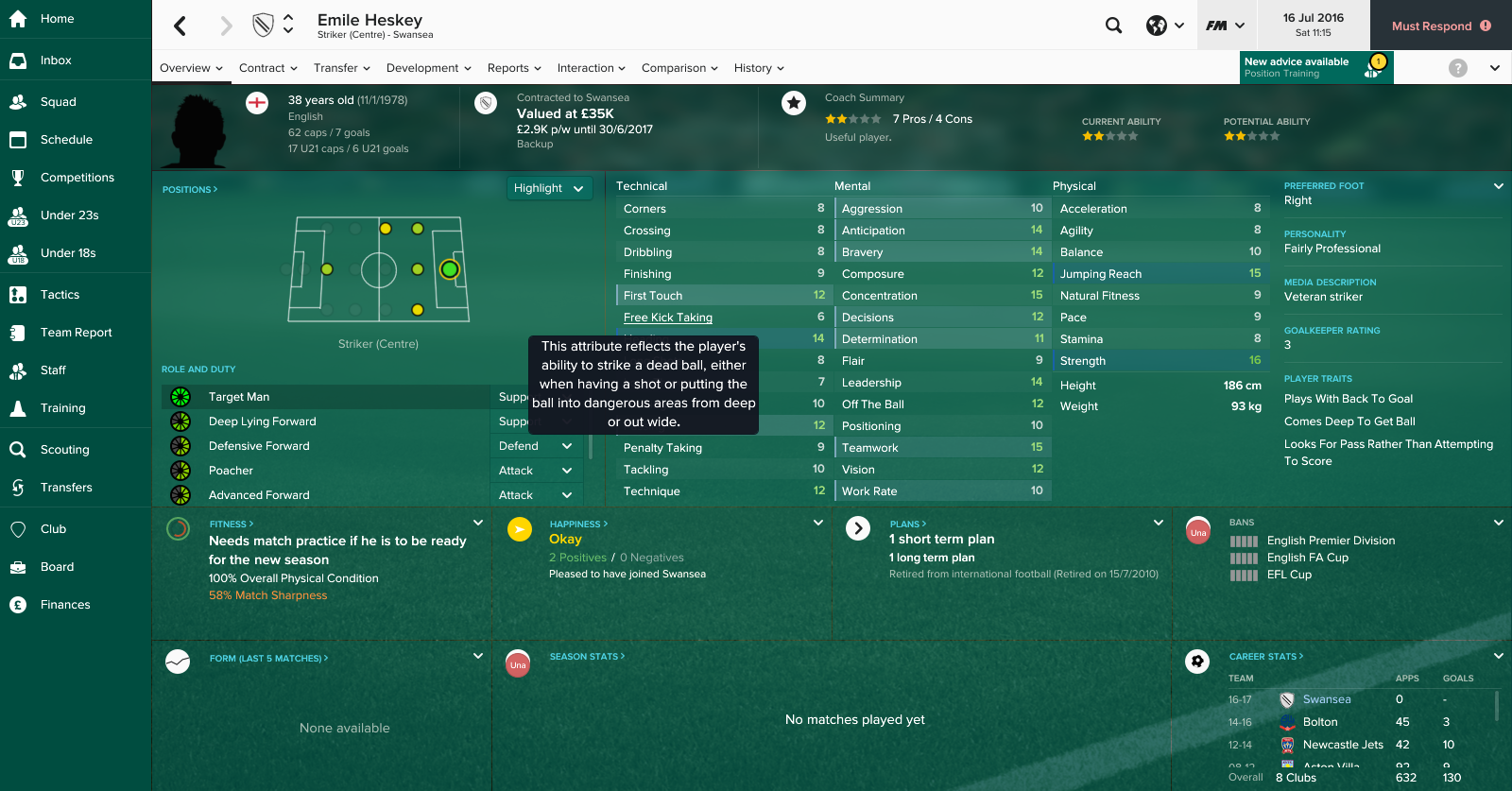 Michael
3 years
The Man, The Myth, The Legend!
Login to Quote

ScottT
3 years
Oh for god sake... why did you listen to Michael. Mistake no.1
Login to Quote

mgriffin2012
3 years
Just a few under the radar signings mate