Di Francesco: 'We Can Win the Title'

In a recent pre-season interview session, new A.S. Roma manager Eusebio Di Francesco told multiple media outlets that he believed his squad was 'strong enough' to be able to win the Serie A next season and that they would be doing everything in their power to ensure that their work produces that exact result.

This statement comes with surprise, as many people would have thought that Di Francesco would be doing serious work to enhance his squad in the break between seasons. Under management by Rudi Garcia last season, Roma found themselves in a mid-table spot before Garcia and his coaching team were sacked by the chairman, James Pallotta. Despite this, new manager Luciano Spalletti was able to lead Roma from a mid-table spot to a third-place finish in Serie A, clinching the UEFA Champions League play-off spot for the season coming. However, it was announced that Spalletti would be joining Inter Milan for the next season, leaving Roma to appoint Di Francesco to his current role at the club.

Di Francesco, 47, however trusts the squad that he has at his disposal and is ready to take on the Serie A next season, saying that all the players will have to be at the top of their games every single match to ensure that they can get the results the fans want. He also informed reporters that he was completely and utterly committed to A.S. Roma and wanted to ensure that the Giallorossi had the success that they deserved to have.

But who is Eusebio Di Francesco, exactly? A versatile, forward-running midfielder who helped Roma win their last Scudetto in 2000/01 under Fabio Capello, Di Francesco won 12 caps for Italy. He soon began a promising coaching career: he was appointed by Virtus Lanciano in 2008, then Pescara and Lecce. He made a name for himself at Sassuolo, guiding the club to promotion from Serie B in 2013 before steering the Neroverdi to an unlikely UEFA Europa League group stage appearance last season.

A.S. Roma President James Pallotta said: "With Eusebio's style of play, we believe he's the right fit for Roma and can lead the club to success in the imminent future. He also will help bring through some of the great young talent coming out of our academy."
Hey everyone! Some of you may remember me, some of you may not. Nevertheless, my name is Starlord and I welcome you to: AS Roma - The Roman Legion. I hope you're all as excited to read this as I am to present it to you.

mgriffin2012
5 years
A good start man! Hopefully you can keep hold of Antonio Rudiger who is being linked with Inter irl!
1
Login to Quote

Starlord
5 years
Justice - Thanks for the support man, I appreciate it!

mgriffin2012 - I'll do my best to keep a hold of him. The potential on that man makes it crucial to keep him.
Login to Quote

ScottT
5 years
Great start mate, I'm looking forward to this as Roma are an interesting team to manage. Good luck.
Login to Quote

A full comprehensive squad report from the A.S. Roma manager Eusebio Di Francesco and his coaching team prior to the season ahead. It highlights the main strengths and weaknesses of the squad, along with an insight into the team's chosen tactics in the upcoming campaign. 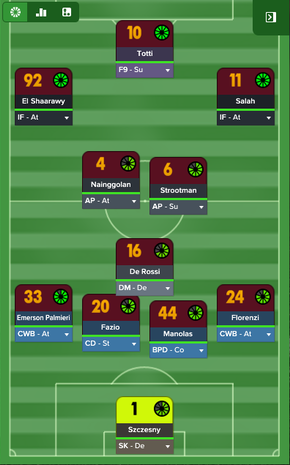 This is the main tactic that Roma will be using throughout the Serie A campaign.

It is a 4-3-3 style tactic that mainly focuses on allowing the players to take control of the game and play their way, while also keeping a solid backline of four players in the defence to protect from any counter attacks. The defensive midfielder is the vital role in the tactic, for it is that role that stops and starts a lot of the plays that come from the team.

This tactic was made the Reckonist. Shout out to him for it. 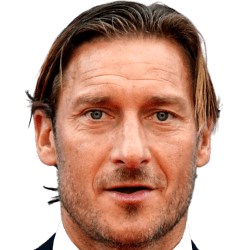 Despite his age, Francesco Totti will be a mainstay in the A.S. Roma team for what could very well be his last season in the game. Also having the role of captain of the team, Totti will be there to not only score goals, but to lead the team on the pitch and make sure they work as a cohesive unit. 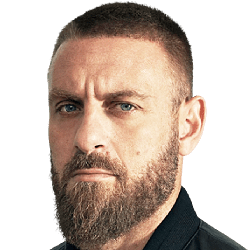 The vice-captain will be the glue that holds the midfield, and even the entire team, together during the campaign's matches. Holding the defensive midfielder role, De Rossi will be the anchor man of the team and dictate the flow of play whenever and wherever he can on the pitch. 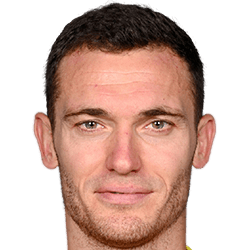 Despite only being on loan from Spanish giants Barcelona, Thomas Vermaelen is a solid defender and will be a mainstay in the team's defence. Working alongside the likes of Federico Fazio and Kostas Manolas in the defence, he will hope to stop the play and make sure the goalkeeper is well defended from all possible attacks from teams. 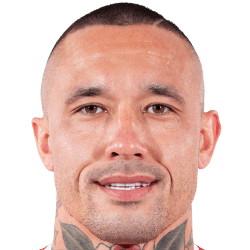 A solid rock in the centre of midfield, Radja Nainggolan will be looking to put in great performances in the middle of the pitch. Backed up with the likes of Kevin Strootman, Daniele De Rossi, the on-loan Clement Grenier and the young Gerson, Nainggolan will have to control the ball and make sure the passes go smoothly and the ball is played to the front. 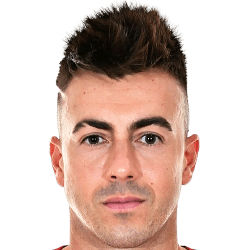 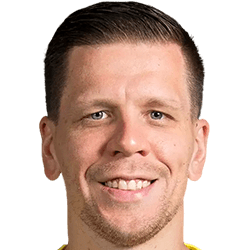 On loan from Arsenal, Szczesny fills the gap between the sticks that the Roma team desperately needs. With young Alisson as his back-up, Szczesny will be the final line of defence for the team, defending against the opposition scoring goals from all angles. 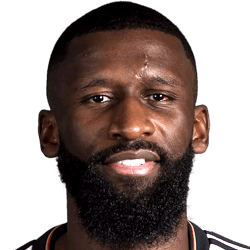 A young German talent recently signed from a loan from Stuttgart, Rudiger has been touted as one of the top young talents in Roma's squad this season and could potentially challenge the likes of Vermaelen, Fazio and Manolas for a spot in the first team as the season progresses. 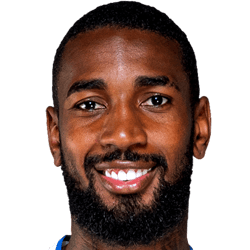 Despite only being 19 years of age, Gerson looks to be one of the top young talents in the squad. Currently being tutored by none other than Radja Nainggolan during squad training, Gerson looks to be a firm back-up to the likes of Strootman, Nainggolan and Grenier and could break into the first team next season for sure, if not this season.


Thanks for the support. I've always liked Roma, I don't know why though. Hopefully I'll be able to bring them success.
Login to Quote

mgriffin2012
5 years
A strong squad but one I fear may be aging so bringing in some young prospects could be vital!
Login to Quote


Youth is extremely important right now, I agree. With arguably my top defender (Vermaelen) being 30, my captain being 39 and vice captain 32, it's time to look for younger players to fill the gaps that they will leave when they retire.
Login to Quote 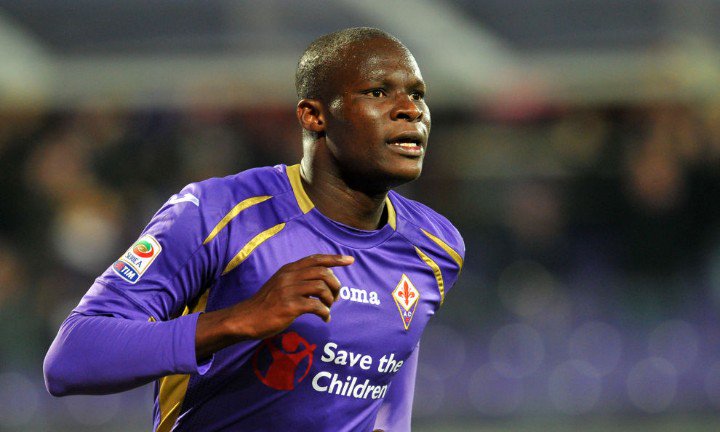 Today, it was announced that Serie A side A.S. Roma had completed the transfer of Senegalese striker Khouma Babacar to the club from fellow Serie A side Fiorentina. The club also confirmed that Babacar had signed a four year deal with them.

Born in Thiès, Senegal, Khouma Babacar began his career in the academy of US Rail in his hometown. Two years later, aged only 14, he moved to Italy and signed with Delfino Pescara 1936 after a successful trial. In July 2008, Babacar signed with another club in the latter country, ACF Fiorentina, after also being tracked by another Serie A side, Genoa CFC. In the 2009–10 season he began training with the first team, coached by Cesare Prandelli.

On 14 January 2010, at the age of 16 years and 10 months, Babacar made his official debut for the Viola, starting against A.C. Chievo Verona for the campaign's Coppa Italia and scoring the 2–2 equalizer in the 75th minute of an eventual 3–2 home win. On 20 March he scored his first league goal, netting the third in a 3–0 home success over Genoa.

The signing is no doubt a boost for the Italian side, with Babacar joining the ranks as a rotation player behind Edin Dzeko and Francesco Totti. Being only 23 years old, this also helps the potential age crisis that Giallorossi could be dealing with in the near future, with Francesco Totti turning 40 soon and vice-captain Daniele De Rossi nearing 33.

The transfer, rumoured to be around the price of 8.5 million, was brokered by Roma manager Eusebio Di Francesco, Director of Football Frederic Massara and the player to include a 46.5k per week contract.

Babacar's transfer also marks the first signing for A.S. Roma under the era of new manager and former player Di Francesco. Signing a four year deal means the Babacar looks to be possibly the cornerstone of Di Francesco's reign at Roma, his young age coming into play when talking about the future of the club. With the help of players like Francesco Totti, however, it is hoped that Babacar will reach the potential that he has been touted with and will help A.S. Roma with their Serie A campaign.
Login to Quote 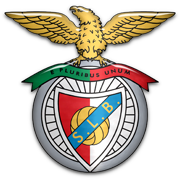 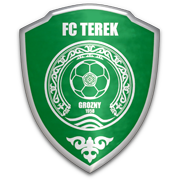 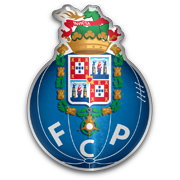 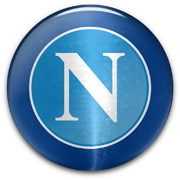 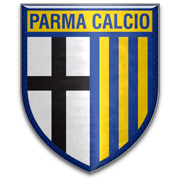 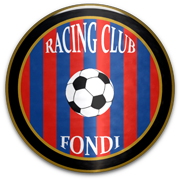 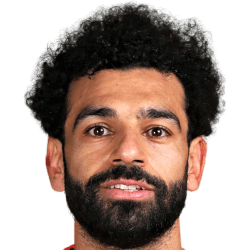 Mohamed Salah takes the award for the best player of pre-season, scoring 3 goals in 6 games and taking an average player rating of 7.1 out of 10. 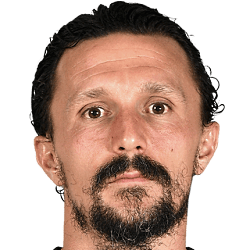 Antonio Rudiger - Rudiger is currently receiving specialist treatment for damaged cruciate ligaments. He expected to be out of action for between 6 weeks and 3 months.

Mario Rui - Rui is, like Rudiger, also receiving specialist treatment for damaged cruciate ligaments and is expected to be out of action for around 3 to 4 months.
Login to Quote

Justice
5 years
A very good pre-season, hopefully you can carry this form in to the competitive fixtures!
Login to Quote

ScottT
5 years
Not too bad in pre-season there, as Justice says, let's hope you can transition that in to the season. Also, just a little typo I noticed... you've put 'SLB' instead of 'Tepek.'

Starlord
5 years
Justice - Hopefully I can, but we'll see. There's a lot of very good teams in the Serie A.

ScottT - Aaargh, there's always something you miss, isn't there? haha. But yeah, hopefully I can do my best and get the results.
Login to Quote

mgriffin2012
5 years
Very good pre-season and hopefully Khouma Babacar can do the goods for you, i've never got on too well with him on FM but fingers crossed!
Login to Quote

You are reading "AS Roma - The Roman Legion".