ninjaskill
4 years
Roma would be an interesting move, could have a solid shot at Juve in a season with no European football if you could keep all the players happy
Login to Quote

Roma sit in 10th in Serie A
28/03/17
Louis van Gaal has officially been unveiled as A.S. Roma's new first team manager at the club's headquarters in the Italian capital. The decision sees Alessandro Pane officially step down from his role as interim manager and rejoin the club's backroom staff.

Van Gaal will step into his first role in management since leaving Manchester United last May and boasts one of the more impressive resumes in world football, winning a Champions League with Ajax and managing Barcelona and Bayern Munich at different points in his career. Roma will be his first venture in Italy, after managing in Spain, Germany, England and Holland.
http://e1.365dm.com/16/05/16-9/20/louis-van-gaal-manchester-united-fa-cup-final_3470915.jpg

Van Gaal's last match as manager saw his side lift the FA Cup
Roma President James Pallotta was pleased to seal the deal during the international break, with Roma set to take on Chievo in 5 days time.


James Pallotta:"We're very pleased to announce that Louis van Gaal will be Roma's next manager. Louis has signed an 18-month contract with the club, and we look forward in earnest to the end of this season and the beginning of the next. Louis is a man who has the ability to make positive changes to a football club, and I anticipate he can do just that here at Roma.

Journalists watched as van Gaal signed the deal, securing him to the club until June 2019. It is believed that the Roma board will not judge the 65-year old on his league position this season, but Champions League football will certainly be on the agenda in 2017/18.

Van Gaal inherits a squad with underperforming talent, including Edin Dzeko, Daniele De Rossi and Stephan El Shaarawy but the Dutch boss will likely be looking forward to work with the likes of Mohamed Salah, who has had a very strong season thus far.
http://romapress.us/wp-content/uploads/2016/12/IMG_8926.png

Roma have a large number of loaned players this season, including Thomas Vermaelen and Mario Rui
Roma have confirmed that the new appointment will front up to the media tomorrow ahead of the side's clash with Chievo.
Login to Quote

De Magere
4 years
What a side to manage. Looking forward how Roma will do under van Gaal.
Login to Quote

ScottT
4 years
Looking forward to LVG turning the ship around, as it is likely to happen! A lot of talent, young and old within that squad.
Login to Quote

Totti: This Season Will Be My Last

Roma legend Francesco Totti has announced he will retire from football at the conclusion of this season, retiring as a one-club man with over 600 appearances in the maroon and gold. The 40 year old has played an active role in the squad this season but has chosen not to play on.

Totti broke the news at the same conference that announced Louis van Gaal as the club's manager.


Francesco Totti:"Its with a heavy heart today that I announce I will be retiring from the game at the end of the season.
I began my incredible journey with this club when I was just 12 years old, and since then, I have had no regrets with playing for just one club my entire life. Roma is my home.

Over the last few seasons, my effectiveness as a player has continued to diminish, and I have now reached a stage where I no longer wish to be a burden on my teammates. I know I have the ability to play elsewhere but I wish to finish my career as a one-club man. Part of the agreement which saw me continue to play this season is that I will join the backroom in some capacity, and I look forward to working with Louis, and seeing what he can accomplish at the club.

My timing for this announcement may be seen as suspect, but I can assure you, the appointment of Louis is not the driving factor in my retirement. I decided I didn't want Louis to have to worry about my future, what I was doing, where I was going. I want to put it all on the table.

I don't wish to take any questions, I've had 25 years to do that. I just want to wish the club the best moving forward, and I hope I get to see unheralded success at the club in the coming years. Thankyou. Totti's crowning achievement was the 2006 World Cup
Login to Quote

Justice
4 years
No Totti No Party </3
Login to Quote

De Magere
4 years
Offer him a role in the club!
Login to Quote

ScottT
4 years
The end of an iconic era. </3
Login to Quote

The following is a transcript from the official A.S. Roma website
29/03/17

You must come into this club with an ambition, a set of goals. Do you feel as if the board matches your ambition?

Absolutely, if anything I'm the one having to keep up with the board's ambitions. We know the club needs to improve in a number of ways, and so we'll start going through the processes from day one.

Roma have been a top 3 side for the past 3 seasons, and you have a squad filled with talent such as Mohamed Salah and Kevin Strootman. Yet, the club sees itself in 10th place. You must be hoping to change that?

In the end, trophies are what a manager is based off. That might be ironic coming from me, after being sacked two days after winning the FA Cup, but fundamentally its true. I need to get the best out of these players, otherwise, what good is having a manager at all?

How will youth factor into your plans at the club?

I'm looking forward to working with some fantastic prospects at the club, but at the same time, we have to focus on getting results on the pitch. So, I don't think I'm going to start sacrificing the playing time of the first team squad for youngsters, but they may get opportunities. 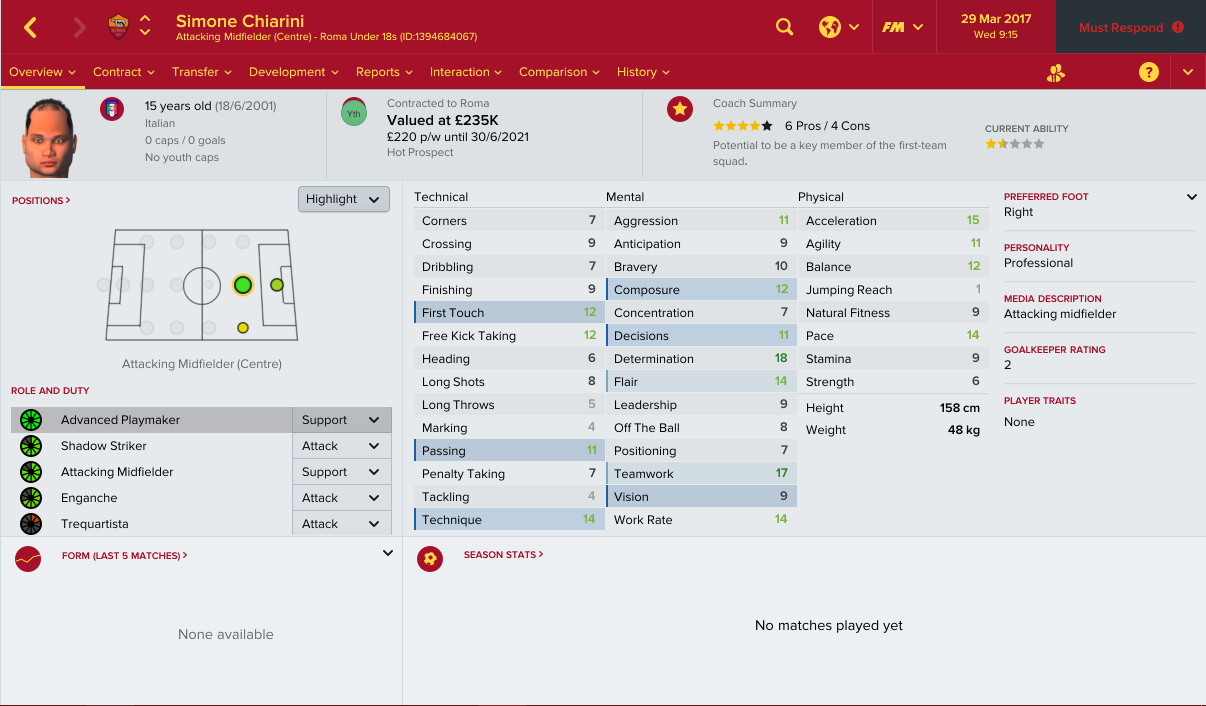 Roma's Simone Chiarini has been touted as a star for the future
New managers bring about times of upheaval and some at the club might fear for their jobs. Will there be many changes?

I have the luxury of coming into a largely empty backroom, so I don't feel like I need to sack anyone. I can simply employ people in empty positions.

You take charge of the club at a time when Kevin Strootman is in high demand; do you think you'll be able to hold onto him?

As a manager, you have to juggle the conflicting demands. The player may want to leave, and I have to ask myself, do I want someone in the team who doesn't want to be there. You also have to think of the club's finances in an instance like this too. In the end, I'd love to work with Kevin but if he wants to go, I can't really stop him. 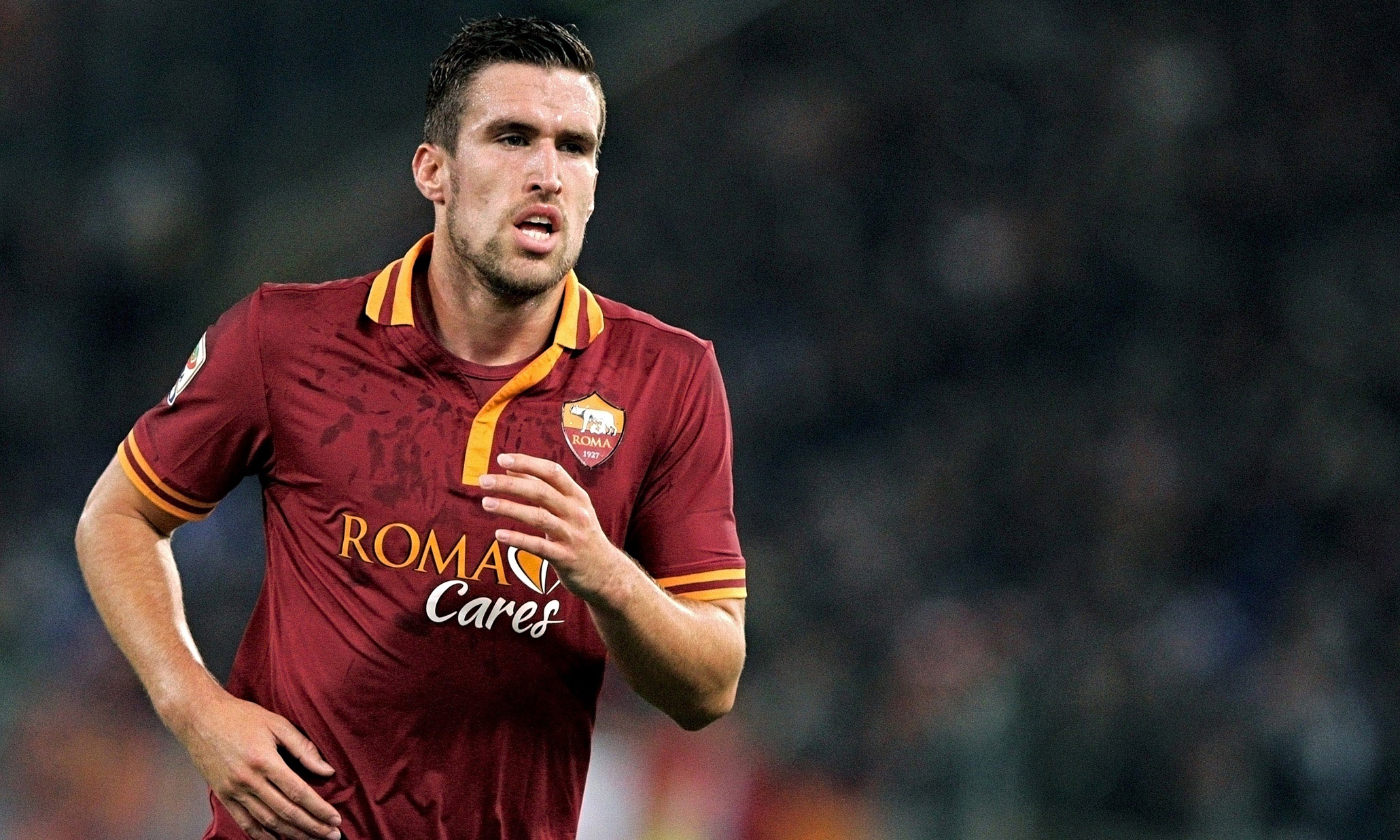 Roma's Kevin Strootman is being heavily chased by Barcelona
The club is out of the running for domestic silverware but you still have a chance in the Europa League. Do you consider success in this competition to be beneficial?
http://statsbomb.com/wp-content/uploads/2016/08/spurs-16.jpg

Roma face Tottenham in the quarter finals of the Europa League
Definitely. We obviously stil have priorities in the league but we know that the Europa League is an opportunity to bring success to the club in an unenjoyable season. We'll take the competition as it comes and weigh up each week whether or not we place priority on our league fixtures.

Critics have said that Roma's finances aren't enough to attract the kind of world quality players we see at clubs such as Juventus. Will you need a larger budget to compete for Serie A?

I tend to disagree with that sort of reasoning. I don't think I need to spend millions upon millions necessarily to get results; obviously occasionally you find a player you know will make an impact but I don't want to endanger the club's finances spending willy nilly. If we can improve our play on the pitch, we can match it with the most expensive teams in the world.

Where did it go wrong for your predecessor Luciano Spalletti?

I feel as if Luciano came into the job with a bit of complacency because, of course, it is his second spell at the club. But football can change a lot in seven years, and he's been managing in a league which is a lot less reputable. To come back into the Serie A without a strong philosophy was bound to result in bad form, in my opinion. I don't intend on making the same mistakes.

Do you have confidence that you can bring results up from the start?

I think to expect instant change is naive, and I've been in the business too long to believe we can instantly turn things around. The players will take time to adjust to my systems. That being said, I do believe my system can be effective from the get-go, it just won't be world beating straight away.

What are the board's expectations of you for the rest of the season?

The board has been very realistic with their demands, and we've understood that next season will be where I begin to be assessed more thoroughly. This season, we'll try and finish respectably and hopefully challenge for continental silverware. I have an assurance that I will have a couple of months to prepare before I hit the ground running this summer.
http://i.dailymail.co.uk/i/pix/2014/06/03/article-2647232-1E696C0700000578-641_634x377.jpg

ScottT
4 years
A great introduction from LVG. Keeping Strootman could be very difficult now that the club have done so poorly, but hopefully you'll have enough money to perhaps tempt him to stay and give you a chance. I feel next season will be an entirely different ball game.
Login to Quote

Justice
4 years
Hopefully Strootman will stay committed to the club and decide against leaving, he's an important player!
Login to Quote

Dutch footballing icon Marco van Basten has joined Roma's backroom staff, becoming Louis Van Gaal's assistant for the rest of the season. The 50 year old's last role was as assistant manager of the Dutch national side, and he has been manager of the side in the past, as well as Ajax, sc Hereenveen and AZ Alkmaar.

De Magere
4 years
What an interview with the big man himself. He is busy so it seems! Hopefully all the changes will pay out in the end.
Login to Quote

You are reading "Louis: The Last Leg".