Zidane: It's A Historic Day For Madrid


The 2016/17 season:"Nobody has won two Champions League in a row and we did it. We can say that it is a historic day for everyone at Real Madrid, for me, for the players, for our families... But at the same time we know that next year is going to be much more difficult and we will have to work harder. We are a very good team and we deserved to win the league and the Champions League, it's not been an easy job.
There’s a lot of talent in the squad but, in the end, it’s been down to a lot of work. That was the key. When you realise that you can get things working hard, you can do it. I am very proud of everyone. The key has been that everyone has chipped in. We can’t change that and that has been the success of this year."

The final:"The first half was even. Juventus came out strong. We didn’t have possession. The second half was better. I told them to continue with what we were doing, but putting more pressure on them and playing with more width. But also playing our game, because we know how to play. Scoring four goals against Juventus is not easy." 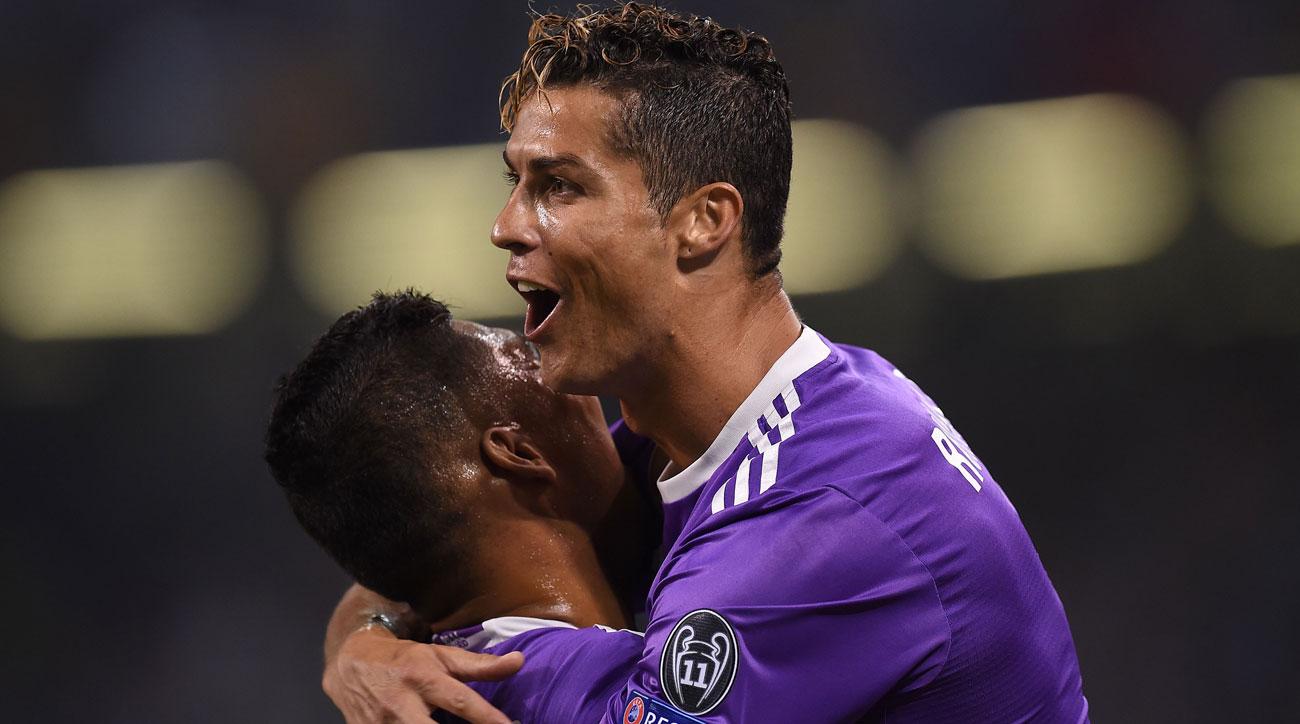 The work of the coach:"I’m a part of this team. The key to success is that everyone has felt important this year and they’ve all given everything. The team spirit has been incredible. There's a lot of work gone in to that."

Enrique Bows Out In Style

http://images.indianexpress.com/2017/04/luis-enrique-m1.jpg
Usually, on any other night, Luis Enrique would stand unmoved when Barcelona fans sang his name.

Just this once, though, he allowed himself a second’s applause. A thank you from him to them - after three years in which they have had plenty to thank him for.

Ernesto Valverde will, barring the biggest of surprises, be announced as Barcelona’s new coach on Monday, and he has some considerable zapatos to fill. While Luis Enrique’s departure is mutual, and seems to be a big relief to the coach himself, Valverde and Barca must be quietly concerned about how exactly they go about the next step.

It was fitting that the Asturian should leave the club in a blaze of glory, even if the Copa del Rey provides scant jubilation when sandwiched between Real Madrid’s La Liga win and Champions League final.

And it is halting Madrid’s creeping return to dominance that will be Valverde’s first and most important task.
http://i2.cdn.cnn.com/cnnnext/dam/assets/160104164534-zinedine-zidane-1-super-169.jpg
Zinedine Zidane has steered Madrid back to the top by expertly man-managing and rotating a squad that is phenomenally strong and deep. Barcelona tried to do the same but could not get the performances out of fringe players that they envisioned.

Valverde will buy, of course, and he has already pinpointed the likes of Hector Bellerín and Ander Herrera as targets but both are difficult deals to make happen. It’s fine aiming high, but working with Barca’s sporting director, Robert Fernandez, he will soon also realise that he needs to be realistic. During his reign, the club will have to find heirs for Andres Iniesta, Javier Mascherano and Lionel Messi. Rather you than me, Ernesto.
http://www.hindustantimes.com/rf/image_size_960x540/HT/p2/2017/05/29/Pictures/files-fbl-esp-liga-athletic-coach_391e0644-449a-11e7-9f7a-23d54b55bc46.jpg
Barcelona do have cash to spend, but they must spend it better than last year. Valverde may even get better performances out of the likes of Andre Gomes, Aleix Vidal and Paco Alcacer but he will soon learn that it is not just on-field performances that matter.

The Camp Nou club is plagued by the internal politics that wore down Luis Enrique. They will be another obstacle for Valverde and one that, for all the coaching experience gained elsewhere, he can't ever be adequately prepared for.

For Luis Enrique, his next job will define his career far more than his tenure at Barcelona.

There were occasional grey skies over his time, with the most notable period of pressure on him being released by the departure of Andoni Zubizarreta as sporting director in January 2015 and the second by his own resignation earlier this year.

But more often those clouds were filled with showers of confetti. Nine trophies won out of the thirteen competitions Barcelona entered in his three years, a run of success only bettered by Pep Guardiola and Johan Cruyff.

"I don't feel bad leaving: there is no sadness, just total joy," he said, seemingly liberated by his decision to walk away. "I'm the one who decided that it's best to stop now. It's the right time for me and for the players.

"Due to the intensity with which you have to live this profession, there's a lot of wear and tear, so it's not a shame [I'm leaving], the opposite."
http://media2.intoday.in/indiatoday/images/stories//2017May/luisenrique_052817082800.jpg
"And if someone told me I would win nine trophies out of 13, I would have been delighted. I have received 100 percent from the team and I have given them 100 percent, too. I don't think anyone can knock me in that regard."

On his future, Luis Enrique jested that he is "open to any possibility, even coaching in another sport," but his immediate future will be spent with his family, taking time off and decompressing after an intense three years.

Indeed, as his team celebrated with the trophy and danced around the Calderon turf, Luis Enrique walked his young daughter around, holding her hand. They were deep in conversation, making plans for their new abundance of free time together.

"I usually am organised but for now I have absolutely no plans whatsoever," he said earlier this week. A control freak who is revelling in the empty calendar that awaits him.

Eventually he will get back on the management horse, and possibly in England, but perhaps Barcelona have all too easily allowed a coach - who the history books will remember as one of their most successful ever - to walk away.
Login to Quote

http://media2.fcbarcelona.com/media/asset_publics/resources/000/006/493/original/QM3D0371.v1321462556.jpg
Yet another season had drawn to a close, and for Futbol Club Barcelona, it was a comparatively fruitless year. Sure, the trophy cabinet was two spaces closer to capacity, with the addition of the Spanish Super Cup and the Copa del Rey, but in such a high-stakes environment, no one brags of such trophies. It's Santiago Bernabeu that's looking better for its La Liga and Champions League trophies.

It is my philosophy, and that of many others, that although Luis Enrique was undoubtedly an able coach, he relied too heavily on the performances of 'MSN' - Lionel Messi, Luis Suarez and the Brazilian maestro, Neymar. This trifecta won us a historic treble last season, sure, but when they were troubled in 2016/17, when players were absent and our depth was tested, we simply weren't up to the mark. Players like Paco Alcacer, Andre Gomes and Aleix Vidal were simply nowhere near the quality of Alvaro Morata, Isco and Danilo, and in the end, I wasn't all that surprised that Real Madrid ended up on top.

But now, Enrique had gone, leaving as one of the most decorated managers in Barcelona history despite his short tenure, and for all his shortcomings, he certainly got the best out of a very, very talented forward line. From what I'd heard, Ernesto Valverde was almost guaranteed to come across from Athletic Bilbao to take the job, and I hoped he, along with the transfer committee, would stop signing expensive backups like Alcacer and Gomes and start backing youth like Carles Alena and Sergi Samper. Already, we'd seen Sandro go to Malaga and play well, and it just seemed like Barcelona was heading further and further away from its La Masia roots. I hoped, for the sake of the club, that past would be embraced again.
Login to Quote

De Magere
4 years
Another good build up, hopefully you will continue.
Login to Quote

You are reading "The Modern Classic".